For discussions about bikes and equipment.
Post Reply
95 posts

And while we are nit picking, that wall isn't the best. It has clearly been the subject of a hasty rebuild in the past and speed has got in the way of quality.

PH wrote:Very nice, both the bike and the scenery. I'd noted your previous mentions of a Spa Audax but hadn't realised you'd gone posh with the ti version. Hope the gearing works out for you, though wouldn't for me, triple and a closer cassette are still me preference.
Only thing I might change on that is the rear light cable, seems to go a long way round, maybe you had your reasons, but other than wanting to use up a whole bag of zip ties I can't think what they'd be

Thanks. I am still very much a rohloff fan and my Thorn will do pretty much everything I ask of it. However, last year I was getting stale with my day rides and decided to try and build something as different as possible from my Thorn. Ok I could have gone more extreme but I decided drop bars, Ti rather than steel and a derailleur to achieve a lightish build. I backtracked a bit in the name of practicalityby adding mudguards and a dynohub.

Knowing nothing about derailleur gears I decided to go with standard 105 compact as this seemed to be what the majority of bikes are using. However, I quickly realised that I clearly don’t do standard and many of the high gears were ornaments. It particularly annoyed me having to switch from 50 to 30 teeth rings on the undulating terrain in south Cumbria. The sub compact seems to have solved that problem. I’ll give the gearing a go and if doesn’t work out then a triple will be the next option. I’m still riding the thorn for loaded rides so the new gearing should be fine at the bottom end.

Good spot about the lighting! I was not intending on using it much at night so I just got a cheap set up. However, it is proving useful so when something breaks I’ll replace it with a SON, better quality lights and think through the cable routing!

The Spa has achieved my purpose of building a different bike to the Thorn. Without consciously changing my riding style I find the average speed is about 2mph higher. The audax is certainly a nice light frame and I like the traditional looks. I contemplated an elan but decided I would be tempted to build it into a full tourer and end up with something quite similar to the thorn, and it is a bit more cash. I wouldn’t be without the thorn and a rohloff for everyday riding and load carrying, it is more comfortable and takes no maintenance.
Top

pwa wrote:And while we are nit picking, that wall isn't the best. It has clearly been the subject of a hasty rebuild in the past and speed has got in the way of quality.

that’s austerity for you!
Top

Agreed, and I'll raise your black Carradice with a Carradice Classic Saddlebag Rack, the new and improved version of the old Karrimor Uplift.

Instead of just untidily dangling from the saddlebag loops, a saddlebag fitted to that rack instantly makes the whole bike look twice as good and much more purposeful, and must be worth at least an extra 0.25mph in average speed.
Top

geocycle wrote:The Spa has achieved my purpose of building a different bike to the Thorn. Without consciously changing my riding style I find the average speed is about 2mph higher. The audax is certainly a nice light frame and I like the traditional looks.

Yes, it's nice sometimes to have a different bike just for the variety. The only disadvantage I find is if I've spent a lot of time on the Rohloff I takes me a while to remember you can't always change derailleur gears when you want to.
Top

The first time I wrecked my rear wheel on the old frame, I borrowed a friend’s wheel which happened to have a genuine 35 mm tyre. That fitted fine without a mudguard. However, the carbon fork won’t take more than a 28 mm tyre with reasonable clearance. Maybe I’ll eventually get a nice steel fork with more clearance, but that isn’t a priority now. They seem to cost about a hundred quid.

One of the reasons I avoided Spa as there was no guarantee of even getting 28mm tyres in with guards. I ended up with a s/h Sabbath September and managed to locate a full carbon mudguard carbon fork that will actually take a 31mm tyre (a 28mm Panaracer on a wider rim) and there been enough space under a mudguard which is very pleasing.
https://www.sjscycles.co.uk/forks/tifos ... h-eyelets/
helped by the 'cut out' at the top of the fork.

Samuel D wrote:It’s fun to see the various builds that people have done with the Spa Audax frame. Feel free to add to this thread with your own!

Since mine is finally in 'summer mode' seemed about time to share some more up to date pics, please ignore the 'party time' flag, it's was a club-mates birthday so we all attached a flag for the last ride for her. 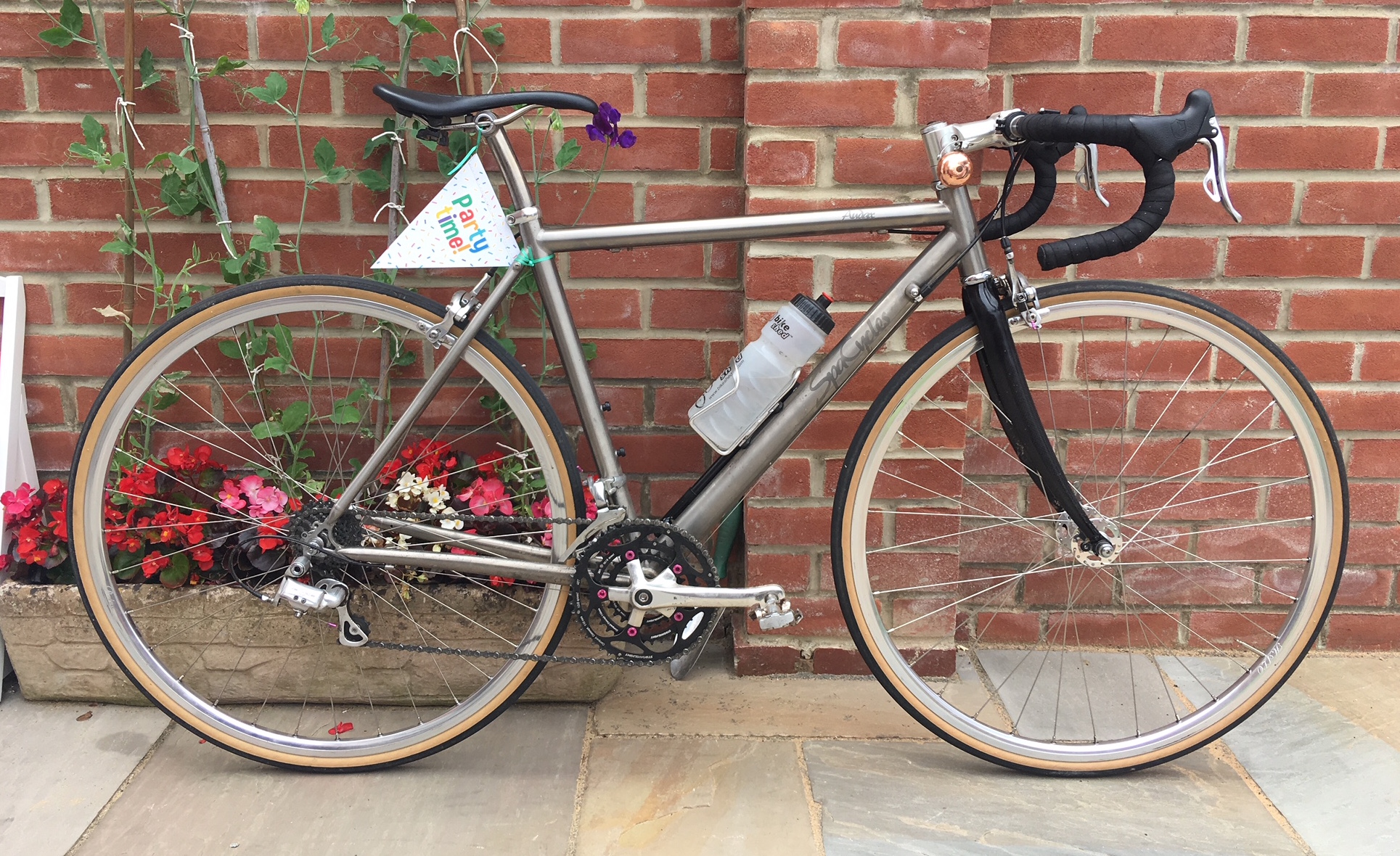 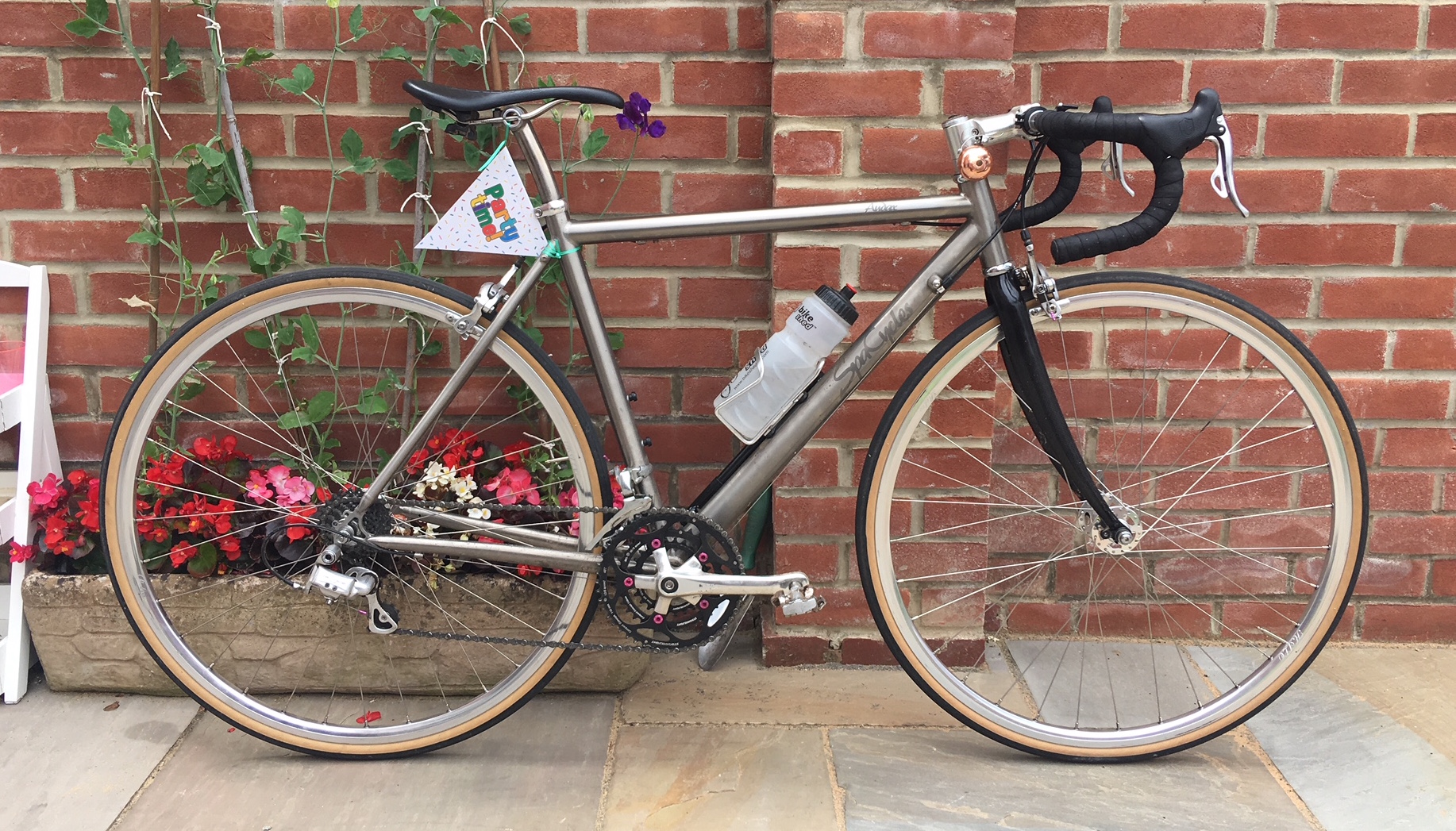 What are the rims and tyres?

(The difference between the two photos is too subtle for me.)
Top

What are the rims and tyres?

(The difference between the two photos is too subtle for me.)

Thanks, its built for me and that's what matters

The rims are Halo Retro rims, was looking for some polished silver rims *without* a machined braking surface and they were pretty much the only ones I could find, pleased with them so far, unusually for me I bought them as a complete wheelset as I ususally build my own, but the build quality is acceptable and the hubs are pretty decent as far as cartridge bearing hubs go...

I only meant to link to one photo, my mistake!
Top

Belated thanks, if not already given, to all those who helped me resolve the 'tinkling spoke' problem I had last year. The bike is now almost finished:-
1. I ought to cut down the steerer - although now 71 years old I didn't need quite all the spacers!
2. The cassette is a 9 speed 11-32 HG50 and the HG200/HG201 has a better spread of gears in the middle range, so I'll probably get one of those.

This is a 56 cm Spa Ti frame sold as a clearance item last year. Wheels, brifters, brakes and rear derailleur are from an old Dawes Audax, 2000 model. Tyres are 25 mm Schwalbe Ones, Chainset is a Spa TD-2 with 48-38-28. Saddle bag is a 20 year old Nelson rejuvenated by a good clean with a vacuum cleaner. 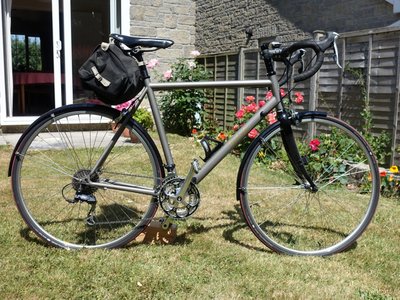 Very good, NetworkMan – except for that bottle cage! I think its fat, swoopy obvious plastic-ness detracts from the metal bicycle. A neat metal cage like amediasatex’s would look better to my eye, whether in silver or black.

Samuel D wrote:Very good, NetworkMan – except for that bottle cage! I think its fat, swoopy obvious plastic-ness detracts from the metal bicycle. A neat metal cage like amediasatex’s would look better to my eye, whether in silver or black.

Ah! but this a 'value' build and the nasty plastic bottle cage I already had is quite good at .... caging bottles .... so it stays for the moment.
The Schwalbe Ones feel faster than the old Conti Gatorskins I had before but have yet to be convinced that they are any faster than the Vittoria Hyper 35 mm I have on my touring bike. Mind you there are so many hills around here that rolling resistance is almost academic except for freewheeling down the other side. No punctures yet but it's early days since I hardly rode at all in the winter.

Did you really go from 54 to 58 cm.? That was quite a change. I decided I needed 54 or 56 cm. but eventually chose 56 to get the bars high enough. I have longish legs and shortish body and anything bigger than 56 would mean too much of a stretch. I have a 9 cm stem at the moment and anything shorter would start to be a bit daft I think.
Top

I went from 54 cm to 58 cm, yes. I wanted a decent difference as an experiment to see if it made any difference. The truth is that it has not. If I had to guess one way or the other, I’d say the bigger frame feels stiffer, but I could be imagining it. The difference is slight. The shorter stem to match the longer top tube was masked by my increasing the reach by 1 cm while changing the frame. Even that did not feel like a big change.

Over time I’ve got fitter and more flexible and have found that, to get a low-torso position, I prefer having the handlebar well out in front rather than below me in the Bradley Wiggins style. It feels more secure to me, especially on rough terrain or while braking hard into corners on descents. Consequently, I use a 110 mm stem on this 58 cm frame.
Top
Post Reply
95 posts