Samuel D wrote:no promise is made that the whole frame is Reynolds 725.

Have Spa frames always been ED coated? Are both of yours? I wonder what the weight of that is, yes I know it's going to be grams, but it's possibly enough of a difference to change the tone of flicking a tube.
I have a Thorn so treated, but have heard conflicting reports on it's effectiveness.

by 531colin
725 main tubes, far eastern plain cromo seat/chain stays and head tube....always has been, although I don't think its ever been stated as such on the website. Some things I really want to be done exactly how I want them done, and some things aren't so important to me. So for some bikes where I'm chasing the best possible tyre clearance (not Audax) I want them to bend the chainstays exactly to fit between the chainwheel and tyre with minimal flattening. In that case, I would much rather the fabricators were working with tubing they bend every day. Somewhere somebody comments on the fact that the head tube extends a long way above the top tube and below the down tube. Again, that's what these guys are used to doing, and if it means that we are not fitting headsets into a portion of tube that's been affected by the welding, I'm happy with that.
I don't know when the stuff about electrolytic painting appeared on the website.
There has fairly recently been a change in the factory building the frames. The easiest difference to see is that the "new" factory sets out the frame number differently on the bottom bracket. The guys in the shop who look at these things all day can show me other differences which are a bit more subtle. I'm not sure that "new factory" frames are selling through yet.

PH wrote:Have Spa frames always been ED coated? Are both of yours?

Both of my frames were bought before ED coating was advertised on the Spa website. Thus I didn’t go looking for differences there and didn’t notice any.

If you look at the spec. sheet that Colin linked to the only choice for top tube is probably only AG206 and the only choice of down tube is AG304.
The seat tube is either AG455 or AG457 and it's not clear to me which one you'd use for the small frames though you'd probably need AG457 for the 58 cm frame. That might weigh less than the other tube in a slightly smaller frame.

All in all surely this won't account for more than 100 gm or would they, even allowing for the stays and head tube?

Mind you, we've had puzzles like this before. A few years back we spent ages trying to understand why the Thorn Audax frame weighs. 2.3 kg and the Spa under 2 kg. when both are supposed to be made from 0.8/0.5/0.8. What's more if anything the Thorn stays should be lighter!

NetworkMan wrote:Mind you, we've had puzzles like this before. A few years back we spent ages trying to understand why the Thorn Audax frame weighs. 2.3 kg and the Spa under 2 kg. when both are supposed to be made from 0.8/0.5/0.8. What's more if anything the Thorn stays should be lighter!

True.
Perhaps both brands are now using the same manufacturer.

iow wrote:Perhaps both brands are now using the same manufacturer.

I thought Spa frames were made in China and Thorn are I know are made it Taiwan. Not that the country of origin matters, you can probably get what you want from either.

by NetworkMan
Just to underline the fact that the components contribute more to the weight than the frame. I just weighed my completed 56 cm Ti version on a digital luggage scale. Samuel's was 9.4 kg and mine was about 10.5 kg with bottle cage and pedals.
What's different?
Mudguards, square taper triple chainset, wheels and hubs, leather saddle (though it's a Ti frame),
wide ratio 9 speed cassette, STI shifters with extra cable outer and inner, mountain bike RD. double sided M520 pedals, extra chain. So if the Ti frame is about 0.3 kg less then that kit difference amounts to about 1.1+0.3 or 1.4 kg!

by Samuel D
Sounds about right. And of course you could take my frame and go the other way too, putting racing-style components on it. You could easily get to 8.5 kg that way without spending much more than we have done, just by systematically prioritising low weight over other qualities in every component (especially the wheels).

By the way, just a few hours ago I was spinning around Longchamp to make sure a new tyre was okay for a ride in the countryside tomorrow, and a guy came up and complimented my bicycle. This happens often. People really like the look of it. Of course it helps that it’s very different from the typical road bike in Paris.

by horizon
Samuel D: I've followed your bike-build with interest but the other day I suddenly thought, hang on, why did you choose a Spa frame in the first place? Did you have a short list and/or budget limit or other considerations? What swung it for you? And would you make the same choice again?

(Apologies if you've already answered all this earlier.)

Yes, you're right, although since he's had the problem with the seatpost I'm wondering if he regrets both!

horizon wrote:Samuel D: I've followed your bike-build with interest but the other day I suddenly thought, hang on, why did you choose a Spa frame in the first place?

I wanted a versatile frame for fast road rides in sunshine, slow slogs at night in the winter, and the occasional tour with light luggage. I wanted a fairly slack seat-tube angle, rim brakes, the option to use down-tube shifters, and all that at a modest price. There wasn’t a surfeit of choice.

horizon wrote:Did you have a short list and/or budget limit or other considerations? What swung it for you? And would you make the same choice again?

Budget played a role, yes. I also trusted 531colin to design a good frame, since his forum posts about fit and position had solved my comfort problems with an earlier bicycle.

I did choose the same frame again, but I admit I hoped it would solve the slipping seatpost. To get a second one with that problem was a nuisance. And now there’s the doubt about the down-tube tubing on the latest frames. So would I choose it a third time? Probably not.

That said, the slipping seatpost was definitively solved with a second clamp on the post, and I remain delighted with how the bicycle rides and its value. So no regrets. Happy.

by NetworkMan
Samuel,
You asked about the tyres. After having given them some use on decent roads I'm convinced they do roll better than the much wider Vittoria Hypers. That is comparing the Hypers at about 4 bar with the Schwalbe Ones at 6 bar. I find that they give a pretty good ride too which I like to think may be in part due to the carbon fibre fork, springy titanium saddle rails and possibly slightly springy frame. All in all on a decent road surface the bike is a joy to ride, lively and super stable going fast (for me ) downhill.
My tyres are 25 mm Schwalbe One HS462A with the V-Guard puncture protection. Are your 23 mm tyres like that or do you have the lighter sportier ones?

by Samuel D
I use several tyres on this machine, changing them back and forth until they’re done.

I like fast general-purpose tyres in the summer (e.g. Schwalbe One). For blasting around with the racing crowd, when there’s a serious risk of getting dropped, I switch to ‘open tubulars’ with cotton casings (e.g. Specialized Turbo Cotton) if I can spare the quarter-hour to do the job (I usually can). The cotton tyres in combination with latex tubes are another distinct step up in ease of rolling. At moderate speeds, it feels like the bicycle pedals itself. More people should try them!

In the winter I prefer a tougher tyre like the Michelin Pro4 Endurance, and when riding in city traffic or in the countryside on soaking wet days, I feel a lot more comfortable on something genuinely grippy (e.g. Michelin Pro4 Grip). But the Pro4 Grip is so draggy that I treat it as a specialist wet-weather tyre and only put it on when a long period of wet weather is forecast.

It’s a testament to my fussiness that I can’t settle on one tyre for all rides.

But to answer your question, my Schwalbe One tyres have all been the older HS 448 model (the entirely slick one) in 23 mm or 25 mm. I got several of them at close-out prices a few years ago. They have the V-Guard anti-puncture belt that works very well at keeping Parisian glass out of the inner tube. The tread gets cut up, of course.

by Samuel D
Proof that my Spa Audax isn’t just for pretty pictures: 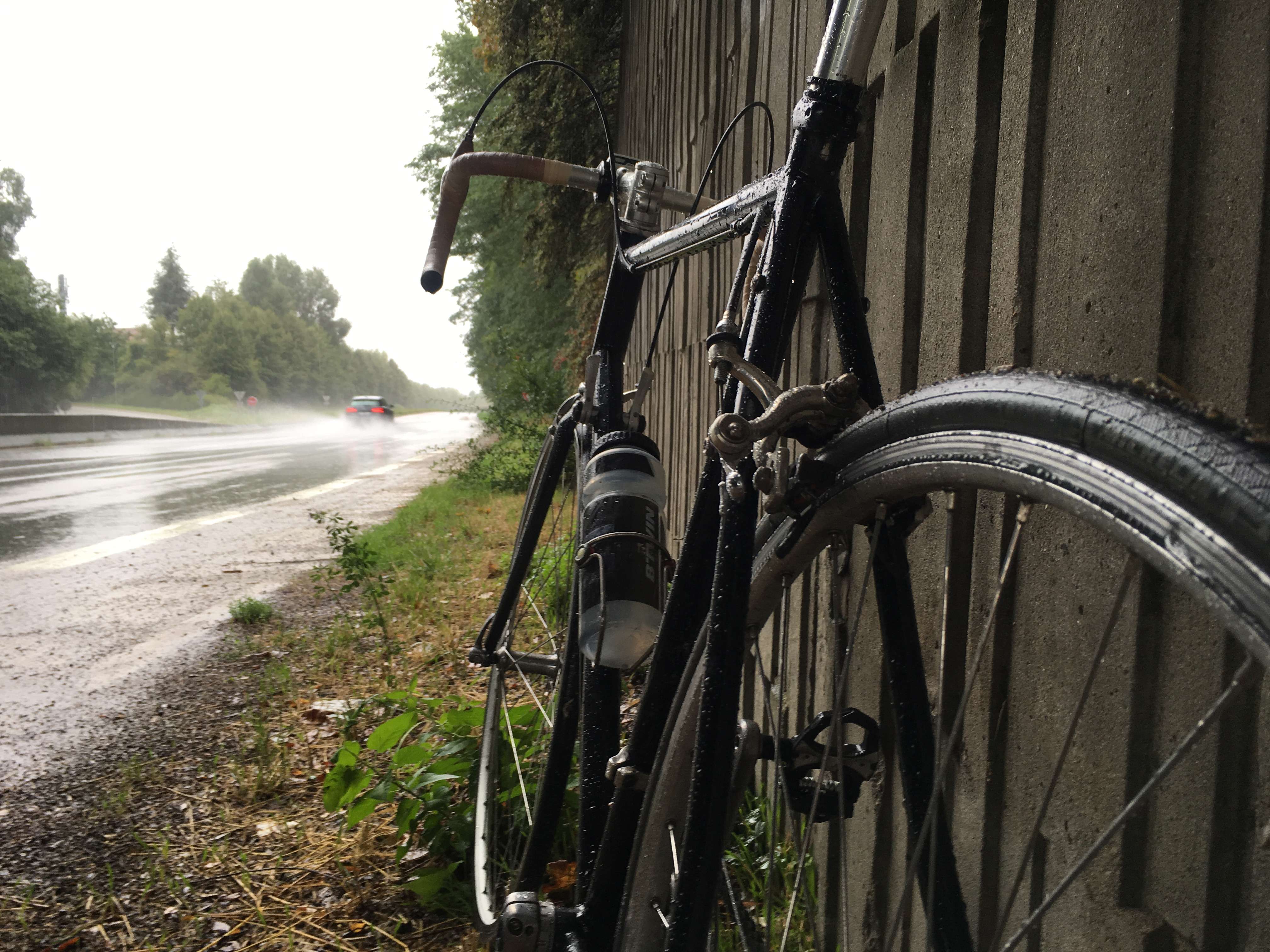 Something like 5 mm of rain fell in a couple of hours this morning. Eleven people signed up for the group ride and one rode.

I think the Paris–Brest–Paris people just missed the rain, though.
All times are UTC+01:00
Page 5 of 7
Powered by phpBB® Forum Software © phpBB Limited
https://www.phpbb.com/