Apologies if I have asked this before - have a horrible feeling I may have.

I have a garmin etrex20.

its storage for waypoints, which it insists on putting in the internal memory, not on its card, is nearly full.

A lot of them are of points abroad which I only occasionally need.

Is there a simple way of removing them to back up storage so I can free lots of memory for just my Brit stuff?

One complicating factor - I use a chromebook, though it will also run android apps.

Failing which, if needs must, I could dig out the windows laptop,
Sweep
Top

Dunno about the Etrex but as it's a Garmin, it probably works like all the Garmins I've had.

Connect to your computer.
It should come up as a volume or a hard drive or something.
Open it and navigate to the Garmin folder and open it.
There should be a folder called Waypoints.
They're all in there. Delete or transfer as you wish.

I always keep my waypoints on the SD card. The unit naturally puts them in the main unit when I say "Mark Waypoint". But after connecting to my computer I copy them onto the SD card and delete them from the main unit.

Thanks for the reply mickf - will investigate and report back.
Sweep
Top

The Garmin folder on mine has a GPX folder, and the Waypoints folder is in that.

The waypoints in the Waypoint folder aren't listed by any name you may have called them. They have a date only, not a name.
You have to identify them somehow if you want to selectively delete them.
These are mine. 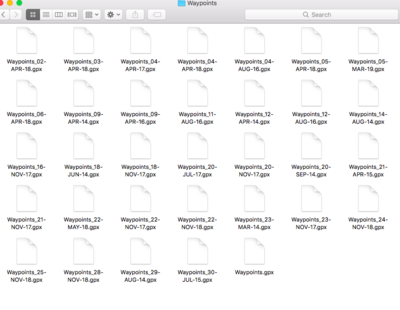 If you find your computer and it demands 21 updates and you feel like throwing it out of the window.

You can follow the manual page 9
Whatever I am, wherever I am, this is me. This is my life

The Garmin folder on mine has a GPX folder, and the Waypoints folder is in that.

The waypoints in the Waypoint folder aren't listed by any name you may have called them. They have a date only, not a name.
You have to identify them somehow if you want to selectively delete them.
These are mine.Screen Shot 2019-05-01 at 08.35.37.png

Ah yes mike, that is precisely the problem Mick.

That is as far as I have got before.

I was hoping you had a solution

I do mostly use a chromebook but that can do exactly what the PC can do in terms of looking at the garmin as a remote drive,

Then, as you say, I just see a lot of date files.

What I need to do is see the individual waypoints so that I can selectively move/store them.

I could of course copy ALL the waypoints to the chromebook's cloud drive, then delete all the foreign stuff individually from the Garmin.

But then I don't know how I could ever get them back on without screwing somnething up, imposing mutiple duplicates on the Garmin and then maybe overloading/crashing it.

I thought I had tried moving waypoints to the card (where the maps are) in the past but had a memory that it didn't work.

Can your Garmin (can I ask what it is) work with waypoints on the card while also putting new Garmin entered ones on the internal memory?

Any signs at all of it going screwy/getting confused by having two waypoint storage locations?

Other Garmin users must surely have the same issue?
Sweep
Top

Paulatic wrote:If you find your computer and it demands 21 updates and you feel like throwing it out of the window.

Thanks paulatic but don't think the issue is covered there.
Sweep
Top

Hi again Sweep.
My present Garmin is a Montana.

What I can do with my Montana, is look at the list of waypoints on the Montana screen. I always give my waypoints a name, so I know what/where they are. There may be a few that I can't remember where they are, but I can click on "Show on Map" and it will show me where they are. I can delete or keep as required.

This is a screenshot off my Montana listing some of the waypoints.
Clicking on one will give a menu item - Show on Map - so I can see what and where they are. 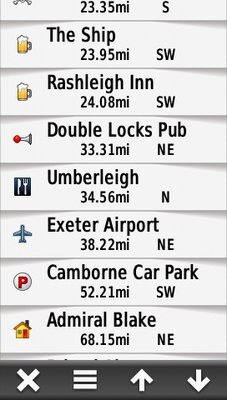 As I said, I don't know the Etrex. Maybe you can show your waypoints in the way my Montana can.

Once you've rationalised the waypoints you want, copy them onto your computer, then delete them off your Etrex.
Once done, you can copy them onto your SD card. Mine are all on the SD card and will show on any of the maps I have on the device.
Mick F. Cornwall
Top

Hi Mick
Yes I can display them like that on the garmin itself but that display is of no use when I connect the chromebook to the garmin and want to move stuff off selectively, for as you say upthread the file system gives no info on individual waypoints.

I suppose I could set a text editor to work on those individual files looking for names I have given the waypoints but I would be afraid of screwing something up.

Garmin is at least aware of the need to do what I need to do:

as I found this:

I may have to boot up the old windows laptop and see what I can do with Basecamp on that - though I hate getting the clunky thing out after being converted to the chromebook by alrypal from here.#

It also occured to me the other day that I may be able to do something using OSMandplus which I run on an android tab (and can in theory run on one of my chromebooks) as that allows you to organise waypoints into lists.
Sweep
Top

Sweep wrote:PS - I couldn't help but note that your list of displayed waypoints appears to include rather a lot of what appear to be pubs

Of which the Rashleigh Inn, if it's the one near Fowey, is a cracking good example.
Top

Yes, the Rashleigh Inn at Polkerris is a wonderful pub, almost on the beach and at the bottom of the wonderful SW Coast footpath that zig-zags to the east, and climbs steeply to the west. We've done a few walks in that area over the years.
http://www.therashleighinnpolkerris.co.uk
Look at the photos!

I set that waypoint as friends of ours and us were going to stay at the Royal Inn just across the road from Tywardreath station. Get the train there and back. We could stay overnight after a a good walk including the Rashleigh. The trip is still on the cards for us, but not happened as yet.
Mick F. Cornwall
Top

I used to have this same problem on my eTrex Vista whenever I went on holiday! There's a 1000 limit on waypoints and I ended up deleting far-flung waypoints to make space, using either Garmin MapSource or Trip and Waypoint Manager. This took ages, deleting individual waypoints on a map. You can do the same in BaseCamp.

Looking online, this http://www.gpsvisualizer.com/convert_input web-based tool may be helpful if you are Chromebook / web-based rather than Windows. It lets you define a reference point by Lat/Long and then convert a .GPX file of randomly ordered waypoints into one that is ordered by distance from the reference point you define. You can then use a text editor to lop off the more distant waypoints and save a new file with just the nearby ones.

I don't have an eTrex20, but just tried it on my venerable eTrex Vista HCx. I was able to get the waypoints off the device with Garmin MapSource and save them as a GPX file. I then produced a new file sorted by distance from home using GPSvisualiser and saved the closer ones as a new GPX file and replaced the waypoints on the eTrex with just the closer to home subset. I was also able to drop this cut down .GPX file into "New Files" on a Garmin Edge 1000 and they now show up as "Locations" saved in a .FIT file.

It's a bit clunky, and obviously be sure to save the original waypoints as a backup just in case, but on a first look it seems to work. I don't know how waypoints are stored on an eTrex20 so there may be some .FIT to .GPX conversion needed somewhere along the way.

As always, I'm sure there will be other better tools to do this far more elegantly out there!
Top

Thanks for that backnotes - I have used that prog in the past but wasn't aware of that functionality - it sounds like just the thing.

Yes I will make backups (easy enough to do on a chromebook since it disciplines you into putting stuff on the google drive anyway).

I have been meaning to report back for the last couple of days.

I did manage to get the waypoint capacity count down from something seriously north of 90 per cent to 74 per cent by using a text editor (caret for the chromebook which actually works offline) and looking in all of the datestamp waypoint files. Still no idea why the garmin has all those separate dated waypoint files when it also has a big waypoint.gpx file but it does have a certain advantage - the dating meant that some of those dated files were all foreign stuff. So I just took them off and stored them on the google drive,

In addition to the big waypoints.gpx file there were also a few with a number afterwards which appeared to be essentially empty but just full of header and topper coding - something to do with when the unit had been connected to basecamp in the past. These I just deleted.

The big waypoints.gpx file (very big for some reason) is a mostly UK but does have some foreign points in - I did import this into the OSMandplus android app running on my chromebook, looked at the points on a map and then put the foreign ones in a separate file. The remainder, just UK, I created a second GPX file out of using OSMandplus but rather lost my nerve as the resultant file did seem to be very small compared to the original one on the Garmin. This may have been because the original file had lots of superfluous coding in it - again possibly becase of it having gone through the basecamp mill in the past.

I am no techie but have found that gpx point to point route files and gpx waypoint files are often very simple with lots of extraneous matter which (with backups made for safety) can be substantially trimmed without losing any functionality.

When I have a mo I will experiment with your suggestion on that big waypoint file.

The functionality is hidden under advanced options / waypoint options. There's a box to enter the reference lat/lon and then a tick box for "sort output by distance from reference point".

My waypoint file had all kinds of rubbish at the end of the file, but the good stuff close to home was at the start.

Hope it works for you / helps. I am happy because I was meaning to import some but not all waypoints from my eTrex into Garmin 1000 but never got round to it.
Top
Post Reply
15 posts • Page 1 of 1