by 531colin
As Brucey says, 725 seat tubes (AG 455, AG457) are externally butted at the top. If you run your fingers down the top bit of the seat tube you will feel where the outside diameter steps up …..according to the Reynolds Tubing list here.. http://www.torchandfile.com/assets/images/Reynolds/Reynolds%20Tubing%20Parts%20List%202014.pdf
...the external butt is 100mm long, with a wall thickness of 1.2mm
The outside diameter of the main part of the tube is 28.6, which should give an internal diameter of 27.4 (with wall thickness 0.6mm)
We are not told the outside diameter of the externally-butted bit, only the wall thickness. (EDIT....we are not told either inside or outside diameter.)
I'm just guessing, but my guess is the internal diameter of the tube before welding into a frame is constant all the way down, ie 27.4 throughout.
Welding up a frame gets the tubes hot enough to cause a bit of distortion, which is why the 725 seat tube which starts out as 27.4mm internal is usually reamed to take a 27.2mm seatpost after the frame is welded up.
Seatposts vary in size; I have 4 bikes on the go at the moment, all of them take 27.2 seatposts, as did 2 previous bikes which I no longer have.
I have a lot of 27.2 seatposts, but all the posts don't fit all the bikes. Some posts wobble in some bikes, and one post needs a lot of pushing and shoving to get it to go into one or two bikes.
I can't forsee the day when there is an agreement between frame builders and seatpost manufacturers as to what the actual real sizes of the seatpost and the hole it goes into should be, but until there is some agreement we are left blundering around trying different posts in different frames to find something which actually works.
There seems to be a temptation to "make sure the post will go in without scratching it"....so the post is undersized and the hole is oversized, Just to be sure, to be sure. ....then the damned thing wobbles.

I've tried two different 27.2 'posts in the frame but both are loose, one (the new 'Pro' 'post) is looser than the other (a used cheaper 'post from my commuting bike, which is a close fit in that frame (631 Reynolds)).

I bought a cheapish 27.4 'post but that also does not fit in the Aubisque. Have tried abrading it down to size but it's a slow process and doesn't fit yet, also doesn't remove material uniformly. I'll bring the frameset back to the shop when I'm in York in 2 week's time to see what they can do, but this is the first steel frame I've had (out of 8 or so road frames, including custom frames from Mercian, Vernon Barker and Caygills) where the rated 'post size does not fit.

It's a shame as I like the look of the frame and the design and was looking forward to riding it this Summer!

by bgnukem
Based on Colin's and Brucey's replies and the fact that the nominal seat tube ID of Reynolds 725 is 27.4mm perhaps the solution is to get the seat tube reamed to ensure the externally butted portion of the seat tube is actually 27.4mm and use a larger seatpost. Perhaps Spa could do this in-shop?

The minor thinning of the tube would presumably occur within the thicker-walled butted portion and therefore not weaken the tube significantly.

The only downside is less choice of seatposts in 27.4 vs. 27.2, and I would be unable to get a Cane Creek Thudbuster ST seatpost in that diameter if I decided to fit one (recommended by the way!)......

by 531colin
As you say, take the frame back to the shop when you are in the area.
If Spa's usual seatpost fits, then that's the answer....don't use a post that's undersized.
If Spa's usual post is too slack, it seems to me theres something wrong with this particular frame.
Its a new frame, it wants to be right. You don't want to be messing about trying to grind down a 27.4 post. I wouldn't want to ream out the frame to 27.4.... you only have 100mm length of seat tube at the top that's 1.2mm wall thickness, then the middle section is only 0.6mm....and its a new frame, it wants to be right!

by bgnukem
To complete this thread, took the frameset back to the Spa shop on June 15th.

After showing them my seat post they got out the seat post (Kallloy Uno) they usually sell with the complete bikes and I tried both in my frame, both were loose and could be 'rocked' inside the seat tube, though the 'post I'd bought was slightly looser and measured ~0.1mm smaller in diameter. Also tried both 'posts in a stock frame they had and in an Aubisque bike waiting sale on the shop floor with the same results.

Having already tried a 27.4 'post in my own frame, which didn't fit, and measuring the seat tube ID at 27.3mm it seems Spa have manufactured a frame which requires an (unobtainable) 27.3mm diameter seat post!

I agreed to buy one of the seat posts they usually sell with the frame but am not particularly confident it won't drop so have bought a couple of 27.4mm diameter 'posts which I will have machined to fit the frame.

I've had a lot of different bikes over the years but have never experienced such a loose seat post before. Since Spa make other models (Audax, touring bikes) out of Reynolds 725 tubing I would suggest being very careful if considering buying one and make sure you check the seat post fits!!

by horizon
I've got a Spa Tourer frame waiting to be built up. I've just inserted a (separately bought) 27.2 seatpost for the first time. Going in dry (there may have been some residual grease in the frame), it's a perfect fit with no movement whatsoever. A little gentle tightening of the clamp was all it required to make it fast.

By comparison, I then untightened the seatpost on my Thorn Club Tour and I can get a smidgeon of sideways movement. I haven't tried the Spa with a saddle on and obviously not yet on the road. Also my measuring skills aren't good enough to check the actual diameters.

Obviously this isn't a conclusive test but at first sight it is 100% OK so it might be a batch problem. Naturally I'd be happy to report further once it's road tested. If other Spa owners come forward that would be great (I think one member, Samuel D, has the same problem with his Spa Audax).

horizon wrote:If other Spa owners come forward that would be great (I think one member, Samuel D, has the same problem with his Spa Audax).

Yes, I had the problem on both my Audax frames bought years apart. In the first case I cannot rule out causing it myself (corrosion), but in the second case there’s no doubt it arrived like that. Numbers are about 27.3 mm in my case too.

It’s a nuisance, but a second clamp on the seatpost itself solves the slipping problem definitively. This clamp is one half of a seatpost bottle cage mount aimed at triathletes, donated to me by a kind member of this forum. Very light and pretty discreet, though not invisible because I do get questions about it occasionally.

If anyone knows a source for lipless 27.2 mm clamps that lack a bottle cage mount (hole tapped for M5 screw), even better.

by kylecycler
Would this be the solution, Samuel? 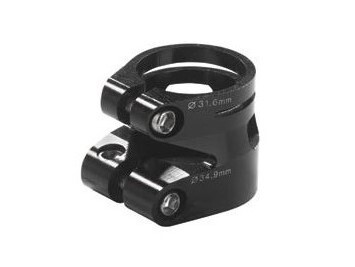 It's pricey but I think it's clever and quite elegant (not just for carbon posts - also aluminium - and there are two different sizes).

by Samuel D
Something like that would be a little neater than my current arrangement. However, the model that fits a 27.2 mm seatpost is for a 31.8 mm seat tube – no good for a steel frame like my Audax.

by kylecycler
Ah, right, I didn't look at the specs closely enough. I bookmarked the clamp a while ago when I was looking at carbon seatposts slipping in carbon frames. I was 'thinking' (still am, probably always will be!) of going for a Chinese open mold carbon frameset and that was an issue which occasionally cropped up, though more often with an 'aero' shaped seatpost, for which that clamp wouldn't even be the solution.

Probably says something about my mindset that I was worrying about something that wasn't likely to happen even if it never did.

Samuel D wrote:Something like that would be a little neater than my current arrangement. However, the model that fits a 27.2 mm seatpost is for a 31.8 mm seat tube – no good for a steel frame like my Audax.

I used one of these on my mountain bike. It has a Reverb dropper post and with the clamp tight enough to stop the post slipping in the frame the internals of the post bind slightly. This double clamp worked very well to reduce the clamping force - no binding and the post stays where it should be. It's a steel frame and the lower diameter was off by 1mm so I packed it out with some shim stock

by bgnukem
While I was at the shop I tried my seatpost and the ones Spa fit into several Aubisque frames and also into a 725 audax frame and all were loose and could be rocked in the seat tube.

I would suggest Spa clearly have a tolerancing issue as I've not experienced this problem in any other frame I've owned before. In this case neither a 27.2mm seatpost (I've now tried three of them) or a 27.4mm will fit!

Hopefully the seat posts I'm having machined to fit the frame will mean I can finally ride the bike, but it's hardly an ideal solution. Obviously I'd be keen to hear from any other owners who've had this problem....

by iandriver
I've got a small additional collar that came with a carbon post that clamps onto the post itself, not over the frame, like the one that came on the end of the one in this picture: https://road.cc/content/review/6502-tif ... -seat-post

Something like that would be ideal, but I can't seem to see one as a spare. A google for lightweight seatpost collar seems to bring up spurious results.

by PH
I've had a couple of frames that have required a shim, one considerably slacker than the other, once fitted neither slipped or gave any other sign of a problem. I've also had a couple of frames that are designed to be used with a shim and came with it, again no issues.
The bike built up at the shop was obviously going out like that and they were not envisioning an issue. If it were mine, I'd fit the new post, ride it and if it slipped make a shim and forget about it.

PH wrote: I've also had a couple of frames that are designed to be used with a shim and came with it, again no issues.


Me too. Both my folders come wih shims in what are obviously wide seat tubes. AFAIR, Tern even sell it as a spare.

If it were mine, I'd fit the new post, ride it and if it slipped make a shim and forget about it.

I personally also feel that shimming is acceptable. But how would you do it? The shim required is only .1 mm thick (AIUI). What did you have in mind?
All times are UTC+01:00
Page 2 of 5
Powered by phpBB® Forum Software © phpBB Limited
https://www.phpbb.com/