Last week a friend of mine moved my (most-used) bike a few yards because it was in his way. "That bike needs a lot of love" he said. He's not wrong; it is both long overdue a fairly intensive bout of maintenance, as well as being an integral part of some ongoing 'how close to destruction?" experiments.

The experiments are to see just how bad things like bearings need to be before they are actually going to fail in short order, so for example the pedals on it are basically knackered, at least one bearing from four is. Since knowing whether something is going to hang together for another five minutes or another five thousands miles is a useful piece of information, I'm finding this out. If the experiment pedals get too bad, I can fit perfect pedals of the same type in just a few minutes.

The bike is mainly used for short journeys (locked up with a lock of indifferent quality) and occasional longer rides, but stacks up several thousand miles most years. Other than the ongoing experiments I would normally keep it in a condition where I would happily ride it a hundred miles or so without too much worry (and I usually do this, at least once a year, on this bike). However it has kind of gone past that point now; some of the parts have gone from 'OK' to 'needs maintenance' to 'another experiment is underway'.

So there are some yardsticks to gauge the condition of the parts; "would you recommend their replacement (sooner rather than later) if they were fitted on someone else's bike?" is one, and another is "if those parts were in your bits box (rather than already attached to your bike) would you bother fitting them, bearing in mind their likely remaining service life?".

A sober judgement of the whole bike reveals that there are very few parts which pass muster either way. So I'm playing 'bicycle brinkmanship' then. Ho hum.

One of my chums had a (once touring and then in latter years commuting) bike in a similar state a few years ago and after sober appraisal we both agreed it would be flogging a dead horse to carry on with it. Since he was time-poor, I built him the 'supercommuter' bike instead. I think we re-used the mudguards and the rack from the old bike. Nothing much else passed muster; I carefully took the old bike apart and everything was knackered; nearly all of it went for scrap; [I eventually relented and repaired the frame but several square inches of corroded chainstay had to be cut out and replaced, amongst other things; it'll do for a beater but its never going to be a first-class frameset ever again]. The interesting thing was that whilst there is no way you would have built a working bike using those parts, he'd been riding it like that. Unfortunately my most used bike is in some danger of being in the same category now.

So one question is... what do I do now? I could very easily build myself a much better (potentially more reliable) machine (e.g. a la supercommuter, maybe with an IGH instead) for this role, and I have enough parts squirreled away to do that too, but most of my 'experiments' would have to stop. It'd also be a better target for thieves (the current machine doesn't look worth stealing...). Or do I try and carry on with it? If I do the latter what yardstick should I use? Some thinking to do there. One thing I don't want to do is to press-gang one of my other bikes into this role; I am pretty sure most of them wouldn't last five minutes (for various reasons).

However this also raises the question of what yardstick do other folk use on their bikes? I've seen folk riding round on worse bikes than this one for sure, but this has usually been as a result of unwitting neglect rather than carefully applied sober judgement; 'unintentional brinkmanship' if you like. For example I positively don't want the bike to look smart (I think someone will nick it, given its present use) whereas for other folk that is a primary motivation.

All comments and suggestions welcome.

I'm a fan of experiments.

Also, I don't pay too much attention to what other folks say about my bikes, unless it's nice. Or it's my mechanic.
“In some ways, it is easier to be a dissident, for then one is without responsibility.”
― Nelson Mandela, Long Walk to Freedom
Top

the thing is, the friend who said "..that bike needs a lot of love" -which he prefaced with an expletive or two which I cannot repeat- is a professional bike mechanic. I strongly suspect that if someone were to bring that bike into their workshop, their recommendation would be 'scrap it'.

There is doing things as they should be done (hence the mechanics unrepeatable language), and there are doing things that while unconventional/not "proper", do work (after a fashion). Your bike falls into the latter - and better to do such things only on your own bike.....

As for criteria, I would say
1. Make sure nothing vital is likely to break which might cause you serious damage (cranks, handle bars, chain, any brake component, wheel collapse).
2. That the brakes work reasonably well/reliably.
3. If you can't manage the above 2, fix it or scrap it.
Most other things are annoying/inconvenient if they fail. Worn/slipping transmission isn't so bad, as from talking to customers, they always find a way round it, use a different gear or what ever (customers can be alarmingly creative in this regard!)

I would say the above is as low as you should go. I use a considerably higher standard than that on my bikes!

An old boss of mine had a 1970's(?) racer, screw on freewheel/Mavic 144 cranks vintage.
He wore out the chain, I said it (the chain) was pretty bad (the boss ran a bike shop). He said he was seeing how long it would last. It was hanging off the bottom of the chain wheels when you looked at it. It sill worked with out slipping (think pre hyperglide so chunky teeth) . Then over a period of 3 - 4 days it slipped to the point of being unridable. So experiments can be interesting.
Top

A big factor is where you ride the thing to. (how far, and how far from usable trains etc)

i.e. just how inconvenient/expensive would it be if the bike became unrideable.

(apologies if this is mentioned in your rather long post!

When I used to live on a boat, I knew someone who instead of locking his bike, used to chuck it in the canal when he wasn't using it. When it was time to go somewhere, he'd pull it out and ride into town.
If the bike lasted two months, he was still up on a couple of bus fares. And to be fair, no-one ever stole his bike.
Top

Did you actually see him do it? It's a good story, anyway.

Yes. He was quite well known for it. Was mostly around Oxford way.
Top

if the Di2 goes out of flunter then it's skip time.
Top

I was impecunious and ignorant of bikes when I set off for the Alps. My pedals, Lyotard rat traps, were beginning to return to their separate original parts, and the bearings were loose and dry. I hoped that they would last, they did. The leather saddle was near death too, but my buttocks must have been tougher in those days.
I am much more of a perfectionist these days, but I can afford to be.

The cybercensor gave me only one cheek, so I have corrected it.
Top

I don't see the point of running knackered equipment. It makes the bike less pleasant to ride, there's the stress of not knowing if something's going to break, potentially at a dangerous moment in traffic. Bikes are so cheap to run compared with cars anyway.

Given the prevalence of dangerous driving around cyclists in the UK and the heavy traffic I want the best brakes, tyres and drivetrain I can get as my life could depend on the bike working properly.

I think many people don't know how to maintain their bikes adequately, or appreciate the effort required, and so inadvertently run badly maintained and potentially unsafe bikes. In the event of an accident and determining liability etc. this could backfire on them.

My bikes are relatively old (25, 20, 12 and 7 years) but everything works perfectly and gets replaced if it doesn't. Part of the pleasure of cycling to me is the feeling of riding a bike that runs efficiently and quickly, even if it is only a commuter or runabout.
Top

Bikes can very much run for ever.
Things that might destroy a bike would be

There maybe others that I have forgotten....

Most other things can be repaired.

My old student bike s/h to me 20 years ago recently had a new lease of life ..

When I worked in India for a short time, I saw bicycles in some very interesting stages of - err- 'experiments' Having all the ball bearings on display so you could see if they were all there was a must. As was load testing with three people and most of the spokes, Optional extras like brakes were for the better off.


Of course joking aside these bikes were of a very different sort of ruggedness than normally seen here and some of them looked very old indeed.
Cheers
J Bro
Top

If you want to see bicycles tested to destruction, try going to Africa. This Tanzanian bike is in comparatively good nick compared to many. Note however the lack of brakes and the downtube weld behind the headset. The rebar rack is a bonus. 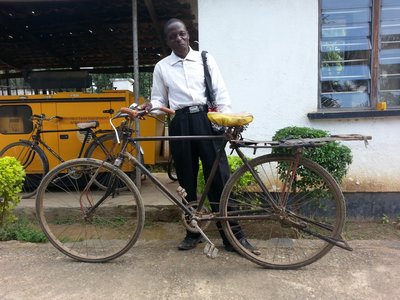 Brucey, you don't think regular pressure washing may be a cause of bearing failure?

Well lubricated and kept dry bearings last a very long time for me.
It's many many years since I replaced any pedal. I have two sets of Shimano SPDs and a set of one sided SPD VP brand.
That's many thousands of miles on three bikes. All are sweet and smooth with a regular spot of oil.
Indeed the only bearings I have replaced in 20 years were some Sram front wheel all in one type races that were rumbly when I bought the (secondhand) bike and lasted for another 5 or 6 thousand.

I do confess to not riding regularly in heavy rain but I do ride a deal in wet and salty road conditions.
Storing a bike inside or under cover is a big help too, IMHO.
Top
Post Reply
28 posts