Does anyone know a good resource for stripping and refurbishing 10 speed Veloce shifters? There is plenty on YouTube but these tend to show Record level which have different components inside.

An exploded diagram would be great too. Also where can I purchase any spare parts once I have identified the slippy issue?

Are the Veloces similar to the "Escape" versions ?
https://www.youtube.com/watch?v=K_2G5NgluQM

and Campag' spares are becoming hard to source these days but Velotech may be able to help. ?
http://www.velotech-cycling.ltd.uk/campagnolo.shtml
There's no such thing as a tailwind.
It's either a headwind, or you're going well.
Top

Campag 10s veloce ergos have been made since 2004 and there are at least three different versions; Ultra-shift (US), Quick-Shift (QS), another US version, then (since 2011) Power Shift (PS). The parts inside each shifter type are quite different from one another. There are exploded diagrams on the campag website, in the spare parts pdf for the year of production. There are various online show and tells which will guide you through disassembly.

So ideally you need to know the year of production before you can see what parts are inside your shifters. It is not marked on the shifters (just to make things easy....

) and it isn't always obvious which exact model you are dealing with. However you can get a fairly conclusive idea if you are on the right track or not by simply typing 'campagnolo veloce ergo 2013' into an image search engine (if you think they are 2013 model ergos) and comparing.

Anyway the US versions are (were) the most repairable; these (originally) shared internal parts with 'Record' ergos. Common wear parts are

These shifters wear so that every 20000 miles or so you will definitely need new G springs if not the other parts as well.

You can still buy the G springs and the G spring carrier (I think) but campagnolo have helpfully stopped supplying the index wheel as a separate part. So if the index wheel is shot you might be lucky and find a NOS one on ebay. The other thing you can do is send the shifter for repair to velotech cycling ltd who are campags approved repair agents in the UK; they often have spare parts which are not more widely available.

I don't know much about QS shifters except to know that they are best avoided.

If you have PS shifters then trying to repair them is pointless (*); they nearly always wear out in the same way and they don't sell separate spare parts. The approved 'repair' is to replace the shifter body and internals, i.e. the whole shifter bar the brake lever itself and the rubber hood, more or less. The spare part often costs about the same as buying a (single) new shifter. There are some US shifter bodies which accept the PS hood and lever; some folk upgrade to the US shifter internals this way.

(*) they are not a durable shifter design; the chances are excellent that they will wear out/break repeatedly if you ride you bike much. Annoyingly the internal parts that usually fail (and give the 'lots of upshifts when you only wanted one' syndrome) would cost mere pennies if only the shifter was designed to be repaired.

Thanks for the link, the veloce look to have the same mechanisms so hopefully after a clean all will work

mellon farmer wrote:Thanks for the link, the veloce look to have the same mechanisms so hopefully after a clean all will work

worth a go I suppose

there's a first time for everything...

OK another question, how do you know which exit for the gear cable? 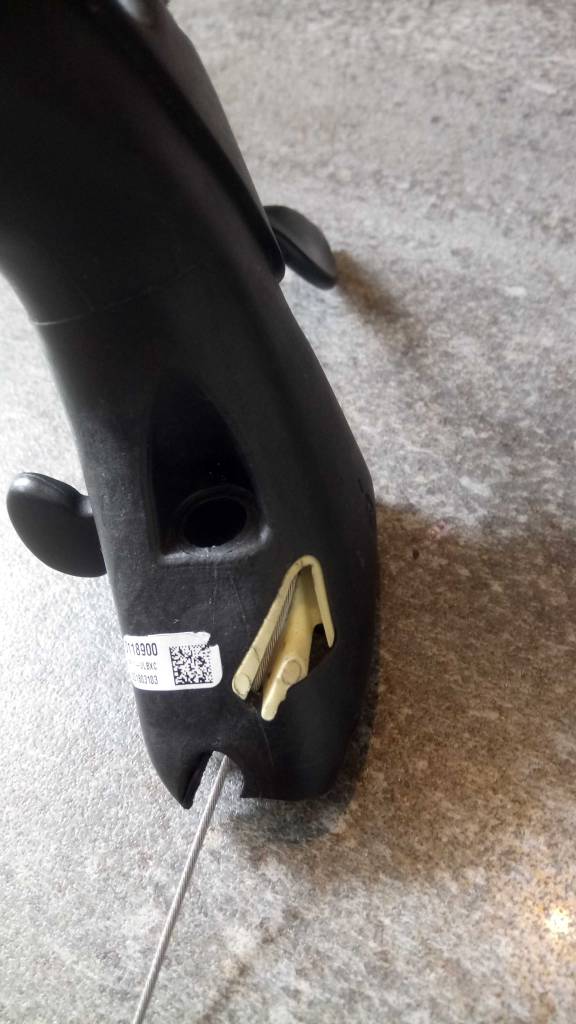 mellon farmer wrote:OK another question, how do you know which exit for the gear cable?

Depends on whether you want the cable to go behind or in front of the bars.
The slot shown guides the wire over to the front whereas the other slot guides the wire around the back and under .
I have mine as shown above and the outer is hidden under the hoods.
I try and get the cable runs with the least bend possible. Even more difficult nowadays with the tight bend of "compact" bars.
There's no such thing as a tailwind.
It's either a headwind, or you're going well.
Top

Makes sense, many thanks