For discussions about bikes and equipment.
Post Reply
4 posts • Page 1 of 1

I am on the lookout for suitable replacement forks for a tandem, 700C with rim brakes and front hub motor. Max all up weight around 180kgs (includes 20kg luggage over rear wheel, nothing up front).

Any views on whether a Kona P2 fork (as fitted to Kona Dew) would be suitable, like this for example: 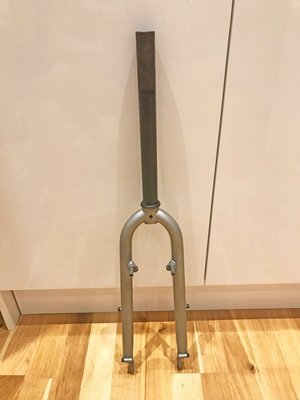 The tandem is a 2009 basic alloy Viking Tarantino with stock cromo forks. The current forks are OK but the clearances are very tight: 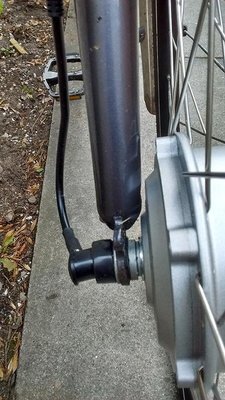 P2 forks are strong for a solo fork but they are still a solo fork, not a tandem fork.

What is the problem with the extant forks exactly?

The extant forks are basically OK, although their tubular structure with the dropouts emerging from the middle of the tube impinges on the 100mm OLN clearance. The Kona forks are 'flatter' on the inside blades and maintain a full 100mm OLN over a longer length.

To obtain clearance for the hub motor currently requires use of shim washers, or I could manipulate the spokes slightly to get the rim central between fork blades. It is at present a little offset.

Thinking about it realistically, I probably do not require to change anything really, it is working with a couple of mm clearance so why worry!! It's just that I saw the Kona forks on eBay at a reasonable price with all the correct dimensions and thought maybe they were worth a punt. As you say, they are for solo bikes really so that answers the question in a nutshell,

In Tony Oliver's classic book "Touring Bikes, A Practical Guide" (Crowood Press 1990) he recommends tandem forks are built with a longer offset "..typically between 2 1/4 inch and 2 3/4 inch. On a solo combination this could be dangerous, leading to ferocious handlebar oscillations .. "

Conversely he says "...The first racing tandem I built for myself had 73 degree head angle and, mistakenly, only a 1 3/4 inch fork offset, a classic solo set up. I as an experienced tandem pilot, had to battle to stay in a straight line..."

Tony O puts this difference down to self-steer ability (by leaning) .. desirable on a solo but a nightmare on a tandem where the stoker's movements are out of control of the pilot.

I have a similar Viking tandem - the forks are fairly cheaply made, with stamped dropouts, but are strong enough and the handling on mine is rock solid .. super stable on fast downhills - I wouldn't want to put the handling at risk by putting random solo forks on mine. (It looks like you have come to the same conclusion anyway Simon