Fixie: Why? Why not?

For discussions about bikes and equipment.
Post Reply
148 posts

When I started cycling some clubpersons used fixed only, for touring, racing, training
Others rode fixed all winter, to get the rough off

My plan now is to have two everyday bikes, one with Sachs 7 gears, one with fixed (much much lighter)
I wonder which I shall use more
Entertainer, kidult, curmudgeon
Cycling-of course, but it is far better on a Gillott
We love safety cameras, we love life "1330"
Top

SimonCelsa wrote:I have never quite seen the point; cycling slowly in congested areas, getting the pedals back in position when stopped at the lights, hopping up kerbs, tight cornering at speed.....just a few of the things made difficult without a freewheel. My overriding impression was that it all seemed a little overwrought for no real benefit. Must try harder, I know.

Those all seem like cons against riding in busy urban areas rather than against fixed per-se.

I love riding fixed in the sticks, but not such a fan when it’s busy, now if someone could do a hub that could shift between fixed and free with a flick of a lever I’d be all over it, I think I read that such a bodge is possible on a sturmey if you’re prepared to weld some bits together...

I ordered the new wheel with a flip-flop hub, double fixed was not available
If riding a single free I should always want a back-pedal brake
Entertainer, kidult, curmudgeon
Cycling-of course, but it is far better on a Gillott
We love safety cameras, we love life "1330"
Top

Human beings are strange things. Sufficiently large brains to invent gears but not large enough to use them.....
Top

I have ridden fixed in winter for the past 12-years. Its just a different cycling experience, the rear wheel has a flywheel effect which makes the rider feel like they are being <pushed> along and that is a great feeling. There is also less friction in the transmission without the derailleurs. When you first try riding one it seems a hopeless task and you have to lose the urge to freewheel or the bike will remind you by trying to buckaroo, what may seem like a big gear on a fixed will get you up hills (and often past slower twiddling geared riders) which you definitely would not attempt on a geared bike. My bike is a 531 road bike conversion (66" gear) with mudguards and really is quite light without all the gear levers , derailleurs , cables fitted. As these are not in the mix they don't need cleaning either so maintenance is much easier. Chains can wear quickly (I use 1/8 pitch) but decent rear sprockets last for ages .You need to keep an eye on the chain tension at all times as too loose a chain can fly off with the possibilty of locking the wheel /trashing the back end of the bike/throwing the rider down the road. Too tight will kill your transmission / bearings. As I said fixed is a different cycling experience...and I adore it!
Top

Pneumant wrote:
You need to keep an eye on the chain tension at all times as too loose a chain can fly off with the possibilty of locking the wheel /trashing the back end of the bike/throwing the rider down the road.

That brings back memories! When my chain hopped off on a long steep descent my rear tyre scrubbed through in about 1.2 seconds and my inner tube in 0.05 seconds. I did avoid hitting the deck though, managing a controlled hop-off onto the grass verge.

Fixie is normal for learning to cycle, I remember a trike with pedals fixed to the front wheel for a three year old, later one progresses (?!) to freewheel
I have often been surprised how much a freewheel or a wheel with hub gear weighs

FFF, Fixies For Future!
Entertainer, kidult, curmudgeon
Cycling-of course, but it is far better on a Gillott
We love safety cameras, we love life "1330"
Top

Cyril Haearn wrote:..
I understand fixed hub gears with two or more ratios are available, anybody used one?

Not used one myself, but my father used to talk with awe about a 4(?)sp Sturmey Archer fixed which one of his CTC clubmates had in the 1930s. Apparently they were temperamental, and Jack Lauterwasser was said to be the only man in the country who could service them.
Top

The SA S3X is a 3 speed fixed. Doesn't seem widely available right now, I wonder if it has been discontinued?
Top

slowster wrote:No unnecessary gear changes in search of that slightly better gear. On a fixed gear bike you are always in the right gear.

I've used a Sturmey S3X three speed fixed and didn't like it all. Loads of lash and heavy, it was neither fish nor fowl IMO. I took it off the bike after one ride.
Top

freeflow wrote:Human beings are strange things. Sufficiently large brains to invent gears but not large enough to use them.....

I've never ridden fixed since my teens and would never go back to it.
Reason?
Hills.
It's better to freewheel down 'em and,with enough gear range,easier to ride up 'em

The SA S3X is a 3 speed fixed. Doesn't seem widely available right now, I wonder if it has been discontinued?

Internally it was a kind of hobbled five speed hub, i.e. it had third gear as direct drive. IMHO it is highly unlikely that anyone will ever produce a variable fixed gear hub that will satisfy every fixed gear user.

The reason is that they might be super-sensitive to any backlash in the drive; many such riders don't even tolerate small amounts of chain slack, or sprockets in which the chain rollers are a slightly slack fit. Any sliding clutch in a hub is liable to have some backlash rather than none.... so will be rejected likewise.

FWIW if you are not too fussy about such things you can make a 2s fixed gear hub from an old SA three speed, with gear 2 direct drive. In essence the high gear drive pawls are removed, and the planet cage is fixed to the hubshell at the left end. WIth the sliding clutch in the 'gear 3' position there is direct drive. With the sliding clutch in 'gear 2' (or gear 1) position you drive the ring gear and this gives you a low gear. Ratios are 1.00 and 0.75.

I used to use a fixed wheel on my bike each and every winter to save the expensive geared transmission from the corrosive grime of winter roads. I used a 54” gear because of a desire to get up some pretty steep hills without falling off; it taught me how to spin which is probably how I can still keep up 130-140 rpm! Then the bike collection grew and I moved to somewhere even hillier and it made more sense to have a winter/grotty weather bike... Now neck issues make riding “normal” bikes a challenge and so I’m mostly on a recumbent; a fixed recumbent is possible but in general a Bad Idea (if you value your knees).

FWIW the White Industries hubs are a lovely piece of kit. The splined sprockets are not repurposed Shimano the ones but very beefy models with a propriety sine wave like spline (you can see it in the photo above).

FWIW (2) back in the 80s a British inventor brought out the “Fixed-Free Drive” which I think screwed onto a fixed hub (I assume it needed a lock ring) and could be toggled between freewheel and fixed with a repurposed SA lever.
Top 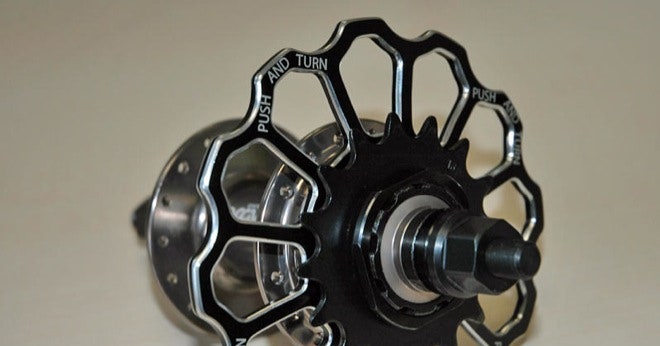