For discussions about bikes and equipment.
Post Reply
11 posts • Page 1 of 1

Hi, Can anyone help me with 2 frames I have acquired recently.
One is a Rory O’Brien track frame, it has 2 sets of 4 digit numbers, one ending in 75, which I assume may be the year of manufacture. It also has a small crown logo at the top of the rear stays, the tubing is either 501 or 531, it’s difficult to read. Can anyone tell me anything about it please?
Second frame is a Mercian with horizontal dropouts, it has one 4 digit number on the underneath ending in 78, but also a number 1. Can anyone identify the model please?
Any info would be very much appreciated! Photos attached.
Kind regards. 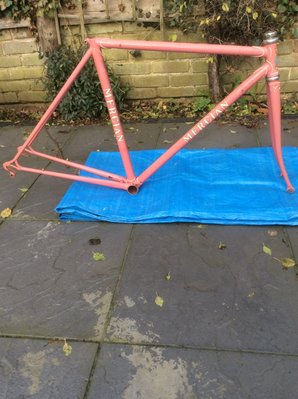 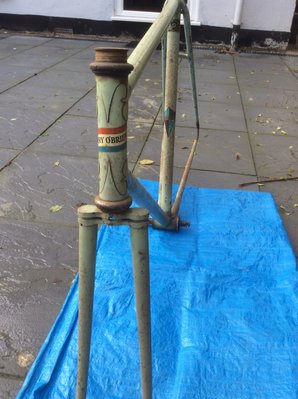 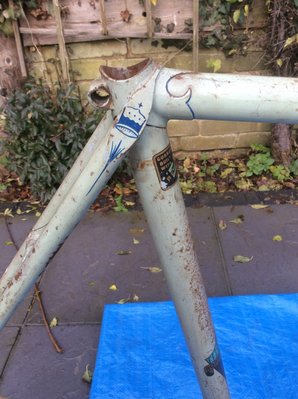 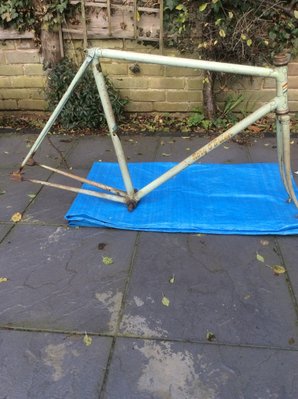 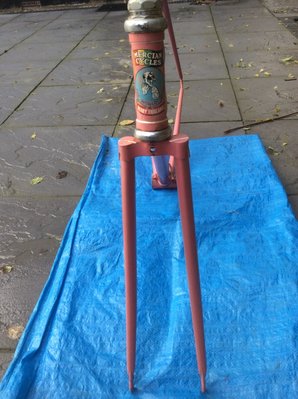 Rory O'Brian is 531. The decal suggests it's older than, say mid 70's, and 501 was not introduced till the 80's.
It has mudguard eyes too so probably a track/path which was a popular off-season choice for roadies in the 50's and 60's. And what a beautiful frame!
Current status report:
Back on two wheels in deepest Pastyland and loving every minute. Mission: to enjoy big, bad hills again.
Top

The Rory O'Brien is almost certainly a 'Championship' model by Les Ephgrave. this was the top of the range model. The Mercian should be dateable via the The Mercian Cycles Register. Have a look on the Classic Lightweights site for comprehensive histories of both makers and links to helpful sites
Top

Thanks Ugly I will do that. I may try calling Mercian tomorrow and see if they can identify the model by the number under the bb.
Top

Open up the bottom bracket on the Rory O'Brian. The shop mechanics often slipped their name inside on a piece of card. Fellow club cyclist Roger Joseph who worked for them and ran a cycle shop from his home in somerset got very excited when a Rory came into his shop. He opened the bottom bracket to find his callers card.

If you ever want to move the Rory O’Brien frame drop me a pm.
Top

Thanks rjb, how funny! I may well have a look.
Not sure about selling yet, I need to know what it is I’ve actually got first.
Top

the Rory Obrien frame appears to have a 531 transfer on it, and no 'T.I. Reynolds' marking, which dates it earlier than a certain point. It is built in track tubing; round section fork blades and round section chainstays tell you that even if the rear dropouts appear to have been worked on in the recent past so might not be original. However the rear dropouts are exactly in the manner you would expect a british track frame to have them; very simply made from fairly substantial steel plate; no fancy cutouts.

The mudguard eyes may or may not be original; are the front eyes done in an unusual way? Anyway this hints at dual purpose 'road-path' use, in which case the fork crown will be drilled but the rear bridge won't always be. A further clue to its original purpose is in the geometry; at one time a purpose built road/path frame would have a slightly lower BB, slacker angles and clearances for 27x1-1/4" wheels and tyres (although it would still be raced on sprints), whereas a purpose built track iron would be different in those three areas, but might have had mudguard eyes added anyway.

The mercian looks like a standard road (maybe TT?) frame; those look like long pattern campag dropouts, the most common sort used in the 1970s.

The fast back, shot in stays of the Mercian are lovely. A TT or road race bike for certain. If you measure the wheelbase probably quite short.

The Rory is a quite a different kettle of fish. It looks like the rear ends have been replaced, brazing burn marks on all four stay ends. If it was only in one side I would have thought a repair. But perhaps the previous owner wanted a more up to date drop out, check the spacing of the rear ends, (normally 120 or 110mm) if it has been spread to 126mm or bigger this is intended perhaps for gears. Either way a really lovely frame with the fancy long point lugs.

Of the two I'd say the Rory is the one worth holding onto and restoring. Track frames like this are in very high demand now and depending on rarity can fetch well over £500 among collectors. The Mercian, nice as it is its more common if you like, as they were a popular fixture among rathe racing fraternity of the era.
Top

Thanks Brucey and Polisman for your very interesting and informative input re frames.

I have spoken to Mercian who have suggested the Mercian may be a Vincitore, I measured the rear inside dropouts which are 120cm and 960cm wheelbase.

The Rory inside rear dropouts are 115cm with 1010cm wheelbase (measured from C-C as best I could). It does look like a ‘Championship’ frame as compared on the website the lugwork does looks the same. It would make a wonderful restoration project for someone but sadly the frame is too big for me.

Both these frames have hung in a garage for the last 30 years! The elderly gentlemen who has given these frames to me can’t remember anything about them, hence me asking for help.

Thank you all for your input, I very much appreciate it. Kind regards.
Top
Post Reply
11 posts • Page 1 of 1