For several decades the Campagnolo 'record', original gran sport (steel with brass knuckles!) and later Nuovo Record, Nuovo Gran sport and then Super Record rear derailleurs were acknowledged as amongst the most durable -if not the slickest shifting- rear derailleurs. However most models would only cope with a largest sprocket of 26T and the largest capacity (in the later Super record) was just about enough to cope with a 28T sprocket. Having short cages meant that the total capacity was pretty small too; a 10-12T chainring interval and a 14-26 or 14-28 freewheel was about it.

Campagnolo eventually launched the 'Rally' rear mech (of which there were several versions) but prior to that there were all kinds of DIY and cobbled together arrangements, often using parts from Simplex rear mechs; 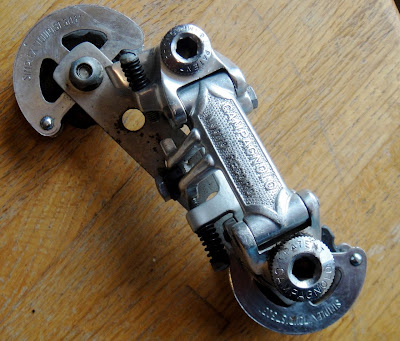 which were even fitted to bikes such as Rene Herse models BITD. Back then if you wanted something reliable it was that, or perhaps some archaic chainstay mounted mech if you wanted to run wide-range gearing. [ The Japanese were making wide range RDs but they were regarded with suspicion and not widely available; Simplex long arm RDs based on the parallelogram from their 'prestige' models racing mechs had a disturbing tendency to dive into the back wheel; no wonder conversions were popular.]

Back then the Rally mechs shifted worse than the NR mech they were based on, which meant pretty clunky shifts. That, and today's prohibitively high prices for genuine Rally RDs does rather put you off using one on a modern 'retro' machine. However with retrofriction levers, a more toothy guide pulley, modern sprockets and chain etc, shifting is actually not that bad.


I was contemplating making some plates to convert a NR mech for a retro build when I came across replica 'Rally' plates made by Soma.

these retail at £40 (eg from velo duo) and look nicely made. Making DIY plates is not that hard (it does require that you are able to tap M5x0.8mm threads for the pulleys and a (non standard) M6 x 0.75mm thread for the pivot bolt though) but it does take a while and you are most unlikely to do as good a job as this. Given that you can buy a short cage campag RD for reasonable money, conversions of this sort are appealing for a retro build that you want to have low gearing on. Once the plates are fitted the RD, the mech will usually accept a 32T sprocket and will have a total capacity of ~38T.

edit; in that picture there is a bigger mismatch in the anodising colour than I expected to see. 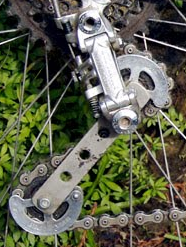 Q. does the stamping on the cage plate say "13-36 = 36-53" ? If so does this indicate the recommended sprocket/chainring range for this mech? it appears to say the something similar (maybe 54 not 53?) on the third version above, too. 36T is significantly larger than the usually reported 32T for this RD....? [thinking about it maybe 36T is only possible with a (fairly narrow) 5s freewheel; the guide pulley is moving upwards as it moves inwards with a wider freewheel/cassette..?]

I knew that Meccano clone I picked up in a charity shop could prove useful.

I have thought of doing something similar with a Mavic 840 mech I have. The jockey wheels had roller bearings originally but these had failed so I had to improvise with a bush. The mounting bolts are larger than current jockey wheels so you can't use commonly available versions and the Mavic ones are now unobtainium. https://images.app.goo.gl/3cXvDMjEZdrdsXgx7 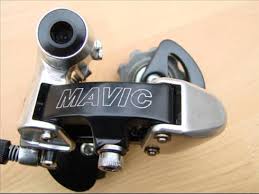 In the Colonies, Spence Wolf's Cupertino Bike shop,
had cage plates made, and sold their own brand long cage Campy.

rjb wrote:I knew that Meccano clone I picked up in a charity shop could prove useful.

I have thought of doing something similar with a Mavic 840 mech I have. The jockey wheels had roller bearings originally but these had failed so I had to improvise with a bush. The mounting bolts are larger than current jockey wheels so you can't use commonly available versions and the Mavic ones are now unobtainium.....

I don't remember if the Mavic mechs are exactly the same or not but BITD some makers mostly used larger ~5.5mm bolts through their derailleur pulleys. These makers included;

amongst others. Other makers (Campag, Shimano, etc) have always used 5mm bolts through their pulleys. [Some SRAM use 5mm bolts but some models are oddballs and use the weirdest pulleys imaginable.]

IIRC tacx pulleys usually come with reducers so that their pulleys can be made to fit mechs with different bolt diameters and lengths (basically everything bar the SRAM oddball ones), so if you have a RD which uses non-standard pulleys tacx are a good idea.

At a pinch there is another option; in 9s/10s XT/ultegra the lower pulley has a cartridge bearing and there is bushing supplied so that the dust covers are accurately located within the bearing which has a slightly larger bore. I beleive it is possible to install these lower pulleys (the upper pulleys are different) in mechs that normally use a 5.5mm dia bolt, by simply omitting the bush.

Also NB you can buy roller bearings quite cheaply, provided they have a 'drawn cup'. I would imagine that it is possible to refurb/convert pulleys with new roller bearings without too much difficulty.

I've heard tell of this but I'm not sure what those parts actually looked like; most of the photos on that page are, I think, of either genuine campag parts or mods that use parts robbed from other RDs. For example this 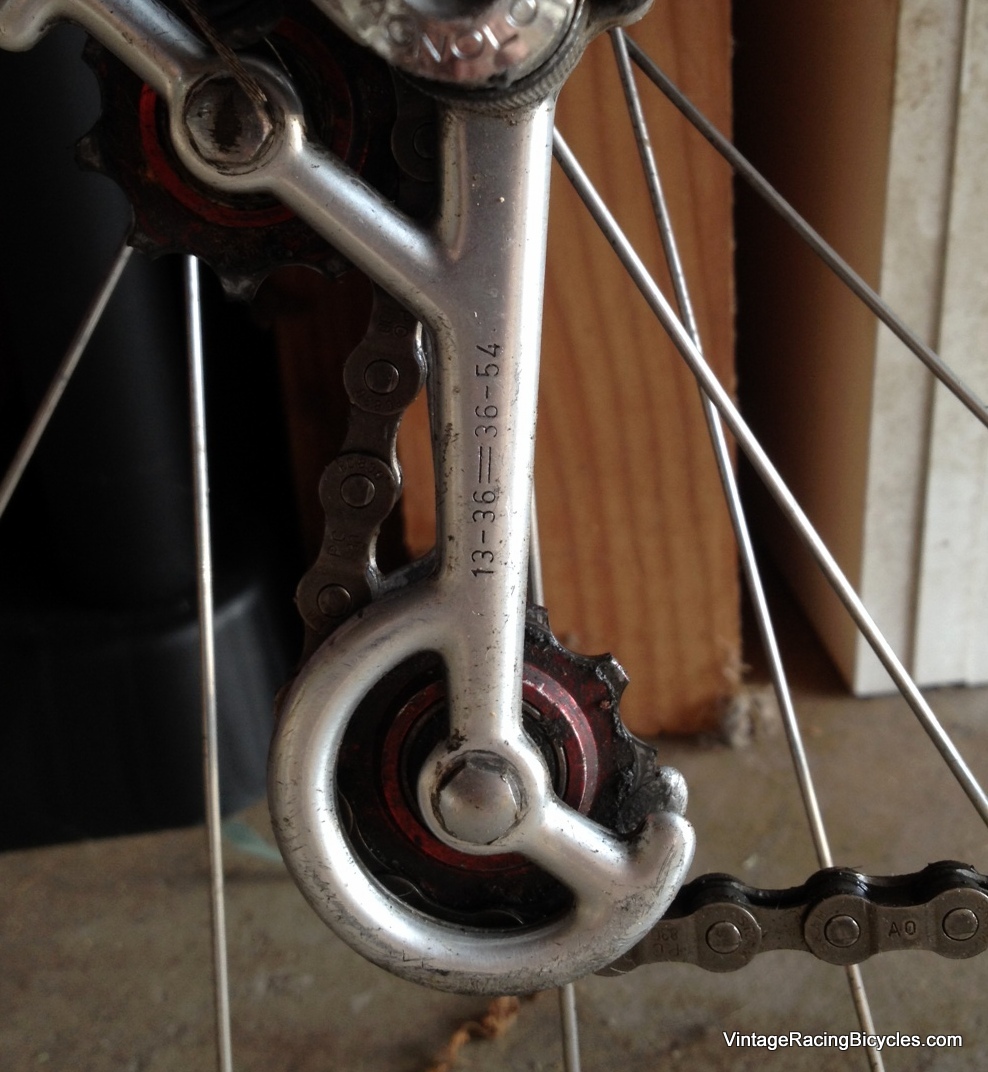 Just as an aside, re the third of Brucey's 4 photos pictures a Mech that Campag had to withdraw as it breached someone else's patent if memory serves.
Top

9494arnold wrote:Just as an aside, re the third of Brucey's 4 photos pictures a Mech that Campag had to withdraw as it breached someone else's patent if memory serves.

Sun Tour's patents included one that protected their use of a slant parallelogram, but the Rally doesn't use any such thing.

If anyone had a patent on a sprung upper pivot and a drop parallellogram then it is difficult to see who it might have been; both Simplex and Shimano made mechs of this sort at this time.

AFAICT the Rally mech is campag's first with a sprung upper pivot. However such things may have been in their minds for a long time prior to the introduction of this mech; for some time campag rear dropouts had sometimes included a small hole which always looked as if it was an anchor point for a spring in a sprung upper knuckle, but I never saw anything that actually used this hole.

Anyway the stories I have heard include

a) that the dropped parallelogram infringed someone else's patent
b) that the reinforced mech still wasn't strong enough
c) that the Rally mech "didn't look enough like a campag mech" i.e. that Campag appeared to be following others by using this design, not innovating.

I could believe any of the three above, but the last one rings truest to me; Campag always wanted to be seen as leaders, not followers. 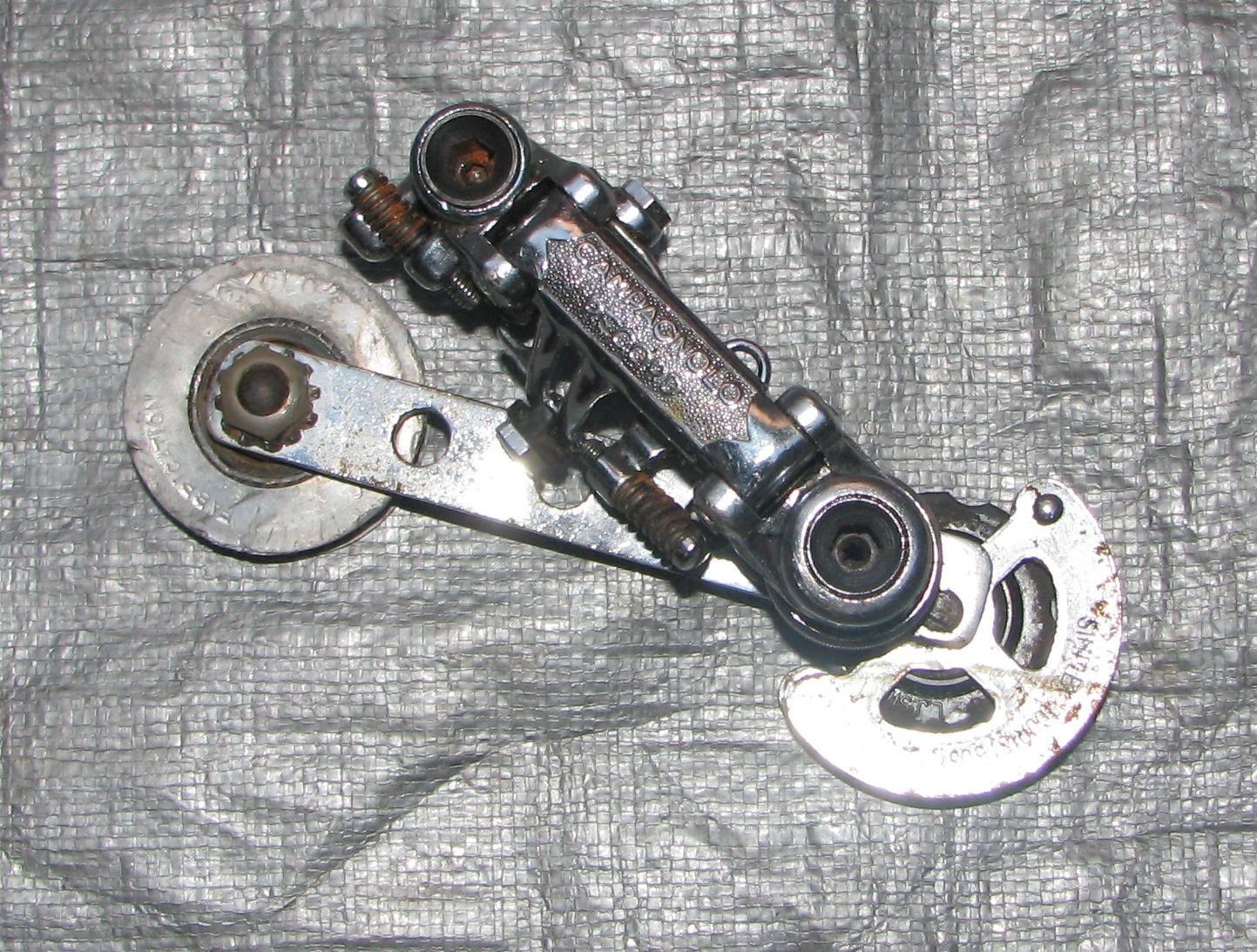 is attributed to spence wolf here ( https://midlifecycling.blogspot.com/2016/03/campagnolo-adapted-japanese-design.html) but the conversion parts used are a mixture of simplex, cyclo and meccano-esque.

DIY job from way back;

Note two-position cage plate, so that the RD can be tweaked for the freewheel in use; as pictured the largest sprocket would be ~24T (and shifting would be comparable to a standard mech) but once moved to the alternate position, more like thirty odd teeth would be possible.

[edit; in the text on that page, it says that the RD was originally fitted with a Spence Wolf conversion which was replaced with the 'more elegant' one seen in the pictures. The original Spence Wolf one is described as 'steel'.]

Simplex pulley parts in several of the above conversions are from the 303 'tourist' model, which was a rather prosaic pull-chain mech from the 1950s. Instructions and details thereof are to be found here;

this is the mystery variant of the 1010 dropout

note that this dropout is not drilled for a portacatena (needs two tapped holes), because there is only one (blind, IIRC) drilling and it is not tapped for a screw; I always imagined that a spring end (eg from a mech with a sprung upper pivot) was meant to go in the hole, but I don't know of any mech (campag or otherwise) that was fitted with such a spring. The only campag mech with a sprung upper pivot from around that time was the early version of the Rally, with the dropped parallelogram, but in this mech the spring is fully enclosed. Note also there an upstand in which the hole is placed. I have also seen the same dropout (i.e. with the upstand) but without the hole present. I think that these dropouts date from the early 1970s but I can't be 100% sure on that.

[edit; the photo upthread (of the 1970 Hetchins) appears to show the same model of dropout, i.e. with the upstand, but the upstand is undrilled.]

shows several different 1010 variants but not that one.

Anyone know the answer to this one?

says that such dropouts (with the mystery hole) were made from 1952 until the 1960s (in several versions) and the hole is meant for a spring fitted to the 'sport' mech.