SunTour 'New Winner' freewheel; state of the art in 1978

All this talk of Regina, Sun Tour quality reminded me of the Regina CX, with its splined remover - now that was a nice freewheel!

drossall wrote:I've still got a tool for taking apart Suntour (?) freewheels. Can't remember now exactly how it works. This one.

Also on Sheldon, near the bottom.

that is indeed the correct spanner tool for New Winner freewheel bearing adjustment; in fact it has no other use. One end of the spanner has pegs that engage with the lockring and the other end has pegs which engage with the adjusting cone. The adjusting cone end is pretty much a waste of time; because of the tab washer between the cone and locknut you should never need to apply any real force to the adjusting cone; it can simply be moved using a small screwdriver, once the lockring is slackened. In point of fact the other end is not that great either, mainly because the notches in the lockring are so shallow, the spanner pegs can very easily slip out of them.

fastpedaller wrote:All this talk of Regina, Sun Tour quality reminded me of the Regina CX, with its splined remover - now that was a nice freewheel!

yep, although rumour has it that most (all?) the Regina freewheels with the small splined remover were actually made by Maillard. They were certainly 'co-marketing' some products for a long time. You can find pictures of older 'Atom' freewheels with 'made in italy' writ upon them... 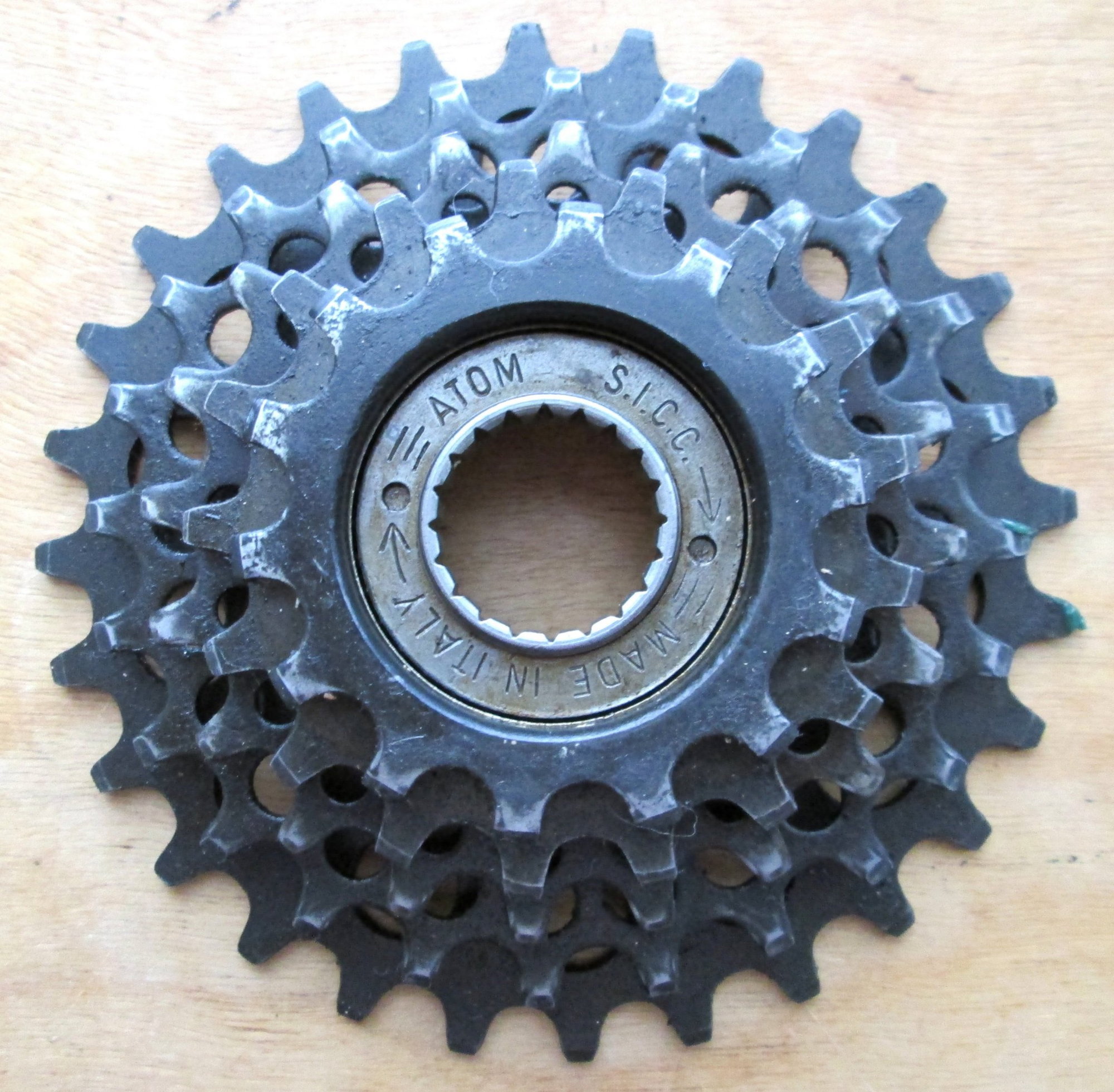 but apart from the lockring, the freewheel is otherwise indistinguishable from a Maillard Atom.

[edit; correspondingly the screw-on sprocket system used in the Regina Extra etc was also used in some older Maillard-branded freewheels.]

Another popular freewheel in the 1970s was the Maillard 'Normandy' model. 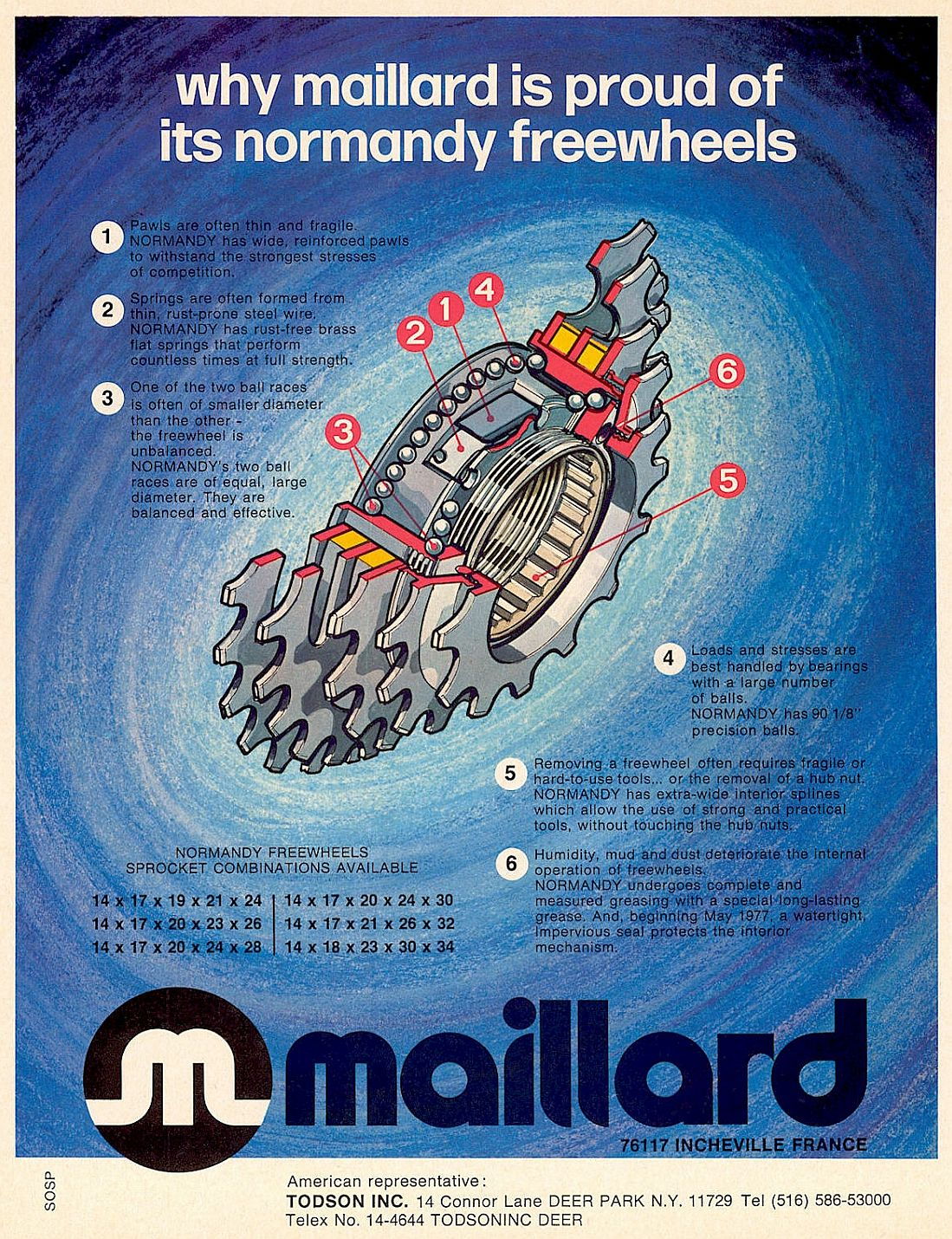 A point by point riposte to the above might read

1) Yeah, but your pawls are kind of long and flexy; furthermore they are designed to engage one at a time (presumably for low backlash), not both together (180 degree opposed pawls, working on an odd-toothed ratchet ring) . Breakages were not uncommon in Normandy freewheels.
2) Brass has a fatigue limit, unlike steel. Brass springs tend to break by fatigue; I have seen many broken brass springs in Normandy freewheels.
3)&4) Unbalanced? So are the loads. In practice the smaller ballraces in one side of freewheels make not a jot of difference to the operation of the thing; the most important thing is that the bearing adjustment is kept good and the water is kept out. Probably the bearings being set well apart (which they are not in the Normandy design) is a major advantage; having 2/5 sprockets overhanging the bearings is suboptimal by comparison.
5) The large tool was indeed easier to live with in a workshop. However when cycle touring, carrying the (large, heavy) remover added significantly to the toolkit weight.
6) The 'seal ring' was a neat idea but waterproof? Nah. It had the unintended consequence that overspray of chain lube was less likely to get into the freewheel bearings, so it was less easy to keep the bearings sweet, even if water and other crud was less likely to get into the thing.

The blurb mentions 'competition'. However this freewheel (which has sprockets very similar to the Atom 5s models I used to use) does not allow the fitment of competition-type gear ratios. The main issue is that the #4 sprocket can't be smaller than about 17T or something like that. In the 1950s maybe a 14-17-19-21-24 with a half-step chainset would be used in competition. But by the 1970s this wasn't the way it was done.

I guess the Maillard 700 compact was their response to the 'New Winner'. 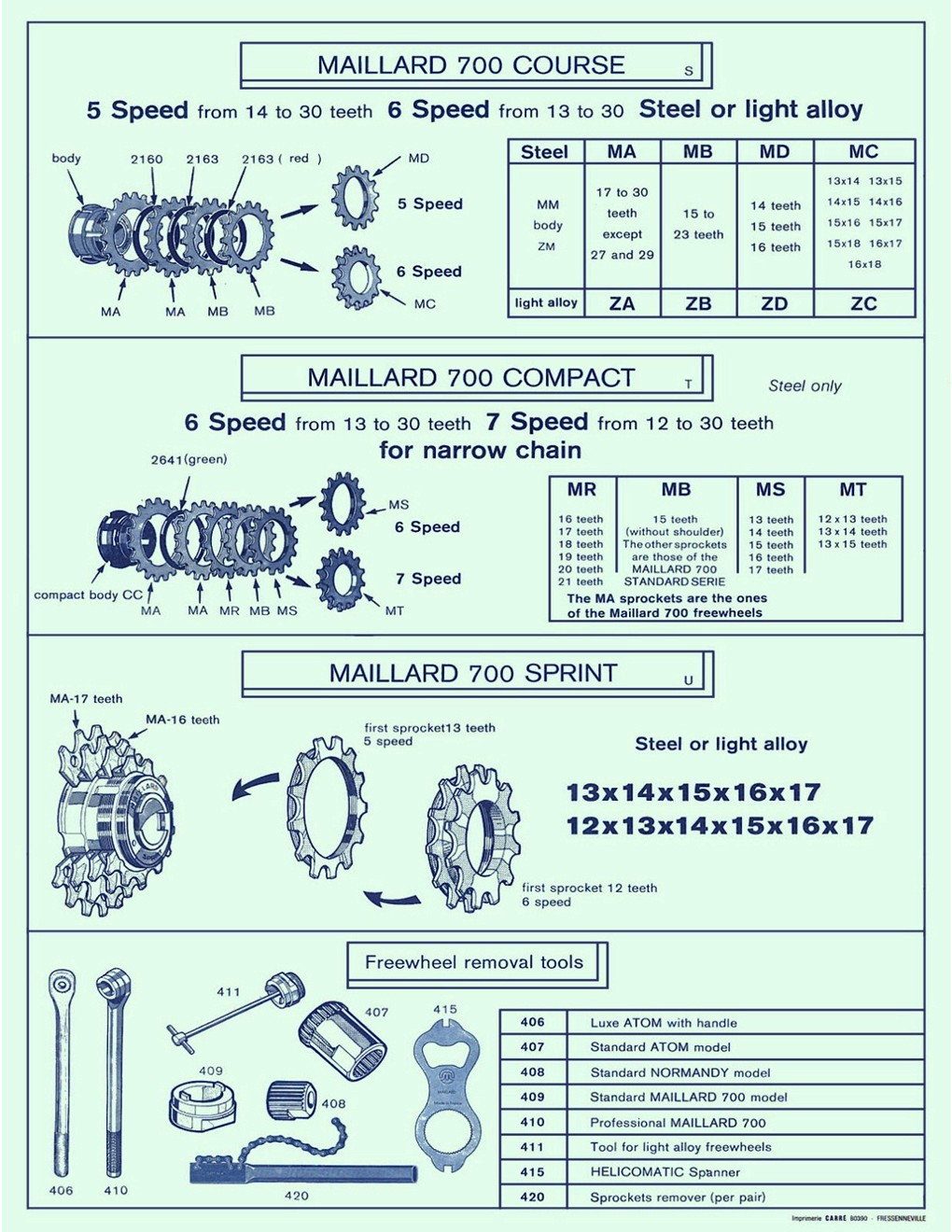 Like the New Winner, the largest sprocket that could be fitted to the third position was 21T; not altogether touring-friendly.

A boxed Regina Extra sprocket kit (pre 1979, before they had a 7s option) looked like this: 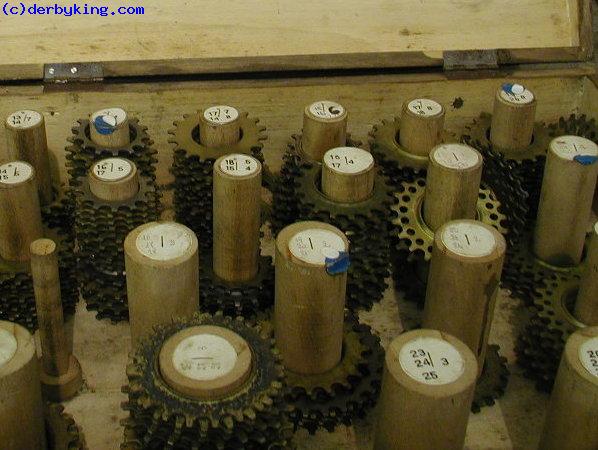 Presumably BITD pro team mechanics would have a kit like this in the van.

The photo is from this page http://derbyking.com/Detail/?n=23
which mentions that the Regina sprockets do indeed fit some older Maillard Atom models. It also mentions that one place the Regina America model was not sold was in the USA.

Some photos of the New Winner sprocket board there are a few rogue sprockets in the photos above, but in the photo below it appears to be populated with only SunTour parts. I've just spent a little while looking at the available SunTour catalogues on the Disraeli Gears site and it is interesting to see how things developed in later years for SunTour, in relation to freewheels and indexing.

When the Winner Pro (WP) and Winner (WT) freewheels were introduced, they could (having both threads and splines in the middle of the body) use the same sprockets as the older 'New Winner' (NW) models, and the tooth profiles were described similarly. In the 1987 brochures we have index-compatible 'Accushift' parts for the first time and these are (of course) only going to work with some SunTour freewheels. Some WP / WT and alpha freewheels are listed as index compatible.

However by late 1989 (when the 1990 catalogue was published) indexing is now described as 'Accushift Plus' (AP) and is available on both freewheels and cassette hubs. AP sprockets in that catalogue have angled/faceted teeth and are (to my eyes) not wildly different from uniglide sprockets. They tout bushingless chains as being a new thing, and it probably was, for them (ten years after the Sedisport chain was introduced...). There is no sign of any WP freewheels and the AP WT/alpha models all have different model numbers.

The change from Accushift to Accushift Plus was profound, in that the 1990 catalogue was almost entirely filled with AP compatible parts. However in the top road groups, the same shift levers and the same RDs were used as in 1987, just with different sprockets and chain, and that was suddenly 'Accushift Plus' too.

At about that time I had some Superbe Pro index levers (switchable between 6s standard spacing, 7s compact spacing and non-index modes) and a Superbe Pro RD, amongst other things, and AFAICT the shift ratio was the same (later orphaned) shift ratio as was used in Dura-Ace 7400 equipment. ( I sometimes used a RD-7400 too, but didn't have any shimano DA index levers amongst my road equipment). I'd also started using 7s cassette hubs from shimano, with UG sprockets. I found that the indexing worked with the cassette hubs, and it also worked with my NW freewheels, provided I was careful with sprocket spacing and I used a modified tooth form on the SunTour sprockets. It certainly didn't work at all well if I used the standard NW sprockets, which (AFAICT) were the same as the first WP sprockets, in terms of tooth profile/spacing.

I guess my experience exactly mirrored that of SunTour themselves; 'Accushift' in its 1987 form was pretty much half baked, even with recommended and matched components. It of course hardly worked at all when bike manufacturers used random combinations of freewheel and chain together with the SunTour index levers and mechs. No wonder they felt they had to insist on Accushift Plus sprockets and chain, once they had them -which was too late.... By contrast shimano hadn't put the cart in front of the horse in the same way; their UG tooth form gave good shifting and predated widespread use of indexing by some years; most UG sprocket sets worked OK with indexing whether they were meant to originally or not.

That Accushift Plus worked as well or better than shimano UG-based indexing turned out to be largely academic; bike manufacturers had lost faith and shimano's HG shifting had moved the game on anyway.

I finally dug out my homebrew-modified SunTour New Winner sprockets (except for the largest sprocket; for some reason I left that standard). 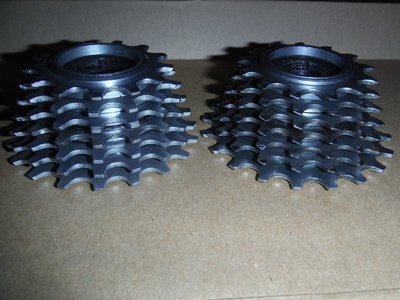 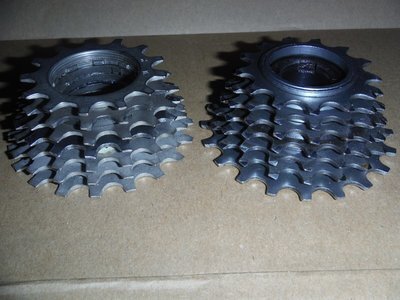 Shimano Uniglide 7s on the left, Modified New Winner on the right

The grinding operations to modify the SunTour sprockets are symmetrical and they entirely overwhelm any small chamfers that might have been on some of the sprockets to start with; this means that the splined 'A' fit sprockets become fully reversible and it no longer matters if the threaded sprockets started out life as 'T' or 'R' type; once modified it is difficult to distinguish between them.