For discussions about bikes and equipment.
Post Reply
54 posts

In my bits box I've got these mountings for down tube shifters. 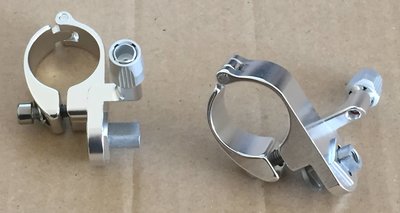 No branding on them but I think they are Velo Orange. Can't remember how much I paid for them but I know I wouldn't have paid Paul Component/Rivendell prices

JonMcD wrote:In my bits box I've got these mountings for down tube shifters.

Correction: These are on the Freshtripe web site where it says they fit both downtube and bar end shifters made by Dia-Compe and Shimano.
Top

rjb wrote:There's always these Shimano Palm Shifters as another alternative.
Could be a good alternative for anyone who suffers with arthritis.

Yes but they’re still competitively priced with the available quality stuff. My interest is principally in the shifters as they’re compatible with my (cable adjustable) Shimano mounts. Not knowing the Suntour XC Thumbies, I’m curious how much they might improve on the ‘feel’ and operation of 9sp Dura Ace friction. Which shifts very nicely in my opinion. I wonder how many shift clicks are in that, I’m sure I can’t detect it.

My apologies for straying from the DIY angle. I did try various positioning of the pictured shifters but found with drops and touring they were better suited on top. Incidentally I switched out the SL-BS50 (7) front shifter as it had the damned annoying middle stop. That disappeared on the SL-BS64 (8) and has miraculously reappeared on the SL-BS77 (9). Which I can live with on XT 44-32-22. I digress.

I’m through with indexing.

Brucey wrote:that Rivendell stuff looks nice, but then it ought to; by the time you have bought shifters and mounts, a front and rear setup costs $130 (US). Doubtless by the time it is retailed in the UK it'll be more than that. Blimey....

In my parts stash I've got a set of original SunTour thumbshifter levers (which are what the Rivendell shifters are a copy of) and cable stops; just a bit of fiddling about required to make/adapt brackets and I shall have a pair of shifters exactly where I want them.

FWIW I think (and have always thought) the best way of mounting a thumbshifter is beneath the handlebar, so that the pivot is also ahead of the handlebar; to get them mounted like this requires that the left shifter is mounted on the right side and the right shifter is mounted on the left side. In this position the lever can be worked using finger and thumb without appreciable loss of grip on the handlebars. BITD this is how I had my MTB thumbshifters mounted; on a rigid MTB loss of grip on the bars was often followed shortly after by a face plant.... I carried on with this scheme even with indexed levers, which meant that I had the rear shifter on the left hand side. Sounds weird but I soon got used to it.

In modern, affordable thumbshifters Sun Race make some pretty mediocre RH index shifters and a nicer LH ratchet shifter. It turns out that you can transplant the guts of the LH ratchet into a RH lever, so you can make a pair of ratchet thumbshifters. OK they are not SunTour quality and you need to buy three shifters to make the two you want (leaving you with an indexed shifter on a LH bracket left over, which you might never find a use for) but it is a lot less money than most alternatives. There is a leetle snagette though; the ratchet is a bit coarse; about 1.7mm cable pull per click. However this matches almost exactly with a Shimano Dynasys RD /10s cassette combination, such that two clicks will give one downshift. I think that this will give a kind of semi-indexed downshift; something I will be experimenting with. However with many other setups, I suspect the coarse ratchet will cause an overshift followed by a trim, every time, which could get tedious.

BITD SunTour powershift levers with one of their RDs on a 5s or 6s freewheel gave four clicks per downshift. Not sure how this compares with modern Dia Compe or Rivendell versions.

shimano friction shifting is (IMHO) usually pretty good, even if it is the fallback version when you have turned indexing off. I (controversially) might say that it is better than old school campag in fact. Some shimano friction shifters have a conventional friction device, but also a spring preload; even the humble SL-A050 left shifter has this 'light action' approach. Some old Dura-Ace friction shifters had it, as did the first generation Deore XT thumbshifters.

But.... SunTour 'powershift' is better. Like Simplex retrofriction, the friction clutch only ever moves in one direction, which means a lot of the irritations with conventional friction shifters (whereby a washer with two flats on it becomes worn, moves back and forth and slowly backs out the tension screw ) largely disappear. And the friction on upshifts is adjustable, but there is no friction at all in the lever on downshifts; you are only pulling against the cable friction and the mech spring. If you have not used such shifters before then do find some and try them out. (Simplex retrofriction have similar characteristics, but they can feel a bit mushy and vague, with no clicks, and have a smaller barrel so pull less cable. Some modern systems demand more cable pull than Simplex can deliver.)

Currently Dia Compe levers and the Rivendell ones use the same system as SunTour powershift did back in the day. I've already mentioned the SunRace version with its coarser clicks. The number of clicks in SunTour is/was a compromise between accurate setting in gear and a certain amount of 'overshift' on downshifts which used to be necessary/desirable with many systems BITD.

The least expensive way of getting a set of powershift levers is to buy a used set. However the most common sort would be a band-on fitting LD-1500

and IIRC the levers will only fit easily onto that suntour band. The ones above are for DT fitment, but they did a version with a 7/8" diameter clamp for stem mounting.

Suntour thumbshifters like these (LD-4700, LD-2800) have the same mechanism inside them (and are what Rivendell have based their lever design on) 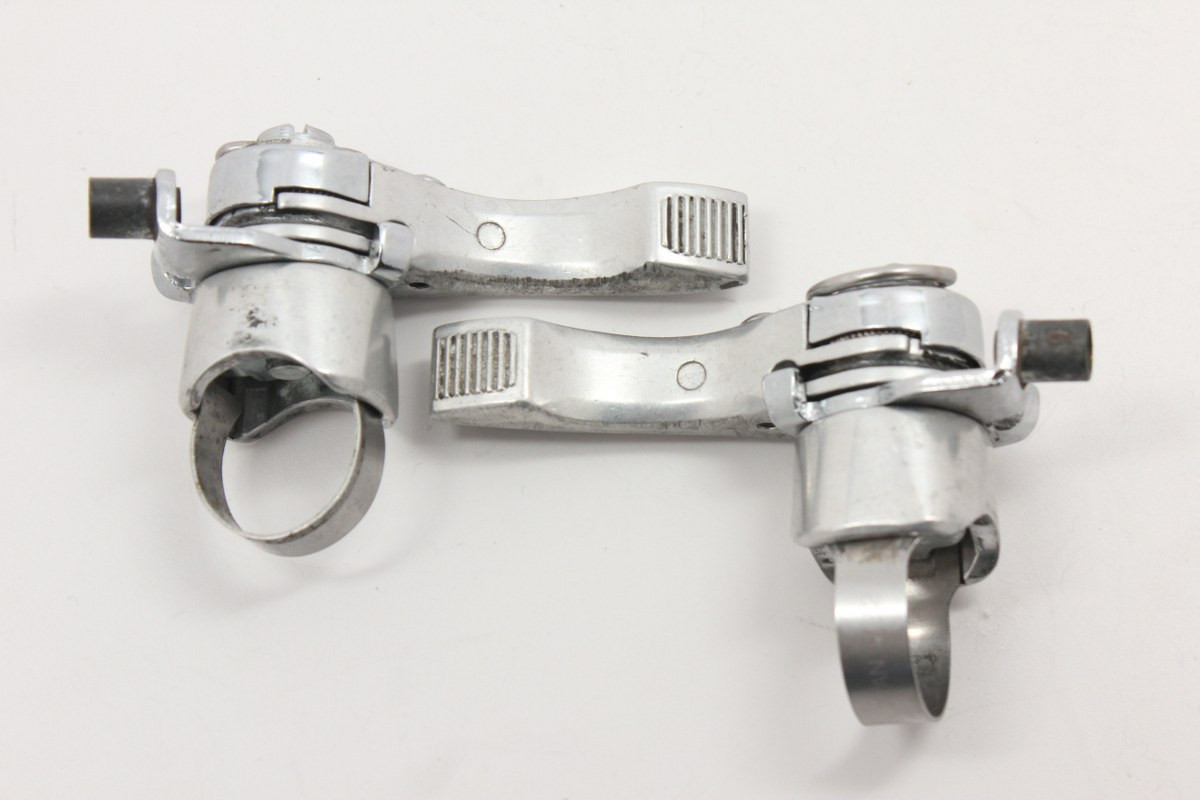 these can be mounted on larger diameter dropped bars if you are prepared to make a longer clamp band (not that difficult I think) . However they are both rare and sought after so don't expect to find any going super-cheap these days. Also these SunTour levers themselves don't easily mount onto other brackets.

There were also various Superbe, levers and others with powershift internals, some to fit standard DT bosses which will presumably also fit on modern 'thumbie' mounts. The LD-1500 style lever was made in bar end form for a long time, and IIRC they are not handed, so it looks like you have two right-hand levers when you have a pair.

The only word of warning is that there is a tiny pawl in the mechanism; I have once (and once only) seen this pawl break, which meant the gear lever was suddenly completely useless. If this happens on tour you would be in the poop.

After much searching there’s very little available with Suntour Power Ratchet bar ends. Must be bar ends. DC Gran Compe ENE levers and pods are best available option at about £50. DC Silver levers only at £40. Rivendell are $70 postage alone. Toyed with idea of fixing Suntour XC thumbies to end of bars. So Gran Compe’s or stick with DA. Don’t want long d/t shifters in there. 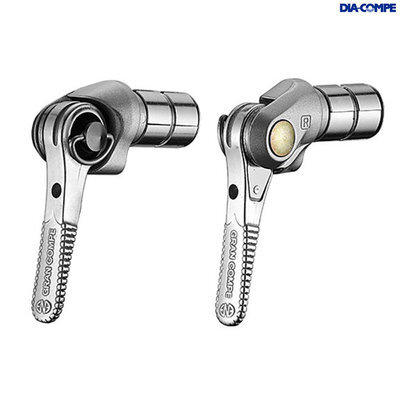 I don't especially care for bar end shifters myself; almost any other place on the handlebar might be preferable to me (*). They can get knocked quite easily, damaged in prangs etc. They are seemingly also strangely inviting to tamperers in a way that other shifters are not. But each to his own and all that. (*) the exception that proves the rule;

these are right where my hands want to be when climbing. [edit; so they would be in the way, and would really irritate me; I'd prefer them much closer to the stem.] They are also the wrong side of the handlebars (for me) too. I think these are the least expensive sun race thumbshifters (simple friction I think, no powershift), which have a steel clamp band, nominally sized for 22.2mm bars. I think these steel clamp bands have been opened up, fitted with long screws and clamped round the fatter (~23.8mm dia) dropped bars. The screws need to be about 5mm longer to allow this, and the ends of the bands need to be set to a different angle too. A little improvisation (e.g. welding) can extend clamp bands like these so that they will go round the larger centre bulge in dropped bars.

Sun Race SL-M10. About ten quid if you can find them. Cheap and (probably) not very good.

It wouldn't be anywhere as neat as the real thing but you could mount thumbshifters like these in the bar end position.

My favourite lever, position and shift will always be down tube, 7sp (6400) indexed. Moving from a 700c to 26” horizontal top tube the d/t position was too far away for comfort. That bike suited a top central bars shifting position - a good few of the shifts were simply a nudge and like you say a great position for climbs. Now I’ve built up a fast 26” semi compact where it just seems natural to have the lever 9sp friction shifting from the bar end. Yes they’re vulnerable there and I’m not sure I’d want to be roughing around on tour on a loaded bike with them in that position. So I’m leaning towards the Dia Compe ENE shifters. I couldn’t run Sun Race with Phil Wood touring hubs, unless there was a law against it. I want the best friction shift ever produced. Thanks for the Suntour education, shame the bar ends are all taken.
Top

nsew wrote:………….. I couldn’t run Sun Race with Phil Wood touring hubs, unless there was a law against it.....

bar end shifters LD-1400 have the similar (but not identical) guts to LD-1500 DT shifters. 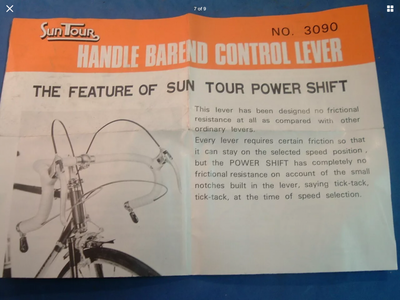 you might well be correct. Mind you 9s shimano only needs 8 x 2.5mm = 20mm cable pull, call it 21mm for luck. If the shifter uses a 19mm spool then that is about 125 degrees of swing. Quite possibly you would have to rework the bracket and increase the throw of the lever to get that.

I've just checked a set of band-on LD-1500 levers and I took the following measurements;

- the lever swings through ~170 degrees; the cable stop prevents a full 180 degree swing.
- the spool is 18.0mm diameter, so will have a 19mm working diameter with most gear cables
- the cable pull for a full swing measures slightly over 27mm
- there are ~34 clicks in a full swing, so about 0.8mm per click

So plenty for lots of shimano 'road' gear systems; shimano road 11s requires a nominal 10 x 2.7mm so something to bolster the cable diameter would be handy here. You would definitely need to modify a bar end lever if it has the same size spool.

And then there is Gevenalle (revamped Retroshift) with these type of shift levers grafted onto regular brake levers.

I don't know about availability but Microshift seem to have quite an array of shifters (including bar ends up to 12 speed indexed).

Incidentally, they seem to have some wide range 10x complete setups in the pipeline too.
Top
Post Reply
54 posts