For discussions about bikes and equipment.
Post Reply
54 posts

I've just checked a couple of other things. 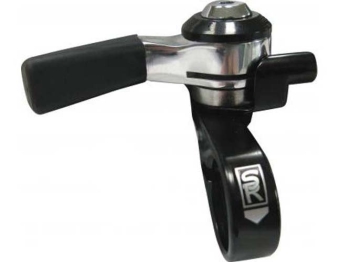 This has a ~160degree swing and has eighteen clicks (powershift style), pulling about 30mm of cable or slightly over, so nominally ~1.67mm (or a touch more) cable pull per click. The lever has internal stops in the base which limit the lever throw. If this can be modified (eg using a Dremel tool) then a couple of extra clicks ought to be possible, increasing the cable pull to between 33 and 34mm. However much more than this and the groove in the lever body for the cable will start to run out; it doesn't run around the whole lever. This is nominally a good match for shimano Dynasys 10s, which uses ~3.4mm/shift ~= two clicks. 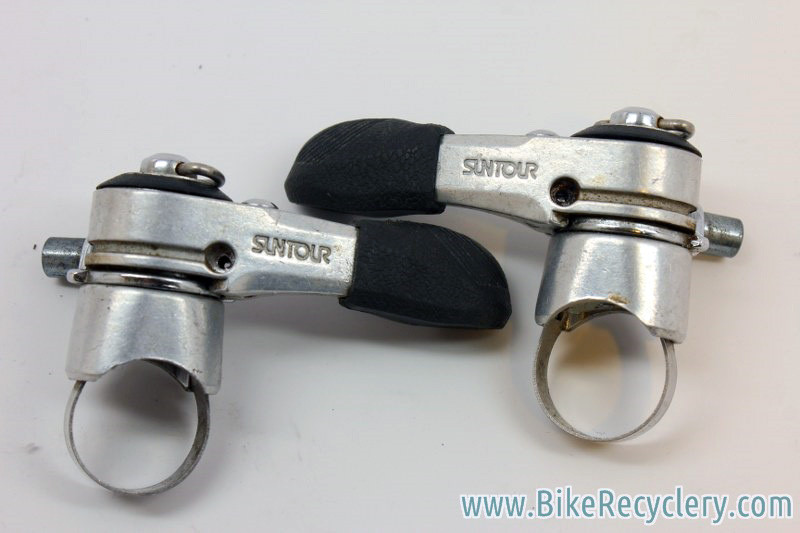 These have a spool which is 21.75mm dia and have a lever throw of about 170 degrees in standard form. Mine have a slight modification to the backplates which increases the lever throw to ~190degrees and this allows a total cable pull of over 40mm. There are about 38 clicks in 40mm, so a cable pull of about 1.05mm/click. One of the few RDs which would use an integer number of clicks for a downshift would be SRAM 10s, which uses 3.1mm/shift, about three clicks.

Where an integer number of clicks does not equal a 'whole shift' you can expect to be trimming the lever very often, possibly with every single downshift. For example many systems would require about 1-1/2 clicks with a SunRace R90 (LH) thumbshifter, which would be super-annoying. Sun Tour LD-4700 shifters would be almost as bad; many modern systems would require about 2-1/2 clicks per shift. I wonder how the Rivendell shifters and various Dia Compe shifters compare in this respect?

below is a setup using two modified SunRace M90 thumbshifters; 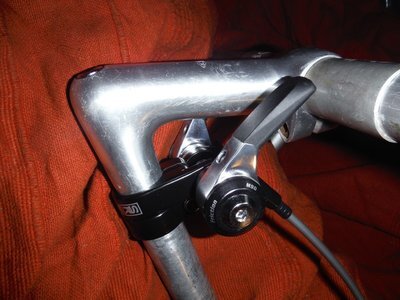 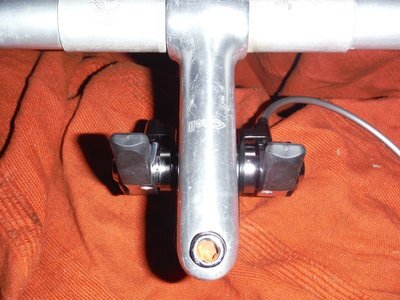 Both shifters use the Powershift style ratchet mechanism, which is not standard inside a RH thumbshifter. In addition the support brackets are differently handed from a usual shifter pair, so that both can be sat on the same mounting with the pivot axes coincident, i.e. the levers are level with one another. If a standard pair of thumbshifters is mounted thusly, they don't sit at the same height. To create this shifter pair requires parts from at least three thumbshifters. In the setup above they are simply clamped round the quill stem, but they could equally well be mounted to a simple bracket (like the ones upthread).

Brucey wrote:I've just checked a set of band-on LD-1500 levers and I took the following measurements;

- the lever swings through ~170 degrees; the cable stop prevents a full 180 degree swing.
- the spool is 18.0mm diameter, so will have a 19mm working diameter with most gear cables
- the cable pull for a full swing measures slightly over 27mm
- there are ~34 clicks in a full swing, so about 0.8mm per click

So plenty for lots of shimano 'road' gear systems; shimano road 11s requires a nominal 10 x 2.7mm so something to bolster the cable diameter would be handy here. You would definitely need to modify a bar end lever if it has the same size spool.

So if I’m understanding this, it would be no issue to shift 8 speed but 9 would likely need some modification. I imagine Riv / DC have simply increased the spool size?
Top

the RH 11s DC shifters use a larger spool; not sure exactly what size; I assume that it is large enough to shift shimano 11s MTB and SRAM systems. If Rivendell have increased the spool size the increase can only be slight, judging from the look of the thing. NB a lot of other systems don't need enormous cable pulls to make them work; if the width of the assembled sprockets is about the same then (with the same RD) the total cable pull will be the same too.

Using nominal cable pulls (in practice you might need an extra mm or two for adjustment purposes and to allow for the shift into top gear and bottom gear which uses a noticeably longer cable throw) the total cable pulls (nominal) are as follows;

So ~27mm is sufficient for all but four of the above; 11s shimano road and 10s SRAM are 'marginal' but might work with ~27mm pull available if the cable thickness is bolstered slightly. Dynasys shifting (10s or 11s) requires over 30mm. One of the configurations that will work OK with a SunRace LH R90 shifter is a 9/10 cassette (which will fit onto a 7s freehub body) and a 10s dynasys RD.

These. LD-1500 I believe. Will fit 8 sp cassette if those clicks are imperfect as you suggest up-thread. 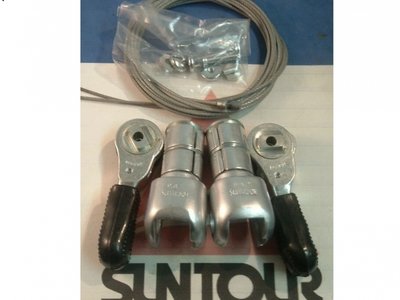 I think you may have to modify the RH lever mount, in order to increase the lever throw slightly. But provided you are happy to do this then they should work fine. I think you will need about 130 degrees of lever throw to get enough cable pull for shimano 8s or shimano 9s

I found this reply to the question (amongst others). From what I gather problems arise with 1:1 actuation of SRAM and modern MTB mechs. I’m practiced in filing to fit/work, so hopefully.......thanks for your help.

“I do it all the time. I keep a pair of Suntour Barcons on hand along with a modern 9 speed rear wheel and a Shimano 5700 RD. When I find a vintage bike I like and may be a keeper I attach the barcons, RD and rear wheel with 9 speed cassette to give it a thorough testing.”
Top

Here's a simple bodge to increase cable pull on a lever. The sleeve increases the effective diameter of the lever. I used the sleeve here from Twin and earth cable. Other colours and sizes are available to tweak your bodge. 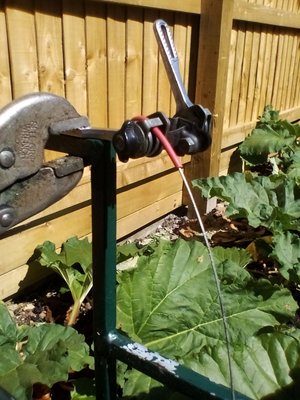 presumably that is a bit thicker than heat shrink? About the same as two or three layers of heat shrink perhaps?

(BTW that is quite a gear lever extension you have there....

It's even better with a stalk of Rhubarb attached. 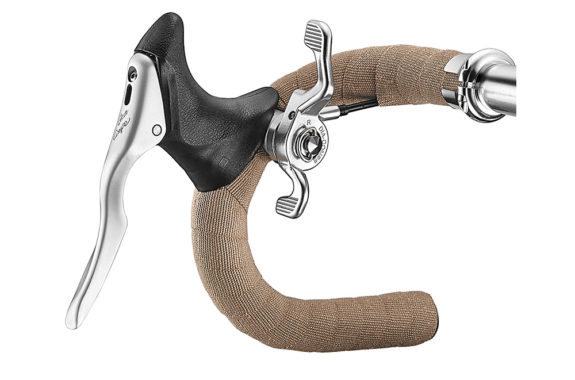 http://www.diacompe.com.tw/product/ene-wing-shifter/
Like the Suntour Commands, friction only I think.
Top

This seems the best thread to piggyback on, I hope.

I've never had an issue, but I noticed that the front shifter was bearing on the chain today (it has been stored for a while), so assumed it had been knocked. Turns out not, and it's constantly trying to shift to the small ring.

Before I go fiddling, is this a known issue - the semi-circular flip-up piece on top is tight, which is the limit of my investigations thus far