I have a pair of these hubs that I was thinking of building into some wheels. Can't remember when I bought them - they've been sitting around for quite a while, but I have read that this model had some problem with the pawls and freehubs failing. Was that the case with the entire run of this model hub, or did Shimano make changes during the model run to attempt to fix the problems? Does the code sticker on the rear hub (photo below) give any useful information regarding this?

the FH-M770 was 'new' in 2011, and was one of the first with this freehub body design; lots of blow-ups early on. Not sure when the FH-T780 came out. I think the date code 'MG' on your hubs signifies that they were made in july 2014. [I don't know what the other code 'Ia' means, anyone?] I would expect that your hubs would have revised internals and ought not to suffer the same the same problems as the first versions. However there have been isolated reports of problems with new hubs at any date; the jury is still out on that one.

My 2p's worth says that if there is the slightest free play in the freehub bearings, this seems likely (with this freehub design more than others) to precipitate further problems.

I've got the M785 (disc brake version of the M780) because it came with a touring bike that I bought and I am saddled with it, but I wouldn't choose any hub if this type if I was to build a wheel from scratch.
I have done about 3000 miles with no freehub body problem, but there are other issues to bear in mind witn this hub construction.

They have aluminium axels, which need to be made thicker than traditional steel axels and this leeds to bearing size being reduced, from 1/4" to 3/16" I believe. I also dislike the design of the locknut, that serves as a steel cap to the aluminium axel and makes adjustments a lot more faffy that previous Shimano hubs.

I don't mean to say that aluminium is a bad choice per se. I imagine the axel has been designed to have an adequate structural strength, but cup and cone hubs need to be serviced and adjusted regularly, the adjustment procedure is mostly trial and error and requires tightening and loosening the locknut many times (only made worse by the new locknut-cap design) and I fear that the aluminium thread won't be strong enough in the long run. I would feel more confortable "mistreating" the thread on a steel axel of the previous generation, XT M756 for instance, that can be sourced for 30 quid or less and has proven reliable for ages with no feehub body failures.
Last edited by Cyckelgalen on 4 May 2020, 8:08pm, edited 3 times in total.
Top

I have one of those rear hubs and it has done a lot of miles with no problems from the freehub. I think I did get some extra lube in it at one point but I do that with all freehubs that have done some miles.
Top

How did you get the lube in there? Did you take the freehub body apparat ?

My misgivings are probably due to the fact that I'm talking about a touring bike, for other less demanding applications these hubs are probably OK.
Top

I agree the cone adjustment is a pain using the new end cap-as-locknut. I also suffered an issue with one hub where the cone managed to grossly over-tighten itself against the bearings which resulted in a cone failure not long afterwards. Having to ensure the end caps are extremely tight to stop this happening again worries me slightly re the tensile stresses in the threads of the aluminium axle between the locknuts and cones.

The freehub body lacks a removable rear seal and so it's difficult to lubricate the bearings which I normally do with grease pushed into the seal gap. When my freehub body started skipping I tried immersing the whole body in motor differential oil but the fixed seal still stops oil from running through the bearings.

The non drive side bearings are small and caged, limiting the number of balls (OK, cage can be removed, but still: caged bearings in an XT hub???).

Finally, if I were going loaded touring or cycle camping I wouldn't be too confident knowing the rear axle is made from aluminium.

Overall not a good design and worth giving a miss I reckon.
Top

I also had a cone working itself loose while on tour and causing a lot of damage, but it was on a front T785 dyno hub, that has an identical cone, end cap-locknut and aluminium axel. I needed a whole internal assembly, RH cone etc which together add up to almost the same as a new hub. Quite disappointed there also, though I probably should have inspected my cones/hubs more often. Learnt the hard way.
Top

FWIW with any cup and cone hub the RH cone can precess unless it is locked hard (or better yet also threadlocked to the axle). If the parts are all steel, nipping the locknuts up hard is a good starting point. However in use, a good deal of the clamping load which secures the cone comes from the QR skewer. This means that if you want the RH cone not to precess, and you have not threadlocked the RH cone, you do need to make sure that the QR skewer is good and tight.

I happen to think the bearing adjustment system is pretty stupid on these hubs. Not quite as stupid as the bearing adjustment system on some other shimano hubs with fat axles, but still pretty darned stupid. Between trial adjustments of the cone and locknut, it is necessary to release and then reapply the QR tension, if you want the QR tension not to influence the final adjustment. You can't do this and move the locknut without removing the skewer.

I am tempted to suggest that this unhappy state of affairs could be partly overcome by grinding a couple of flats on the locknuts, so that they can be worked using a cone spanner, but I'm not sure that the wall thickness of the part is sufficient to allow that.

One of the cones is already fixed to the axel, weather threadlocked or otherwise I don't know. But it comes like that even when you buy the axel as a spare part.
I tried to place the pre-fixed cone on the RH side but IIRC that was not possible, at least not with the disc brake hubs. You have to make the adjustment on the RH side, the LH side with the disc mount allows no easy access to cone spanners.
Top

you need to remove the disc before you make hub adjustments on the LH side. You should never expect to routinely adjust hubs on the RH side, because it just gives more chances for precession to destroy the hub.

It is not the disc that is on the way, it is the splined interface the disc mounts onto.

Adjusting hubs on the RH side may not be a good idea but that is the way shimano expects you to do it, at least with some hub models. The dyno hubs, for instance, have to be adjusted on the RH, no way around it.
Top

I am pretty sure that is not the case; shimano don't even own up to the RH part of the DH assembly coming apart, leave alone that you should use it for adjustment purposes (*).

IME every disc brake hub allows access to the LH cone and locknut once the disc is removed, be it 6-bolt or centre lock type.

(*) and you shouldn't; repeated movements of the RH cone will cause the cone threads to break through the insulation on the wires; if this goes to a dead short the generator is usually scrap.

I stand corrected. The whole internal assembly on DH hubs screws onto the shell from the RH and the adjustment has to be done on the left. As for the regular hub I will give it another go at adjusting on the left.
Last edited by Cyckelgalen on 1 May 2020, 7:50pm, edited 2 times in total.
Top 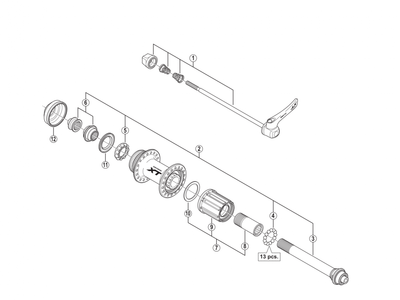 Indeed, the fixed cone goes on the RH and you should adjust on the left. Pleased to be wrong about that one too. So at least one thing is well thought out in these hubs.
Top
Post Reply
23 posts