Just spotted these. Expensive but look nice. Anyone tried them? What's power ratchet?
"Marriage is a wonderful invention; but then again so is the bicycle puncture repair kit." - Billy Connolly
Top

I like the look of them, but would be inclined to buy Kelly's Take Off and Shimano Dura Ace
9 speed down tube levers.
Top

A system also used by SunTour several decades ago. It is a fine toothed ratchet such that when you are changing to a lower gear (larger sprocket) i.e working against the spring of a conventional derailleur mech then there is almost no resistance in the lever which makes the gear change easier. When changing to a higher gear (smaller sprocket) working with the spring of a conventional derailleur the lever works as a friction lever. The aim is to make gear changing lighter and easier than a simple friction lever. I used some very happily many years ago when SunTour bar ends levers (Barcon) incorporated that mechanism.
Top

one feature is that as originally configured i.e. with sun tour levers and mechs on a 5s or 6s standard spaced freewheel, it was an integer number of clicks to make a downshift, four clicks IIRC , and this corresponded to about 3.5mm of cable pull. Kind of semi-indexed downshifts.

However it seems that there is unlikely to be a perfect match with a random pairing of power ratchet levers and a modern RD. The outcome of this is that with many setups you will have a non-integer number of clicks on a downshift, i.e. you will have to trim the RD with every downshift. This could get annoying, worse than if you just had a friction shift.

It seems very likely that with modern RDs and cassettes you are looking at between two and three clicks per shift with the old suntour levers. The 'modern' Dia Compe (and rivendell) modern powershift levers may be different to that, but if so, they are keeping quiet. If anyone gets the chance to measure the cable pull with these modern poweshift levers please add to the thread linked above.

Visually, look much like the Suntour Command shifter of about 30-odd years ago. My old Nigel Dean tourer came with them, and it was a very nice system. But with the Suntour shifter it was indexed to the rear mech, so really nice one-click shifts. There was an option to turn off indexing and revert to friction if alignment were lost. This "new" design seems to be a version of friction only.

I changed the Suntour after 20 years, when I concluded that the availability of Suntour spaced 7 speed blocks was getting tricky (didn't quite index properly on Shimano blocks, though could tweak it to work), my rear hub was wearing out, the brake lever hood covers were shredded, etc.. so decided that a more modern cassette hub and 8-speed was a better bet.

Tried the ENE DT shifters which also use the 'power ratchet' with 9 speed Shimano, but the ratchets weren't fine enough to get a reliable shift. Maybe better with fewer speeds?
Now using Sunrace (edit) indexed levers which give an agriculturally positive shift.
Last edited by iow on 18 May 2020, 9:36am, edited 1 time in total.
mark
Top

De Sisti wrote: .....would be inclined to buy Kelly's Take Off and Shimano Dura Ace
9 speed down tube levers.

De Sisti wrote: .....would be inclined to buy Kelly's Take Off and Shimano Dura Ace
9 speed down tube levers.

They'll be on my retirement bike* in October 2021

iow wrote:Tried the ENE DT shifters which also use the 'power ratchet' with 9 speed Shimano, but the ratchets weren't fine enough to get a reliable shift. Maybe better with fewer speeds?.

or more speeds? If this is the lever version with the larger spool on the RH lever this appears to be with using 11s 'road' or perhaps even Dynasys MTB RDs in mind. 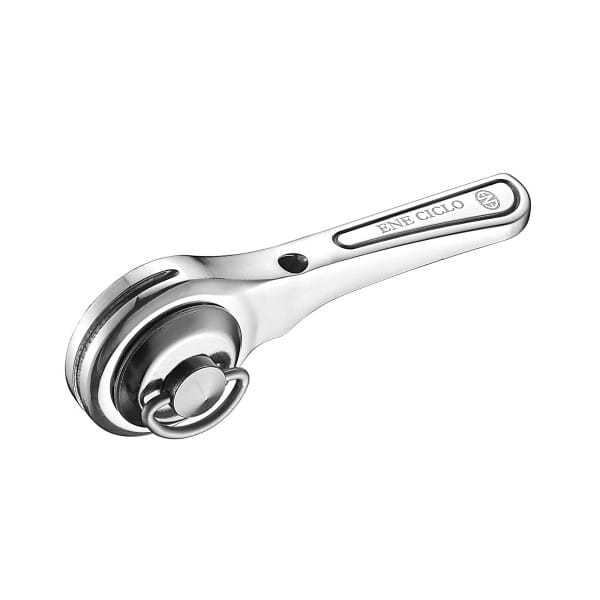 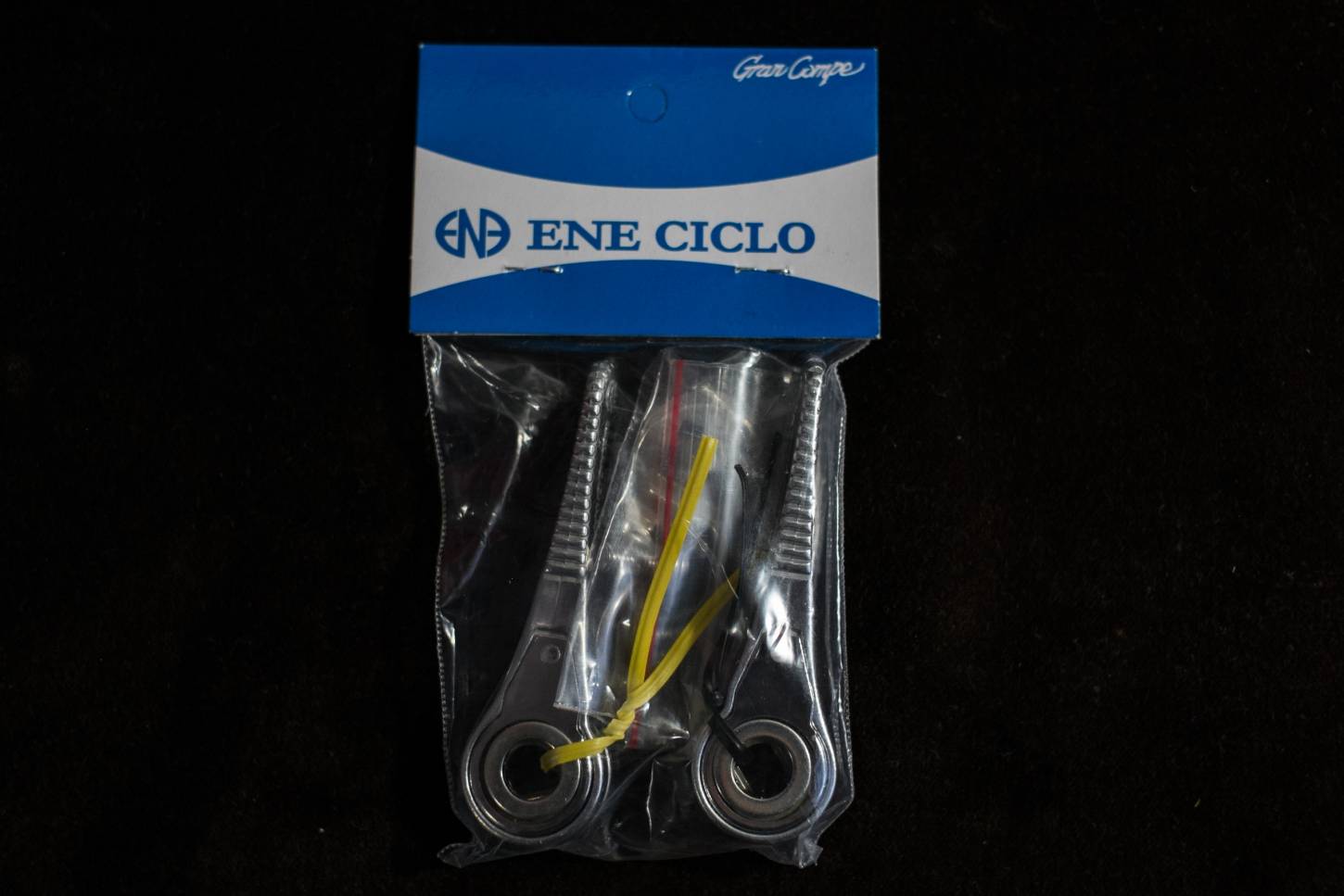 Wing shifter appears to have a large spool too? 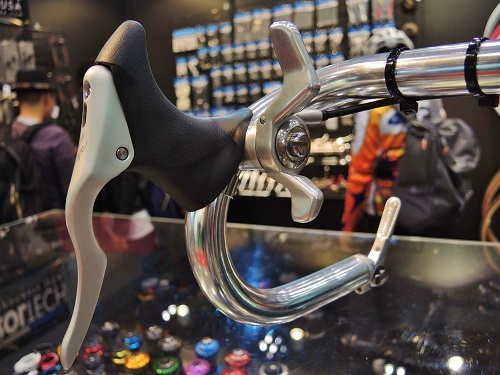 wings on your fingers, bells on your toes....

If you still have the levers is it possible for you to count the clicks/measure the spool diameter/measure the cable pull per click?

I think it is quite possible that if there is a small non-integer number of clicks per shift with these levers, it'll be annoying to use them, giving an inconsistent shift and requiring a trim following every downshift.

Of all (indexed) shifting systems Shimano 9s uses the second smallest cable pull per shift, only beaten by early shimano 10s 'road' shifting. It is therefore very likely to suffer this kind of problem.

Interesting that 9 speed is close to being the most fernicaty! The image in Brucey's photo makes them look gorgeous. Shame there is some doubt that they will work well in terms of semi-indexing
"Marriage is a wonderful invention; but then again so is the bicycle puncture repair kit." - Billy Connolly
Top

iow wrote:Tried the ENE DT shifters which also use the 'power ratchet' with 9 speed Shimano, but the ratchets weren't fine enough to get a reliable shift. Maybe better with fewer speeds?.

If you still have the levers is it possible for you to count the clicks/measure the spool diameter/measure the cable pull per click?

Mine are the small spool version. There's 60 clicks in a complete revolution and the cable track diameter is c. 20.62mm. If my basic maths are correct (probably not!) that gives c. 1.08mm pull per click.
Maybe the lever can be timed to provide more reliable shifting with 9 speed?
mark
Top

This means that two clicks ~ 2.28mm and three clicks is ~3.42mm. With 9s you need ~2.5mm per downshift and 2.28mm isn't (reliably) going to be enough. Three clicks will give a shift but you will need to trim with every shift.

However two slicks is a pretty good match for shimano 'road' 10s (except for 4700), ~2.3mm per shift. So maybe that is what they were angling for.

For other systems you would need more cable pull per click ( working diameter) to reliably get the enough cable pull, using the same 60-click mechanism, two clicks per downshift. So for example

So by that logic actual spool diameter of 24.4mm (for shimano road 11s) or 31.0mm dia (for dynasys 10s) or a bit smaller for 11s dynasys would make sense. I don't have any measurements for the '11s' ENE shifters so I'm unable to confirm this.

(edit; the small spool shifters are pretty close to working 10s dynasys with three clicks per shift, but would need a swing of almost 180 degrees...?)

That would really irritate me! You either want it to be indexed or not!
"Marriage is a wonderful invention; but then again so is the bicycle puncture repair kit." - Billy Connolly
Top

fatboy wrote:That would really irritate me! You either want it to be indexed or not!

well I call it 'semi-indexed' when a whole (integer) number of clicks corresponds accurately with a downshift; upshifts are still friction. I guess in (my) order of preference

So the same shifters might be the best or the worst of the bunch depending on the RD and sprocket pitch being used.

IMHO it is a shame that no-one has resurrected the old 'clickless' Simplex retrofriction lever mechanism; that is truly versatile, being infinitely variable; the problems being that all such levers were over 30 years old now, and all have a short total cable pull. So they will just about manage a shimano 8/9/'road' 10s setup, but little more than that, I think. If used with a larger spool, the mechanism would probably need revision, with a larger diameter in the clutch itself or more turns on the drag spring.

fatboy wrote:That would really irritate me! You either want it to be indexed or not!

The Power Ratchet mechanism is to prevent the cable from slipping, ye olde Campag friction
shifters would change gears when you stood up on a hill and the frame flexed a bit.
The ratchet prevents the cable from being pulled back, and out of gear, nothing like
having your bike auto shift to a higher gear on hill.