For discussions about bikes and equipment.
Post Reply
69 posts

If you've read my bit of the article in Cycle about building your own perfect bike, you'll know that for quite a while I’ve been using a 9-speed MTB mech (XT Shadow) with 10-speed 105 STI to shift an 11-36 cassette on my road bike; but now Shimano make a gravel mech, that's designed to work with road shifters and MTB-sized 10-speed cassettes, namely the GRX-400, I intended to try it. Don't get me wrong, the 9-speed mech has always worked okay in this 10-speed system, it works perfectly now I've stuck some 10-speed pulleys in it, but I hadn't got around to that when I started thinking that the GRX, being made for the job, might sharpen up the shifting a bit. (Actually I'd got a frayed cable, where I couldn't see it inside the shifter, and replacing that really sharpened things up.)

Any doubts I had about whether GRX would work with my existing 10-speed road STIs were swept away when I read in this article on Shimano’s USA website that GRX parts are “Fully Compatible ... with your existing parts” as long as the speeds correspond. And in particular: “Shimano GRX 400 components work great with the 10-speed Tiagra road groupset”.

I’ve got news for you: the GRX-400 rear mech does not work at all with 10-speed 105, and probably not with any 10-speed STI that came before the latest ‘4700’ version of Tiagra – the only tarmac group still made in 10-speed by Shimano. So I think that site is a bit misleading. What it says may be true, but only if your existing parts didn’t exist before 2016!

I’m afraid I haven’t been reading Cycle closely enough these past six years and missed the Technical Editor’s Important Notice: Stock up with spare Shimano 10-speed road mechs and shifters NOW, because newer components will not work with your existing system! What's that? There was no such notice! Oooh dear. Never mind, there are still quite a few, probably not too worn out, on eBay.

Be that as it may, whilst investigating the GRX-400 mech I found the reason it doesn’t work is it wants a longer cable pull per shift. Not nearly twice as much – like Sram ‘1.0’ and Shimano ‘Dyna-Sys’ – but just a little more – like Campag. Hey! I’ve got 10-speed Ergopowers on my tourer, currently shifting a Shimergo-modified XT Shadow mech over a 9-speed 12-36 cassette. I’ve also got a spare 10-speed chain and 11-36 cassette, so rather than do a lot of very precise measuring I simply swapped those and the GRX-400 onto this bike. And they worked they were made by Campag! Thanks to this instant upgrade I shall no longer need the Shift-Mate and Dyna-Sys mech I recently bought. And unlike a MTB mech, the GRX-400 does have a built-in cable adjuster. The one thing I don't like so much is the stop screws need a 2mm allen-key to adjust. It's a bit like not enough cup-holders in a car review.

So hows about that? Shimano have quietly altered their 10-speed shifting to be compatible with Campagnolo! This means that any bike equipped with Campag 10-speed Ergopower can now have much lower gears, simply by fitting a 36-toothed MTB cassette (requiring a Shimano-type wheel, hub or freewheel body) longer chain and the Shimano GRX-400 mech. Now there's progress! 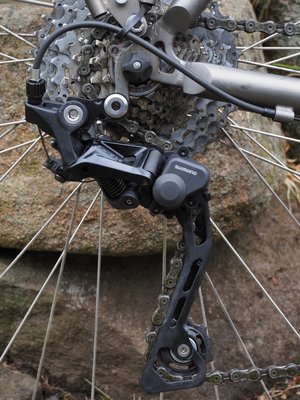 Thanks for that tip CJ, at last I may be able to get some proper low gears on my audax bike.
Top

Shimano have quietly altered their 10-speed shifting to be compatible with Campagnolo!

Shimano matches campag? It would be nice, except it doesn't, not quite.

If you connect a shimano 11s road mech (which is the same as 4700 10s) to a campag 10s shifter the resulting confection works, but imperfectly. It is imperfect for two reasons;

I've measured and posted the actual RD movements that result about nine months or a year ago. You can respace a (non-carrier type) shimano 10s cassette to make the shifting perfect, using the measurements I have taken.

Brucey wrote:….. I've just done some experiments with a campag 10s shifter and a shimano 11s mech and I see what you mean about overshifting (i.e. the mech moves too far) in the lower gears.

cf shimano 10s spacing which is 3.95mm. Most of the cumulative error appears in the shifts on the larger sprockets.

I have Campag 10 working very nicely with a constant gap between sprockets.

Before Highpath retired and sold the business they made aluminium spacer kits specific to the thickness of the sprocket manufacturer in use. I use Marchisio and have had a set of Highpath constant width spacers in use for probably 6 years. The set up with this is a Campag Comp Triple rear mech with 2010 Centaur levers. The levers are the ones with the sloping piece at the front of the hood and were the last of the old Ultrashift before Campag changed the levers and changed the rear mechs to the modern shape. These work click click perfect.

I recently got hold of some damaged Record levers of the older design with the rounded nub to the hood, the first 10 speed. Having repaired them I took the Centaur off and fitted these which are also click click perfect.

In stock I have a Campag spaced Ambrosio cassette which also has constant width spacers. Perhaps these things work because an over shift here is cancelled out by an undershift there.

Perhaps I have lower expectations and my definition of "click click perfect" is because I have never experienced a set up with a Campag cassette, nor have I experienced a modern fully Shimano set up.

Now we know that there are 2 generations of Campag 9 with different cable pulls. I think the same applies to Campag 10. I remember when I was building the machine with the 2010 Centaur levers and Comp rear mech that Campag said that these levers were the last design that was guaranteed to work with the old shaped rear mechs, but might not be so good with the new (to my eyes ugly) modern mechs. So if the modern mech changed its cable pull, so did the levers at the same time.
Top

Brucey wrote:1) the campag shifter uses cable pulls that are not uniform .........

You've said this before, but not why.

What about the front end. What mech are using with the ergo's. The reason i ask is because i am using 10 speed ergo xenon shifters on a shimergo 8 speed double set up and i had to use a xenon front mech which requires less force to operate. To reduce chain rub on the cage i had to "adjust" it using a hefty pair of pliers.

1) their 10s cassettes are unevenly spaced, with one bigger spacing in the middle of the cassette. [NB This still exists even in campag 10s cassettes which have uniform spacers, because one of the sprockets is effectively 'shouldered'. Aftermarket cassettes may not share this feature. ] There is a longer cable pull in the shifter to match this larger spacing

2) all RDs need a different cable pull between the leftmost sprockets vs the rightmost. The extent to which this is required varies with RD design. Campag 'nominal 1.5:1' is different from shimano 'nominally 1.5:1' in this respect, with campag's low gear cable pulls being more than is required for a shimano RD (which are also non-uniform but in a different way).

My understanding is that the campag shift ratio has stayed the same in all 10s and 11s systems, and that the reason there might be an incompatibility between later shifters and other equipment is because the spring tension in the derailleurs is different. If you use older derailleurs with newer (cheap) campag shifters, the shifters clap out even faster than they do anyway (which is already too quick) because the older mechs have stronger springs in them.

You can often live with all kinds of slightly imperfect shifting. However imperfection just eats into the system tolerances. For example using shimano 7s shifters etc with an 8s spaced cassette will work, and you might even have a system that will still work +/- one click on the adjuster. But if the match is perfect, the tolerance might be +/- 2 clicks instead. More in hand for when everything gets a bit worn out.

I have also observed that folk don't all have the same idea about when a system is working well or not.

Thanks for the report Chris on the Shimergo option.
On my "old" bike I have classic Shimergo; 10 speed Campag Ergos, and a 8 speed Shimano LX mech/cassette. I'll make some notes about this alternative when its time for a maintenance replacement of cassettes, chainrings, etc..
Top

They've actually been making triples for years.
I should coco.
Top

I did this on my latest tourer but couldn't quite get the indexing good enough. I found it overshifted slightly, as in moved too far per click. I got there in the end by respacing the cassette - I am using a Hope hub with an 11x Shimano freehub and were it not for the extra 1.85mm I would not have been able to get all 10 gears in with the required spacing
Top

1) their 10s cassettes are unevenly spaced, with one bigger spacing in the middle of the cassette. [NB This still exists even in campag 10s cassettes which have uniform spacers, because one of the sprockets is effectively 'shouldered'. Aftermarket cassettes may not share this feature. ] There is a longer cable pull in the shifter to match this larger spacing.

Thanks for that, but I'm going to check later today on my old Campag Centaur 10sp 12-30.