For discussions about bikes and equipment.
Post Reply
6 posts • Page 1 of 1

I merely thought about outrigger bearings about 35 years ago, when it still might have been a Really Useful Thing. But a combination of sloth, lack of the right bearings, lack of skill and me being hooked on SunTour freewheels at the time meant that it, for me, remained just an idea. The SunTour freewheels I used had a small centre bore that didn't always run true, so there would have been problems fitting a useful bearing to it.

Unlike me others (eg 'rjb') went ahead and actually made and fitted such things and made it work. {I will post a link to the thread in which this is discussed, when I've found it https://forum.cyclinguk.org/viewtopic.php?f=5&t=61819&hilit=Suzue.]

IIRC the recipe used was to take an imperial sized 'R6' bearing (3/8" bore, 7/8" OD) and fit it to a modified freewheel, with a shimano extractor spline (or similar) . The last few splines in the freewheel body were ground down to accept the bearing. Provided you have a deep freewheel extractor tool, or you have not ground off too much from the spline this still leaves enough of the spline to allow the freewheel to be removed, and of course the 3/8" bore on the bearing is a perfect fit on the intended hub axle, being a Suzue tandem hub.

I've gone a slightly different route, given that freewheels vary and QR hubs use 10mm axles.

I bought a packet of R6 sized bearings (I have hubs with 9mm, 3/8" and 10mm axles that need outrigger bearings) and I've done the following (in this example for a 10x1mm threaded Maillard/Normandy axle). 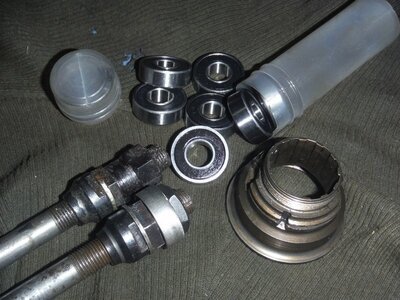 The modified axle with the outrigger bearing is in the foreground 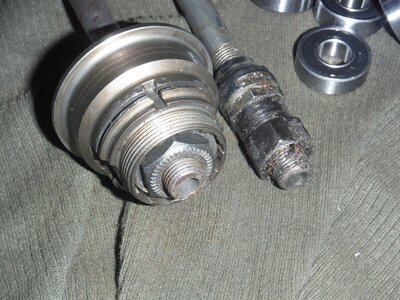 In the photos above the axle with the outrigger bearing is for 120mm OLN, 5s. The other maillard axle is a longer 126mm one, showing that there is greater need with ~6s/7s spacing, and bags of room for threaded spacers etc. Also shown is the 7s shimano freewheel body centre used for mockup. If I get brave enough I may try with an 8s freewheel.

The bearing bore was ground out to ~9.8mm using a dremel tool, at which point it became a snug fit on the chosen axle. The OD was ground down to about 22.0mm using an angle grinder, to match the intended freewheel. In both cases the bearing was mounted such that the part that was being ground could spin freely; the grindstone/wheel was varied in approach angle so that the bearing was spinning but there was still not pure rolling contact (which might result in no material removal).

The spacers either side of the bearing might have needed a relief on them, but in fact flat-faced spacers didn't drag on the seal. The RH cone is locked via a separate locknut behind the bearing, so that it can be as tight as it needs to be without overly clamping the bearing. Belt and braces means the RH cone is threadlocked too. The RH outer locknut is a shimano one, which is made of harder steel than Maillard ones (so may not deform under QR loading) and has a heavier texture on it (so ought to grip the inside of the horizontal dropouts better).

This was all made easier by the fact that lots of hubs use 10x1mm threading, so there were lots of spacers, locknuts etc in my bits box that I might have used. However this is not so much the case with 10x 26tpi threaded campagnolo axles; the outrigger bearing may have to be placed further leftwards if (say) campag Nuovo record locknuts are used (because they are thicker) and if a threaded locknut/spacer for the cone is required, it may have to be manufactured from an old cone or something.

Yes, I could've done with this 30 years ago - I used to bend axles quite regularly. A really good proof of concept - it certainly make you wonder why the manufacturers didn't do it back then. Freehubs are one of those genuine improvements amongst a plethora of manufacturers creating real problems by solving imaginary ones!
Top

Thanks Brucey. This is a valuable reference, I will bookmark it and will have a go at this in due course for a couple of rebuilds that use Campag freewheel rear axles.

May be a bit of trial and error to make things fit but will be well worthwhile to avoid axle and potentially frame damage. I experienced a cracked dropout on a frame (fortunately repaired by welding), likely not helped by a couple of broken Campag Chorus axles. Anything to prevent such issues will be good.

MartinC wrote:Yes, I could've done with this 30 years ago - I used to bend axles quite regularly. A really good proof of concept - it certainly make you wonder why the manufacturers didn't do it back then. Freehubs are one of those genuine improvements amongst a plethora of manufacturers creating real problems by solving imaginary ones!

Exactly my thoughts too. From the mid eighties I have a beautiful Maxicar rear hub with a bent axle, the bearings suffered from the bent axle too. The front hub is still fine and could be used if I didn't generally ride a dynamo hub on that bike now.
Top

The axle in the photos is planned to be in the rear wheel I'm building for my Witcomb project. This will (to start with) have a 14-26T 5s freewheel, which will gave a reasonable range of gears even with an old-school racing chainset 42-52 or similar. I won't be climbing the alps on that bike or be racing either, so it'll be plenty of gears for its intended use.

How well it all works will be quite dependant on how true the freewheel bore runs once it is installed on the hub; there are lots of tolerances which could add up to major problems. Maillard Normandy hubs were never the most accurately made, so if it works OK with one of those hubs it should work OK with better ones too. How the load will be shared between the RH bearings will be a question of how the clearances are between the various parts and (of course) how the hub bearings are adjusted. A small amount of axle flex will be tolerated before a fatigue failure is likely, and of course sudden impacts that might normally bend an axle ought to be better withstood.

Assuming 5s, 6s or 7s provides enough gear ratios of the right sort for you, the two remaining big issues with freewheels are

a) bending/breaking axles and
b) breaking DS spokes.

Well, touch-wood, I have not broken a spoke in any wheels that I have built for decades.

If I can make this scheme work with other vintage freewheels such as Regina, Sun Tour, Maillard, I shall be chuffed to bits. However these have a different centre bore so this will require a different approach to the bearing, probably a smaller/weaker one, but there are roller bearings to consider too. In the meantime even if it only works with Shimano-pattern freewheels, that'll still be incredibly useful; Sun Race freewheels (which have a very slightly different centre bore dimension) can use the same bearing for example and there are slick-shifting 5s, 6s, 7s freewheels of this type which are not that expensive.

FWIW if threaded spacers/locknuts are required between the outrigger bearing and the RH cone/hub bearing, probably these will be best made using modified track nuts in some cases.

Nice one brucey, when i did my mod originally i tried to grind down the external circumference of the bearing but found it too difficult. It was far easier to run a nominal 22mm stone through the freewheel which removes enough material to enable the bearing to slip in and crucially leaves enough depth on the splines to enable freewheel removal with a standard tool, once you have removed the bearing.

If you have a 10mm axle then using standard size bearings of 10mm id and 22mm od means you dont need to perform any grinding.

there are many different bearings out there; I needed some 3/8" bore ones anyway and having bought a packet I thought I might was well try and modify them. Part of the rationale was that supposing I have three different axle diameters (which I do, being 9mm (SA X-RD), 3/8" and 10mm) and (say) three different freewheel types being 22.2mm, 22.0mm and one other ( and I suspect it will be several others past that) then if I chose a separate bearing for each task then I'd end up with lots (nine or more?) of different sized bearings to cover all the bases.

As soon as I realised that, I knew I might be better off at least trying to modify things. If I modified bearings then there would be no risk to the freewheels themselves and I might be able to get away with keeping a smaller stash of spare bearings.

Possibilities for other freewheels include

The last option may work OK with freewheels which have a slim body and overhanging sprockets, eg some Maillard 'Atom' models.

It still leaves me with the original nettle which I failed to grasp decades ago, which is fitting a bearing to a SunTour Freewheel with an imperfect centre bore. The only way here is to machine the freewheel, nothing else for it. I'll probably not wreck the freewheel even if the machining doesn't work very well. On the other hand if the freewheel centre is 'all-hard' then I might be able to grind the centre bore well enough that I can install a set of loose rollers which run directly onto the inside of the freewheel, set with a small running clearance so that they only contribute when needed.