When I travel in France by TGV I take my bike in a bike bag which necessitates some dismantling.
I was thinking of using some in line cable splitters to facilitate this.
Does anyone have any experience of using them or what effect they would have on gear cable adjustment in particular ?
Does a splitter provide a secure link for the brakes - that would be an important consideration

Moulton bikes routinely use what are referred to as turn-buckles - photos below
As far as I'm concerned they are dimensionally stable and the actions of seperation and joining makes no difference to the selection of gears (or to braking in the case of the Moulton...) 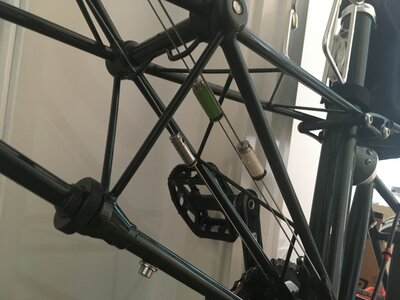 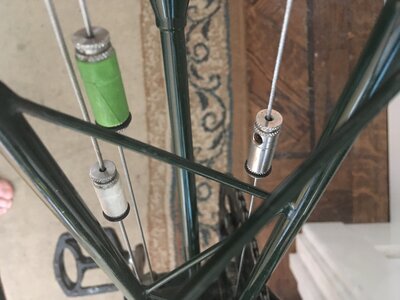 Dunno what bike you have, but I'm more than familiar with cable splitters as I have a Moulton TSR.
They split fore and aft.

They aren't cheap, but if you do a search, you'll find them.
https://fudgescyclestore.com/product/mo ... e_splitter
These people aren't the cheapest so you can find them at an easier price.

The "front end" comes from the gear selector and goes into the splitter and an Allen key tightens up the end. You cut off the excess.
The "back end" takes another cable and the nipple sits in it. The other end goes to the gear mech.
They work just the same for the rear brake cable.
This means that each gear and the rear brake have the requirement for two cables.

The Moulton comes with three. Two for the gear mechs, and one for the rear mech.
Mick F. Cornwall
Top

We have them on our TandemTuesday, no problem, gears stay still in adjustment, think SJSCycles sell them.
Cheers, Rob.
Top

Frames with S&S or BTCs with cable splitters would enable you to fit a full size bike in a much smaller bag than would be otherwise possible. They can be retro fitted to a metal frame by a decent frame builder.
Top

I recall that a heavy-handed friend managed to pull a brake cable from its seat in a turn-buckle once, however the fault may have been mine by not tightening the grub-screw enough. They are formed of two unequal halves, a cable-with-nipple (you will have to double-up on cables inners...) passing through the longer half, and a grub screw holding the bare wire in the shorter half. This can seem inadequately secure to unbelievers, however, provided they are tightened sufficiently you can have absolute confidence that the system will hold the cable together properly. Cables seperating under braking stess is not something that is ever raised by "Moultoneers", to my knowledge.
byyeee,
SiE
Top

you could recycle the screw on end of a Sturmey Archer 3 speed cable.
Top

FWIW the Moulton splitters cannot be used on many 'normal' bikes because they are too fat and clonk incessantly against the frame tubes if installed in normal cable runs. I also think that the way the grub screws are shaped/positioned in the moulton splitters is sub-optimal; severed cable strands are not uncommon. IIRC others may be slimmer than that and/or have rubber bumpers on the outside, and/or use two grub screws in tandem, and/or don't use cup-pointed grub screws (which are more likely to damage the cable IME). Finally the way the nipple is located in some splitters is poor, such that the nipple won't rotate freely in the fitting when the parts are screwed back together.

On paper I like this design the best (of those I have seen) for brake cables on 'normal' frames. 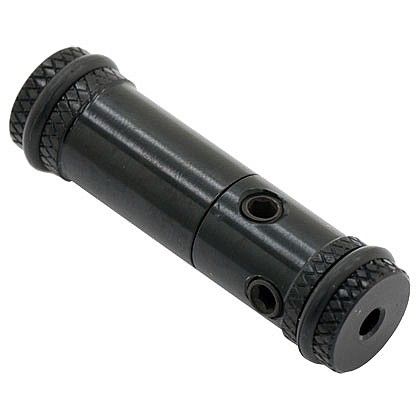 It is still quite fat though. I have no idea if the rubber rings are more durable than those on moulton splitters (which tend to be lost after a fairly short while).

I would also comment that many of the designs on the market are not perfectly secure when tightened by hand; they can loosen and back out. Quite why they are not fitted with flats so that spanners can be used to tighten them, and/or drilled for small allen keys to be used as tommy-bars is quite beyond me.

Many rinko systems split only one cable or even no cables. So it might be worth showing what kind of bike/packing scheme you plan to use; there might be a different workaround.

FWIW I don't think many suppliers refer to cable splitters as 'turnbuckles'; this term is more normally exclusively associated with a (non-bicycle) cable/wire tensioner which uses both a left and right handed thread in a buckle fitting to allow a cable to be tensioned.

BTW gear cables (which only have ~12 strands in) can be protected from damage in most splitters that are drilled ~2mm dia and will accept a short length of ~2mm OD brass tube, such that a gear inner will go inside the brass tube. When the grub screws are tightened the chances of the cable being damaged are greatly reduced.

BTW you can avoid the use of splitters in brake cables entirely by simply using non-aero brake levers of the right type; in many cases the cable can be unhooked from the lever entirely.

You could try this.
Before I bought the fourth splitter ........... for the SA hub ............ I used a "chocolate block" wire connector. Cut one apart and extract the connection and the cable is clamped at either end.

The good thing about this method, is that you can use only one cable.
Nipple at the shifter, cut the cable and fit it into the connector, and the rest of the cable can go to the mech/rear brake.
Fit a couple of Allen bolts, and the splitting is easy. 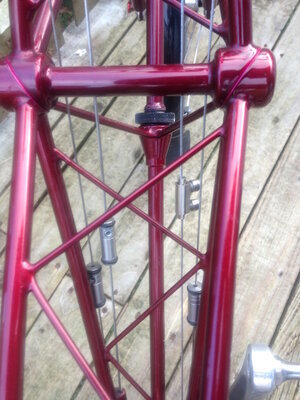 ...I don't think many suppliers refer to cable splitters as 'turnbuckles'

Probably a Moulton club thing - that's what I picked up from chatting to them at club meets. Suppliers no doubt would be baffled and perhaps try to sell you something for a yacht! Dictionary definition of a yacht: " A wooden-lined hole in the sea, pointy at one end, flat at the other, into which the owner pours limitless amounts of cash..." 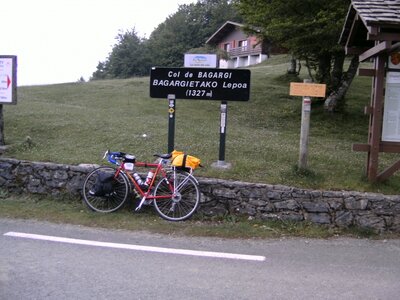 Thanks for all the replies.
Something to think about there.
I have a couple of bikes which I use for touring- one being a dedicated touring bike - which I have in mind to use this year - it doesn't have many outings.
This is the touring bike.
As you can see it's small - 50cm - which helps.
I take out the wheels and remove the rear derailleur - I have an ahead set adaptor and I remove the bars and place them parallel to the frame and strapped to the top tube. reverse the pedals and remove the racks. Reverse the forks. With plenty of padding it goes into a bag which conforms to the TGV permitted size requirements and will allow me to place it on a horizontal rack if required.
Being able to separate the inner gear cables would make things a little easier.
It's a bit of a pain doing this as I usually have to do dismantling/reassembly in a station. However a couple of hours either end on a two week tour isn't a problem for me.
Top

Presumably the front brake cable can stay attached then? If you have 'ergo bosses' on the downtube (which unbolt) and/or a slotted cable stops (eg for the rear brake), I'd expect you to be able to get enough slack in the cables without splitting them? FWIW I usually unbolt the RD from the gear hanger but leave the cable attached, then just lash the RD to the chainstay. Spare toe straps or re-usable zip ties help here.

which conforms to the TGV permitted size requirements

I bought a folding bike one year to fit in with travelling on the TGV - god that was a mistake! Bless it's little socks, it folded up OK but it was horrid to ride. I sold it as soon as I got back home, bit the bullet and bought a Brompton. It was called a Brilliant micro, which was half correct, in that it did fold up small...
byyeee,
SiE
Top

Brucey wrote:Presumably the front brake cable can stay attached then? If you have 'ergo bosses' on the downtube (which unbolt) and/or a slotted cable stops (eg for the rear brake), I'd expect you to be able to get enough slack in the cables without splitting them? FWIW I usually unbolt the RD from the gear hanger but leave the cable attached, then just lash the RD to the chainstay. Spare toe straps or re-usable zip ties help here.

You've given me a couple of ideas there Brucey.
I hadn't thought of removing the down tube bosses. Also I hadn't thought of a slotted rear cable stop.
Like you I always tie the rear derailleur to the chain stay.
Cantilever front brake with a slotted hanger so that isn't a problem.
Thanks for help.
Top
Post Reply
15 posts • Page 1 of 1