For discussions about bikes and equipment.
Post Reply
154 posts

Came across this youtube video which has some interesting insights.

Came across this youtube video which has some interesting insights. 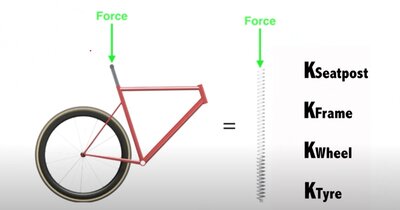 Whilst they may not be pertinent to frame compliance, how your fork reacts to surface imperfections is pertinent to bicycle comfort. By removing all discussion of the front forks, (their material and design) one feels that the link is somewhat disingenuous in reporting the facts
Top

Well, yeah. He's talking about vertical movement in frames not bike comfort. Ostensibly. He rather muddies the waters by also talking about seat posts and tyres, and the Trek he rode with 22mm tyres and a short seat post and a narrow saddle - about from which he doesn't mention saddles at all. Talking of saddles, I'm not sure I totally buy his initial statement that comfort can be equated with vertical compliance. A cheese grater has a lot of vertical movement, I wouldn't like to sit on it.
Top

Steel is real, so is rust. Viva Carbon fibre.
Top

Several years ago, Spa had some prototype steel Audax frames built by a different factory. Some numpty decided that instead of following the drawing, it would be a good idea to make the 3 main tubes of bigger diameter tubing than that specified, so we had the chance to ride back to back bikes with the same tyres, pressures, wheels and forks; the only difference was the main frame tubes were oversized in one lot. Some of the local roads had been top dressed with those big, rough granite chips in a little bit of tar, and riding the "oversize" bikes on those roads felt like having the soles of your feet beaten with a stick. One of the lads had injured his ankle getting out of bed somewhat hastily, and he found riding the oversize bike was quite painful for his injured ankle.
So there was a readily-apparent difference between frames built with different diameter steel tubes; but the difference wasn't what I had expected.
Bike fitting D.I.Y. .....http://wheel-easy.org.uk/wp-content/uploads/bike-set-up-2017a.pdf
Tracks in the Dales etc...http://www.flickr.com/photos/52358536@N06/collections/
Top

Yeah, right up until your first serious 'off'... I've thrown my tourer down the road too many times to remember, and it 'steel' comes back for more...
Top

You can see rust and manage it. It's much harder to spot cracks in the glue and string or do much about them.

Maybe we can agree both are better than those bikes with no fatigue limit?

Early on he says
"I am not suggesting there is no difference in ride feel or quality between bikes made of different frame materials..."
He then goes on to prove there is no difference in comfort.
So where's the video measuring the difference in ride feel and quality? They're no more subjective than comfort.
There's nothing new in this, if you use one criteria to demonstrate a point you can determine the outcome by choosing which criteria you use.
All he's demonstrated is that the double diamond frame doesn't deflect much in the vertical plane, then says he's going against conventional wisdom. He isn't, no one has said otherwise.
Last edited by PH on 4 Jul 2020, 4:48pm, edited 1 time in total.
Top

Whilst I'm on this thread I do wonder if there's not a little bit of conflict of interest - after all koga are mostly known for their aluminium frames, and the guy in the clip is sponsored by them...
Top

anyone know how a typical cyclists distributes their weight through a frame. What percentage of our weight is going through the seat in relation to the bottom bracket and bars? On a rougher surface I'm thinking most will be through the BB.

I have never road anything other than steel so can't compare.
Top

Until someone does some high quality measurement and analysis of the movement of the frame, seatpost and saddle underneath multiple riders while being ridden, e.g. using accelerometers or similar, I'll remain sceptical of the real world significance of the results of those laboratory measurements.
Top

I was somewhat sceptical of the conclusion he was going to draw when, within the first few seconds, I noticed he had chosen to ride a bike with straight forks.
Winter had arrived in the land of Kernow. Along with it came wet roads and cool winds.
“Oh, my wheels and coupling rods!” Peetee exclaimed.
Top

Pebble wrote:anyone know how a typical cyclists distributes their weight through a frame. What percentage of our weight is going through the seat in relation to the bottom bracket and bars? On a rougher surface I'm thinking most will be through the BB.

I have never road anything other than steel so can't compare.

Maybe this explains 531Colin's experience that the oversize, therefore stiffer, frames produced discomfort felt through the pedals rather than saddle or bars.
Top
Post Reply
154 posts