by RobC
I've been enjoying the odd trip out on my restored prewar tandem lately. It's got a 1938 AT hub (AW internals with drum brake), and old style quadrant shifter on the top tube.

With the cable adjusted to be as taut as can be for normal shifting on the workstand, in actual use it can jump out of 1st into 2nd, and even occasionally enters the dreaded no mans land between 2nd and 3rd. Not ideal. I assume this is due to the flex of the frame, and am I right in thinking this could be made worse by the lack of any outer cable at all (as is the setup with the quadrant shifter)? Perhaps also the now 80+ year old shifter is a bit worn and unreliable. Seems solid enough though, if hilariously basic to modern eyes.

If so, and added to the fact that I wouldn't mind having a regular trigger shifter in the cockpit (even though it will then cease to be 'period correct..'), this would mean I could have some outer cable going all the way back to the stays, but I don't fancy my chances finding a sturmey cable long enough. As is, a standard cable just about fits the length required for the top tube quadrant shifter on a tandem. An alternative is giving shifting duties to the stoker I suppose, and though this isn't ideal in normal circumstances, with only 3 gears to play to with I reckon it would be less of an issue in terms of arguments... 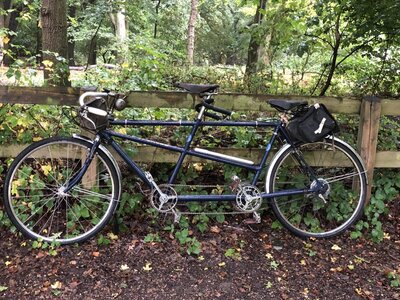 by Brucey
one thing to check is the RH cone adjustment; if the RH cone setting is slightly wrong, one effect of this being wrong is that the axle slot is set further left than normal. This inhibits the sliding clutch from moving over fully in first gear. It can also allow the ring gear to float about more than usual. The net effect of this is that you may not get reliable selection of bottom gear at all, and when you are in bottom gear the high gear pawls may spontaneously re-engage which gives you second gear instead.

To set the RH cone, the LH cone needs to be backed out, then the RH cone tightened finger tight. Make sure that the LH cone is still backed out of the bearing. The RH cone is then undone ~1/2 turn and then locked with the tabbed washer. The hub bearing adjustment is then made using the LH cone.

IME if the RH cone is more than one turn from where it should be, this can cause symptoms as you describe. If it is really bad (and/or the cruciform clutch is worn) it can cause second gear to slip out too.

NB in early AW variants, the sliding clutch and the clutch sleeve are different to later hubs; if changing to later parts (which ought to work fine) they should be replaced as a pair.

by seph
Vince https://colwoodwheelworks.co.uk/ is a mine of information, and spares, for all things Sturmey.
Worth a try

by RobC
Thanks Brucey. By ‘slightly wrong’ do you mean too loose or too tight? Im pretty sure I followed my usual procedure (hub innards out and axle held in vice) of nipping the RH cone up and then slackening off slightly until the lock washer can slide over. Should I have undone it a further half turn?

by Brucey
too loose would do it. Once or twice I've thought that I've adjusted a hub, only to come back later and find it is way slack, presumably because something got hung up inside during the first adjustment; might that perhaps have happened?

If the problem is with the cable and shifter, it ought to be possible (eg for the stoker) to see actual movement of the toggle chain....?

by RJS
If a longer cable is needed, say, if you use a trigger shifter, a cable joiner as sold by the likes of SJSCycles would sort it.
Cheers, Rob.

by RobC
Thanks for the advice. I rebuilt the hub in order to replace the axle, which had a riveted sun gear whose rivet had seen better days. It was very sloppy. The original axle was an intermediate size between the two sizes available new now (the 148mm is too short so I had to get 163mm) but the opening in the middle of the axle looked the same on old and new, however perhaps there is a compatibility issue with old innards and new axle that I hadn’t foresawn?

Will dismantle again and check...

However I think I’d prefer a trigger shifter so will also try that gizmo suggested by RJS. I found something called ‘cable splitter’ presumably for folding bikes or some such.

by Brucey
before you strip the hub, it isn't a bad idea to measure the bare axle length protruding from the RH locknut, and make a note of that exact length (to within 1/4 of a mm). This way you can reset the cone the same way with the hub partially assembled if necessary, in order to check the action of the sliding clutch.

With the internal out and complete, you can check for float in the ring gear; more than half a mm axial float would be too much.

With the internal reassembled complete bar the planet cage, and the RH cone at the correct (same) setting as before, you can check that the cruciform clutch is set correctly in gear 1 (defeating the high gear drive pawls) and gear 2 (fully engaged with the dogs inside the ring gear).

The behaviour of the gear you report says very clearly to me that one or both of the above is not happening.

Mad thought; when you rebuilt the hub you did use the correct pinion pins? The correct sort have a shoulder at the RH end. The current sort (meant for the NIG-AW) don't have a shoulder, and if you try and use those in an older hub it causes the ring gear to be in the wrong position and also gear selection problems similar to those you describe.

by jb
I presume the cable is pulley guided rather than through a sleeve? You could try altering its path to follow the central brace where the pump is, which will reduce cable movement due to flex. But its a problem that would have been apparent from when it was new if that was the case.

by RobC
Update: Brucey was right of course. Somehow I had managed to not tighten the RH cone properly when assembling the hub. As he said, something must have been catching at the time and I didn’t realise, because I can well remember assembling it and going through the standard motions thinking all was fine.

Silly me thinking frame flex could cause such issues!

Anyway all tightened up now and seems to be working ok. Fingers crossed no long term damage caused either.

Once I’d removed the innards whatever had been stuck soon plopped downwards leaving this clear gap as seen in the pic! D’oh.

Thanks for all the advice. 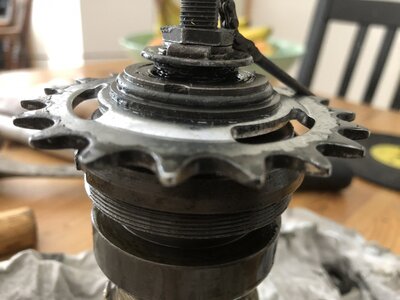 by fausto99
Sorry for the off topic, but I couldn't help noticing your stoker's cranks are "on the wonk". I suspect the cotter pins have been put in the same way round rather than in opposite symmetry.

by ChrisButch
Is that an Evans tandem? The glimpse of the name on the frame looks as if it might be. If so, it would be coeval with the bike on which I had my first cycling experience - initially in a Watsonian sidecar, subsequently as stoker with Kiddiecranks.

fausto99 wrote:Sorry for the off topic, but I couldn't help noticing your stoker's cranks are "on the wonk". I suspect the cotter pins have been put in the same way round rather than in opposite symmetry.

Thank you- you’re right they’re a bit wonky but were much worse. The cotter pins are fitted in opposite symmetry but it’s been a labour of love getting the cranks to sit right. I had the cranks rechromed and as a result of this the holes for the cotter pins lost some of their initial diameter in an uneven way, due to the excess plating etc that gets left behind, if that makes sense. Plenty of filing away with a round file has ensued, but clearly I’ve more to do to get them to sit right. Theyre nice and firm and there’s no play currently but it’s another job on the to do list (along with some more top tube cable clips, a replacement headclip, and replacement handlebars - the current ones are very scratched and I don’t think they’ll last much longer) before I start taking it out for longer runs.

ChrisButch wrote:Is that an Evans tandem? The glimpse of the name on the frame looks as if it might be. If so, it would be coeval with the bike on which I had my first cycling experience - initially in a Watsonian sidecar, subsequently as stoker with Kiddiecranks.

Close: It’s a Grubb, from 1934, which belonged to my grandparents. Sounds like my dad had a similar formative experience to you with both the sidecar and the kiddie cranks. I got the frame redone by Winston Vaz in south east London and he did a good job other than affixing the grubb transfer slightly askew! It’s been a fun project getting it back on the road and I’m grateful for advice from forums such as this.

RobC wrote:….. Somehow I had managed to not tighten the RH cone properly when assembling the hub. ….. something must have been catching at the time and I didn’t realise, because I can well remember assembling it and going through the standard motions thinking all was fine....

glad it worked out OK!

in hubs with the metal clutch spring cap particularly (because it won't so easily pass through the RH hub bearing balls) I think the driver can be disturbed and then sit on top of the clutch for long enough that the RH cone adjustment is not perfect. It moves later of course, so you don't notice, but obviously the hub doesn't work properly. Leastways I think that is what might happen, I've seen it often enough.