I recently purchased my first ever road bike and I need help with pedals!

My road bike has two bolt type shimano pedals but I've researched them and it seems these tend to be more appropriate for off road riding? Should I be switching them out for a three bolt type? Need to buy shoes too so want to make the correct move here!

Thanks so much,
Stefan
Top

Stick with what you've got, at the very least until you have some experience of them. Some years ago there was snobbery amongst "road" riders that anything that looked MTB (e.g SPD pedals) were definitely out. Thankfully that has faded. I use two bolt SPD style fixings everywhere and for every purpose and have done so for many years.
Top

Plenty of people use the 2 bolt system (SPD’s) for road riding. There is an argument that they are much easier to walk in for cafe stops etc because most of the shoes that accept 2 bolt cleats have a recess for the cleat. Also the cleats (the bit that attaches to the bottom of the shoe that engages with the pedal) are metal and more hard wearing than the plastics cleats on road shoes.

If you are doing long distance - over 100 miles, then you might Start to feel the cleat on the bottom of your foot, but plenty of people use them for ultra distance rides up to 600km+.
A cart horse trapped in the body of a man.
http://www.jogler2009.blogspot.com
Top

I agree, your pedals are ideal, if you don't mind learning to use "system" pedals that hold your shoes until you twist your foot to release. You need to practice that a lot so that it becomes your instinctive reaction when you suddenly need to put a foot down.

Lots of us ride road bikes with pedals like yours because the shoes that work with them are mostly easier to walk in than fully "road" shoes. But the appearance of the shoes can be very similar to purely "road" shoes. For example:

These look just like a pure "road" shoe except for the studded sole.
Top

IMHO the crux of this is that if you are actually racing and don't aim to walk anywhere in your bike shoes then possibly a 'three-bolt' shoe/pedal would be the most appropriate thing. Peer pressure from other roadies/magazines etc may push you in this direction.

However for 'everything else' then some kind of two-bolt shoe/pedal is likely to be a better compromise.

There are of course complications;

a) there is less choice in two-bolt road shoes; don't be fooled by shoes which have both three and two-bolt fixings; these are of little real use with two-bolt cleats and pedals unless an adaptor is also used (with 'pontoons'), and AFAICT there isn't a really good adaptor on the market of this type. Breakages and complaints about the adaptors you can get are commonplace.

b) two-bolt pedals don't suit everyone. The cleat centreline is only about 55mm from the crank face and (moreso than with three-bolt cleats) it is important that cleat is beneath the middle of your foot, else an increasing portion of the pedalling load is borne by the shoe against the outboard edge of the pedal, rather than through the cleat, which is not ideal. Many people have feet that are wider than can be accommodated ideally in a two-bolt pedal.

c) Reasonable two bolt shoes are no cheaper than reasonable three bolt shoes. You can get cheap two-bolt 'leisure' shoes but most of them are rubbish for riding the bike, having soles that are not as stiff as is ideal for pedalling (hence complaints of 'hot foot' etc). Often the best choice in two-bolt shoes is to use an MTB racing shoe.

You will hear that (two bolt) 'SPDs' are 'not designed for racing'. Try telling that to a mountain bike racer, or CX rider. Also a little known thing is that when shimano introduced the two-bolt SPD system, as well as MTB stuff, they produced 'road' models too, for example Dura Ace PD-7410 and Ultegra PD-6500 pedals. 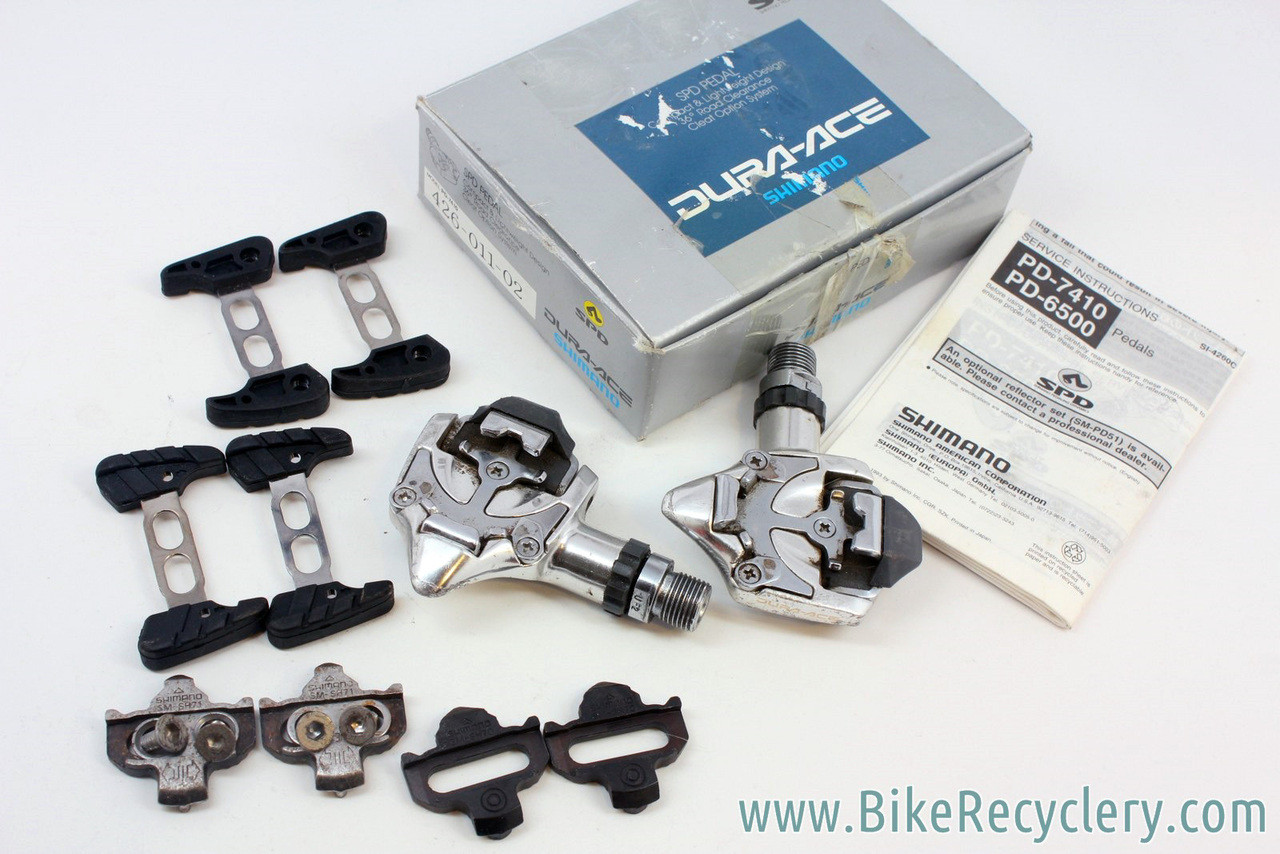 These worked OK but didn't find great favour in the somewhat eclectic pro peloton, so to this day most roadies use three-bolt cleats that make you walk like a duck, wear out quickly and/or are very slippy underfoot.

My advice -if the two bolt pedals you have are reasonable quality- is to adjust the binding tension down, get some two-bolt shoes/cleats and see how you get on. Clipless pedals of any sort are not for everyone, and you need to learn to twist to release, clip in and clip out etc; these skills are largely transferable from one clipless pedal to another, so you can 'learn' on the pedals you have.

I use both systems and have done since they came on the market so thats @ 30 years experience.

Now i stress this is my own experience but i find that 3 bolt hold my feet more rigidly and spread the load from shoe to pedal better. 2 bolt, especially double sided, are great for commuting where you are in and out of the pedals all the time but i find my feet 'float' about quite a bit. So i use 3 bolt most of the time, 2 bolt for touring / winter (when i'm more likely to need to walk/get my feet out and planted).

FWIW, if you walk on the 3 bolt cleat rather than putting the heel on the floor you are less likely to skate about as your weight puts more contact to the ground - not always possible but its there.

I'm currently using some lower end RSP road shoes (@£60 on Amazon) that take 2 or 3 bolt, Boa type closure, lightweight nylon sole, plenty of ventilation and plenty stiff enough for most people. I have had hot foot with them but only after about 120 miles!

i've used them for something like 11000km this year and only just changed the cleats. I don't get any more miles out of 2 bolt steel cleats as i tend to do a lot more walking on them.
Convention? what's that then?
Airnimal Chameleon touring, Orbit Pro hack, Orbit Photon audax, Focus Mares AX tour, Peugeot Carbon sportive, Owen Blower vintage race - all running Tulio's finest!
Top

Ive been on 2 bolt SPD shoes/pedals since 1991 with many bikes, MTB and road. As I started with MTBs then moved onto road bikes I kept the shjoes/pedals as I couldn't justify having shoes for only one bike.
My Youtube library.
Top

You'll be fine. I use both. For longer hard days o the road I prefer my road shoes and pedals but not enough to worry and I can't say if its pedal or shoe I like,. MTB, CX. Commuting, spare road bike and its 2 bolt basic SPDs. I do always go for the racey, stiffer shoe as the softer one don't feel right. Unless I tip them upside down you don't knno that they are not high end road shoes.
I suggest stick with the pedals but buy good shoes. if you don't want heavily treaded ones you cash get some with ore minimal tread . Enough for country walks but not shaped like tractor tyres.
Unless you plan some long walks make riding the priority not waljng.
Top

The 3-bolt SPD-SL pedals are better to ride, but worse for clipping in or walking. The more recent carbon pedals are easier to clip into than the aluminium-bodied ones. Only Dura-Ace have noticeably different bearings, and those are actually less well-sealed than the cheap ones, the inboard bearing being very close to the dirt seal.

Most of the (small) disadvantages of the "mountain bike" SPD are negated by a good pair of shoes that is stiff around the cleat area.
Top
Post Reply
10 posts • Page 1 of 1