by Brucey
back in the 1930s one of the first derailleurs to meet with racing success in the UK was a Cyclo model used by Hubert 'Oppy' Opperman to break the end to end record. Accordingly when they introduced a new model derailleur a few years later in 1938, they actually called it the Cyclo 'Oppy'. It was in production until 1949, apparently.

It is pretty much a lightened/shortened revised version of the Cyclo Standard, with a canted bracket (for smoother cable runs), a different tension spring arrangement, and used a twin cable for positive shifting (when the cables were correctly adjusted) much like Rohloff uses twin cables today. 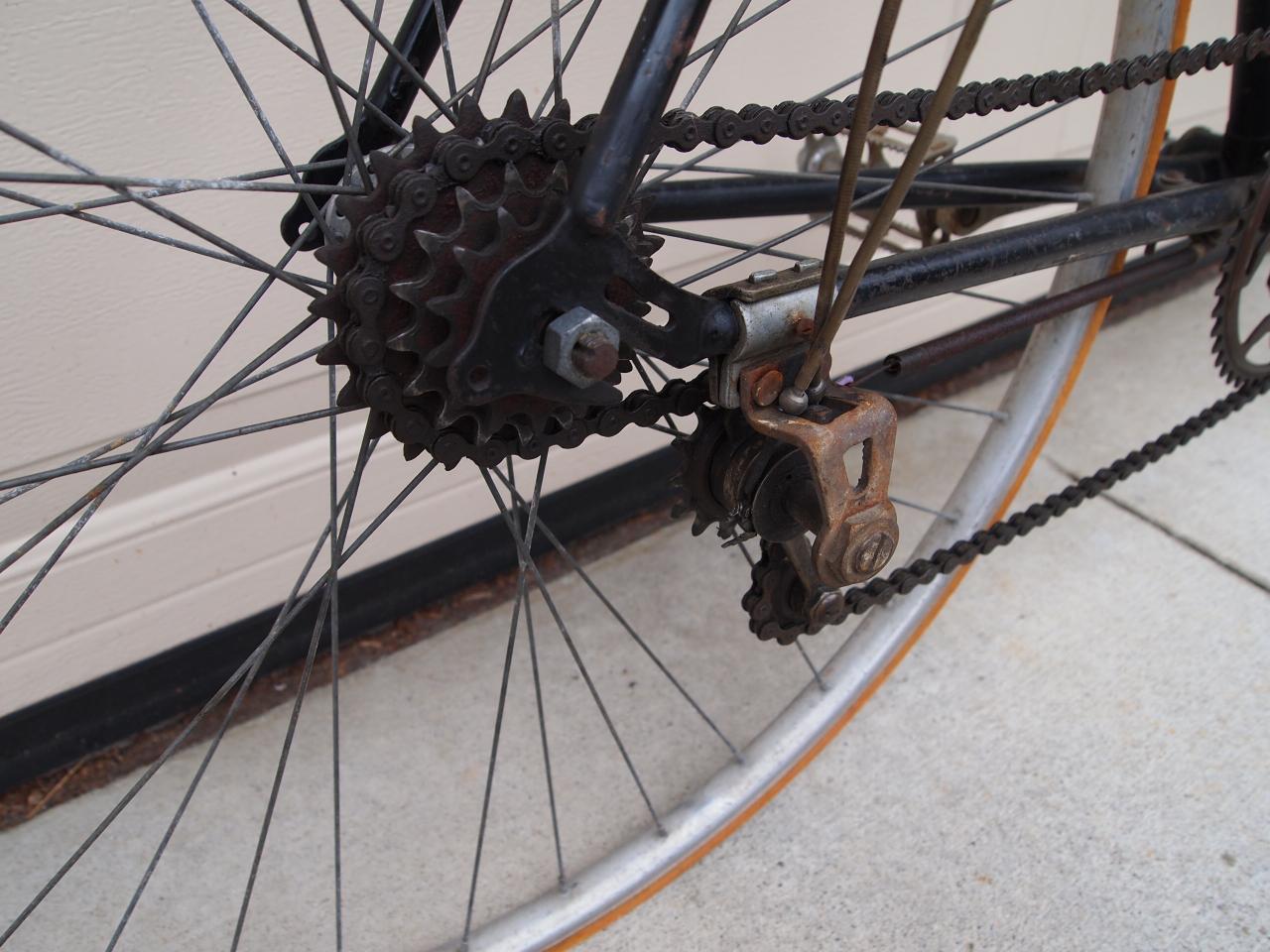 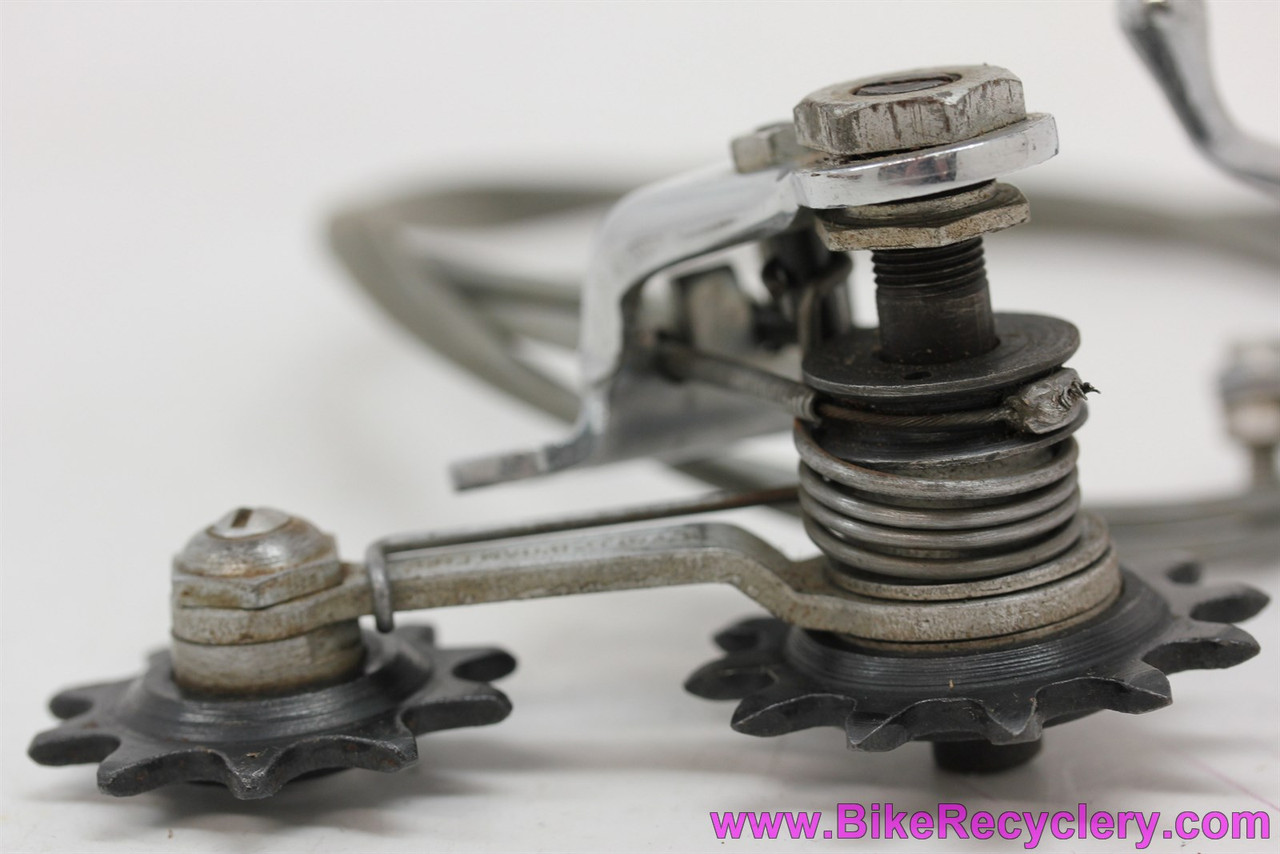 The cable stops mount in a 'U' shaped slot because the cable is manufactured in a complete loop so needs to be pushed through a slot to be mounted. Soldered nipples on the cable are used to gain traction on both the lever and the mech pulley. 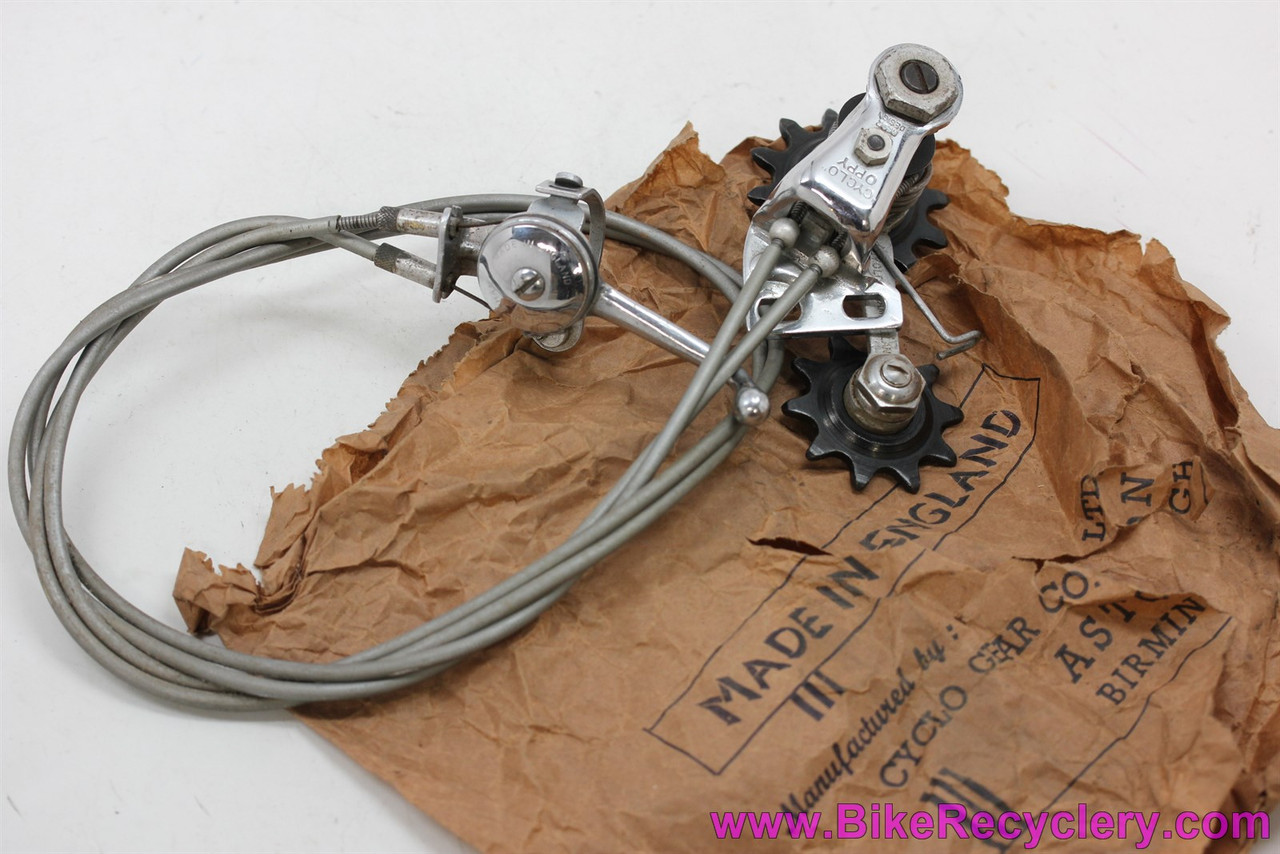 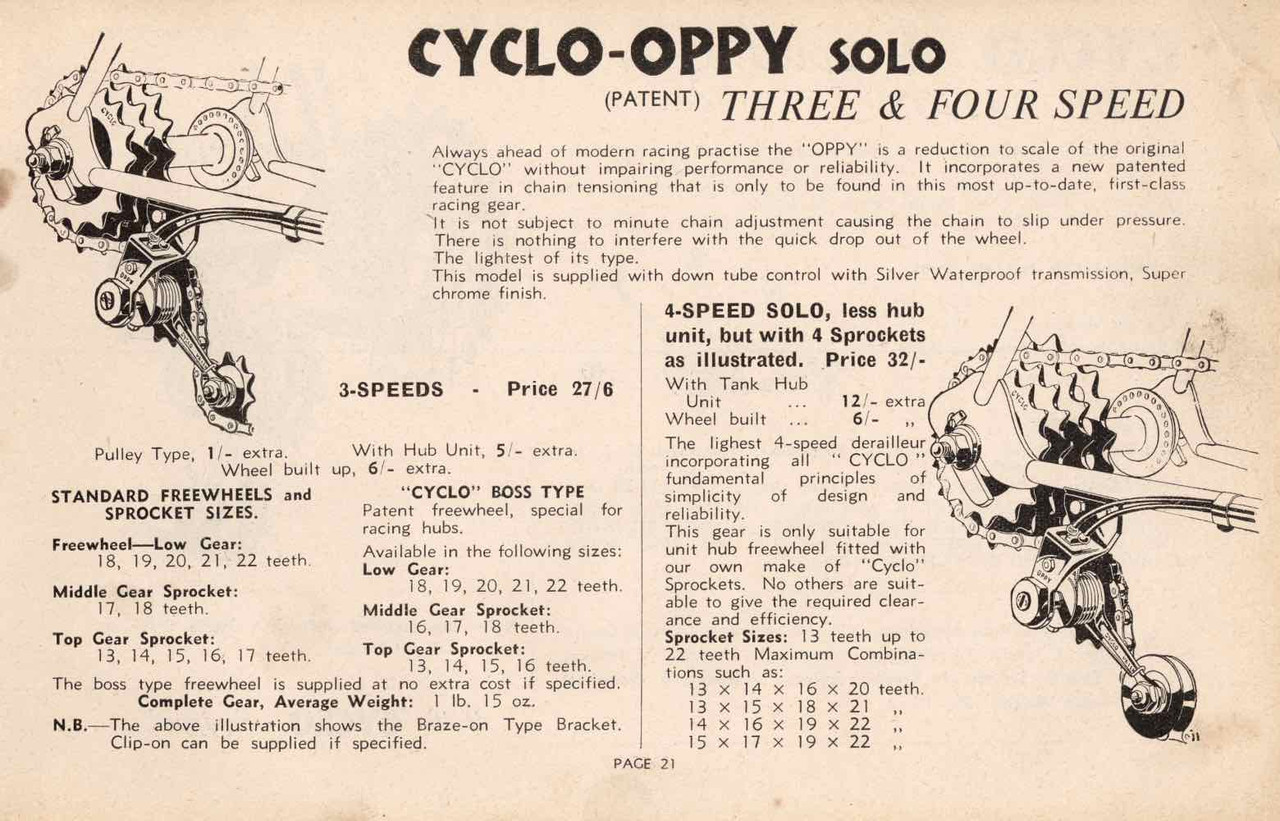 I note with interest that it is recommended that 'the Cyclo unit hub and sprockets' should be used with the 4s gear because 'no other gives the correct clearance and efficiency'. So now you know where shimano gets their ideas from...

. Not sure if Cyclo copied the Bayliss-Wiley unit hub...? I wonder which came first?

Initially launched as a racing derailleur, by 1949 the whole arrangement was presumably looking a bit old hat, with lighter aluminium models and dropout mounted derailleurs becoming available from other manufacturers.

I recently obtained the remains of an 'Oppy'; unfortunately the 12T guide pulley (part O.10 above) is missing; I have the bearing centres but not the pulley itself. I don't even know if it is a 3s or 4s model, it is a bit reluctant to move at all... Easy repair of course, all I need is 3/6 and a time machine....

by ANTONISH
My Father had a bike equipped with a gear that resembles that.
He repainted it in 1953 and passed it to me. The twin cable gear lever was mounted on the top tube.
I remember the "Cyclo" make but I don't know if the "Oppy" name was on there.
I was always under the impression that it was a 1930's manufacture.

by Brucey
any pictures? The Cyclo 'standard' model looks very similar (there is a picture of one fitted to a bike in my first post) but it doesn't have an angled bracket and it has a spring running under the RH chainstay which provides the chain tension. The 'standard' model was the one Oppy actually used in the mid thirties. Such derailleurs were manufactured in Birmingham (by the UK 'Cyclo Gear Company') from 1932 but were based on a French Cyclo design from as far back as 1923. The 'standard' model uses a 14T guide pulley rather than the 12T of the 'Oppy'.

This type of derailleur lays claim to being the first practical mass-market derailleur; the basic idea can't have been that bad. else it wouldn't have stayed in production for as long as it did.

by ANTONISH
No pictures.
Three sprockets - and it changed quite well - I suppose the push pull of the cable setup had some advantages.
My Father explained that because it was a derailleur I couldn't pedal backwards and if I moved the bike backwards I had to lift the rear wheel - I still instinctively do that today - it always jars a bit when I see people wheeling a bike backwards without lifting the rear wheel.

by jimlews
The Cyclo Standard was the derailleur of choice for serious cycle tourists and tandemists in that (when set up properly) it provided reliable gear changes; a rare attribute in the inter-war world.

Frank Berto, definitely one of the cog-nocenti, was so impressed that he designed a modern equivalent/tribute:

by willcee
hi Interesting contris, namely because I have this en route which seems to have a later version.. be interested to hear what you chaps think of it...will

by Brucey
can't see exactly what you have there Will; it looks like a single cable mech which means it could be a SImplex or one from a number of other manufacturers including Cyclo. Simply because mechs of this type (which either had a rotary sleeve action like the Cyclo Standard and Oppy models, or an even more basic plunger action) were simple and were being made using tooling that had already been paid for (many times over) they continued to appear on (mostly French) bicycles all through the 1950s and even into the 1960s. If three or four speeds was enough, then so was a derailleur of this type too, presumably.

A lot of older French component designs have continued to be made in former French overseas territories, eg Thailand. So for example I have seen 3 speed freewheels which have been recently made there, complete with 'Simplex' branding. They may have continued to make older derailleur designs too for all I know.

by willcee
Brucey et al, At this time its still in the capital, with a nephew, who, while a decent cyclist is no spannerman , and is having diffs getting one pedal off to hoik it into a cycle carton.. I have some detailed pics and will hunt them out, he picked it up for me in Stanstead in late August, took a holiday in Croatia with his lady and was positive when they returned, tested, self isolated, had this lurgy for 3 days according to my sis , a retired IC Sister, is back on form , sourced a box. bought some tools and hopefully has it en route as I write as I'm a tad impatient to be getting started on the resto..WILL

jimlews wrote:The Cyclo Standard was the derailleur of choice for serious cycle tourists and tandemists in that (when set up properly) it provided reliable gear changes; a rare attribute in the inter-war world.

Frank Berto, definitely one of the cog-nocenti, was so impressed that he designed a modern equivalent/tribute:

The LMDS uses twin cables and Berto allegedly built his prototype using a spring from an 'Oppy' but after that the resemblance dwindles somewhat.
It is surprising that so much metal weighs as little as is claimed (180g) but anything that sticks out and is liable to get covered in mud/bashed needs to be simpler than that; arguably 'almost disposable' isn't a bad idea.

It seems there are at least three ways the cables are done in the LMDS; seemingly there is a conflict between sticky-out-ness of cables and complexity of cable routing. I have found a few photos (of that rare thing, these mechs installed on bikes and working rather than new, in a box....) 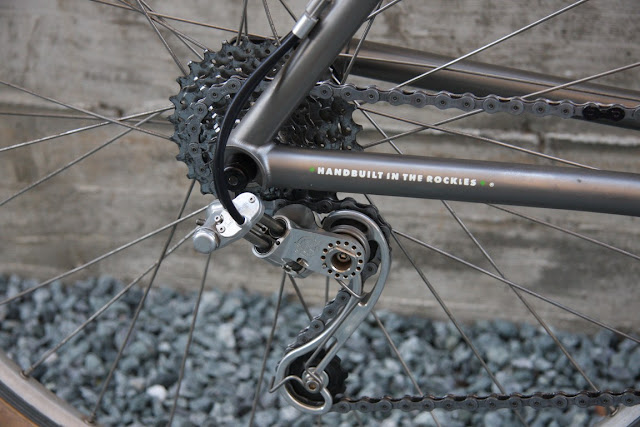 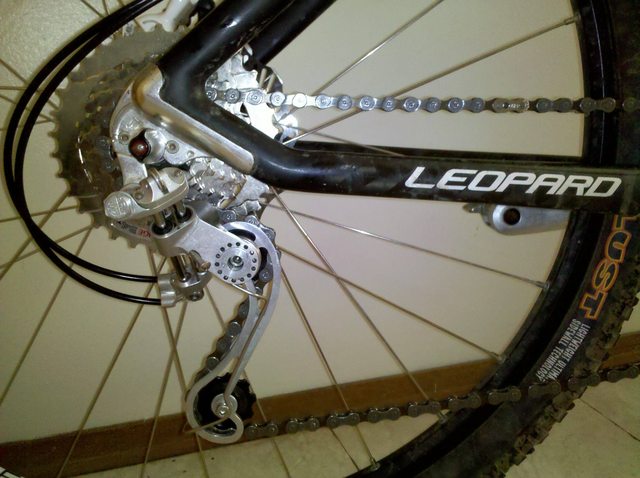 by slowster
On the subject of desmodromic derailleurs, I see that Hidetaka Hirose has died.

I suspect the derailleurs he made will still be in use decades from now.

Brucey wrote:
The cable routing on the 1930s Cyclo design is better....?

Any wear of the lower "knuckle" of the FB design likely to cause same to twist on the twin rods and jamb?
Ideally positioned to ingest dirt and moisture.

slowster wrote:On the subject of desmodromic derailleurs, I see that Hidetaka Hirose has died.

I hope they still need bicycles where he has gone.

by Brucey
Despite Campagnolo's claim otherwise, the original Nivex was probably the first parallelogram derailleur; patented in 1937 and available for sale in 1938.

The modern 'Homage' under test (from Scott's link above) is a pretty close facsimile but is made in aluminium alloy rather than steel, and has a slant parallelogram rather than one that articulates in the horizontal plane. However the thing that made the original a practical item -which allowed wheel changes/puncture repairs 'sans toucher a la chaine'- was the clever rear hub, and the 'pointe mort' position ( which used the 'repos de chaine' which was a parking spot above top gear for the chain later copied by campagnolo as the 'portacatena'). The QD axle was arguably not as refined as that offered by others (where in some cases the sprockets stayed put when the wheel was out).

So it remains to be seen if the original utility of the design will be retained or not; modern wheels/hubs won't come out as easily as that. Maybe some clever modern interpretation (using a through-axle perhaps) will yet emerge...?

Interestingly the original Nivex was fitted with pulleys having many small teeth, claimed to be quieter-running. No accident then, that Campagnolo's gran sport mech used nigh-on identical pulleys.

Another interesting feature of the Nivex is that the tension spring has a linkage on it; this linkage allows the spring to be placed off-centre, (and provide a fixed stop for the cage) whilst applying a near-tangential force to the cage throughout the stroke of the derailleur. This arrangement also seems to provide a forwards hard stop to the cage; this may limit the overall capacity of the mech. However it may also provide some defence against chainsuck.

If I am critical of the modern homage being pursued by Heine/Herse, it is that they have retained several features that are potential weaknesses. For example;

a) the mounting onto the chainstay. This is via a single small bolt/bracket. I would imagine if the mech takes a knock, this will be where something will first break. It would be easy enough to have designed the mech with a small 'mechanical fuse' piece which can be easily replaced.
b) If made in ductile steel (for example) this 'fuse' piece would also allow the mech to be aligned precisely, which is a facility that otherwise appears to be lacking (unless they intend you to bend the main support plate in the mech somehow, without damaging the parallelogram)
c) the original Nivex used pressed steel plates in the parallelogram; these would be 'tweakable' whereas CNC aluminium pieces, rather less so.
d) the original parallelogram design has rather narrow pivots. This feature is retained in the homage. It means that the pivots will have to be very well engineered to last well without wearing; these pivots are under load from both sets of springs and the whole weight of the moving parts of the mech (and the chain) is supported via these pivots. Every RD I have ever owned with narrow-spaced pivots has worn prematurely at this point.
e) the intention is to offer only a braze-on mount. Better than the flimsy-looking single-bolt clamp-on mounts offered by Nivex BITD for sure. However the two-bolt mech mount offered by cyclo was much more convincing and offered a reasonable clamp-on mounting alternative.
f) the main pivot, tension spring mounting and linkage again appear as if they will be subject to rapid wear unless they are precisely engineered. A more modern design would almost certainly use a longer main pivot bushing and (probably) replaceable polymer bearings in the spring linkage.

The plus points of the Nivex design (and the Homage) are that the guide pulley path can be made to follow the profile of the sprocket cluster, thus retaining a small GPG (guide pulley gap) and therefore consistent shifting. In point of fact the path described is always a curve which best suits a set of sprockets which have a geometric series of tooth counts; this style of cassette is not always used in modern designs, in part because it presents inferior shifting vs a more linear progression of sprocket sizes when a mech with a more linear path is used. However I don't doubt that the shifting will be pretty good, but that much of this will be due to modern chain and sprocket designs.

All very interesting. I just hope that the Homage doesn't stay faithful to the design of the original Nivex at the expense of functionality or durability.

which includes this photo 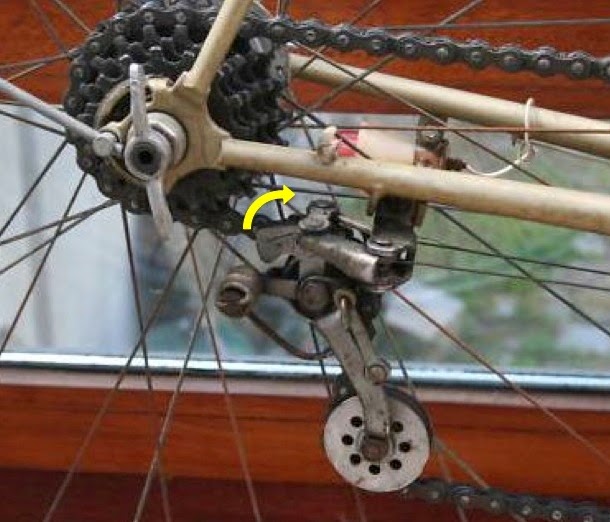 indicating the curved guide pulley path. Interestingly the cage is so far forwards in the photo that the clever spring lever has run out of travel; any further movement forwards must be accommodated by simply flexing the curved external section of the spring, which probably gives it a very hard time indeed.