For discussions about bikes and equipment.
Post Reply
25 posts

I got my bike out of the shed yesterday to give it a once over after 2 weeks of not riding. I'd given it a clean before I put it away, but hadn't paid proper attention to the wheel QRF's. When I tried to undo them to take the wheels off they were stiffer than normal, and when I did manage to shift them they were ware covered in the tell tail sign of aluminium corrosion.

They've now had a thorough clean and inspection and they seem to be sound. I've given them a good squirt of protection spray (Muc-off MO94) and I'll be keeping a closer eye on them from now on.

Are they external cam quick releases ? Internal cam ones seem to give no trouble, I've been surprised how seized the external cam ones can get when I've encountered them on other people's bikes.
Link here explains the differences in case you are unaware of them.
https://www.sheldonbrown.com/skewers.html#choices

I think lots of us on here face a never ending battle to keep a derailleur bike running well thru winter.
Round here with tractors etc after a ride despite mudguards, mudflap etc a rather coarse grinding paste gets into everything.
I've tried all sorts and for me old engine oil on the chain after most rides and intermittent CV boot grease on the chain works best.
You have to accept lots of work unless you fit IGH, enclosed chain, drum brakes etc.
I'm sure others will offer similar and even vastly different methods but do what works best for you and be diligent about doing it.
Top

I used to spray, or wipe on with a cloth, the shiny alloy bits on the chainset, cranks, wheel hubs etc with a bit of WD40 (careful of bearings and braking surfaces) for a little extra protection. It would seep into the spoke holes on the hub to give a bit of protection. Carefully on the rims of course!. Also on bolts for the mudguard, rack etc including the brakets on the muguard as well as the fork ends/dropouts. Then kept an eye on them as the weeks went on. Accumulated some muck of course, but them carefully cleaned the stuff off for the spring.Keep mech pivots well lubricated as well as the chain.
Brompton, Condor Heritage, creaky joints and thinning white (formerly grey) hair
""You know you're getting old when it's easier to ride a bike than to get on and off it" - quote from observant jogger !
Top

ChrisP100 wrote:Hopefully that should see me through, but if anyone has any other good tips they are more than welcome.

I use a multi-purpose spray (Brunox: both lubrication and rust protection) on pivots on the front and rear dérailleurs, and the V-brake pivots as part of my winter preparation to avoid the parts seizing up.

My chain is with full nickel finish on all links to avoid sudden "rust attacks" developing overnight.

Various bolt heads on the stem or frame, tend to rust over winter because they retain water. Apparently one can apply Vaseline in the hex openings to avoid water being trapped inside, but I use the more lazy approach and give them a spray of Brunox which also works OK.

For cable lubrication I use Shimano silicone grease. This is what eg. Shimano and Jagwire and the automotive industry uses for cable lubrication. It doesn't attract dirt, or accumulate or clog up, works well at extreme low temperatures, doesn't attack the cable housing and provides adequate lubrication among its many merits. Be warned however that using silicone grease for cables is seen a some kind of heresy by many that swears by using grease and oil, despite the well documented drawbacks by either.

I use Finish Line Ceramic wet lube, by far the best chain lubrication I have ever used, especially for winter riding. It seems to give a really good long lasting rust protection surface that doesn't cake up with crud.

As I understand it (my experience too), accumulated road salt first becomes a major corrosion problem in conjunction with water. So if the bike is kept outside at sub zero temperature so the accumulated ice doesn't melt, corrosion will be rather slow.
On the other hand, if the bike is taken indoors it is probably a good idea to wipe of excess ice/water on the drive train. Freeze-thaw cycles seems to really accelerate corrosion and rust.

Personally I never clean my commuter bike after a ride, but have scheduled a monthly check-up were I clean and oil the chain, inspect and clean the rims and rim-brakes, and wipe of dirt with a dry cloth, perhaps finishing off with Brunox spray and a wipe; it dissolves hard crud, displaces water, and gives a temporary rust protection. My bike is stored outside or in a unheated shelter.
I never use water on my bike in the winter; it accelerates corrosion and takes ages to dry and tend to run into bearings where it does no good.

For my riding, the above regime gives very acceptable wear and corrosion results for winter riding.
--
Regards
Top

IME muck sticks to silicone grease comparably well to the way muck sticks to other, er, sticky lubricants. Also Silicone greases don't, as a rule contain any chemical anti-corrosion additives; they confer corrosion protection (such as it is) simply by being a barrier, and may be little better than (say) Vaseline in this respect. Silicone greases shouldn't dry out in the same way as other greases do, but this varies with the make-up of the grease. So AIUI shimano use Si grease with 'sealed ferrules' (which are always slightly more draggy than unsealed types) but with other ferrule types it is less clear that using Si grease is a good idea.

I guess if you use Si grease then you should have a sealed ferrule on both ends of every piece of cable housing, which means up to six sealed ferrules on some cables; IME such a cable run is quite likely to be too draggy (when new) to work well. If you use one sealed ferrule per housing section, this means less drag, and will usually keep most of the crud out of the cable, but won't retain the lubricant as well. In many cases (especially if the cable runs are in slotted cable stops), it is probably the best compromised to accept the fact that the cable housing sections will have to be unhooked, de-loused and re-lubed from time to time.

Some other lubricants chemically attack and soften some cable liners, but even without this the liner wears anyway, and SI grease isn't especially good at preventing such wear, but will presumably be better than nothing.

BTW you might think that full housing runs are the answer. Well IME water gets into them at the ends and if the cable is routed via the BB on a bike with ~27" wheels, there is enough of a low spot in the cable run to cause water to pool in that part of the cable and the conditions can soon become corrosive enough to destroy the kind of stainless steel that is used in inner cables.

So I don't think there is a one-size-fits-all 'best solution' here, more that there are schemes which may suit some bikes and some users more than others....?

Brucey wrote: Also Silicone greases don't, as a rule contain any chemical anti-corrosion additives; they confer corrosion protection (such as it is) simply by being a barrier

Sure, but silicone grease are generally considered very hydrophobic and very good at maintaining such barriers, hence its use as a water repellent barrier in various seals like underwater torch lights, plumbing etc. Together with stainless cables the Shimano silicone grease seems very good at keeping rust and corrosion at bay.

Silicone grease also seems to be very ice phobic and doesn't become sluggish when cold. While being purely anecdotal, I haven't had stuck or sluggish braking or shifting action after freeze-thaw-freeze cycles like I occasionally had before using silicone grease. I guess the silicone grease acts like a release mold against the ice.

Brucey wrote:So AIUI shimano use Si grease with 'sealed ferrules' (which are always slightly more draggy than unsealed types) but with other ferrule types it is less clear that using Si grease is a good idea.

Both Shimano SIS-SP41 and the newer OT-SP41 and OT-RS900 cable housing comes with pre-applied silicone grease. The hard to get SIS-SP40 cable housing doesn't, but that seems to be caused by price and product differentiation, not anything technical.
Jagwire does the same; the only difference between Jagwire "LEX" and "LEX-SL" cable housing is the pre-applied silicone grease. One vendor has a 30% mark up difference between these two products for 50 meter factory rolls. Sure, silicone grease doesn't work so well with metal wire sliding directly against metal, but neither does oil or regular grease in that scenario.

The list of benefits of silicone grease is long: it repels water, ice, road salt, dirt, it lubricates and works over a wide temperature range without stiffening up, doesn't form an abrasive mix like oil and dirt does, doesn't oxidise or dry out or decompose (at realistic temperatures), is non-toxic, doesn't attack cable housing or seals and make them swell up*, doesn't easily wash away, it protects against rust and corrosion etc., and that is without any special additives like PFTE.

*In theory a vendor may make ferrule seals that aren't silicone grease safe, but it would be pretty insane to do considering the dominance of silicone grease, and I have never seen or heard of such products on the actual market.

The only real downsides to silicone grease as cable lubricant seems to be cost, and that it is hard to get silicone grease with good data sheets that aren't in industrial sized barrels.
--
Regards
Top

cycle tramp wrote:+1 for long front mud flap and drum brakes (I still use deraileur gears after several attempts at finding a hub gear I liked)

So are you using drum brakes with derailleur gears?

Apologies for the delay in my reply - Well, a bit like that. I've got the rear hub with the freewheel thread on it, so I can use freewheels. 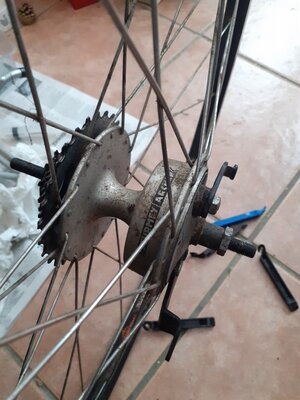 Neither intention or nelegect - just simply lots of miles without needing any maintenance - I've only taken the rear wheel off the bike for a tyre change. 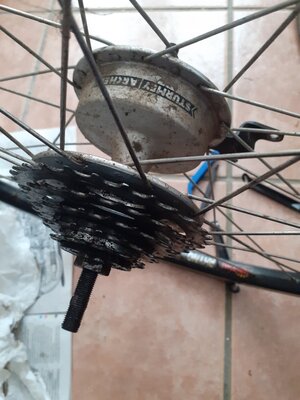 cycle tramp wrote:+1 for long front mud flap and drum brakes (I still use deraileur gears after several attempts at finding a hub gear I liked)

So are you using drum brakes with derailleur gears?

Apologies for the delay in my reply - Well, a bit like that. I've got the rear hub with the freewheel thread on it, so I can use freewheels.

Neither intention or nelegect - just simply lots of miles without needing any maintenance - I've only taken the rear wheel off the bike for a tyre change.

Thanks. And is there a front derailleur?
Top

Got slotted cable guides and intermittent cable outer? Unship the cables frequently and lube with your favourite stuff. I'm not getting involved in that argument.

Household polish or some cheapy silicone spray keeps the frame etc a touch slippery keeping crud off.
I use boiling grease for the chain and every weekend wipe the chain with a petrolly rag to get what is pumped out off.
Generally , keep the bike oily enough to stop corrosion but not so oily that it attracts muck that might wear.
Top

mikeymo wrote:
Thanks. And is there a front derailleur?