mikeymo wrote:Oh, I get your drift all right. You don't like rich people spending large amounts of money (that they don't deserve) on things, so you describe them as "status symbols".

I said the exact opposite of that - that I don't have any problem with people spending their money on such things.

As to status symbols - you're seriously saying there's no such thing? Seriously??

Nothing at all "odd" or "bizarre". Though I acknowledge your "faux naive" use of language in an attempt to deflect your real attitude being pointed out to you.

What I'm saying is exactly this - that you are not being honest. Maybe not even with yourself. That your actual feelings about wealthy people and how they spend their money are not what you are pretending they are.

roubaixtuesday wrote:If someone is buying it purely as a status symbol, why worry, it's far less damaging than other status symbols like fast cars/mansions/ first class fights etc.

The three things that you presented as examples of "status symbols" are all very strange. I find it difficult to believe this, but maybe you've never actually met any wealthy people, or driven or ridden in a "luxury" car or visited a large well appointed house. Or sat in the cramped "coach" seats of an airliner. But if you really haven't, then be assured that spending more money usually brings greater physical comfort and pleasure.

If I were very wealthy I would have a large, comfortable car. It would probably cost a lot of money, it would probably be "fast" as you put it, but only if I drove it fast. I would have a large house, with a swimming pool, several bathrooms, grounds to keep animals, etc. etc. A "mansion" as you put it. And if I ever flew I would fly first class. These are rational decisions that people with money make, because they choose to spend money on things that make them happy, strangely enough.

Your real attitude to the wealthy is revealed in choosing these things as examples of status symbols, rather than the rational choices they actually are. As I said, it looks to me like an attempt by you to present wealthy people who make these decisions as vain or childish or stupid.

What is bizarre is that you didn't choose any of those things which potentially could be described as "status symbols" - personalised number plates, maybe, or jewellery, neither of which have any "utility". Though people have all sorts of reasons for buying anything.

Yes, some people may sometimes buy things as "status symbols". Far far less often than you believe. Wealthy people buy things for comfort, ease, utility, pleasure, security. Just like the rest of us.

I think simply reading my original post again will help you. Oh, and not making assumptions about my experiences or opinions. If in doubt, just ask.

by Oldjohnw
Clearly I am not very clever. If I saw someone with this bike its greatness would be entirely lost on me. Most people, I imagine, would be singularly unimpressed and quite underwhelmed. They would, I suspect, see a frame held apart by two wheels.

by pwa
I expect that the only people who realise a bike costs that much, and who admire such a bike, are the same people who form the market for such things. Those of us who do not appreciate the "specialness" of these things will never reach into our wallets to buy one, and won't give one a second glance if we see it and (very unlikely) recognise it as a £13k machine. We are almost certainly going to assume it is a £3k machine, unless someone tells us different. I don't really look at carbon bikes anyway. It isn't antipathy, it is just lack of interest.

by pliptrot
The marketing blurb from the manufacturer will probably qualify for a chutzpah award. Round tubes are - I have learnt today- a good idea. Materials are not so important. If they were trying to sell to experienced cyclists who could spell their own name without making an error, it would fail. So there you go....

by Jamesh
Makes something like this seem a inevitable bargain.

by cycle tramp
I wonder if part of the issue is 'motor vehicle value' mindset,.
Ten years ago I bought a brand new car! It was a matiz. Due to the government's scrappage scheme I bought it for 5 grand. I still have it, although it's been parked up for so long I'll have to chop down a buddelia bush to ground level to free it..... anyway it's got 800 cc of engine power and goes and stops and everything. I would suspect that a vehicle costing 5 times as much to do everything better and to feel more luxurious at the same time...

... when it comes to bikes, there's the expectation of the same...

..but in that expectation we forget several things;
How fast or how many miles we ride any bike depends upon our fittness.
How well the bike handles will depend on our bike handling skills
There is only so much power we can give the braking system before it becomes uncontrollable
The laws of physics and aerodynamics apply to all cyclists..

..perhaps every bike advert should come with a warning;
'Purchase of this cycle MAY NOT increase your mileage or average speed'

by cycle tramp
A sort of disclaimer, politics wise I'm a pragmatist. Whilst it would be nice to think that only good ideas comes from one side of the house of commons and only stupid ideas come from the other I think it would be incredibly dangerous to do so..
.. I'm not against anyone having nice things or good experiences. I am concerned that people who may not have working experience of bicycles may part with more money than they need too. I'm also aware that in the cycling industry there are firms, bike builders and manufacturers which are attempting to make cycling more accessible, and to overcome so of the engineering weak spots of cycles but that they and their products are not being recognised smply because of the narrow mindedness and conservative nature of the cycling press and the UCI. Which means that there's some great ideas out there which may be lost and cycling could be poorer for it.
Personally if some gave me 13k to spend on cycling, I'd make a few changes to the bike I've got and blow the rest of cycling holidays... new experiences, new roads and new scenery

The utility cyclist wrote:So you don't have any experience of high end bikes so go with the stupid comments, how very typical of some forummers. Things they don't understand or have zero experience of and go in just to make troll comments to antagonise and insult.

Sometimes someone asks you a question on this forum which makes you stop and think. Sometimes the answers may take days or weeks - they're right in the back of you mind you need to put the words around them. Firstly I'll like to say how much I enjoy the utility cyclist's posts and while I'll never use carbon fibre his posts have at least convinced me it's not the work of the devil and won't explode if you look at it the wrong way.
...in regards to this post, he's asked the right question, but rather than use the word 'experience' I'd use 'appreciation'. Do I have enough appreciation of high end bikes? 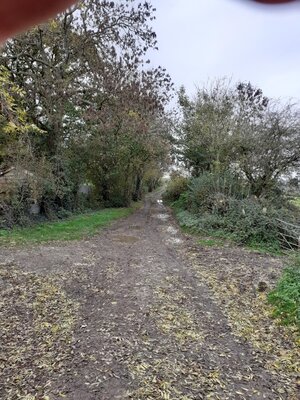 It's the lane I take on my way back from shopping with my bike. Would you ride a bike costing 13k down that track (the puddle at the end is almost pedal deep at the bottom of your down stroke)? You'd have to be very sure of things if you did.
Do I ride it back from shopping with 4 sets of panniers full of food?
Of course...*
..but then the utility cyclist is right.. i have no appreciation for this 13k bicycle. It probably won't do what I ask of my bicycles to do, and if I try and make it, it possibly won't work every well- likewise its impossible make my bicycle to travel at speeds above 16 mph, unless it's down a hill or with a following wind.
It is the unique appreciation that we have which gives the item it's worth. If the 13k bike is truly appreciated then perhaps that is what it's worth is to any potential owner.

(*although not when I've bought crackers, biscuits or soft fruit

by Bmblbzzz
I'm sure someone will now come up with a £13k gravel bike or tourer which is just made for that road!

by thelawnet
FWIW they now have a mere £5,500 model, which is 700g for the frame, depending on paint, and 7.14kg with aluminium wheels + Ultegra Di2. This was the idea all along; establish a ludicrous new price point which is not justified by 'wind tunnel testing' or the usual stuff you get on bikes trying to look like something out of an indoor velodrome.

There will surely be a £3,500 version along in a few weeks, equipped with 105 hydraulic, and it will possibly look cheap to those who saw the hype for the £13k version.....

thelawnet wrote:There will surely be a £3,500 version along in a few weeks, equipped with 105 hydraulic, and it will possibly look cheap to those who saw the hype for the £13k version.....

I think you're beginning to join the dots.

Well done for spotting that and for doing Specialized's job for them.
You do realise that's the point of these products don't you? Specialized will not be particularly interested in selling many of them, it's quite likely they'll lose money on the exercise. The name of the game is association, they will be expecting to sell more £2-3k bikes on the back of it.