For discussions about bikes and equipment.
Post Reply
7 posts • Page 1 of 1

Noticed this on freecycle nearby and went for it. 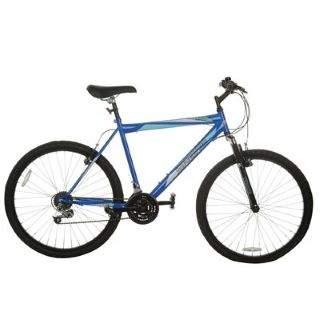 Just planning to make a beater bike out of it.

Problems it currently has;

Alternatively I've thought about making it single speed or even fixed as I have both a single speed freewheel and locking fixed cog that would fit to the original freewheel hub rear wheel.

The bike currently weighs about 16kg but 3kg of that appears to be the heavy steel suspension fork. I think with a rigid fork it will be down to about 13.5kg possibly sub 13kg with a single speed freewheel or fixed gear.

Remember aim is a beater bike that I can ride anywhere and not have to worry too much about theft or damage etc, left outside shops. The weight of the bike is not an issue at all for me. This is a bike that will get scratched up and abused and treated like garbage pretty much. The scruffier the less likely people will mess with it.

The frame appears to be 20" so quite a large frame for a generic bike.

I'd like to go fixed due to simplicity and reliability but wondered if single speed would be better so I could coast or go beyond that with 7 gears to give more practicality but less reliability, i.e. taking heavy shopping home. Assuming you wanted a beater bike and weight didn't bother you which would you go for? I would likely gear it quite low as a fixed or single gear bike so would lose a lot of high gearing which maybe would suit the casual nature of the bike.
Top

Gearing, who can say. I have no idea of the kind of gradients your limited riding will involve. As for general advice, if you are going to leave it out in all weathers I would recommend a total strip down and grease all moving parts including the seat tube and stem portions inside the frame. Cheap bikes are cheaply protected with poor paint and little or no application of lube at the factory.
Current status report:
Back on two wheels in deepest Pastyland and loving every minute. Mission: to enjoy big, bad hills again.
Top

peetee wrote:Gearing, who can say. I have no idea of the kind of gradients your limited riding will involve. As for general advice, if you are going to leave it out in all weathers I would recommend a total strip down and grease all moving parts including the seat tube and stem portions inside the frame. Cheap bikes are cheaply protected with poor paint and little or no application of lube at the factory.

Yes the riding will be limited in range I guess although not necessarily so. If you ever ride a bike like this you will realise they work better on long trips perversely. Once they get going they have quite a bit of momentum ideal for long roads without junctions and they are very stable on long exposed roads but in stop and start traffic getting them moving again is always more effort having to get the bike up to speed again because of the extra 2-3kg over other bikes. The frames at least are super strong and last a very long time but the rest of the components attached to them not so much.

I'm in Yeovil and generally the hills aren't too bad except there is a steep long hill leaving Yeovil when riding to nearby Sherborne. Past beater bikes were used more frequently than my better bikes, commuting mainly, shop trips etc.

I will be changing the loose cup and cone type bottom bracket with a old sealed bottom bracket I have and other bearings will be changed from basic caged bearings to loose bearings. I tend to use copper grease where possible to stop galvanic corrosion and keep the bike quiet but not much steel touching aluminium on this bike and marine grease elsewhere (not much in the way of water proof seals on this bike, wheel hubs etc).

I may go single speed, this means I can use the original rear wheel to lower the investment in the bike and make riding it more of a workout without being the excessive workout of a fixed gear bike. It's nice to coast.
Top

any bike is better than no bike of course, but honestly.... I'd probably choose to tip my time and effort into something else. I've got an old cheap Raleigh MTB frameset (no stupid bouncy fork) hung up in the garage, just waiting for this type of project. It'll still be a bit of a BSO but it'll be built up using parts that have a fighting chance of working for more than five minutes.

A lot of how the bike is to ride is in the tyres; a pretty crummy bike can be made tolerable with the right tyres fitted.

I'm glad the fork's going. I would be tempted to just fit a singlespeed freewheel on the existing wheel, and use the derailleur as a chain tensioner.

Otherwise maybe set it up as 1x7 using the current chainset, but use the front mech as a chain guide? I tried to use a triple on a bike without a front mech once as I couldn't find a mech when I was building up a "bitsa" bike, but the front would self shift occasionally, which was disconcerting.
Top

what fork is on there?
Top

Some horrible and heavy spongy thing that could never be used off-road. It's your very low end generic chinese front suspension fork as fitted to sports direct, argos, apollo at Halfords and lots of other low end brands. It's there as a marketing tool but massively inferior to a rigid steel fork that you get on many alternative similar models. I have a rigid fork to replace it. I don't think they do this fork design now. The bike I think was sold in 2013 but more recent models use a different lighter fork. I've seen the same fork on many older cheap dual suspension bikes. I live on a small hill and there is a bloke I occasionally see coming home from work see-sawing up the road on a cheap dual suspension bike that has the same forks I think. I have plenty of time to view the bike as he is not fast going up the hill but seems very fast going in the opposite direction. They have about 20mm of travel which is completely undamped and you get to experience that travel if a fly lands on your handlebars or someone drops a matchstick on the road. I think it only takes a year or two and they normally corrode solid anyway which is a good thing. Each leg is just a carrier for rain water as the seals perish quickly.

However that said I feel the same bike with rigid forks can be surprisingly good, being a mountain bike it allows for very large profile tyres so fantastic grip and suspension from those and they are fine to ride and actually easy to ride I think because they are very stable. A lot of people like fat bikes well this bike is half-way house between a fat bike and a normal bike.
Top
Post Reply
7 posts • Page 1 of 1