Thanks to some fatherless scroat taking a sharp implement to my 1990s vintage Selle Royal Gel saddle, its time to invest
in a new sit-upon.

Me: As my forum name implies - I'm a big bloke - Now in my Mid 50s - a shade over 6ft , I would describe my 52/44/31 build as somewhere between "Amateur Rugby player" and "Brick Outhouse" (although I abhor the silly game where 30 blokes ruin a perfectly nice weekend trying to incubate a leather egg that will never hatch). I "bulge" where regular cyclists "nobble", I "steak" where others "Haloumi". You get the picture.

My Bike: I ride a VSF (Faharradmanufaktur) T400, which If you haven't seen one, I would describe as a "trekking bike" or "LWB no-bounce mountain bike". Its a 26" wheeled tractor - weighs as much as a dutch roadster , but I love it - takes on every terrain, and has trundled me , panniers and my even my youngest on a trailer bike for almost a decade,

I remember some 4 bikes ago having a brooks leather saddle fondly - I recall once broken in that it was considerably more comfortable than my
gel saddle has ever been and am of the mindset to replace it with a B17. But then I saw the Brooks Flyer. and the 67....

Mindful that I'm getting older , ride on all sorts of terrain, and have zero suspension other than my glute's, I am tempted by the flyer. but
prefer the look of the B17 - which is what I had previously.

So which of the 3 saddles does the panel think would suit me best please ? and most importantly - why ?

by RRSODL
Saddles are a very personal thing, having said that, I have owned all 3 saddles at one time or another.

The B67 was my least favorite, too big, too bulky and I didn't like the leather particularly.

B17 ( I had the special version with copper rivets) it was very nice and I regret selling it.

Flyer, just like the B17, I don't think the springs achieve much, I don't feel any difference with the B17....and I'm heavy enough. I still have it but I opted for a suspension seat post instead and a plastic saddle.

by Bowedw
I have the Brooks B17 and the imperial and recently bought a Spa equivalent to the Imperial. Dimension wise it's about the same but in reality is is like a B17 on steroids. I have it on a trike and so far it's proving to be a good option.

by Jamesh
What's your riding style are you sit up Dutch style or are you more stretched out?

Also what intensity of cycling?? Leisurely or more sporting?

by bigbloke
Thanks for the feedback guys !

With regard to my stance I'm would classify myself as a 60 degree rider not a "sit up and beg" so from what Ive read in the
last 24 hours the 67 is out and its a choice between the B17 and the flyer.

The bike has flat bars with a slight rake and has after market bar ends fitted for uphill honking. Theres too much of me in the way for
drop bars although I still have them on my old 531 Tourer.

I'm not fussed about copper plates and rivets as I dont anticipate arthritis of the glutes! just some "breaking in" pains.

I'd not thought about a suspension seatpost - I think with my bulk I would find it in full compression most of the time!
maybe thats something to look into at the same time...

by simonineaston
I'd just like to throw a spanner in the works and say trying to predict which Brooks will suit, even for oneself... is like trying to predict the outcome of an election of a country's head of state - ooh, I don't know - let's pick a country - say, the USA! You think you know the outcome but come the day...
On paper, I like the B17 & I do not like Pros - Lord knows, I've tried enough of them. So, what am I riding? Yes, of course - a Pro short. Not only is it the thickness I don't get on with, but it's the length specifically aimed at women (a gender group to which I do not belong). Is it comfy?? It sure is! You have been warned...

As I am fond of remarking, my favourite ever Brooks, which felt like a feather-bed, was a vintage and distinctly pre-loved B72.

by julk
I use both, a B17 titanium on a Brompton and a Flyer on a Thorn.
I ride mostly on tarmac and find the Flyer has the edge for comfort on potholed sections (too common nowadays).

by pwa
Aren't the sprung Brooks saddles prone to being a bit noisy? All creaks and squeaks?

simonineaston wrote:
As I am fond of remarking, my favourite ever Brooks, which felt like a feather-bed, was a vintage and distinctly pre-loved B72.

by WrightsW5
For me nowadays i'd get a Flyer instead of a B17, in the past it would have been the lighter B17. What i'd actually get and have now on one of my bikes is a Brooks B73 type layout saddle, except mine is a Middlemore B3, and it's on a track frame bike. I find I can have a sprung saddle on a race-like bike or upright bike, but not have a narrow saddle on an upright bike.

by gregoryoftours
I haven't got on with a b17 yet, maybe I just haven't given it long enough. I've had a b67 but I don't think my riding position was upright enough for it to suit me. I found it too wide and the sides dug into the backs of my legs. I do like the flyer - I really appreciate the suspension over longer distances on rough surfaces, and I think it should last longer than a suspension seatpost. I also don't like the free play you get with suspension posts. The creaking - I got rid of it once, for a hundred miles or so. I've learned to love it!

by saudidave
The B17 is the comfiest seat ever made. I've been riding one (not the same one I might add) for 56 years. I had one on my Falcon Black Diamond when I was 11 yrs old I have one now on my ebike and many others on a succession of touring bikes

The squeaks and creaks are down to a lack of preparation of the saddle. It should have proofide applied to the underside as well as the top and that on the underside should be liberally applied at the points where the metal frame and leather meet. You then melt the proofide at those contact points using a hair dryer and move the seat around so that the proofide runs between the metal and the leather.

The result, in time is a SILENT Brooks B17 that is perfectly contoured for yo ass!

by WrightsW5
At squeek points I would heat the Proofide tin slightly to liquify it and dip a fine artist brush in and put some where I need it. Do the heating outside if possible if the fumes would affect you. I would never proofide a saddle underside if for a bike with mudguards.

by saudidave
With respect, if you google it you will find that many of the answers advocate applying proofide or similar to the underside as well as the top on a new leather saddle.
Sheldon Brown, whose knowledge of bicycles was encyclopaedic even recommended immersing the saddle when new, never mind just treating the top!

by WrightsW5
If you look around the internet and can find instructive comments that originated in bygone decades, or saddle experts in the present day, saddles should only be proofided on the "finished side", as the instructions on this vintage tin show, 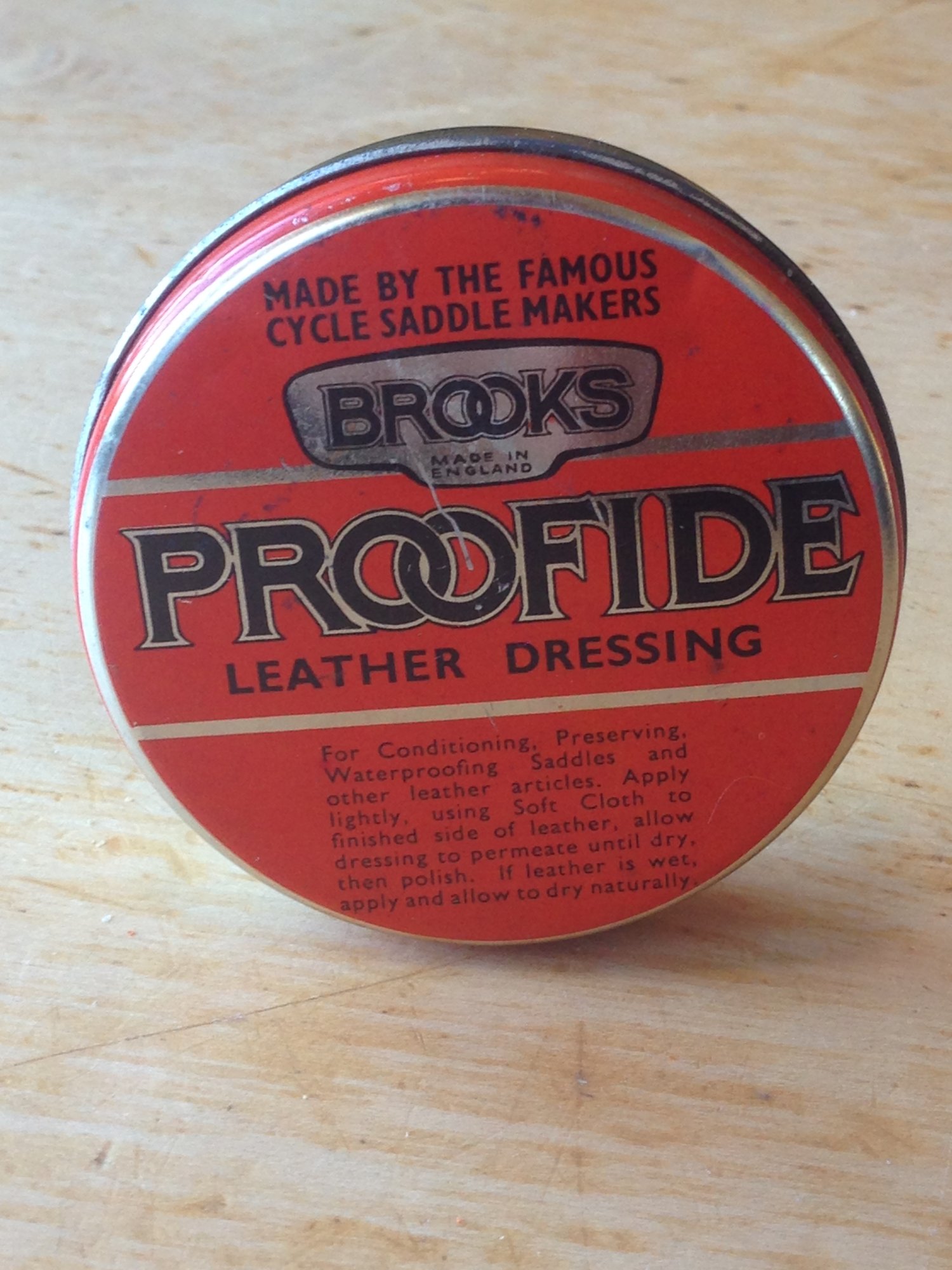 In more recent years Brooks instructions were to proofide the underside once and not polish off for a non-mudguard bike. The whole point of a leather saddle is that any moisture, rain, sweat, absorbed can evaporate through the pores on a natural underside, even more so than the upper side. Proofide is not meant to create a solid impermeable waterproof barrier but to provide some water resistance.
Sheldon Brown's information is mostly brilliant, but not on leather saddles. He also mentioned something about never tension a saddle. You can choose not to, and Brooks' warrantee will be void, and void if you proofide it excessively or not at all, or use the dreaded neatsfoot oil.
All times are UTC
Page 1 of 2
Powered by phpBB® Forum Software © phpBB Limited
https://www.phpbb.com/