Brucey wrote:Actually, looking at your latest photo, the FD is set too high I would say, and the worst wear on the FD coincides with the position of the chain when it is already on the big ring .........

The bike came in a box, ready assembled except for 'bars and seat+seatpost and wheels. I bought mudguards as well.
I immediately saw that the front mech was too high, so reset it.
Trouble was, when I got in in the stand to check it all out, the front mech inner plate caught on the middle ring, so I had to put it back as delivered.

Note.
I assembled it in the livingroom! 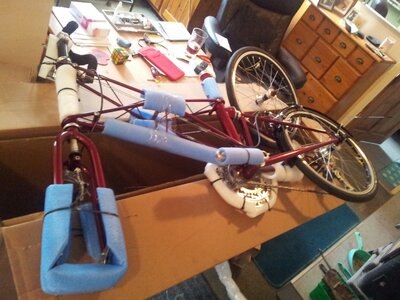 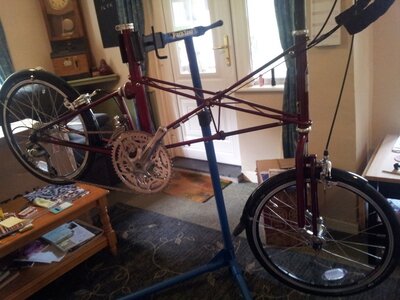 Dunno why the mech looks like it's worn where it is. I'm very touchy about chain rub. It can only be therefore, changing from outer to middle. I would reckon though, the hard change is from middle to outer, so that's where the wear will be.
Mick F. Cornwall
Top

Mick F wrote:…. It can only be therefore, changing from outer to middle. I would reckon though, the hard change is from middle to outer, so that's where the wear will be.

from outer to middle doesn't impose any load on the inner plate of the FD, so it has to be the middle to outer (M-B) shift and/or rubbing whilst the chain is on the big ring.

Here's a better photo wot I just taked.
Off out shortly, but I may be re-assembling the bike to some degree tomorrow, so will look very closely to see where the wear is with respect to chain on rings. 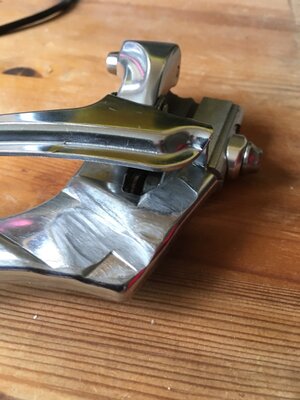 the other thing which occurs to me is that the FD is set further backwards than normal in part because of the adaptor. This is likely to be no problem when the FD works in the 'old school' way but it may further interfere (in a non-obvious fashion ) with the workings of a FD with a shaped inner plate.

Looking at the latest photo just reinforces what I said earlier. The shift ramp is now a groove that is acting as a chain trap. As soon as the chain tries to rise its digging into the groove in the back plate rather than getting lifted up on to what was a progressive ramp.
Winter had arrived in the land of Kernow. Along with it came wet roads and cool winds.
“Oh, my wheels and coupling rods!” Peetee exclaimed.
Top

There is an ultegra fr.mech--also worn? that MIGHT BE BETTER THAN YOURS on For Sale board.
Possible cheap solution?
Perhaps worth your while to have a look .
Listen to what others advise.
But, at £12 this might be cheaper experiment than new replacement?
Top

Lescargo,
Thanks, but I'll stick with what I have for now.

The things I do for you lot!

Assembled (temporarily) the gear cables and fitted the chain.
Worked the mechs this way and that and with some strip of masking tape on the front mech.
With a ball-point pen, I marked the centre of the chain's position inner, middle and outer.
Removed the chain, took off the front mech, and than transferred the pen marks to the inner cage and marked off with a chunky felt pen.

The photographs speak for themselves, but you can see where the rub marks are inner to middle, and middle to outer.
Going to the outer is more often than not, a difficult change. Sometimes it's instant, and sometimes problematical.

If you want more photographs, you can sing for them. The bike is now almost complete, and that's the way it's staying! 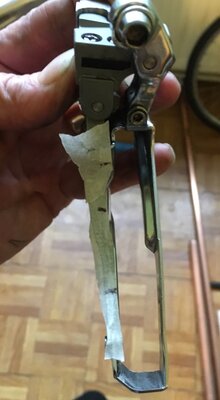 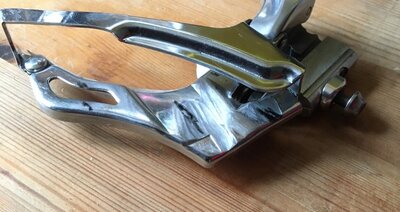