OEM rim tapes that are not good enough.

OEM rim tapes that are not good enough.

lots around, like this for example (rim is Exal TX19, double walled, no eyelet) 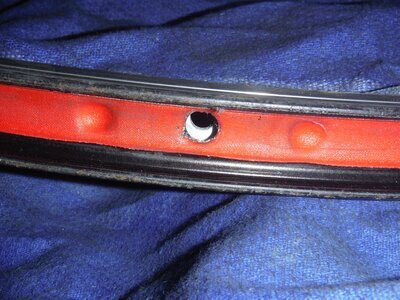 -and this is one of the better ones.

IMHO this is one of the most common faulty parts on new bikes.

I'd agree, rim tapes are a much over looked component, the fact that not even Mrs Trellis from North Wales has replied to Brucey's post suggests this.

I also see a lot of duff OEM rim tapes, mainly :
On cheap bikes,
1. A strip of rubber that manages to perish despite being in the dark hidden from the sun. Take the tube out, and the tape falls out as it has perished across its full width, sometimes in more than 1 place.
2. A tape as above or other types of tape, which end up off centre so one side of the tape sits up the side of the rim. This often results in the outer tyre having a low spot when inflated, as the tyre cannot slide up the rim tape to sit on the seating part of the rim. This is particularly the case if the tape is on the wide side. More an issue with cheap tapes/tyres than decent stuff.
3. A rubber rim tape where the join at the valve hole is 2 overlapping ends that are glued/bonded together. Some times the joint alignment and or the double thickness of the rim tape at the valve hole results in the tape's valve hole always sitting off centre (off center as in a left - right sense). This results in the valve always sitting angled noticable to the left or right side, sometimes with difficulty the valve can be made to sit correctly, sometimes only by replacing the rim tape.
On better wheels, you get;
1. A rim tape similar to the one pictured by Brucey, but is not stuck/glued to the rim, so it slides off center exposing the open spoke holes beneath. which in turn eventually exposes the air inside the tube to the air outside the tube.....
2. A full width rim tape that makes the tyre a rediculously tight fit to get on/off the wheel rim, as the tyre has to fit on top of the rim tape.

From numerous rim tapes I have seen, the bowing into the spoke holes (as per Brucey's picture) though not ideal rarely results in the tape splitting to cause a puncture. It does happen, but in my experience, not as often as I would have thought. I expect they all go in the end, it just takes longer that I would have thought.

Like a lot of things cycling, I'm sure there are many opinions on this....

... which brings me to Brucey's picture and "not wide enough". It could be "not wide enough" as it is better to have a greater width so more margin of positioning error re covering the spoke holes, or "not wide enough" in the sense that the rim tape doesn't cover the full width of the rim. Both points have their merits.
Schwalbe say to have a rim tape that covers the full width of the rim, including the "shelf" where the tyre beads sit. On a rim/tyre combination where the tyre is a loose fit, this is a good idea, as it makes the tyre a better fit. It also has the advantage if you are going down an alpine pass on a laden tandem with rim brakes, a full width rim tape provides a degree of thermal insulation from the hot metal rim, reducing the risk of the tyre blowing off the rim.
On the other hand, if you tyre is a tight fit on a rim, having a full width rim tape becomes a night mare as the tyre become an excessively tight fit - Continental tyres are an example of this (had 2 last week, Conti tyres + full width rim tape, I just got the tyres off with difficulty using metal tyre levers, plastic ones would have snapped).

For what its worth, I normally use Velox cloth tape on my own bikes. Its is a sad thing to say about modern rim wear, but my rim tapes have lasted longer than the rims! I would probably have fitted new rim tapes, but due to poor planning at home, finished the wheel build and realising that I forgot to get new rim tapes, stuck the old ones on the new rim.
Top

A poor tape but a least heads of spokes are recessed.
Top

the tape in my photo above is strongly reminiscent of the kind of tape that is used for holding surgical dressings; it seems quite sticky, but it is ultimately not sticky enough. It seems wide enough, but only just and it can move too easily. It seems strong enough, but it isn't, and in addition it rots if it gets wet. And of course it gets wet.

The tapes above are found on batavus bikes (amongst others) and a chum had something very similar recently on a new bike with Ryde 'Dutch 19' rims (which have a very similar rim well design). He upgraded the tyres to marathons and I suggested that he should double-check the rim tapes by squeezing the beads together and having a squint. He did so and found that both rim tapes had been displaced during the tyre swap, such that the spoke drilling edges were uncovered in places and punctures would surely have resulted. All better now with full-width velox tapes but it has made the tyres more difficult to fit or course.

FWIW I have been known to re-use velox tapes; my trick is to use a quick squirt of aerosol adhesive on the rim bed (onto the spinning wheel is best) before refitting the tape. This means even if the velox has ''lost its stick' the tape will still adhere reasonably well, in the er, well...

does anyone else find that velox tapes can vary in length significantly?

over the years i have had examples that are short despite being pulled tight when fitting, ones that just about meet and also some that overlap by maybe 2-3 inches.

all 700c but of differing widths.
Top

Schwalbe recommend their tapes to be wider than that.
"It takes a genius to spot the obvious" - my old physics master
Top

Tempting provedance I know, but all my rim tapes look like the one in Brucies photo - and I've never had a problem.
My 27" wheels all have rubber rim tapes which have been faultless despite some having been decades old.
I wonder why some people have problems with them?
Top

gxaustin wrote:Tempting provedance I know, but all my rim tapes look like the one in Brucies photo - and I've never had a problem.
My 27" wheels all have rubber rim tapes which have been faultless despite some having been decades old.
I wonder why some people have problems with them?

are the wheels you refer to built with single-walled rims? If so the rim tapes see much different loads. The rim in my photo is a twin wall design.

IME rim tapes in singlewall rims are much less likely to cause problems; indeed they can be in such poor condition that they will literally fall apart when they are disturbed (so cannot be refitted) yet won't yet have caused problems in service.

One of the few unexpected singlewall rim tape problems I have encountered, decades ago, was when I used rubber rim tapes which were slightly narrower than the rim well, once they were stretched to fit the rim (a Super Champion Mod 58). I didn't have much choice, because they were the only ones (of the correct nominal size) I could buy at the time. To my astonishment the tube pushed into the tiny gap (between the edge of the rim tape and the rim well), and then punctured, typically after a few tens of miles. This happened several times, and I couldn't believe this is what was actually happening, yet when I fitted slightly wider tapes (which I had to manufacture by laboriously trimming wider rim tapes; this involved trimming the edges of about 4m length in total...) the problem went away. Possibly I was running thinner-walled inner tubes at higher pressures than might have been usual on these rims, but even so most folk dismissed the fit of the rim tape as a possible cause of the problems. Yet there is no other explanation which fits the observed facts.

YMMV but I would never have rim tape so wide that it was on the shoulders where the beads are going to sit. I want the tyre beads to sit on metal.

I like the tape to be the same width as the rim well. I usually end up using Velox tape or more recently I quite like the snappy Continental ones.
Top
Post Reply
9 posts • Page 1 of 1