I’ve read with interest the various threads about freewheels lately.

I’m just using one (7 speed) until my rim runs out, when I plan to finally get a new wheel with a freehub.

But in the meantime my current cheap n cheerful freewheel has got pretty noisy after a few years use. I’ve just cleaned up the drivetrain and lubed the freewheel with thickish oil but it’s still noisy under load. Is it shot? It’s only a cheap one I fitted a few years back.

Video here https://youtu.be/FkoL1VzkvYI . The noise most definitely isn’t a poorly adjusted derailleur by the way! Even tho it sounds a little like that.

If so I’d like to replace it with something reasonable to get me through until I come to upgrade the wheel properly.

From the recent freewheel threads on here it seems the current sunrace and shimano ones (I’m definitely not going to be forking out £50+ for a IRD one!) merit discussion. Which one should I go for or is it much of a muchness? 13-28 or 14-28 is what I’m after.

if the freewheel is noisy most people would (rather than fiddle with it) just replace it, along with the chain. I think that sun race freewheels are good for the money, but you need to

a) be able to get the old one off the wheel and
b) know what size/number of sprockets you want in the new freewheel.

Most 7s freewheels end up about the same width on the hub but even so you may have to adjust the rear derailleur once the new freewheel is fitted.

Does the noise happen on all the sprockets?
I have known noise (almost) like that when a very worn chain runs on a little used (so unworn) sprocket (usually the larger sprockets). So, is your chain very worn? If you don't have a chain checking tool, can you pull the chain away from the the teeth at the front of the chain wheel? If you can, it is probably worn. This method is a but rough and ready, you can get the same effect with a fair chain and very worn chainwheel teeth.
There is also using a long ruler or metal tape measure to measure chain wear (each link should be 1/2", the pin distances increases with wear, I forget what the wear per 12" is for 0.5% wear).

You mention you have just cleaned the chain, sometimes cleaning an okish but mucky chain washes all the muck out from the pins/rollers/plates etc in the chain, allowing to worn bits to suddenly "stretch" out ie the pins can move into the worn bits previously filled by crud. Something I learnt years ago, cleaning a chain to find its worn out, very annoying...!

Thanks for the suggestions. It's a brand new chain and the noise is the same in all gears. I'd already successfully removed the freewheel for cleaning (and flushing out and then soaking in oil), so I think I'll go ahead and get a replacement sunrace freewheel on brucey's recommendation. hopefully it will last until the rims finally wear out!

Sounds like it’s a problem to do with the cones or bearings of the wheel axle. It’s not happening when freewheeling in the workshop but does it do it when riding and freewheeling?
Winter had arrived in the land of Kernow. Along with it came wet roads and cool winds.
“Oh, my wheels and coupling rods!” Peetee exclaimed.
Top

I had considered the wheel bearings / axle being at fault, but I put the wheel in the frame after removing the freewheel, span it, and there was no noise at all. The wheel bearings are smooth as a whistle when turning by hand, with no play whatsoever
Top

This can be the case when unloaded but when ridden or when cranked in the workshop a perpendicular load on the axle can be enough to make the rough bearing audible.
Winter had arrived in the land of Kernow. Along with it came wet roads and cool winds.
“Oh, my wheels and coupling rods!” Peetee exclaimed.
Top

Interesting! I will fit a known good single speed freewheel i have lying around somewhere and see if the noise is still there. (i dont have any other multispeed freewheels to test with). thanks.

Edit: No noise with the known good freewheel, so new freewheel it is
Top

Just wondered, while I await delivery of a replacement, if there is any danger of using the bike as it is with a freewheel that it’s now clear is making that noise. Is it just an annoyance, or does it indicate that the pawls or whatever could fail at any time under load, causing an accident?
Top

Sorry to bump this but I was hoping to get out for a ride tomorrow morning, and just wondered if anyone could put my mind to rest as to whether the freewheel, tho noisy, is safe to use in its current state, or if in these situations there’s a risk of the drive suddenly failing, causing an off.
Top

IME noisy freewheels usually get that way through water inside them and once that has happened the bearings get more free play than they should and the pawl springs inside the freewheel tend to rust away.

Either thing can cause the freewheel to fail. I'd suggest it would be prudent not to ride out of the saddle on that freewheel.

Cheers Brucey! A gentle local ride it is then.
Top

Noises occurring when pedaling doesn't necessarily mean that damage isn't in the freewheel, it often is. The bearings inside the freewheel mechanism are static when pedaling but they are loaded in this state, and this load on them is shifting as the whole lot turns together pulled by the chain. Consequently, cracks and clunks caused by worn bearings/races inside freewheels are often louder than when coasting, when the bearings are running but there is no load on them. The same is true for damaged/sticky pawls/springs - they can make some awful noises as power is applied to the pedals. All of this is aside from the hub bearings themselves, which are also likely to be noisier when power is applied if they are damaged or badly adjusted. Of course with freehubs the drive side hub bearings are usually part of that assembly too.

Flushing oil through a freewheel will almost inevitably make it noisier, at least for a bit, as detritus will be washed out of place and not all out of the freewheel, and any internal damage will produce more noise with thinner lubrication.
Top

I just took another look at your video and the noises are exactly what I'd expect to hear from a freewheel with a little bit of slack in the bearings, where water has got inside and damaged the bearing surfaces. As noted above a thin lube inside the freewheel body will often make the noises worse than they were; the sound you are hearing is a bit like the sound you get when walking on a shingle beach; balls are sliding (instead of rolling) over imperfectly smooth surfaces under load. With smoother surfaces and/or less slack, less load/more rolling and/or thicker lube, things can be a lot quieter.

You may have noticed that the noises mainly come in two episodes per wheel revolution; this is usually because the pawls are set 180 degrees apart inside the freewheel body and this means when the bearings are a bit slack, the freewheel moves twice per revolution, each time using one pawl as a fulcrum. This tends to wear the pawls quicker than normal and because the load isn't properly shared between pawls and it can even cause the pawls to break too.

The freewheel appears to be a SunTour New Winner 'ultra' 7s freewheel or possibly a similar 'winner pro' / 'winner' model. There was even a lightweight model which used similar sprockets. These freewheels use two, four and six-dog removers respectively. They all look similar once built up, because they share the sprocket configuration in some respects. 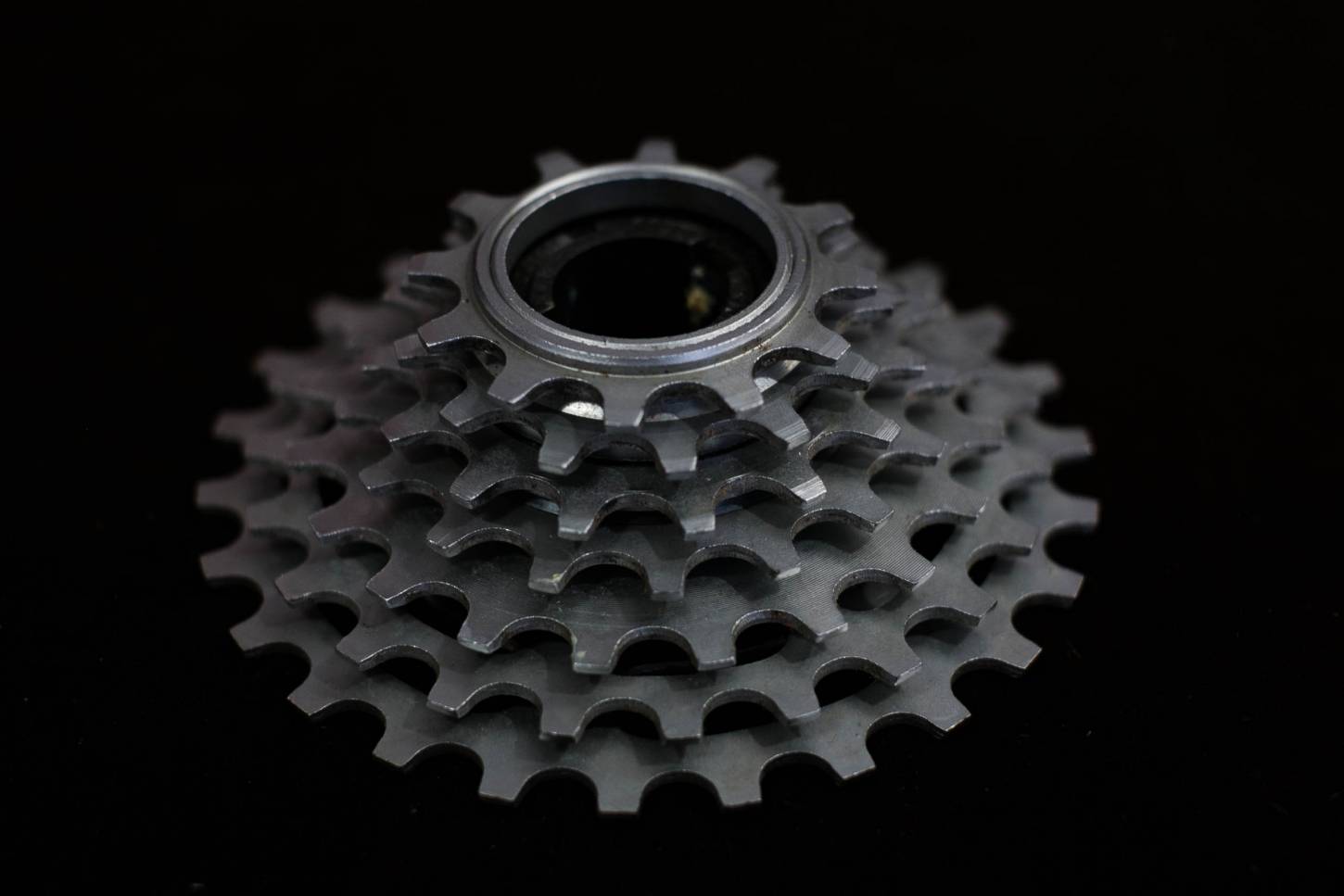 a New Winner 7s freewheel, but from this angle (if you can't see the remover slots clearly) it could be one of several models

BITD I used NW freewheels extensively (I bought my first one in about 1979) and they are one of the few freewheels that have a bearing setup which is adjustable via screw and locknut (rather than shims), so if this is what you have, you may be able to overhaul the mechanism.

If built as a compact 6s freewheel you can see the adjusting parts;

but on a 7s model the top two sprockets need to be unscrewed (as a pair) before you can see them.

If this is a SunTour freewheel of the type above I suppose this is one of the few freewheels I personally would bother trying to repair. However this isn't for everyone, and a modern 7s freewheel will undoubtedly shift better (because of improvements in sprocket design). Having said that, if you have a 12T top sprocket (possible with NW 7s) you won't easily find that in a modern 7s freewheel, and furthermore many modern freewheels have appreciable slack in the bearings even when they are new; the only reason they are not noisy from the start is because the bearing surfaces are smooth.

Anyway if it is a NW you may be able to fix it, or at least make it better. If you decide not to bother trying, please don't throw it away; someone (eg me!) will want it for spare parts.

I’m afraid unless Spa cycles were giving me an “unannounced upgrade” this is just a cheap as chips freewheel. I bought it brand new from them in April 2018. I had originally ordered an IRD one but then spa phoned up to say it was no longer in stock but they had a freewheel for £10 they would substitute instead. As I needed to finish the bike build pronto I accepted the substitution and the £40 refund!
Top
Post Reply
18 posts