Bench vice without a bench

Bench vice without a bench

I live in a small flat and my only workshop space is the living room. Occasionally there's a job that would be so much easier with a vice (I'm reminded of this by the hub servicing thread) but there's no option for one as a permanent fixture. My tools are in a chunky, wood effect, filing cabinet and I have G clamped stuff to the top (With suitable protection) It's a strong enough base for anything I'm likely to do.
So, I've seen vices that clamp to a table top, or there's probably ways to temporarily attach a standard vice. Interested in ideas, experience and specific recommendations, or things to avoid. Thanks
Top

There are various types of vice designed for indoor use for modellers and craft designers. Whether they are any use to you depends on what you are working with.
Winter had arrived in the land of Kernow. Along with it came wet roads and cool winds.
“Oh, my wheels and coupling rods!” Peetee exclaimed.
Top

How about fitting a rigid wood or steel overlapping slab to the top of the filing cabinet? That would be stronger against twisting and allow easy attachment of a vice.

IME a 3" bench vice (steel not cast iron) is strong enough for most bicycle jobs.

You can do a lot with such a vice bolted centrally to a length of timber (eg 4x2" section) and then use G-clamps (or coach bolts and wing nuts perhaps) to temporarily secure the timber to something more substantial. The longer the length of timber the better, but a length which will fit into a filing cabinet drawer is long enough to be useful for most jobs.

If you have nothing to clamp the timber to, attaching the vice to one end of the timber allows you to stand (or sit) on the other end and this keeps the vice steady enough for most jobs.

[edit; BTW it makes most sense to permanently attach the vice to the timber and use a temporary mounting between the timber ends and something convenient; the latter mountings see a small fraction of the load whenever there is twisting to be done, whereas the mountings to the vice body itself need to be as good as you can make them.]

I have a heavy vice I got from Aldi for maybe £10 or £15.
For stuff like wheels/pedal servicing etc I just put it on the tiled kitchen floor with a bit of cardboard under it and then crouch down over it.

Would be more comfortable on a bench I am sure but works OK for such jobs where I have no need to exert strong forces on what's in the vice.
Sweep
Top

You could also put the 4x2 timber brucey mentions in a workmate, the cheap ones cost about £20 and are generally useful around the home.

Jamesh wrote:You could also put the 4x2 timber brucey mentions in a workmate, the cheap ones cost about £20 and are generally useful around the home.

That's kind of what I did with a cheap workmate folding table, except I made a bench top with surrounds from some scrap wood , bolted the vice to the top, then clamped onto a length of timber screwed to the underside. I meant to get
around to putting a couple of crosspieces onto the timber to avoid it coming unclamped if I was ever heaving on the vice.
The vice is an old Record No '0', 2 1/2"jaws with a swivel base that I bought second-hand. I have the bench against a wall with a bit of melamine board leaned against the back to avoid contamination of the plaster by oil etc. It falls down the back occasionally (needs a longer length of board), this is in a spare bedroom, but if I was stuck for space it comes apart easily and could be stored upright, and obviously the work mate folds flat for storage as well.
The swivel base is useful on occasion.
I think getting one that bolts through rather than clamps to an edge is a good idea. I used a full size vice bolted to a bit of aluminium plate from many years just placed on the ground or whatever surface was handy.
When they were open, second hand tool stores on markets/boot sales always seem to have a selection of old Record vices. There are plenty on ebay but a lot of them look pretty clapped out with a fresh coat of paint and called 'refurbished'.
You can see from the state of the jaws how much work they've done. Postage would be expensive as well I should think. 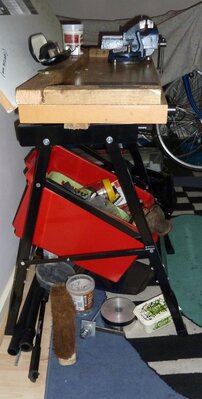 I made the mistake of buying an edge clamp vice from Wilkos to use in a flat I was living in, my example was very poor quality with a poorly cut crew thread, jaws that didn't meet correctly and the clamp did not secure the vice sufficiently as I recall, I wouldn't buy again. I don't know what the quality makes are nowadays, anyone recommend any ?
A former thread of vice, where I have bored previously on the subject.
Good luck.
viewtopic.php?t=105415&p=1005007#p1005007
Top

I'd agree with those who have said it needs to be bolted to a plank or similar. Going back to the 1950s when we lived over a shop in Castleford, my dear old dad had what was then a new Record vice. I don't think he'd thought through what he would do with it but initially, it was only used a bit like an adjustable spanner.

When we moved to our own house which was a Victorian terrace house, there was a bit more freedom. The house had been modernised a bit and the large cellar which had windows out over Bramley Park and had been a scullery was converted into a sort of dining kitchen. The kitchen table was massive - both in size and construction and left to his own devices, I think he would have screwed the vice to a corner of the table.

The compromise was that one of the other cellars was already divided to form a coke store - immediately under the grate for the coalman to pour it in. The divider consisted of really heavy boards which slotted into vertical slots in the walls. We bolted the vice to the face of the top board and it worked a treat. It could be lifted out and steadied by somebody standing on the board if that was really necessary. We kept all our bikes including a tandem in that cellar as well.

I fancy that something clamped to the edge of a table would only be suitable for gentle work.
Top

You require the 'RECORD IMP'
Served me well for years.
Can also be screwed down. 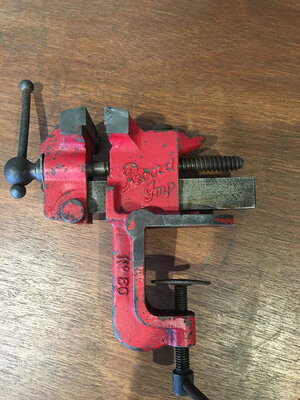 Record Imp (not mine but identical)

Jamesh wrote:You could also put the 4x2 timber brucey mentions in a workmate, the cheap ones cost about £20 and are generally useful around the home.

My thoughts too. I have a very good Black and Decker workmate but when I was working on jobs away from home I used a cheap one from Screwfix because it was so much lighter. So if you have space to store it you can use to clamp a small vice to and somewhere to lay parts and tools.
Top

[quote="jb"]You require the 'RECORD IMP'
Served me well for years.
Can also be screwed down.
An article about the Record Imp :-

Thanks folks, I think a standard vice bolted to some wood looks like the way to go, that looks less likely to damage the cabinet than the clamp on type and I think I can get hold of a scaffolding plank offcut. I like the idea of a Workmate, but if I had that much spare space they'd probably be another bike in it

Now, just finding the right vice, I'm not sure I get why Brucey is suggesting steel rather than cast, a quick google and they nearly all appear to be the latter. Any pointers? Maybe I'm just not googling the right terms. Also suggestions for price point? It'll never be more than occasional use, but I don't want to either spend more than needed or end up with cheap rubbish. As you've probably guessed, I know absolutely nothing about vices, so please keep it simple. Thanks
Top

they are pretty much all cast, its just that the best ones are cast steel rather than cast iron. If you expect to give the vice some real stick (eg using freewheel removers in it) and/or want it to last, I'd suggest a steel vice (eg a better quality 'record' one; they make both types and charge accordingly) . Otherwise a cheaper cast iron one may do, but they probably vary in quality too.

BTW if you are worried about the main plank splitting (eg where the bolts go through it), you can laminate it using some plywood each side.

Not sure about his pipe bending, thought it was more for small diameter round bar or wire.
However it is suitable for clamping to a work mate (to shut him up

) or the dining room table. I've bashed it with impunity pressed bearings in (or out) and used it as an anvil. It's been used on my tool trolly at work and in my home for cycle repairs
Not as good as a big bench vice but the best there is for its size & versatility.
Cheers

Hi, currently using mine at this very moment! Clamps on the end of the dining table. Think this was from ?Screwfix or similar a few yrs ago. 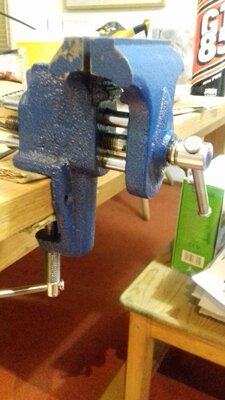 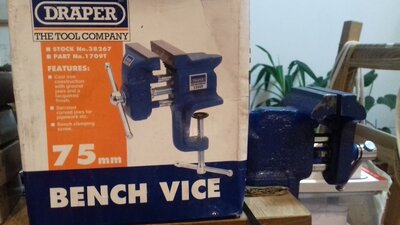