Tried a Carrera 20in bike today and while the saddle was quite high, it felt I was leaning very forward and quite alot of pressure on my arms.
I lowered the saddle and it felt a lot less pressure on the arms, but my legs felt very scrunched up when peddling. The bike has 27in wheels

Ideally I’m looking for less pressure on arms and a bit more stretching of the legs. Honestly, I felt very scrunched even though this bike should fit me...

I spoke to the guy at the shop and he said that I could buy a stem to heighten the handlebars, then heighten the saddle which will help with the legs.

To be honest it doesn't sound like you were getting good advice from the shop. I'd advise going to a different shop in the hope of finding someone who can help you.

At a guess, I'd say it could be that the frame is actually too small, making the front too low for you. You need the bars higher. You need a frame that puts your bars at the right height for you.

My advice is to find a shop with staff who know what they are talking about.
Top

In the modern era of sloping top tubes, frame size is not so indicative as it once was, but if you are buying new, you really do want the right size bike, rather than shelling out to make what the shop has in stock fit you.

Yes this is very true, I am having doubts, but it was Halfords so thought they’d be ok.
I will try a 22in even though that’s supposed to be too big, but they only had 18 and 20s on shop floor.

Would wheel size make any difference to the issues I mentioned? I can’t see how it would...
Top

Wheel sizes aren't important for the fit of the bike.

First thing is to get the saddle and pedals correct. Make sure you can get a foot on the floor - both of them on tippy-toes maybe.
When your feet and your legs are happy, you need to get your torso and arms happy.

It would help if we knew your height and inside leg measurements as we can then understand your proportions.

Also what type of bike was it MTB hybrid road?

Both will determine if the bike is a good fit for you.

You can adjust using seat post and stem but that's a poor substitute for a proper fitting frame.

Halfords, the shop that has past 'convictions' ( more than one) for supplying bike with front forks back to front.
Before sloping top tubes, a pretty accurate measure for a frame is inside leg measurement minus 9" ,
6" for Crank, 2" seatpin and 1" so as you knees aren't completely extended at bottom of stroke.
Sloping top tubes give you more 'standover height ' ( where top tube is in relation to you posterior when the bike is between your legs and you are standing on the ground) but still allow for relatively upright rider position. I agree the bike you tried sounds like it was a bit small.
Top

I had a look at the Halfords Carrera Subway bike when I was ordering my Cycle to Work scheme bike. I liked it and thought it was cracking value for money. It did seem to have a long reach though and I thought at the time I would want to raise the bars with an extender and shorten the stem .. to give a more upright position.

Bike fit is crucial. If you want a nice upright comfy position then my advice is to hold out for it and don't buy until you are happy ...

Our local Decathlon has been stripped of bikes, however new models for summer ought to be coming in soon. Maybe pop in and sit on what they have to see if its more comfortable?

See the pic below of a "stem raiser". these can lift the bars by about 3 or 4 inches - I use them on most of my bikes including my tandem to get a nice upright position. Get the bike shop to fit it thought since it might mean the handlebar cables have to be lengthened .. let them have all the faff of that... 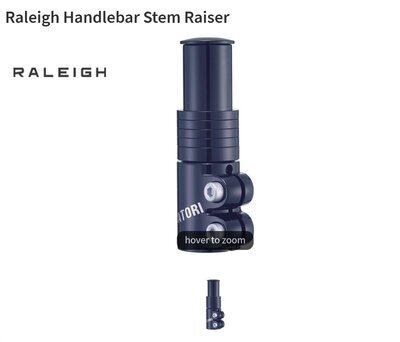 If you are a novice with regard to swapping parts on bikes it’s crucial you get something that fits you when you buy the bike rather than hope it can be changed at a later date. Otherwise you can fall into a whole heap of trouble with regard to compatible parts, confusing sizing and lack of knowledge or information at the point of sale. In addition the cost soon mounts up too. If you wanted to change a stem, for example you might end up forking out for new grips, 4 new cables (that are long enough for the raised position) and the labour to swap them all over.
Winter had arrived in the land of Kernow. Along with it came wet roads and cool winds.
“Oh, my wheels and coupling rods!” Peetee exclaimed.
Top

I've got an older Subway with 26 inch wheels (I think you might mean the one you tried has 27.5" aka 650B wheels if it's a hybrid like my newer one) and its head tube is shorter relative to its top tube, which means the bars are a couple of inches below the saddle. I could fit riser bars to it but I've always just left it the way it is because it makes it easier for me to adapt to the road bike when I'm switching between bikes. The next generation Subway - my newer one, the current one - they lengthened the head tube relative to the top tube so the bars are higher.

When I first started riding the older one (before I got the newer one, obviously) I felt the same as you to begin with - felt I was falling forward and actually got severe pain in my undercarriage on a long run, to the point where I had to stand the rest of the way home (the previous bike's frame was 18.5 inch and was really too small), but my body/posture just seemed to adapt and that's no longer any kind of issue. I've ridden thousands of miles on it now without pain, but it's never as comfy as the newer/current one - that's like my 'endurance' bike - I use it for club runs and the older one for transportation - partly because the larger wheels are cushier, even with the same size tyres.

Moving the saddle back on the rails can help prevent you tipping forward although it will lengthen the reach. I ran with my saddle set back almost to the maximum on the rails but recently realised that was too far. For the seat tube angle, I've since found it works best in the middle of the rails, with the saddle a little higher to keep the same leg extension. I reckon my saddle setback is now about the same as 531colin's and we're about the same height (except I think the old devil's probably at least two stone lighter than me!

You could always fit riser bars instead of flat bars on the 20 inch size - that would shorten the reach, effectively, and tilt your pelvis back, so you wouldn't be reaching forward so much, but you'd likely also have to replace all the cables and outers. Or the type of stem raiser suggested by zenitb (I've also thought about that for the older Subway), although the same might apply to the cables.

You might find you just adapt to the bike if you get it, though. Advice is always to adapt the bike to you but I don't always buy that - it depends on what you've been riding before and what you're used to - I think that's a big factor, often overlooked. My road bike is a 58cm when maybe it should be a 56 (there wasn't one available). It started off feeling too big, I swapped the 110mm stem for a 100mm which helped, but now for whatever reason it doesn't feel even slightly too big - your posture can adapt - I just wasn't used to the road bike position. Lance Armstrong rode a 58cm Trek throughout his career and he's 5ft 10in, whereas almost all his fellow pro cyclists his height would ride a 54, two sizes smaller. His arms were always straighter than the rest but his saddle to bar drop was less and it evidently worked for him.

Sorry if none of that's a lot of help. You could certainly try a 22 inch and see how it feels, if you can get hold of one. Wheel size doesn't really make any difference to fit, although I can only just straddle the top tube, which slopes - if it didn't I couldn't - on the 27.5 inch wheeled Subway but I have more clearance on the 26 inch wheeled one (although that's probably because of the longer head tube on the newer one, which effectively also heightens the top tube slightly. I'd reckon you'd only want the 22 inch frame if you're over 6ft though, at least, and you might not be able to straddle the top tube if you're not.

One other option would be to replace the stem with an adjustable stem - the kind with a knuckle joint - that way you can play around with bar height and reach and fine tune your position. You might get away without having to replace the cables. Older Carrera Subways - over ten years ago - came with one as standard.
Top

2 bits of advice....
1) get comfortable on your existing bike first, before you even think about buying another bike. With the best will in the world, the bloke in the bike shop isn't you, and although there are some generally accepted "rules" for bike fitting, there can also be a lot of difference between 2 riders comfortable position.
2) If the bloke in the shop says you will have to buy another stem to get the bars in a different place, find another shop. If you buy a decent quality bike from a decent shop they will fit a different stem for you to try the bike, or even swap the stem for a different one at the bike's first service (provided the existing stem still looks new).
Bike fitting D.I.Y. .....http://wheel-easy.org.uk/wp-content/uploads/bike-set-up-2017a.pdf
Tracks in the Dales etc...http://www.flickr.com/photos/52358536@N06/collections/
Top

9494arnold wrote:Halfords, the shop that has past 'convictions' ( more than one) for supplying bike with front forks back to front.
Before sloping top tubes, a pretty accurate measure for a frame is inside leg measurement minus 9" ,
6" for Crank, 2" seatpin and 1" so as you knees aren't completely extended at bottom of stroke.
Sloping top tubes give you more 'standover height ' ( where top tube is in relation to you posterior when the bike is between your legs and you are standing on the ground) but still allow for relatively upright rider position. I agree the bike you tried sounds like it was a bit small.

Is that why lots of older touring bikes are 23" to suit the average 32" inside legged chap???

It's more to do with your inside leg measurement than how tall you are . My contemporary as a schoolboy was a good 3 inches taller than me, but we both rode same size frame, his inside leg was ame as mine, he had a long 'trunk' and had longer Stem than me.
Top
Post Reply
13 posts • Page 1 of 1