Curious. It's completely unlike the grease port on the bottom bracket shell and if it were a tank, it would need a lower port for drainage. Ask the seller?
Top

it looks like steering lock to me. I've not seen that on a Peugeot before, but they may have copied (or been copied by) Raleigh built Rudges from the late '40s/early 1950s. 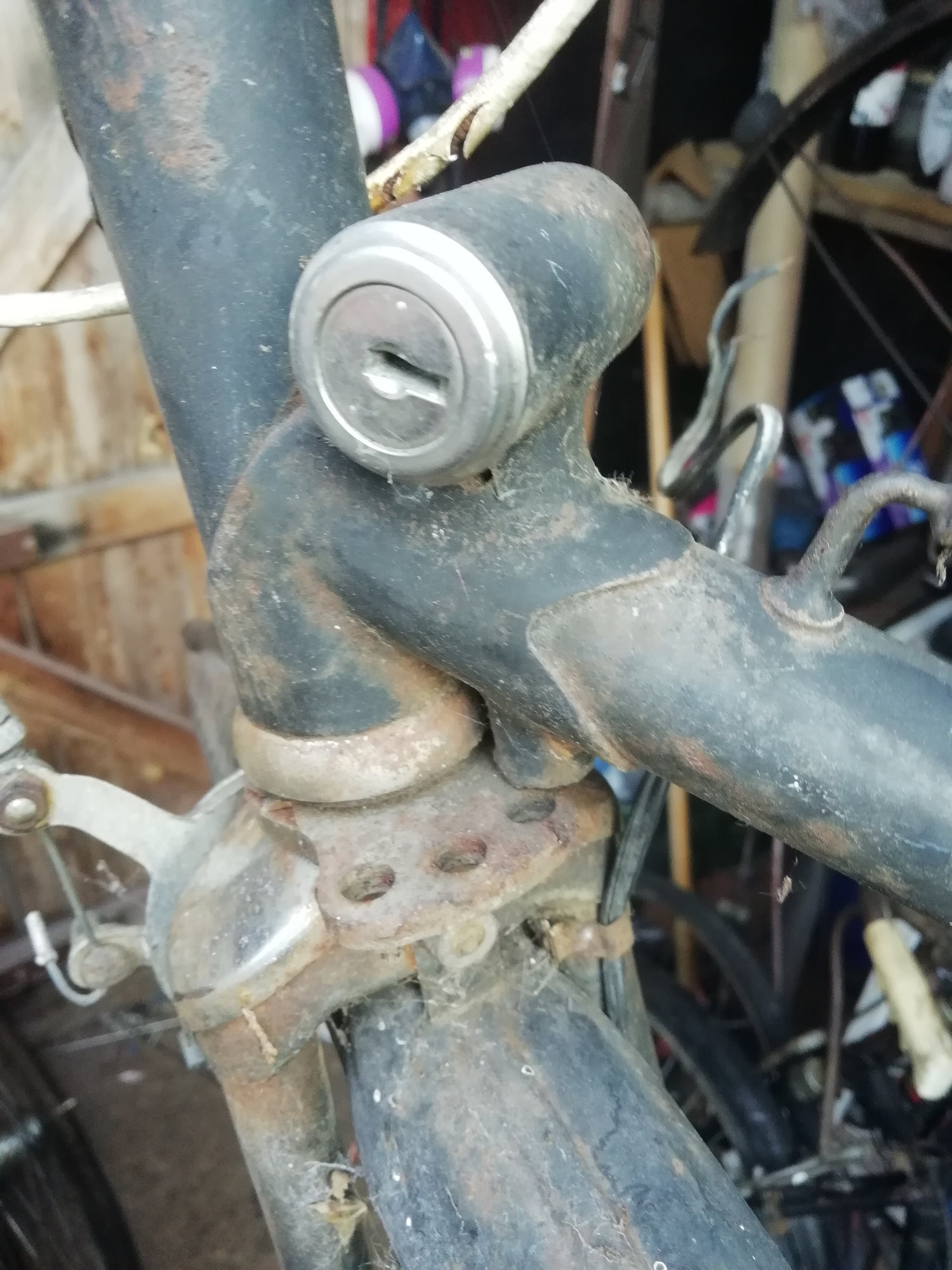 BTW if it is as I suspect on the Peugeot, there may be a hole (or other stress raiser) right where you wouldn't want it, on the most highly loaded part of the steerer.

I'd vote for an internal liquid storage system for fuel ( stove or nourishment). To be extracted by a Syphon. Tony Oliver did this to a tandem to enable stove fuel to be carried. Plugged the tubes before assembly and fitted a screw cap to enable access.
Made for Ben Searle if I recall.
At the last count:- Peugeot 531 pro, Dawes Discovery Tandem, Dawes Kingpin, Raleigh 20, Falcon K2 MTB dropped bar tourer, Longstaff trike conversion on a Falcon corsa. 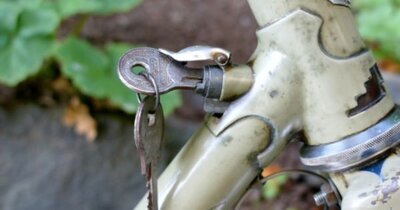 Good find. (Now to ask the seller if they have the key?

I was going for oil-filler (for the oil-in-frame lubrication, a la Triumph / BSA's '70s system), or failing that a 12v accessory charger pont... Nice frame, tho' - with the name 'Helium', are we thinking it might be très très légère...
byyeee,
SiE
Top

simonineaston wrote:…. - with the name 'Helium', are we thinking it might be très très légère...

I note with a rising sense of forboding that this lovely old frame is situated in Bristol...
byyeee,
SiE
Top

simonineaston wrote:I note with a rising sense of forboding that this lovely old frame is situated in Bristol...

Yes, I was also worried that one of my neighbours might be advertising in Comic Sans.

nice photo! I think it shows the lock in the 'unlocked' position, in that the lock barrel is protruding from the frame fitting. I have seen similar arrangements where the lock barrel springs outwards when turned, and to lock it you must 'push in and turn' . In the unlocked position, the lock cover wouldn't be able to close over the protruding part of the barrel completely, I think. This may mean that the ebay frame either has the lock in the locked position (possibly with the locking tang removed) or there is no lock barrel fitted. It is not uncommon for some feature which is not working, missing or broken not to be mentioned in the 'description' on ebay, and this is probably a case in point.

Thx Guys, Yes a bloody lock.. and agree with Brucey wrong place in a highly loaded point.. mine also French and 50's and a better build has no such frippery..I had it back to steel after a light media blast, no rust and the brasing quality amongst the best i have ever seen..here she is at 68 years old.... ready for flat sunny roads which are equally distant just now... will 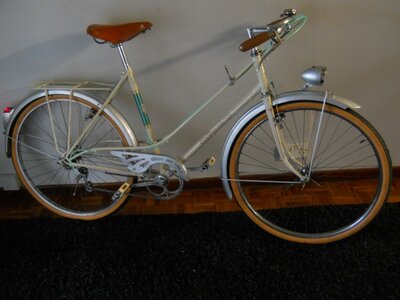 FWIW a while ago I bought an uber-rare ladie's bike (well little more than a frameset really) from that era, and I'm currently mulling over what to do with it. It is a (Rensch) Paris 'Type Dame' frame, all nicely done lugless (bronze welded), which pretty much means it has to be from the period ~1947 to ~1952 I think. The frame design is a similar overall layout to the one above, except this particular frame has an additional bracing loop between the down tube and the lateral stays, which is a feature I have not seen on any other Paris 'Type Dame' examples. It is meant for caliper brakes (Mafac centre pulls at one stage; there is one hanger remaining) and was probably built for 26x1-1/4" wheels originally. I think it will go nicely with 700x28mm but probably isn't wide enough (between the stays) for the very fattest 650B wheels and tyres to be fitted. It has no gear fittings, so it may have been singlespeed, Sturmey gear, or some kind of clamp on derailleur originally. 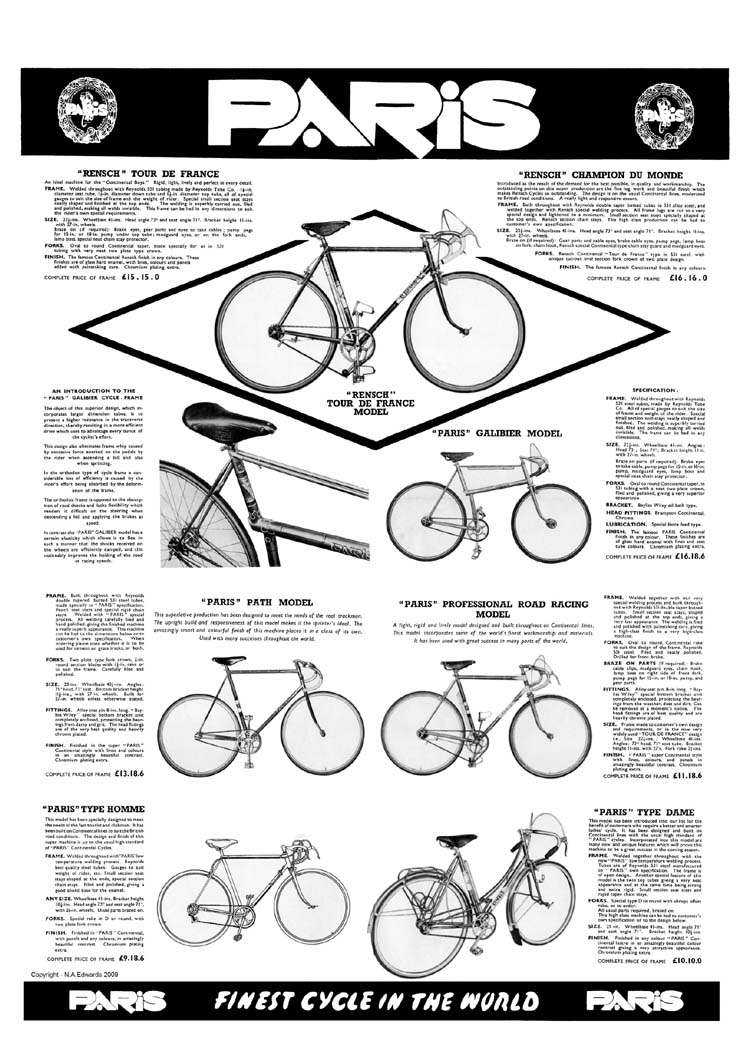 and (for reasons I neither understand nor agree with) everyone goes nuts for the 'Galibier' model, but the Type Dame is actually somewhat rarer, and arguably better suited to the intended task. I don't think I have ever seen another one in the flesh and I've only seen pictures of three others perhaps.

The closest I can find is this 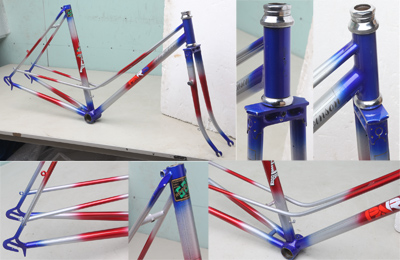 (To my surprise, the 'fade' paintwork is apparently correct to period; Rensch was doing this in the late 1940s). However mine is a larger size, has different paintwork (also not original), slightly different top eyes, different mudguard eyes, it doesn't have the plated fork crown, and it does have the aforementioned extra bracing loop in the frame. I'm guessing that both mine and the one above are later than 1948 because they both share the higher (than in the 1948 catalogue) intercept between the lateral stays and the seatstays. Also mine has straight lateral stays, rather than curved ones as per the catalogue.

I'm in two minds about building it up, largely because I'm not sure I'll do it justice; it really is something special; it is certainly very rare and it may be practically unique. Any suggestions?