I spotted this Ladies Gazelle Dutch Bike looking sorry for itself, amongst a larger fly-tip on the way home yesterday.
I took some pictures of the unusual extra seat post arrangement ; to shorten the reach ?

It looks like a bodge involving a TV aerial mast (or something similar), at first glance, but on closer inspection, I note there is a fitting for a cable adjuster at the foot of the extra tube (no idea what it's for)

Has anyone else seen the like before. I wonder if it's an after market accessory. Click for larger image.
It has drum brakes and a hub gear, and is a not dissimilar bike to this one on the Lovely Bikes site, though slightly older I think, as it has a riveted on headbadge. 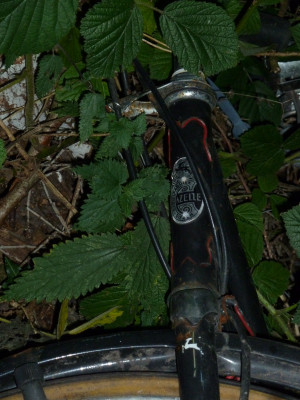 I rang the local bike recycling charity bloke, he says they send these type of bikes to Africa. If he doesn't rescue it I might be tempted myself.
A shame. 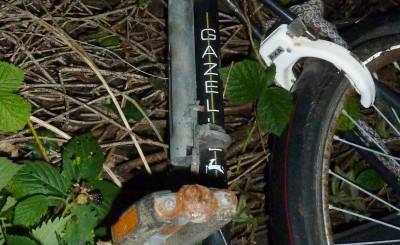 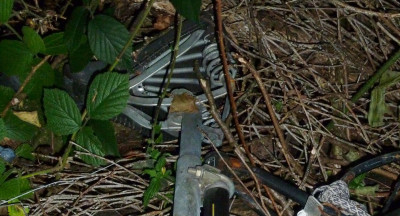 It is interesting and I can see the logic of the add-on tube.
Top

It looks like a crude bolt on device to allow the saddle to be raised and lowered quickly as required without tools. It would presumably allow the same bike to be used by adults with a significant difference in height/leg length, something which could potentially be useful if it were the only bike in the household, especially for a utility bike like this,.

That the key is still in the lock is not surprising since that type of lock typically uses a captive key configuration, i.e. the key can only be removed when the lock is in the closed position.
Top

Thanks for the replies.
Slowster, that would make perfect sense, looking at one of the pictures a bit closer, there's a slot at the front of the extra tube with a little tag sticking out with a hole through it ( for a cable ?) at the top of the slot, maybe it works against a spring or something. The clamps for the U-bolts are welded to the tube and it looks galvanised, so it's a tube designed to clamped to another tube for sure.
I might go and see if it's still there this afternoon and stand it up to take a closer look.
You are correct of course about the key in the lock, me being dull as usual.
Thanks again.
Nu-Fogey.
Top

You were indeed correct Slowster. The cable at the base of the extra tube operated something possibly similar to a bell crank, pivoting on a hole the opposite side of the tube, this in turn acted on a pushrod onto a spring concealed above. I traced the cable to
an additional brake lever on the left hand side of the handlebar. I don't quite see how the seat would be locked in position though yet , it springs up and down at the moment and the seat pin is a very loose fit in the tube (about a millimetre clearance all round). 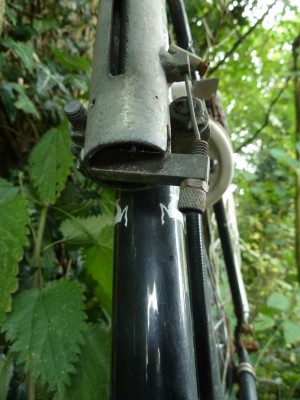 I did wonder if it's a form of suspension seat post, but if so what's the lever on the handlebar for ?
I can see the end of a chrome plated seat pin flush with the top of the seat tube, presumably to avoid the u-bolts crushing the tube.
The bike is actually a Gazelle Maxinette model fitted with 24" wheels, drum brakes front and rear; the rear being combined with a 3 speed Sturmey-Archer with a 1991 date code. Front bottle dynamo, but no lights. The nurses lock works.The tyres are u/s and all the cables are seized, I think it may have been used as a garden ornament at some point as there was a three chain hanging basket next to it and some wire tied across where the cross-bar would be on a man's bike,possibly for a climbing plant or something, who knows...
As was inevitable, after I reported it to the Police, it came home with me, so I shall see if someone claims it. 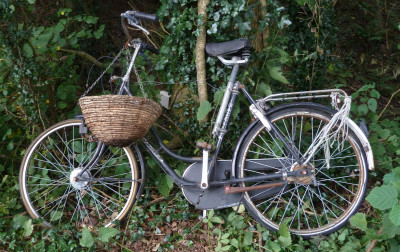 It's a genuine Dutchy; 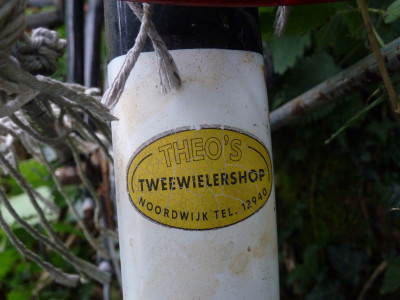 Go on, send them a picture .....https://www.theos-tweewielershop.nl/

I reckon its commercially-made, because its all very neatly machined and galvanised after machining/welding?

I reckon its commercially-made, because its all very neatly machined and galvanised after machining/welding?

Is it just to lower the seat for getting on and off?

Hi Col, I think it's probably an after market accessory right enough by the way it's plated (or a back door job at an engineering works). A mounting aid might make sense, there being no way of locking it that I can see, a bit complex for that though I'd have thought. It has quite a range of travel judging by the length of the slot, though I'm not sure how much of that is actually used. It's just being moved by the brake lever pictured below (the rear brake lever being concealed by the handlebar in the photo). 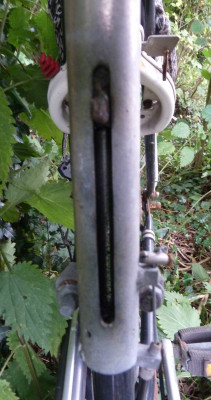 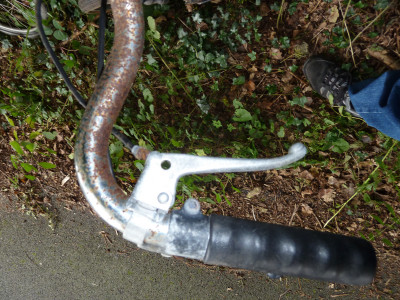 I've had a good look around the internet and not seen the like anywhere else. The loose seat post would drive me (more) crackers, I don't think a 27.2mm reamer was used at any stage during manufacture.
If Willem Jongman reads this thread this he may be able to shed some light on the subject, I might send the shop a picture as well.
Wheel Easy Col, good to hear from you.
Nu-Fogey.
Top

Surely it's what you need when your seatpost gets jammed in the seat tube. Just bang the old seatpost down the tube or cut it off flush with the top and strap on a new seat tube. Brilliant! There's already a market for it judging by this forum. The looseness of fit will ensure it doesn't happen again and remind you not to neglect this aspect of maintenance on your other bikes.
As to the cable attachment, possibly, as already suggested, a means of providing rapid saddle height adjustment without tools or for rapid saddle removal as an additional security measure. No idea why it needs a lever on the bars though.
Top

Edit- I should have pointed out that this only works on a ladies frame!
Top
Post Reply
9 posts • Page 1 of 1