by andrew_s
If you want people to actually read that, some punctuation and CAPS would be in order.

by LollyKat
...and some spaces between paragraphs!

by Ash28
Ok first attempt at a front wheel. Cobbled together a jig from some forks and some wood. I wanted some thing which could be left set up but removed from the Workmate.
The wood pointers worked well as I could scrape the rim without horrible scraping noises or damaging it
Clamped a block of wood on the bench for truing verticaly. Turned the wheel over in the forks to center the rim. I ground the retaining tabs off the forks which made this easier.
Used Sheldon for the lacing process. Struggled with some of the jargon "pulling spokes, trailing spokes etc " still not sure which is which. Got there in the end though.

I am going to try a rear wheel next.

by songsforpolarbears
My first wheel building experience. I just wanted to make sure I had things correct so far. Thank you very much. 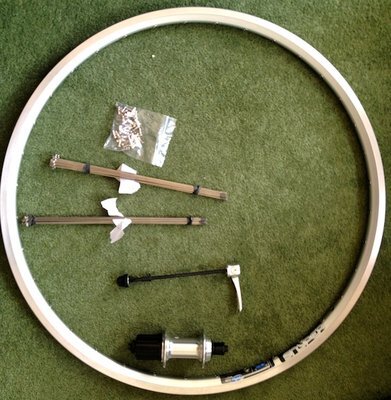 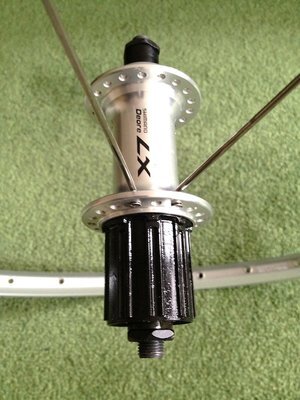 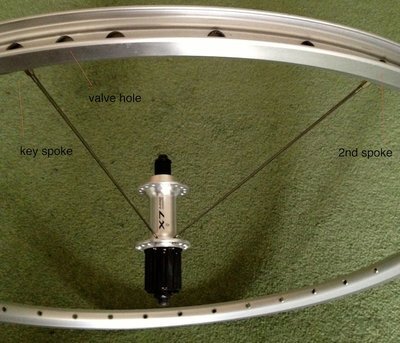 by Brucey
if they are to be 'pushing' spokes then that is fine so far....


I haven't came across the term 'pushing' spokes. Just 'leading' or 'trailing' spokes

by meic
I think that your keyspoke is fine where you have it, just to the left of the valve hole.

If you were to rotate your hub fully anticlockwise within the slack the spokes are giving it then the spokes would look as if they were pushing the rim.
Then you insert the nine spokes that look as if they are pulling the rim with their heads on the other side of the flange.

If you were to use the spokes you have already put in as pulling spokes, they would obstruct your valve.

by patricktaylor
This is how I do it - diagrams included (I hope they help).

Good luck with the wheels.

meic wrote:I think that your keyspoke is fine where you have it, just to the left of the valve hole.

I panicked because my keyspoke was not in the same place as Sheldon's! Anyway, all sorted now. I have inserted all the spokes, and I have the wheel in the truing stand. I was wondering:

what tension should my DS / NDS spokes be? (Rigida Snyper rim, Sapim race / strong spokes, Shimano LX Deore hub. 36 H. 26" wheel. To be used for commuting and the odd bit of touring.

by songsforpolarbears
my wheel is true laterally and radially.

The wheel dish is out my 1mm. That's close enough, right?

^ I wasn't aiming for any particular tension. It just kind of ended up that way.

I did not experience any spoke torsion (although I have experienced it in the past while truing old wheels).

I have not yet stress relived the spokes. That, plus some touch up truing afterwards, are the only steps I have left in the process.

songsforpolarbears wrote: The wheel dish is out my 1mm. That's close enough, right?

-for most people, yes.

You will probably find that the spoke tensions relieve 'unevenly' i.e. will change more on one side than the other, especially on the first cycle of stress relief. This may also alter the dish slightly.

If nothing else, such further cycles fall into the ' won't do any harm, might do some good' category.

by rich100
Is that strained squeeky noise I hear when tightening the nipples the spokes twisting? or is that normal when its getting tight?

With my first set, which I haven't ridden yet as waiting to finish building the bike, I've stress relieved by pushing on the rim at different points with the axle on the ground, repeated for opposite side. Does this correct any twist?

Also, I suspect my spokes were a touch too long, I had to replace the front set for a smaller size, but I think I got away with the rear set, although the spokes are protruding into the wheel rim well. What happens if the thread runs out? will the nipple just keep tightening past the end onto the unthreaded part of the spoke so long as there is thread left against the nipple and spoke? eg the nipple half way past the end of the thread of the spoke so only half of the nipple engaged on the threads....is that possible or am I looking at it wrong? Is this perhaps the cause of the noise I mention above?

rich100 wrote:Is that strained squeeky noise I hear when tightening the nipples the spokes twisting? or is that normal when its getting tight?
.... What happens if the thread runs out? ..... Is this perhaps the cause of the noise I mention above?

you can sometimes get a noise between the nipple and the rim, but if a (lubricated) nipple makes a squeaking sound on a spoke thread and the spoke is poking out of the top of the nipple, you likely have your answer, you have indeed run out of thread.

Both spokes and nipple vary somewhat, but most combinations allow the spoke to protrude by about 1mm and some up to ~3mm. If in doubt, check how far you can screw a similar nipple onto a similar spare spoke.

The noise BTW is probably made at least in part by 'deformation twinning' in the brass. Brass nuts on steel bolts often 'cry out' when overtightened. Other metals also undergo strain-induced phase transformations, hence 'Tin Cry' amongst other things.