For discussions about bikes and equipment.
Post Reply
27 posts

rjb wrote:Here's an alternative idea for using brake levers with bullbars. Old weinmann levers with the cable routing reversed. What I don't know is if the cable pull would be sufficient for V brakes. 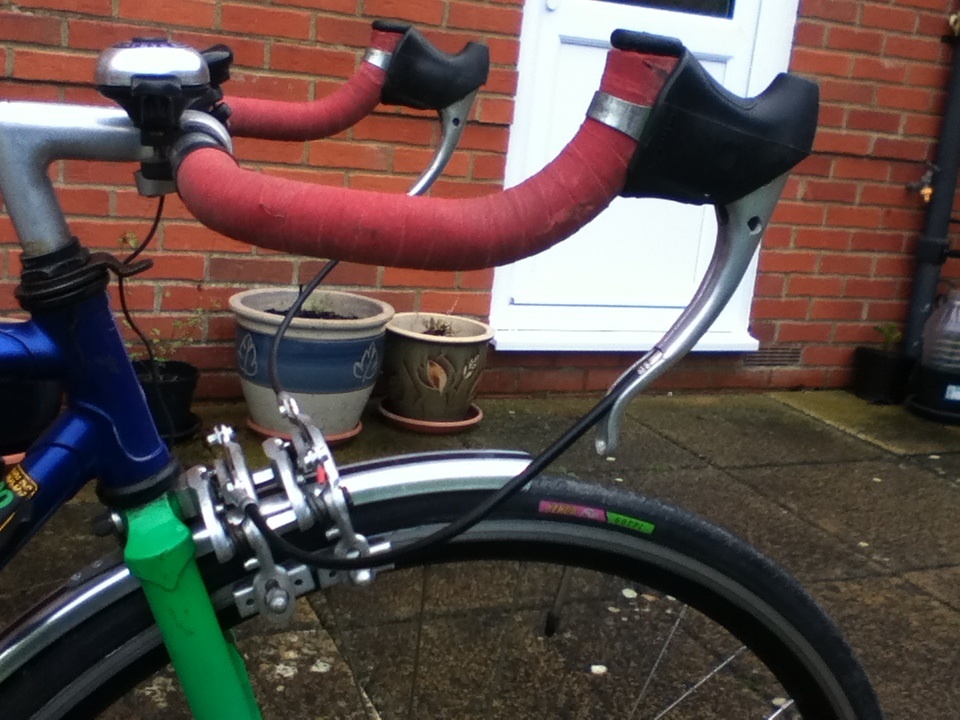 What's going on with the double calipers?

rjb wrote:Here's an alternative idea for using brake levers with bullbars. Old weinmann levers with the cable routing reversed. What I don't know is if the cable pull would be sufficient for V brakes.

Not with those levers, no.

I have the Tektro V brake levers. Diacompe is now called Cane Creek and the levers are identical to Tektro, except for some cosmetic differences and the higher price. The Tektro levers work great, but I find the width of the levers to be a bit wide for my liking.
Top

I use full sized v-brakes with old 9sp chorus ergos. They are hands down my favourite braking combination. Very powerful and really good modulation. A bit like good hydro discs it is easier to feel what's going and to modulate braking when you're only having to apply light pressure to get required power. To my surprise they have not needed cable adjustment significantly more often than my other rim braked bikes, despite living in a hilly city. I do have to run them with close rim clearance but I keep my rims pretty true and they don't rub. It was a very pleasant surprise to have them working as well as they do, after dismissing the possibility using v brakes with regular drop levers for many years as most people do.
Top

if you run with full -V's and standard pull levers there is always some combination of the following at work;

Re a) one of my bikes (which came from the factory with cantis fitted, which didn't work very well as a consequence) has non-standard boss positioning; brake blocks sit near the top of the slots in V brake arms, and standard pull levers (for DPs etc) work perfectly with full V brakes. NB variations in this dimension often go practically unnoticed; folk get terribly exercised about the difference between mini-Vs and full -Vs but there can be a much bigger difference in how the brakes work caused by small changes in boss height.

re b) you need very straight wheels (obviously) and rather less obviously the wheels and the frameset usually need to be stiffer than normal too. IME any bike/wheelset which rides pleasantly unladen (and isn't too heavy) is liable to be too flexible to run such clearances without rubbing.

So it might be interesting to hear which set of compromises you have. I would comment that a) works very well; if I were a cleverer chap I'd devise/advocate adjustable boss positioning so that brake system MA can be fine-tuned this way.

My Dawes 1-Down came with V brakes ( I recently changed them to Shimano DEORE T610s [ now discontinued it seems] with S70(c) blocks as the original were getting a bit lose) and Shimano RSX sti, using travel agents to adjust for cable pull. Works fine. I suppose my brakes are (b) in Bruceys list above
Top

My heavy tourer has had 287V levers with normal V brakes for years and it works very well.

My tandem has Campag Ergo levers with medium Vs. They feel good and stop well but regular brake adjustment and straight wheels are needed.

My light tourer also has Campag Ergo levers, with a Tektro 720 wide canti on the back and a Tektro medium V on the front. The canti is fine on the back but the original front canti was never powerful enough so I swapped it for a medium V. As with the tandem, wheels need to be straight and adjustment spot on, but I've just done a loaded tour in the Pyrenees and they didn't need touching, so they're not too finicky.
One link to your website is enough. G
Top

Pedersen Self Energising rear cantis are still available from SJS for a FIVER plus postage.
Good brakes, hassle-free. Seems the visually matching front brakes may have sold out, doesnt matter, its the rears that are extra powerful.
They used to demand £50 for these in the shop, or a fiver offov evilbay.
https://www.sjscycles.co.uk/brakes/0-su ... akes-rear/
Top

The bike I'm running v brakes with ergos on is an old aluminium Fort cyclo-cross bike. The pads are a bit lower than halfway down the slots so I don't think the bosses are unusually placed. The fork is steel and it's a stiff frame but not uncomfortable with fairly wide tyres. The stays are pretty chunky aluminium and they don't flex much. I do have to run my rims pretty true, and they are quite sturdy Mavic A319 36h, so they don't deflect much. This is the first bike I've actually tried v brakes with regular road levers on without travel adjusters, so I've just got lucky with the frame, wheels and combination I think.
Last edited by gregoryoftours on 8 Sep 2020, 11:10pm, edited 1 time in total.
Top

On a related note I came across these yesterday! Some of the weird and wonderful one-off designs of bike components are quite interesting. The regular v brake arm at the top of the picture is maybe one or two slots down from the top of the adjustable version. It looks like you could use almost any cable pull lever with these, if you really wanted to. 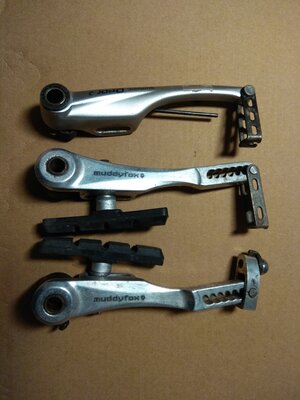 greyingbeard wrote:Pedersen Self Energising rear cantis are still available from SJS for a FIVER plus postage.
Good brakes, hassle-free. Seems the visually matching front brakes may have sold out, doesnt matter, its the rears that are extra powerful.
They used to demand £50 for these in the shop, or a fiver offov evilbay.
https://www.sjscycles.co.uk/brakes/0-su ... akes-rear/

I think SJSC bought the world supply 25 years ago and have been trying to get rid of them since!
Top
Post Reply
27 posts