Which Bike For Tour?

Which Bike For Tour?

Which of these bikes would be best for my upcoming tour? I will be riding about £1500 from Denmark to Belgium and all self supported.

I like the look of the Focus more and it looks like it would be a better around town bike too.

I will most likely ride with two rear Ortlieb back roller classics and a Radical Cyclone trailer so front racks isn't a bike problem.

I don't know much about the focus bike, but I have a 2008 ridgeback panorama world. I find it to be a great touring bike, comfortable,well balanced with panniers on ,a good spread of gears for all types of terrain, and with the exception of the saddle(in the process of changing) I couldn't find fault with it. I also like the drop bars, and the extra set of brakes levers on the top bars is very useful. fred
Top

Either would do the job. It comes down to what type of bike you want to get.

If it were me, I'd get the Panorama because I like classic touring bikes. The Panorama appears to be an excellent touring bike - no-one has said anything bad about it. I'd also get front panniers and do without the trailer so that I would have less resistance and could go faster. But you might prefer the mountain bike look and feel of the Focus, and a trailer. They're both well equipped and have more than low enough gears for any road you would encounter in that part of the world!

Whichever you get, enjoy the trip!
Top

I have a Ridgeback Voyage which is a cheaper version of the Panorama World. I think the Ridgeback would be more suitable than the Focus for the Denmark to Belgium tour. I used to have a flat bar Marin Fairfax Hybrid bike for my 20 mile daily commute to work, which I swapped on and off with the Ridgeback. After a couple of months I sold the Marin as I found the flat bar position more tiring.
Top

All good points and thanks for the comments.

At the moment the Focus is winning because it's about £300 cheaper! If I got the Panorama I wouldn't need the trailer maybe. Does a new Panorama come with a front rack as well as a rear? I ask as I have seen quite a few sites that show bike with front racks but say in the small print that it only has the rear one.

Another thing that draws me too the Focus is that I had a Focus Cayo road back a couple of years ago and it was a really well made bike. I doubt the Maleta would be any less well made.

The point about the flat bars is a good one. I think if I got the Focus I would get Butterfly bars. My brother has them on the bike he will be using and he says they are good. I have to admit I quite like the more "sporty look of the drops but I did read tha they are not too good if you have a bad back, which I do. Can anyone confirm this?
Top

HP Velo Fan wrote:At the moment the Focus is winning because it's about £300 cheaper!

In which case, why not consider the Ridgeback Voyage? Excellent bike. I loved mine.

Handlebars at the wrong height are bad for your back, whether they are drops, straight bars, comfort bars or whatever. There is a fixation in the industry in selling bikes with drop bars set very low, because it looks better / how the tour de france riders have them. On my Voyage I swapped the stem for one which brought the bars in and up by an inch - which made it perfect for me, but bike fitting is a very personal thing and you'd need to see what is right for you.
Top

Cerianly both the panama and the voyage are upto the job, with the panama being more suited for the extra long distance and extra heavy weight load. In the same way a rolls will do the same as a smart car in town sometimes people get carried away with buying the the best they can afford rather than will the cheaper bike do what I want and most of the time the cheaper bike will be more than sufficient and gives you money to enjoy the trip.

Same happens with motorcycles, the amount of people I've seen spend the most they can on an all singinmg all dancing bike then they can't afford to go anywhere and enjoy it.

as pointed out by others, money spent travelling a bit to look at bikes and get one that fits/suits you is probably the best money spent as an exspensive badly fitted bike will be a complete waste of your pennies..looks nice in the garage though
I have the lightest bike in the world....then I put my fattest body in the world on it...the only pounds that have been lost are from my bank account
Top

Another vote for the Panorama here. I've just bought a 2008 spec Panorama and managed to get it for £880. Might be worth shopping around to see if you can still get a 2008 one. They do come with front pannier racks. I've had mine 2 months and can't fault it. I've not ridden my other bikes since I bought it. The 2008 Panorama has an adjustable stem, so you can have the bars as high as you like. Touring bikes tend to come with the bars fairly high up anyway. When I test rode a Galaxy, I complained that the bars were too high!

Also worth considering is a Dawes Super Galaxy from Spa cycles. They were doing them at £920, if they have any 2008 ones left.
My JOGLE blog:
http://www.jogler2009.blogspot.com
twitter: @bikingtrev
Top

So the issue with the bars and bad backs is having them too low rather than just the fact that they are drops?

I am going to take a trip into Nottingham tomorrow and see if I can tes ride a Panorama. It's a pitty I can't test or even see one of the Focus bikes.

I have seen a Ridgeback Voyage and it did look nice. I have the money to buy something up to about £1200 and want a bike that will last for a good few years/tours. With that in mind would the extra money spent on a Panorama be money well spent?

Is that your 2008 model in these pics? http://www.patricktaylor.com/170 It looks very nice, I really like the colour.

Do you have any pics of it loaded by any chance?
Have a great time in Denmark. It's such an amazing country.

Where are you going?
Top

Is that your 2008 model in these pics? http://www.patricktaylor.com/170 It looks very nice, I really like the colour.

Do you have any pics of it loaded by any chance?
Have a great time in Denmark. It's such an amazing country.

Where are you going?

Yes, that's mine. Here's the bike again with four panniers but not the tent:
(click to enlarge) 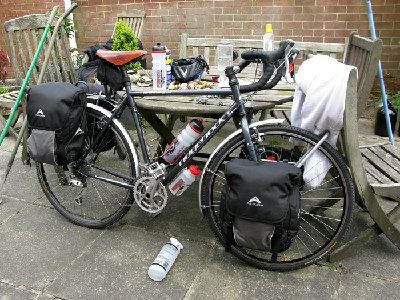 And thanks. I'm not sure where we're going exactly, except it will include Copenhagen (from Esbjerg) and lots of other nice places. My wife is the route planner and my only stipulation is about 50 miles per day on average please?

BTW I have my bars quite high. The 2008 model, as had been said, has an adjustable stem. And the top-mount brake levers are great.
My Website
Top

That looks like such a nice ride. I like the Brooks saddle too. I'll have to get me one of those.

Is there anything else on the bike that would need upgrading or is it pretty much fine straight off?

How about the Cannondale Touring Classic? I have heard that the chain can snap and a few other bad things about them but they were about 2006/7 spec bikes. Have they got it sorted with the 2008 or 09 ones, or would they be best avoided?
Top

It's fine straight off. I've done about 4,000 miles on it since last June. The only thing I didn't like was the Blackburn Low-Rider front racks. I replaced them with one with a hoop. That's it, I think - apart from the saddle which I switched in February.
My Website
Top

The only thing I've changed on mine is the saddle. The saddle that comes with the Panorama is OK (certainly better than the one which comes with a Dawes Galaxy), but I've put my trusty old Brooks B17 Standard on it. The Panorama saddle's gone on my winter bike.

I bought my Panorama from Freewheel in Nottingham.

Big T - I went to Freewheel in Nottingham this morning and all they had for touring(ish) bikes was a Specialized Tricross. Did you have to get them to order in the Panorama?

I did see a Ridgeback Voyage in Eveans and it looked quite nice to ne honest. I would still like to see a Panorama in the flesh so I can get an idea if the Panorama seems worth the extra money, which to be honest is quite a bit more.

Anyone know anything about Kona Sutras by the way?
Top
Post Reply
18 posts