I am looking to buy a touring bike and have done a lot of research, but still finding it hard to make my mind up. I have a budget of up to £1200 and two bikes I have seen that fit this are the Panaroma and the the Ultra Galaxy ( which is heavily reduced at Spa).
I have put the two relevant specs together in the attached image. (sorry didn't know how to make a table work in this forum.)
I like the fact that the Galaxy includes a B17 saddle as I was going to get one of these anyway. It also appears that the Galxy has a better spec.
I would be interested to hear people's thoughts on how the various components compare, or whether anyone has experience of trying out both bikes.
Thanks, Tim 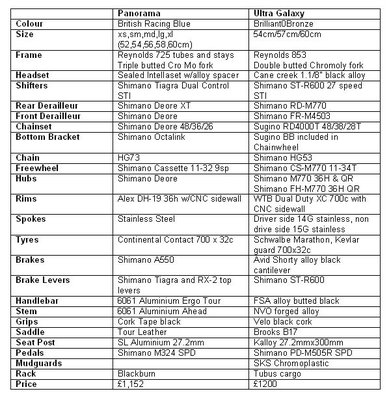 I don't think there's much to choose between them. I've got a Panorama, but I also test rode a Super Galaxy at Spa. When I bought mine, the deciding factor was price and the availaibility of the bike to work scheme. I got my Panorama for £880 and Spa were charging £945 for the Super Galaxy at the time, but they wanted to add the 12.5% that cyclescheme charge them onto the price, which would have made it £1063, so a no-brainer for me as my local dealer was happy to sell the Panorama for £880, even with Cyclescheme.

Looking at the specs, I'd probably go for the Ultra Galaxy because of the better saddle and the Tubus rack.
My JOGLE blog:
http://www.jogler2009.blogspot.com
twitter: @bikingtrev
Top

Agree with BigT, although i got to the opposite result.

I initially wanted a Panorama (having owned a Voyage previously) but couldn't find anyone who would sell it at the normal price (ie not the inflated list price of c.£1200 that no-one really pays!) on cyclescheme. Spa was willing to sell me a Super Galaxy for £800 + 10%, so I went with that, and have enjoyed owning the bike. (BigT, would be good to know which shop you were able to get that deal from on your Panorama).

Obviously what you ought to do is to test ride, or at least sit on, each to see which is the best fit. I believe the Dawes frame has a longer top tube, which may or may not suit.

I am sure that both are very capable tourers
Top

Both bikes seem to have a similar front trail. My experience of a heavily loaded Super Galaxy and also a Horizon with the same frame is that they not only relish front panniers but even benefit from them. Both should come with front racks (but don't?). Ridgeback has reduced the tyre size to 32, the same as the Dawes - maybe a bit on the slim side. I am hoping that the new Dawes frames have the same loaded ride qualities as the old (straight top tube) ones as the effect is amazing. Personally I would stick with the Dawes for this reason (sheer brand loyalty) but also remember that while you can easily change a couple of components you cannot as readily change the colour! (I know, I know, it isn't meant to matter - why don't they paint them pink then?). Brand loyalty may help a resale if required and one last point - it is nice to be be located near the dealer for that after sales service.
When the pestilence strikes from the East, go far and breathe the cold air deeply. Ignore the sage, stay not indoors. Ho Ri Zon 12th Century Chinese philosopher
Top

I must say that I'm surprised that the Dawes Ultra (the Ti model even!) seems to come with a cheap and cheerful Cane Creek headset - unless anyone can point to the contrary. It's nothing special - I fitted the very same one supplied by Dawes to a Galaxy frameset. It's one thing that I would expect to be a quality component for a £1200+ bike.
Top
Post Reply
5 posts • Page 1 of 1