I will be doing an long tour overseas - camping.

Also...
I have seen small motion activated alarms for a fiver on fleabay
Any experience of these? Not as the only security for my bike - but as a back up / deterrent.
2018 Ethiopia.5 weeks.
2018 Marrakech 2 weeks.
On a Thorn Raven/Rohloff hub.
Top

Lightweight portable locks do not offer any great level of security - they may be convenient to lock up your bike/bags for a quick toilet visit or whilst popping into a shop but they offer little protection against anyone with tools not much more than a Swiss Army Knife. The more robust 'Gold Standard' locks offer far more protection when used in conjunction with an immovable object but they are costly. However, the real price is the weight penalty of carrying them. Incidentally, many or most bike insurance policies have strict guidelines about the type of security device which must be deployed in order that the insurance is valid.

For my own part I carry nothing more than one of those coiled wire type of locks and this is merely to lock my bike for the aforementioned toilet or shopping breaks and I am always most circumspect as to where I would risk it. If I accompanied (which is usually the case) I would take turns to 'guard' the bikes whilst my companions shop etc.
Retired and loving it
Top

Any comments on key locks or combination?

My cheapo lock is key operated and I'm happy with that but with a combination lock there is no prospect of losing the key!
Retired and loving it
Top

My usual cycling requires quick security for village shops, and tea rooms/pubs with the bike in reasonable view. For that, and detering purely opportunist theft, I use combination locks, much less hassle than a key IMHO.

I have a range of combination coil locks of various sizes (and weights) that I chose depending on the ride I'm about to do.

I think £ for £ key locks are more secure though, so when in unknown places or with longer absence intended I ramp things up with a key D lock (as well as the combination(s))

No experience of the motion detection sort.

I do have a Datatag fitted on my best bike. Goodness knows if that's any good. Hopefully the 5% (my guess) of professional thieves it may deter are the 5% who take a look at my bike! Who knows.
Top

I've had two experiences with combination locks which have put me off them. The first was when the lock simply wouldn't unlock when it was being used. I don't know if the mechanisms are particularly prone to wearing out, but in my case I had to go to a local bike hire shop and borrow a hack saw to get through the cable to be able to carry on with the ride (three cheers to the bike hire place in Lyndhurst). In that case I was using a cheapish lightweight lock as I was carrying it in a small rucksack. The other problem I've faced with combination locks has been this winter. When water gets into them if the temperatures drop to sub zero they freeze solid, at least it's possible to heat a key to melt any ice that forms in a key lock. The only way I could unfreeze the combination padlock (not on a bike lock) was to pee on it which is not always going to be an option!

I don't care about the weight of the lock within reason. If there's room for it in my panniers I use the best I can afford. I have an Abus cable lock which is classed at the highest standard rating, and a Kryptonite cable for threading through to the front wheel, again of a high rating. These will stop all but the most serious bike thieves and that gives me great peace of mind. The weight of them is, according to my kitchen scales, is 1.1kg and that's small potatoes compared to my happiness. And anyway, it's the bike that carries the weight, I just pedal and enjoy the scenery.
Top

As Sheldon said, mini D lock, locked correctly on the back wheel
http://www.sheldonbrown.com/lock-strategy.html
Cables and chains are not very good, I think there's only one cable lock that is worth using - a big fat ABUS one.
Beware old style locks with a circular key - they can be picked far too easily.
If I had a baby elephant I would let it sleep in the garage in place of the car. If I had either a garage or a car. (I miss sigs about baby elephants)
Top

Maybe the best idea would be to carry a cable/chain and a D type lock I suspect the thieves would be equipped with bolt cutters or bottle jack, long bar but not all.

Good old Sheldon.
That link has this photograph and there's a caption that refers to his beloved frame.

It would have been better to have arranged the lock so it went under the chain, or through and up between the chainstays. 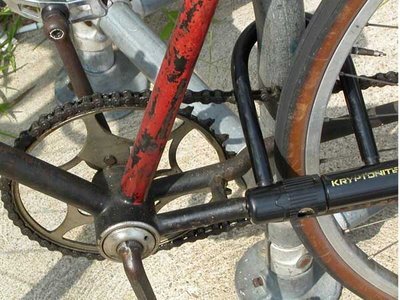 The cheapest 4-digit barrel combination locks can usually be picked in a minute or two, as I've demonstrated occasionally (for totally legitimate purposes, honest!) The amount of play in the mechanism means that, with a little practice, you can feel when each digit is lined up correctly.

On the other hand, most bike thieves go for the more brute-force approach these days. One advantage of combo locks is that you can share them with the family without everyone having to have their own key.
Top

Good point Mick F
Now I look at the picture I can see what you mean.
2018 Ethiopia.5 weeks.
2018 Marrakech 2 weeks.
On a Thorn Raven/Rohloff hub.
Top

Does look odd doesn't it? I always lock from the opposite side to the bike rack, through both seat stays and a handful of spokes, rack struts etc to fill the lock. IMO locking the frame in some way is essential (I also use security skewers to provide additional security for the wheels).
Top

One of the great things about cottered chainsets is the gaps are big enough for a d lock. You can secure the back wheel to the chainring, and lock it all to a lamp post. Try getting a bar inside that.
Top

Quote from the man himself
"Some will object that felons might cut the rear rim and tire to remove the lock. Believe me, this just doesn't happen in the real world. First, this would be a lot of work to steal a frame without a useable rear wheel, the most expensive part of a bike, after the frame. Second, cutting the rear rim is much harder than you might think. Since the rim is under substantial compression due to the tension on the spokes, it would pinch a hacksaw blade tight as soon as it cut partway through. Then there are the wire beads of the tire, also difficult to cut."
"Marriage is a wonderful invention; but then again so is the bicycle puncture repair kit." - Billy Connolly
Top

I think you're wrong in this instance - the wheel can't go backwards because the RHS of the frame would have to pass through the Dlock.

To remove the wheel it needs to be able to pass through the rear triangle, and I'm pretty sure that's impossible

A shortcut has to be a challenge, otherwise it would just be the way. No situation is so dire that panic cannot make it worse.
There are two kinds of people in this world: those can extrapolate from incomplete data.
Top
Post Reply
38 posts