I have the new CF Lollipop hitch. 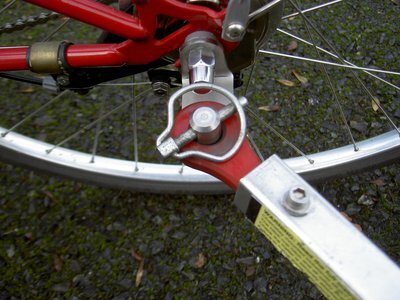 It's fantastic and a huge improvement on the old universal joint system.

However, there is a disadvantage.

When you are NOT towing, the hitch turns out to be an ankle biter. It juts out a couple of inches and takes no prisoners! Many is the time I've caught my ankle when wheeling the bike. I got to the situation that I would remove the hitch at the same time as removing the trailer. 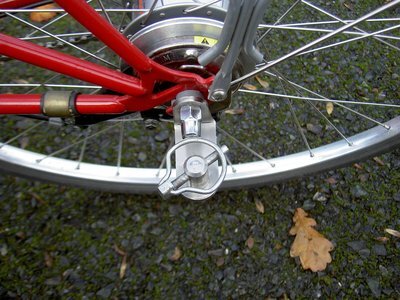 The old UJ hitch was smaller and more discreet, only poking out no further than the wheel nuts/QR so it could be left on the bike almost permanently. The new hitch is a problem!

To this end, my mate Paul made me this: 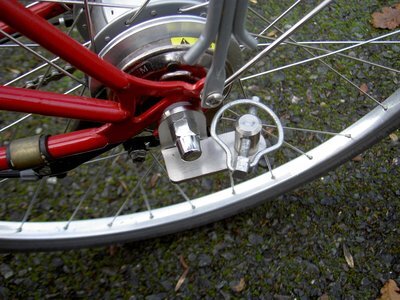 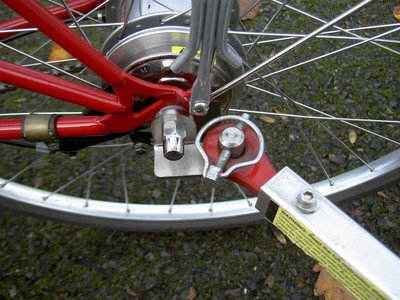 I've been in touch with CF and we've swapped a few emails and I've shown them my photographs. Nick Lobnitz of CF is very interested and is waiting for the results of my long-term trials. He suggests that there will be a turning force on the hitch making it "droop" at the rear. We're aware of this, and no doubt it will happen, but not yet. Time and miles will tell.

I have the idea that a lug could be fitted that slots into the dropout as a "stop" to stop the turning motion. Another design and trial beckons .......

I have 3 or 4 other hitches like mine.
Does anyone want one to trial?

Please get back to me if you want one, but you have to take off the existing post from the old one to transfer to the new one. It's only a nut to undo.
Mick F. Cornwall
Top

I'll give it a try Mick. Only local rides around London but should be enough to get an idea. I'll PM you with my details.
Top

This hitch is just a prototype, just an idea.

No charge, I'll post one to anyone who wants to try it out. All I ask is that you get back to me with any thoughts.

I have four - minus one for Toontra - leaves three more up for grabs.
Mick F. Cornwall
Top

I actually cut my hand open on the original lollipop hitch, quite a nasty cut. Although I should have removed it while working on the bike. The hitch really needs to be rounded off, sharply cut metal isn't good.

I'd like to try this mount. to avoid turning you just need to integrate some tabs to stop it turning by making it sit partially in the dropout. Although you need to cater for a few different angles and types.
Top

The turning problem is real. I only have the original u/j hitch, but the issue is similar.
My problem was that the standard hitch rotated about the q/r such that it put the u/j pin axis vertical, behind the hub axis rather than horizontal and below. I simply couldn't create sufficient clamping force to hold it in place.

My solution was to modify the brackets (using some stainless steel kindly sent f.o.c. by Nick at C/F, my MIG welder, some stainless wire, some argon, a few files and a grinder) to include a torque reaction anchor onto an otherwise unused threaded hole on the dropout. 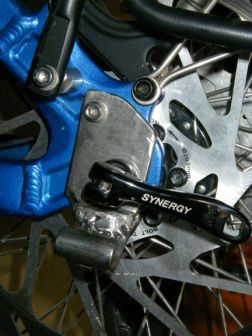 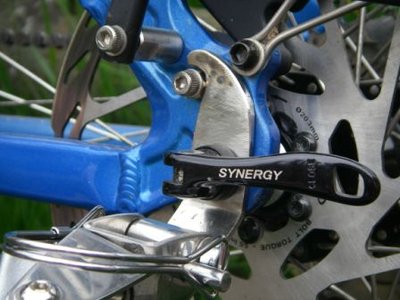 gilesjuk wrote:I actually cut my hand open on the original lollipop hitch, quite a nasty cut. Although I should have removed it while working on the bike. The hitch really needs to be rounded off, sharply cut metal isn't good.

I'd like to try this mount. to avoid turning you just need to integrate some tabs to stop it turning by making it sit partially in the dropout. Although you need to cater for a few different angles and types.

This prototype is also rough, feel free with a file if you want!

I envisage some sort of "key" at the back to fit inside the dropout. Two versions - parallel and vertical?

Just drop me a PM with your address, and I'll get it in the post to you.

I've gone ahead and bought one- lots of good feedback for the CFY!

I'd be happy to give your hitch an extended trial if you have any left! There's nothing like real experience of using stuff - product websites are ok, but they are there to promote their products after all.Thanks for taking the time and effort to help out! I'm quite excited about the idea of getting out with the trailer

Hi Andy,
Drop me a PM with your address and I'll pop one in a jiffy bag for you. No charge.

The bracket is just that - a bracket. You will have to take off the post and clevis pin from the original and transfer it. It's just a nut to undo.
Mick F. Cornwall
Top

I have to say that this hitch does look a bit clumsy when compared with that used on the "Extrawheel" Trailer. This uses a specially designed QR also but one with no chance of causing any damage to ones shins. It has a sprung yoke which can be adjusted to accommodate varying hub widths and I thought it very ingenious and very reliable in practice.
Have a look here.
http://www.extrawheel.com/en/3/voyager_trailer/
Scroll down and then magnify.
Top

I don't have a trailer at the moment but i am thinking about getting one again. I used to have a Mission trailer that had this massive clamp hitch arrangement that fitted to the rear triangle and a very stiff spring in the tow bar to provide required movement - alaways seemed to produce a funny sort pulsey pushing feel on the back wheel though I never had a problem with it. The other trailer I had was a Radical with a very discrete ball hitch on the rear axle nut and this handled very nicely indeed - you basically forgot it was there.
Top

Carry Freedom trailers look to be the best on two wheels. No complaints with my City trailer. Although it's had barely any use lately since getting an xtracycle.

Why get a good bike and then a rubbish trailer?

Finally made a decision at the weekend and ordered a CF small Y frame from Chain Reaction. Finally arrived today a bit after 4pm - so much for 48 hour express delivery. I had been expecting that it would come with the old universal joint not the new lollipop hitch which it did come with. I look forward to trying it out tomorrow and see how I get on with it. If you are still looking for guinea pigs for your modified bracket Mick F I will give it a try out. It has also croosed my mind as to how it would work to swap the hitch bolt to the other hole so it hangs down lower but doesn't stick out so far.
Top

WaterLab Rat wrote:It has also croosed my mind as to how it would work to swap the hitch bolt to the other hole so it hangs down lower but doesn't stick out so far.

That doesn't work.
The lollypop part has to big a diameter to fit on the plate if it's the other way around.
I know, I tried it out that way on my trailer.

WaterLab Rat wrote: If you are still looking for guinea pigs for your modified bracket Mick F I will give it a try out.

Just PM me with your address, and I'll post one to you.
Mick F. Cornwall
Top

Mick, How about going the other way?
Your prototype extends rearwards allowing the pin to be brought in towards the centreline, thus reducing protrusion.
I'm suggesting extending downwards, just far enough to allow the lollipop to fit between the top of the pin and the Q/r nut. As far as I can see, the pin should end up the same distance from the centreline as in your version. It would be below the axle, so the front end weight of the trailer would have no turning effect. Trailer inertia under hard braking would but this intermittent load might prove to be less of a problem than the constant weight.
Trying to retain enough fitness to grow old disgracefully... That hasn't changed!
Top
Post Reply
38 posts