That's a good idea.
Took me a minute to figure out what you meant, but yes. Good idea, but the lollipop needs clearance for rotation. This could be allowed for of course.

My lollipop hitch broke after 2000 miles. It had tipped up a couple of times and seen some intense use but it was still annoying and left us stranded in France for a week. Nick did send a replacement, including a new prototype, but as a warning, the hitch shown in Mick's photos are seriously flawed.
Top

Hi Graham,
Can you be more specific about your hitch please?

Was the breakage the stainless steel bit or the elastomer/plastic bit?
Mick F. Cornwall
Top

Graham - please tell! I pull 80 grand's worth of kit in mine and thus need to have some faith in the elastomer hitch.

Today our second trailer tipped over in a kerb-pedestrian-related incident, and it was a joy to be able to right it again with no problems. With the old metal hitches that would have been a horrorshow, and a new hitch.
Last edited by speedsixdave on 4 Feb 2011, 9:25am, edited 1 time in total.
Big wheels good, small wheels better.
Two saddles best!
Top

I had tipped the trailer a couple of times before it snapped.
The trailer was fully loaded with camping gear and I think one of the trailer wheels went into the long narrow crack type potholes you get with joints in tarmac as I turned at a juntion.
The resulting twisting force as the wheel snagged snapped the elastomer in two.
When I ran Nick about it, he said some of the early elasomers may have the odd very small air bubble in them which can weaken them.
The later ones are made differently, so will/should not suffer the same problem.

Saying that, I snapped the old syle universal joint hitch as well.
The bolt which held the two halfs together snapped in two due to metal fatigue.

I now run the hitch with a double elastomer on it.
I just run a bolt, with a sleeve on to make the correct diameter, down through both elastomer into the metal plate.
I means I cannot unhitch quite so quickly, but theres only half the load on each elastomer so it should be twice as strong.

I've just bought a Y-large with lollipop hitch and would gladly trial one of your modified brackets if you still have any left.

DaveP's suggestion of protruding downwards from the axle sounds interesting. If only I had the skills and equipment to fashion such items myself.

Thanks to everyone for sharing their hitch horror stories, at least I know what to expect

Hi Tim,
Just send me a PM with your address, and I'll post one to you.
Mick F. Cornwall
Top

Tim has the last one, so sorry if anyone else wants one, there ain't no more left.

However, if I get positive comments from folk, we can go into production.

could you please tell me what steel your friend used for the modified hitch? 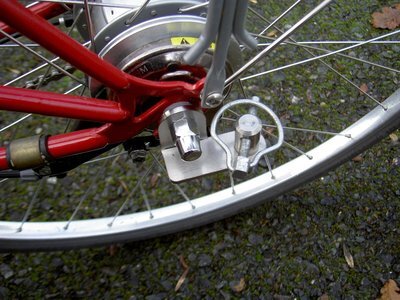 Thank you very much.
Top

The securing post is the original as it's only held in position by a ny-lock nut.
Mick F. Cornwall
Top

So how has the improved hitch behaved Mick? Any 'droop' or other movement to report? And looking at the picture above, is that a washer of some sort between the hitch and dropout?

I now have a Carry Freedom too

The washer is the Shimano Nexus 8sp anti-turn washer.

No, nothing drooped.
It was used JOGLE with my Raleigh Chopper, and also on my trip to the Yorkshire Dales and back on Mercian. I'm not a light tourer with my trailer ............. what's the point of having a nice big alu box if you can't take the kitchen sink.

It's also towed a concrete block or two.

CF are aware of this design but he steered away from production due to slippage. I understand fully why he doesn't produce them because he needs to guarantee the operation of the hitch.

My mate isn't in a position any more to produce these as easily as he did.
Anyone remember the headset spanners?

I have a couple of jobs for him that he's had the details of for some months, but I don't see him as much as I used to and he's a very busy chap. My jobs must be on his back-burner.
Mick F. Cornwall
Top

No, it didn't do JOGLE with my Chopper, I had the original one on then.

Thanks for the update Mick. What do you mean by 'slippage'? It doesn't mean the hitch drooped, does it?
Top

Yes.
The chap at CF suggested that although the "bent backwards" hitch is more user-friendly and less likely to bite your ankles, he thought that the nose-weight of the trailer may press downwards and turn the hitch clockwise. Also anti-clockwise if you have negative nose-weight.

I found that I tend to adjust the load so there's neutral nose-weight, so the only load would be the pull from towing. I suppose in the Real World, it's not possible to have neutral nose-weight 100% of the time, hence the reason that CF don't do it like that.
Mick F. Cornwall
Top
Post Reply
38 posts