Hi Folks, once again I shall appeal to the wisdom of the crowd! (Search performed but sadly only a single old thread not of any use)
Just taken delivery of a lovely Ridgeback Panorama (http://www.ridgeback.co.uk/bike/panorama) fitted with Blackburn EX-2 Expedition Rack to the rear and Blackburn Custom Lowrider Racks to the front (exactly as in the picture). I also have Ortlieb Roller Classic Panniers for both Front & Rear.
The Rear Ortliebs fit the rack perfectly, no problem whatsoever. The Fronts however are a different matter. It's possible to get the Ortliebs latches to engage with the upper horizontal tube of the Custom Lowriders but I can't get the lower "peg" or "hook" on the Ortliebs to engage with the rack at all in a secure way....the rattling will drive me nuts!

Enquiries with Ortlieb & Blackburn have so far failed to produce a response.

I can't believe I am the first person to have met this challenge...any ideas?

As always, all responses gratefully received...thanks in advance...

Hi,
I have the ridgeback panorama with the same racks as yours. I also have the ortlieb roller classics which I found easy enough to fit, however the front ones do take a bit more time to get the bottom clip right. I think most panniers rattle slightly when empty, but I found no problems when loaded. Overall a great touring bike, and the panniers are excellent especially in wet weather. Hope you have many long and happy tours.

Thanks for your reply. You may have a point about a slight rattle when empty. Another fellow tourer has suggested a clever use of a short bungee cord. I'm slightly nervous about bungees (or anything else for that matter) near the front wheel but I'll see what his idea is.
Certainly agree about the bike though. I was very impressed when I bought it and now even more so a few miles in.
Thanks again

For a bit of extra security, you can get these straps for your Classic Rollers, they fit as shown in the following photo and the hook at the bottom hooks over the bottom rail of your rack.
Your Front Rollers may not be of the same design with the appropriate buckle though, these are about eight years old. 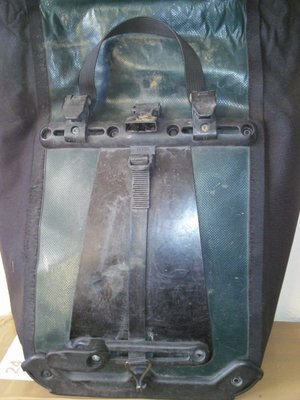 My wife and I also own a Ridgeback Panoramas, which I bought back in 2008. They have the same Blackburn racks but I took off the front Lowriders as soon as I got the bikes home as I wasn't intending to ever use them. So far all of our full camping touring has been done with just rear panniers and I can confirm that the Ortlieb Classic Rollers do fit well on the Blackburn EX2. (I've had some problems trying to get a reasonable set up for a rear light on the EX2 for which I recently created a topic on Bikes & Bits which might be worth a look Stevewheel)

However, that said, we've decided that we need some more storage space for the longer trips and to that end I recently purchased one set of Ortlieb's front classic rollers which I've stashed in the attic ready for use on my bike next year. My intention had been to re-fit my Lowriders before the first trip and I was assuming that the new front Ortliebs would click straight on as per the rear ones, but you've got be worrying now Stevewheel because I've never actually tried to see if they fit.

If the Blackburn Custom Lowriders aren't fully compatable with Ortlieb panniers, and faffing with bungees and clips etc is the only option, it tends to ruin the quick and easy clip on-clip off qualities of the Ortliebs that I've become used to on the rear. I think I'd rather go with something more compatable. When travelling down to the south of France we do a lot of hopping on and off trains through the busy cities of Paris and Lille. Sometimes it's frantic what with tight connection times and you really haven't got time to mess about. That's where the Ortliebs we've been using on the rear of our Panoramas have been brilliant - Panniers off on the platform in an instant, bikes on train, panniers on train in luggage rack, bums in seats and away we go without so much as a cross look from the easily upset train guard.

Therefore, can anyone out there with Ortliebs on the front recommend an alternative compatable system to the Blackburn Lowriders?

Thanks Fred. So the shark's tooth at the bottom of the pannier does engage with the rack then, once adjusted?
Top

It is supposed to Franckster but that's the bit I am nervous about. The engagement is very slight and I think it's going to rattle like mad & drive me nuts!
Top

steve and others,
the issue is the ortlieb classic panniers do fit the blackburn low riders with the top rail clamps, unfortunately the bottom hook/finger is not long enough to engage the frame securely.
to overcome this problem remove the pannier racks and using gentle hand force open out the top single arm, then by placing a screw driver (biro pen diameter) at the weld nip gentle create a slight bend.
this will allow the front clamp, once adjusted, to move further along the pannier rack.

once the racks are reattached the front pannier with the top clamps adjusted so that the bottom hook/finger ,in the horizontal, reaches the outer pannier frame securely.

this was demonstrated to me by a wise cyclist,