can anybody tell me what the expected life of the brake shoes is ? Mine has done just short of 2000 miles and the shoes have started to grab quite severely (I'd say they were self servo assisted). When I pull the front brake at walking pace, the bike stops dead - and I mean dead enough to lift the back wheel so as you can imagine, I'm a bit reluctant to use them at 30+mph on fast downhills on wet roads

Once the brake is locked, I can undo it by pulling the lever hard and letting it fly back a couple of times or I can get off and push the fulcrum back to normal. When it happened today, I was at traffic lights and had to de-clip and rock the bike back and forth to free them.

I thought the problem was due to general neglect so I serviced them a couple of weeks ago and greased the pivots and the cam shaft and it did seem to improve the situation, however it's gone back to its old tricks today and the camshaft seems a bit stiff too and is reluctant to return so it may need re-servicing. I've checked the cable and that moves freely - lubricated it with PTFE spray instead of grease because that was too thick in the cold and causing lots of drag.

Annoyingly, I was just thinking that the brakes were starting to bed in

I have been waiting for somebody who really knows these brakes to reply, but they havn't!
My experience is from years back, on motor bikes.
Hub brake leading shoes wear faster than the trailing shoe http://forum.ctc.org.uk/viewtopic.php?f=5&t=42025&hilit=+leading+shoe
There is some "float" somewhere so the brake self-centres to accommodate this uneven wear.
I think you will be OK if you can get the brake cam and its associated lever to operate smoothly, and check you have some float somewhere (either the cam or the pivot the other end of the shoes float in the brake plate, or the brake plate floats on the spindle)
Bike fitting D.I.Y. .....http://wheel-easy.org.uk/wp-content/uploads/bike-set-up-2017a.pdf
Tracks in the Dales etc...http://www.flickr.com/photos/52358536@N06/collections/
Top

Used to get this on my moped with a very similar design to the Sturmey. My cure was to chamfer the leading edge of the shoes which worked a treat. Can't see any good reason why it shouldn't work on a X-FDD.
Top

Individual spares seem to be non-existent for this hub - SJS Cycles do the whole brake plate with torque arm and shoes fitted for £38, they also do a 'service' kit for £24 which is just the shoes, spring, cam, washers and starlock.

I don't want to go that route just yet. I'll strip it again at the weekend and try swapping the shoes over so the leading and trailing edges are swapped and see how that goes.
Top

do you know of this shop?

and please do keep us informed, with pics please.

and please do keep us informed, with pics please.

I had seen OBT a while ago and forgot about him. Anyway I decided to give him a try and all I can say is "What a gent". Very helpful and knowledgeable, I ended up buying a X-RD5(W) 5 speed hub) as well as a 70mm brake service kit. I was going to buy the hub from SJS but figured that OBT was more than worthy of my business

If you could buy nostalgia, it would come in a box like this :- 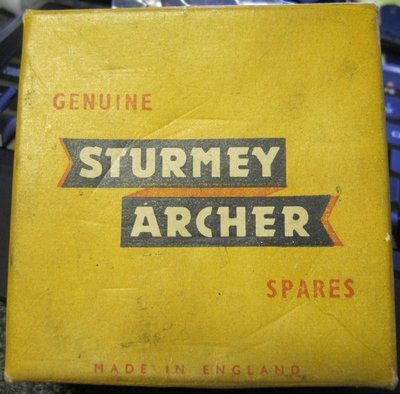 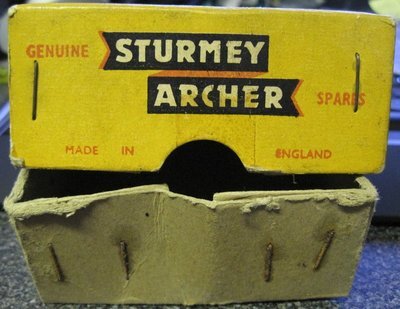 I've got some pics & other stuff to upload but it's way past my bedtime.

as a final followup, the brakes are now working fine. I don't think that the problem was wholly due to worn shoes, however I fitted a new pair of shoes just in case and when they are worn out, I'll try fitting the old shoes again.

I ordered the shoes from Old Bike Trader and the part number didn't match the current parts list from SA however the shoes were suitable. The main difference betwen the old and new shoes is the thickness of the actuator cam - you need to replace the shoes with the cam as a set. The new cam is slightly shorter so you don't need the thick spacer washer.

I had serviced the brake about 150 miles ago - before the snow and the winter gritting started. I'd serviced it because the brake had started to lock on. I removed the brake plate and removed the cam so I could clean and lubricate its faces and bearing shaft. Due to the construction of the brake, it's difficult to remove the cam without damaging the pivot starlock washer so I removed the cam by rotating it by 90° then opening the shoes a bit more by using a carefully selected nut and bolt as a jack. I was then able to remove the cam and clean it up. It was stiff in the housing and after cleaning and greasing, I released the shoes and found the mechanism much better and the brake worked fine.

I think that my service above was a major factor in my brake problems because it over-stressed the the shoe return spring. When I compared the old shoe spring with the new one, the old spring was a lot more powerful. The area of the spring was the same but the distance between its jaws was different suggesting that I'd stretched it beyond its limit. After riding in the snow and getting hit with road salt etc. the cam and pivots started to seize up and the return spring didn't have enough force to pull the shoes back away from the drum so the brakes were sticking on.

I still don't think they have worn very much - but watch this space for when I have similar problems.

Anyway, back to the service. Below is a pic of the new shoes (I also ordered a spare starlock just in case) :- 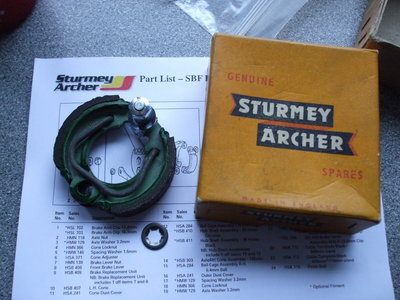 After removing the brake plate, I was surprised at how badly corroded the inside of the drum was - there was a lot of aluminium rust in the drum and on the shoes/mechanism. The pic below is after I had given it a clean - believe it or not, the hub was shiny not too long ago - the winter salts have really take a toll on it :- 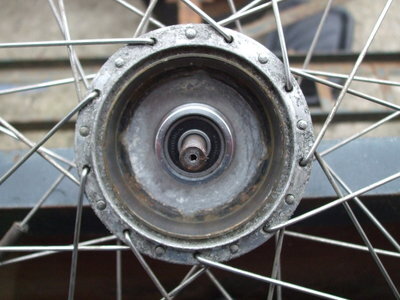 To remove the old shoes, you need to remove the old starlock on the pivot. If you are lucky, it will come of in one piece, if not it will break and you will have to use a new one. I'd advise safety goggles at this point. I couldn't lever the starlock off so I used a screwdriver and tapped it with a hammer. This got the washer off but it pinged a great distance. If you don't have eye protection, cover the washer and screwdriver blade with a piece of rag to absorb the energy :- 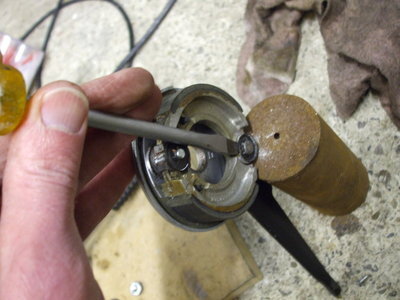 Removing the starlock from the pivot

You should be able to remove the shoes from the pivot and plate now. Mine were corroded on and took a bit of levering with a screwdriver to get them off. I didn't use any release oil because I wanted to see what was underneath, YMMV :- 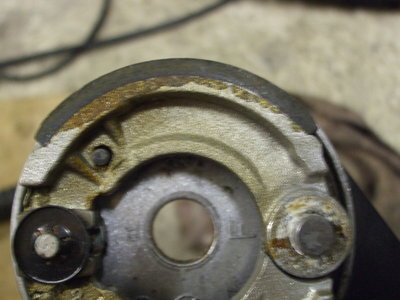 after I had removed the shoes, the pivot looked like this :- 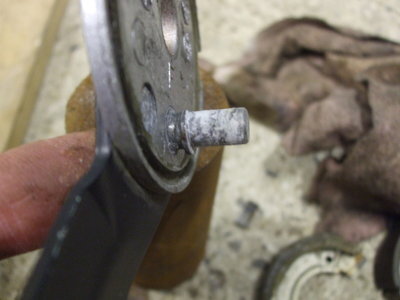 Everything was cleaned down - use a wire brush, wire wool and fine emery to clean the surfaces then re-assemble.
Top

For assembly, I greased the pivot, removed the cam and greased its bearing surfaces and spindle (taking care NOT to strain the spring) , the faces between the shoe pivots and the face where the starlock fits. These were all greased with a copper based grease :- 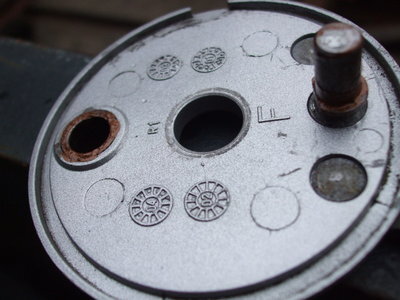 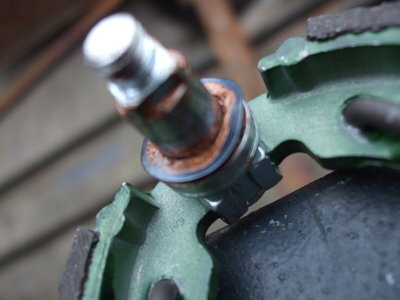 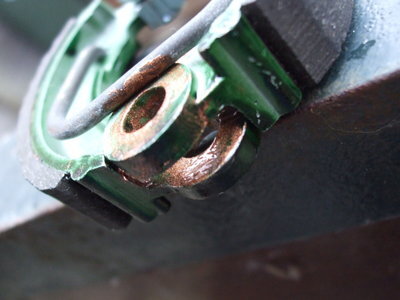 finally, fit the starlock - use a small socket spanner for this, take care not to press it too hard, it wants to just touch the surface of the shoe body :- 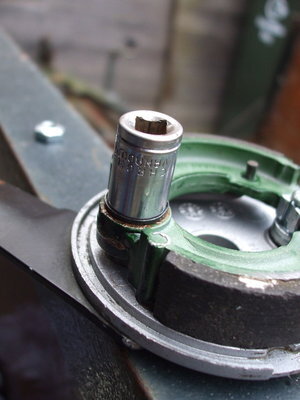 Using a socket to replace the starlock

I was able to get the washer on using thumb pressure alone.

Finally, re-assemble the brakeplate into the hub and refit to the bike and cable up.

The brake is now starting to work well though it will take several miles to bed in fully - it won't tip me over the handlebars and it's not as good as high power v-braks but it's more than adequate for commuting.

If you are going to simply service the brake yourself without replacing the shoes, you should only need a starlock washer, a bit of time, some copper grease, and a few basic tools.

The pivot shaft measures 7.84mm - which is very close to 5/16". Old Bike Trader supplies starlock washers or you can get them from Ebay, look for starlock and you want either 5/16" or 8mm. I'd recommend replacing the washer every time.
Top

Very interesting, thanks for that. I've always wondered what they're like inside, I'm contemplating building a SA hub geared and drum braked all weather commuter at some point as I like the idea of everything being enclosed.

Do you (or anyone else) have any experience of the coaster brakes in the rear hubs? I just wondered how they compared to a standard rim brake and whether they're adequate enough combined with a front drum?
Top

Trigger wrote:Do you (or anyone else) have any experience of the coaster brakes in the rear hubs? I just wondered how they compared to a standard rim brake and whether they're adequate enough combined with a front drum?

Not the coaster brake but I'll be building a 5 speed with drum brake rear - hopefully this week. It will be replacing a cheap and tatty rim V braked rear wheel. I must admit to having an over powered rear brake so it will be interesting to see how good/bad a rear hub is - especially as I've been relying on the rear brake a lot while trying to get the front hub brake bedded in.

I'm sure HGF will give more pertinent advice.

Trigger wrote:Do you (or anyone else) have any experience of the coaster brakes in the rear hubs?

i have. once you're used to it, you'll wonder why all bikes aren't equipped with one

Cool, what's it like power wise? I know you don't rely on the rear for all out stopping power but is it enough combined with a drum front? (I have no experience of those either

enough to lock the rear with no front.. ie. more than enough

Thanks for this most helpful post, Grahm I found this board when searching for this info, and used it to fix my sticking brake. It is now working better than when new! Like you, I initially exacerbated the problem by trying to disassemble the brake without removing the star washer. I was able to bend the spring with a pair of channel-lock pliers (not sure what they are called on your side of the pond...these: http://www.northerntool.com/images/prod ... 888_lg.jpg ) and restore tension. Here are some notes others may find helpful:

After removing the star washer on the pivot, the top shoe will come off the pivot. Slide that shoe down off and past the cam which will de-tension the spring. Then you can easily remove the other shoe. Reverse this to re-assemble. When re-assembling, leave the cam followers off the shoes intially, which will help avoid over stretching the spring. After the shoes are in position and the star washer is installed, you can carefully slip the cam followers into place, and lube the camming surfaces. I lubed the cam shaft bearing with my favorite Phil Wood waterproof bicycle grease. On the pivot and cam surfaces I sparingly used Hondalube-60. This is a 60% molybdenum-disulphide extreme pressure grease available from Honda motorcycle shops...perfect for brakes and splined shafts. Very low migration and still provides low friction after it eventually dries out. I also used a tiny dab of the HL60 on the ends of the spring...likely pointless, but can't hurt.
Top
Post Reply
17 posts