For discussions about bikes and equipment.
Post Reply
105 posts

Mick F wrote: You can see that the cheaper wheels went further! (albeit only half a wheel revolution further)

I started reading this thread with a gut feeling that different wind resistance, as a result of different riding postures, could be as significant as different rolling resistance.

I then went to CJ's calculator. Mick, you suggested you may have topped at 5 mph. At that speed, wind resistance, with a drag coefficient of 1 and a frontal area of 0.5 square meters, would be 3.6 watts. Rolling resistance, however, with a coefficient of 0.006 and a mass of 100 kg, would be 13.7 watts.

So I concluded that wind resistance was indeed, as you had claimed and contrary to my instinct, likely to be small compared to rolling resistance.

Mick F wrote:Watch this movie of me on a Raleigh Chopper.
http://www.youtube.com/watch?v=JP_3OfVQjF0

Oh man, you actually wear lycra on a Chopper
nuns, no sense of humour
Top

Mick F wrote:Any road up, less than a metre difference in 65 metres. Hardly much at all.

and also, gven that you'e only done 5 runs on each, not even statistically relevant

No not relevant at all.
All I did was change wheels and not a ha'porth of difference.
Therefore wheels are a red herring?

Anyway, Edwards has sent me a pair of 25mm Nutracks. I say 25mm, but as soon as I saw them they didn't look much difference to the 23mm I used to have. I fitted them and inflated them, then measured them.

Here's a couple of close-ups of my cheapo calipers: 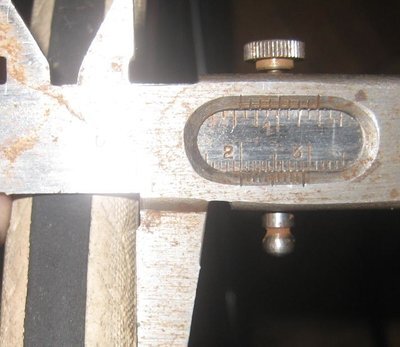 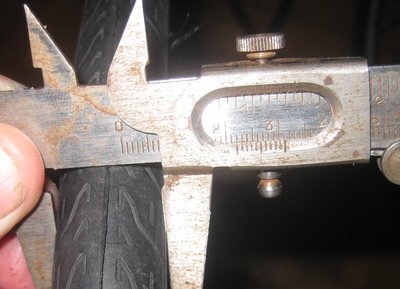 As you can see, my white-walled Vittoria tyres are 20mm as stated, but the 25mm tyres are only 22mm.

I'll be out and do another test tomorrow. I've fitted the Nutracks on my spare wheels - Mavic MA3/Mirage - and roll out again. I'll do the same route I did today and call in at the station on my way home. Obviously I'll be in cycling gear.
Mick F. Cornwall
Top

Mick F wrote:NoAs you can see, my white-walled Vittoria tyres are 20mm as stated, but the 25mm tyres are only 22mm.

Ha! Not Contis are they? I recently bought a "32-406" CityContact that came up narrower than a 28-406 Sport Contact (which does measure around 28mm)

Mick F wrote:Vittoria tyres are 20mm as stated, but the 25mm tyres are only 22mm.

squeaker wrote: I recently bought a "32-406" CityContact that came up narrower than a 28-406 Sport Contact (which does measure around 28mm)

this is worth a whole thread, imo. i've got 28-622 michelins at 30mm, and ime contis are always slimmer than stated
http://graham.hopto.org/tctforum/index. ... fferedby=8
Top

Mick F wrote:No not relevant at all.
Therefore wheels are a red herring?

that's not what i meant. wheels may make a difference, but you'll not know from 5 runs.

ask in the pub this afternoon how much everyone drinks in a week, or their age, or their weight. if you ask 5 (or 500) folks, it won't be a proper sample that's representative of the population.

if you did over a 1000 runs on every tyre and wheel and clothing and wet/dry combination, and did it blind, then you get something relevant

No Hubbers, I don't agree with you.

I rolled out five times and each one came in within a yard of the others. I could do a million runs and they would all come out within the same yard.

If the distances were not coherent - ie all over the place, I would keep doing them until I got consensus. The fact that five out of five agreed reasonably with each other was enough. Notice I did six with RSW16 because the results weren't coherent. Maybe I should have done ten, but the test for the RSW16 was more fun than anything - and it was getting better as the test went through. I thought that the Chopper was a beast, but the RSW16 was awful.

The purpose of the whole thing is to demonstrate that different bikes roll differently. I know we all know this, but it's good to have a visual representation. The figures and method wouldn't stand up to scientific analysis, but so what? The demonstration worked well.

Now, all I want to do is to try different tyres on the same bike and wheels. Tomorrow I will show you some more chalk marks. If it takes ten or twenty or even thirty runs to get a coherent group - so be it. I doubt I'll have to do more than five, but we'll see.

Anyone want to predict how the Nutraks will do compared to my Vittorias?
Mick F. Cornwall
Top

Conduct a t-test to see if the mean stopping distances for each bike are statistically diffrent from each other (on Excel, mintab, SPSS or some other basic stats programme). Five replicates for each bike, providing the standard deviation isn't massive (which it probably won't be based on your pics), is fine.

The easiest thing would be to download StatPlus trial version (available at analystsoft.com) as it's very user friendly.

Doing the test blind wouldn't make any difference. Knowing which bike you're on is very unlikely bias the tests.
Top

Mick F wrote:I rolled out five times and each one came in within a yard of the others. I could do a million runs and they would all come out within the same yard.

Statistically that's rather unlikely, but I suspect that you don't really want to do enough runs to prove it one way or the other

As you say, your tests may not be strictly scientific, but we're (well I am) loving it - keep up the good work

herzog beat me to it, you need to compare the means using a t-test. This is an easy site to use:

I nearly hit the kerb on that video run.

I was looking at the camera viewfinder rather than concentrating!

I might add that there were a few aborted runs. Runs like when I didn't have my RH pedal at the bottom so MAY have turned the pedal whilst starting off. There were another one or two where I had to avoid a car coming in to the carpark and deviate off the track, but I can assure everyone that the runs I recorded were unadulterated.
Mick F. Cornwall
Top

It would be interesting if each tyre size were tested at different pressures too.

Go for it Mick

1+ Indeed, pumping up to optimum pressure (which could be as controversial as this thread) for each tyre size is vital as well, to be able to benefit from lack of bump losses (in the case of wider lower pressured tyres of course). Otherwise I doubt wide tyres will have any advantage at all in terms of speed. I mean if you pump all rear tyres you test to say 120psi regardless of their width then they will bump equally badly... Same goes for the front of course.

Mick, a test at the recommended optimum pressure in above article, for each width, would be interesting.
For example if you are pumping your rear 20mm tyre up to 130psi, only 90psi should be enough for a 25mm rear tyre and so on. Same applies to front tyre (a much lower pressure should be enough)

Copied over from previous thred..
Mick,
Can you also follow this optimum tyre pressure guidance as in the Tire Drop article (from bicycle quarterly web site):
http://www.bikequarterly.com/images/TireDrop.pdf

For this you will need to carefully measure load on rear tyre and front one separately (using an analogue bath scale) while you are sitting at your usual riding position. Then inflate your tyres using the chart there. I am really curious to validate the article above with controlled experiments of my own. They did empirical studies just like you do to create that chart. What bicycle quarterly folks claim is that for equivalent quality/weight, wide tyres perform better than skinny ones (another article to which I don't have a link!). The reason is a practical one: narrow ones can't be pumped up to optimum pressure for everyday ride. Because you'd get pinch flats around those pressures. But you can forget about pinch flats for the sake of this experiment and follow the chart above. Your test is done on even surface isn't it? No harm should be done for such a short distance.

So I am genuinely interested in testing the same bike at different pressures (or seeing this done by some one else like yourself). First do this at the pressure you always use. And then repeat at the pressure recommended for your weight distribution.

The idea is the bump losses are minimised at optimum pressure and wheels roll better.

Just to comment that the width of the tyre as reported by MickF above depends on the width of the rim as well as the structure of the tyre. I always believed that the ERTO rating on the tyre referred to its height (and thus the wheel diameter), not its width. Am I wrong? Of course, the two are related as the cross section of the tyre/rim combination will tend towards a circle when under pressure.
Top
Post Reply
105 posts