Removed the sprockets and free hub on my 2003 Chorus 9 speed rear wheel this afternoon to investigate why the sprockets were "floating" around.

Can you replace and reassemble these or would it be easier to replace the complete free hub?

Many Thanks Tom
Top

It is fully servicable. Go to the 2003 pages on this website http://www.campagnolo.com/jsp/en/doc/doccatid_3.jsp and you will see exploded diagrams of how it all goes together.
Top

Agree.
Pull it apart and see what you need.
Mercian Cycles are a good source of Campag spare parts. 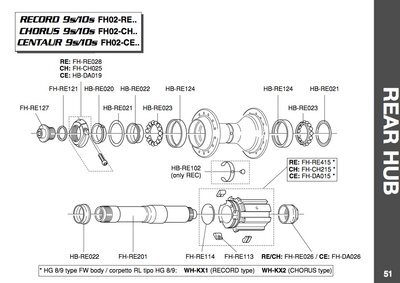 To pull it off, you need an Allen key and a 15mm spanner.

For the unitiated:
Take the wheel off and remove the skewer. Remove the cassette.
Stick one Allen key in the non-drive side and undo the nut on the drive side. LH thread!
The freewheel assembly just slides off the axle.

The freewheel assembly has a couple of ball races pressed in, and the new unit comes complete with the bearings.
Mick F. Cornwall
Top

Removed the sprockets and free hub but the outer (tiny) bearings are now all over the garage floor.
Brought a complete free hub but I'm guessing this is from a later model as the diameter of my 2003 axel is too large.

I have the campag exploded view catalog but no reference to the free hub components.

Will try Mercian unless you have any other ideas.

It will be a shame to replace this as its runs really well having followed any earlier post regarding changing bearings.

Hi Tom.
The freewheel assembly (that the cogs fit on) has sealed-for-life bearings that are a press-fit inside it. As far as I'm aware, you can't get them out - well I've never tried!

Are you suggesting that the ball bearings have come from the hub? or have the freewheel assembly bearings failed?

If the latter, all you need is a new assembly FH-CH215.

Your 2003 Chorus hub is identical to mine, and the axles are like that to the present day. If you bought the correct freewheel assembly, it should fit.
Mick F. Cornwall
Top

The Chorus 2003 alluminum axel is larger in diameter than my 2007 Centaur hub and is too big for the replacement freehub.

The 2007 and replacment freehubs include what look like better designed "sealed" bearings.

The 2003 freehub has a composite (outer) bearing carrier for "tiny" bearings that are now scattered across the garage floor.

The free hub exploded view in the Campagnolo spares catalogue is very limited, lets hope I can get it all back together again.

The Chorus rear hub I showed up-thread is of the 2003 hub. It is identical to mine - 2006 - and the axles are identical RE-201 from 2003 to the present day - but only Record are available now, but Chorus and Record are identical anyway.

Looking at my copy of the campagnolo catalogue the hub which I believe to be Chorus 2003 has axel FH-RE201 and freehub FH-CH215 whereas the 2007 Centaur hub has an axel which looks like FH-MI001 shown as Veloce/Mirage. The components shown in the catalogue do look like what I have and I did buy the bits in 2003 and 2007, but who knows I may have it wrong.

Managed to get hold of a 2007 Veloce rear hub, do you know what type of bearings these use?

They look like cartridge bearings which is what is in the catalogue, removed one end and knocked the axel through but not sure how to remove/regrease the bearings.

Managed to get hold of a 2007 Veloce rear hub, do you know what type of bearings these use?

They look like cartridge bearings which is what is in the catalogue, removed one end and knocked the axel through but not sure how to remove/regrease the bearings.

I think the Veloce hub is similar to the Mirage ones which have been around for a few years. I fetched mine apart to replace the bearings several times (roughly once a year, in the middle of winter, following a couple of very noisy commutes!).
From what I remember, once you have removed the axle you need to drift out the bearings. There is a steel spacer between them - you need to push it aside slightly so that your drift can sit on the bearing. Just make sure you note exactly how the bits fit together before the first bearing drops out of the hub! You might well damage one of the bearings beyond repair (if it isn't already) as your drift will be hitting its centre and not its rim. However they are standard items and pretty cheap, so once you have got this far you might prefer to replace them anyway. The second bearing is easier to remove because once you have removed the spacer you can get full access to it.
I could be wrong here, but I seem to remember fiddling about with the positioning of the bearing/s and or spacer/s (there are some in between the hub and freehub bearings), so I would advise having a good look at everything before you take a mallet to it!
Top

After 2006, all the lower end Campag hubs went to cartridge bearings. The only cup and cone were Chorus and Record, and then later, just Record.
Mick F. Cornwall
Top

I found the following on a US forum:

"Re: Replacing bearings in Campy 1999 nine speed freehub
I know it's slightly perverse answering your own question on usenet,
but I figured it may be a useful thing to have in the archives for
future reference.
>From Peter's advice, I figured there was no way I was going to find a
replacement freehub assembly, so I endeavoured to fix the one I had.
Taking the outer cartridge bearing out is simple. All one needs to do
is tap the freehub on a bench, and the outer (24mm OD, 12mm ID, 6mm
thick - SKF 61901) bearing pops out, followed by a spacer.
Next, after a thorough scrub, if you look carefully inside the
assembly, you'll see a c-clip holding the inner bearings in. I had to
make a special tool to get this out, that resembles a small screwdriver
bent at 90 degrees a few millimetres from the tip. It's a little
tricky, but once you get one side of the c-clip out of it's groove, you
slip the pick tool underneath, and then you can pop it out.
Once that's done, the remaining two cartridge bearings (21mm OD, 12mm
ID, 5mm thick - SKF 61801) can be pressed out from the other side. In
my case though, the inside of the innermost one was broken, so it fell
apart once the middle bearing came out. The only way to get the
outside of the bearing out was a half-hour with a dremel and small
abrasive wheel.
So that's it. A pair of SKF 61801 bearings (with all the seals removed
except the one facing the outside of the freehub) can simply be pressed
in, followed by the c-clip, lots of grease, the spacer, and finally an
SKF 61901 bearing (with it's inner seal removed.
Hope that's of help to someone
Regards,
Suzy (hates throwing stuff out)"

I was looking because my 1997 Veloce 8 speed rear hub was very rough. I found that the outer cone and cup were pitted but also the inner freehub bearing was rough. I was having no luck dismantling the freehub before I read about the circlip in the above post! The circlip is a b*****d to get out! (Maybe I just don't do that sort of thing often enough)

The bearings in my Veloce hube were not the same , but I did manage to find the right ones in the SKF online catalogue. They are 6001RS; 28mm o.d, 12mm i.d and 8mm thick. There are only two in the Veloce hub.

Some more advice / techniques for changing campag freehub bearings and dealing with that circlip...

Thanks. That was very interesting. They seem to have had trouble with the clip going round; mine didn't. Funny how they all behave differently. Also the clip in my hub did have holes at each end for use with circlip pliers which I have ordered, but was too inpatient to wait for.

In the end, I did it with three small screwdrivers. A small jeweller's Philips' in one hole to lever that out of the groove, then a small straight blade to stop it going back and a third with a small right angle bend (bodged and filed myself) to work round the circumference, until enough was out of the groove to pull it sideways out of the hub. It was a bit deformed after all that but it did go back into shape with not much persuasion.