For discussions about bikes and equipment.
Post Reply
45 posts

fatboy wrote:So you are a little-endian rather than a big-endian!

For sure. I always prefer a small and elegant solution to one that's large and complex!

A man after my own heart! Glad that we won't wage wars over endianess (as in Gulliver's Travels)!

Mind you does make me realise that I spent ages "improving" my brakes and that any improvement was the emporer's new clothes!
"Marriage is a wonderful invention; but then again so is the bicycle puncture repair kit." - Billy Connolly
Top

I meant a chart like Sheldon does for shifter/cassette compatiblity.
Top

sorry, its beyond me.
Chris, I've read your explanation (many times!) and I can now follow it...just. It gives the MA of the whole canti, taking into account the various things that influence the MA...all the important lengths and angles.

On the other hand I think Sheldon (and the stuff snibgo linked ?) is considering the MA in sections, rather than dealing with the whole brake in one go.
I think this "1/sin yoke angle" is supposed to be a component of the MA which derives solely from the straddle wire itself, and I am interested in finding out the effects of yoke angle (straddle height) on the brakes performance....it is something we can control, the other stuff is pretty well set by the manufacturers, all we can change is to vary the spacers behind the blocks. Then I have "raised" the centre of the straddle yoke 10mm, and using compasses, have drawn where the straddle anchor would move to. (moving it in a straight line, ignoring that it actually moves in an arc)..This is a list of the total movement of the straddle anchors (ie left plus right) for a 10mm raise of the yoke for each yoke angle, and Sheldon's MA figure;

**Probably can't actually be used in a working brake, even with the barrel adjuster in the straddle rather than the main cable?
Bike fitting D.I.Y. .....http://wheel-easy.org.uk/wp-content/uploads/bike-set-up-2017a.pdf
Tracks in the Dales etc...http://www.flickr.com/photos/52358536@N06/collections/
Top

I just play around with the circleacycles website linked earlier (but here it is again if you want) which makes much more sense to me.

I can't get my head around just changing one item individually since it's a whole system. For example, just dropping the straddle wire without touching anything else drops the brake arms further apart. So then you bring them back in again, which changes the system once again.
Top

Another difference is that you have taken a rise of 10mm. This changes the yoke angle substantially, so you should take the angle to be somewhere between the start and end values. Or you could measure a much smaller rise, eg 1mm, but then measurements are trickier.

The rest of the difference gets mathematical.

MA can be calculated in a number of ways. The PDF paper in the animated page I linked to gives one expression:

To simplify, we take measurements when the blocks are touching the rims, and we pretend that nothing moves after that -- the blocks don't compress, etc.

In your pencil exercise, you assume the straddle anchors move horizontally. This assumption is useful, because it makes PA and DO equal (and both are infinite), so they cancel.

So the expression becomes:

So the expression is:

I have crudely added 2.5 degrees to each measurement to account for the yoke angle changing when you raise by 10mm.

Another point worth making: small yoke angles give large MAs, as we know. They also result in large forces in the straddle wire, by a factor of 1 / sin yoke_angle.

My brake lever has an MA of about 10:1, so squeezing with 1 kgf tensions the main cable with 10 kgf.

For a yoke angle of 5 degrees, 1 / sin yoke_angle = 11.5, so the straddle cable will experience a tension of 115 kgf. This is nearly twice my bodyweight. Good thing the cable is strong!
Top

Come on you mathematicians - all we need is a graph showing the brake cable movement by the brake lever (ie distance the straddle rises) verses the brake block movement at the rim for different straddle heights (angles). 3 items which should be easy to represent graphically

. (i know this ignores friction but is a good starting point).

At the end of the day the MA is the ratio between how much the brake cable moves towards the lever and how far the brake blocks move towards the rim.

That's more or less what http://www.circleacycles.com/cantilevers/ provides: a graph of the MA of the brakes (but ignoring the brake lever) versus the yoke height.
Top

rjb wrote:Come on you mathematicians - all we need is a graph showing the brake cable movement by the brake lever (ie distance the straddle rises) verses the brake block movement at the rim for different straddle heights (angles).

Unfortunately it is not that easy. The straddle cannot be considered in isolation. The geometry of the straddle has more or less influence upon the MA of the brake depending upon the height of the arms. With horizontal arms it has no influence at all and MA becomes purely a function of arm length versus height of rim above braze-on.

Sheldon's table of MA versus straddle angle applies only to one specific layout of brake, with arms of a certain length, raised at a certain angle.

If you want an easy way to calculate the MA of a brake, you can either use the internet and circle cycles, as snibgo suggests, or put a ruler across the heads of your brake bolts and see where it's intersected by another straight thing aligned along the straddle. Distance from intersection to the nearer brake bolt = b - or lets give it a more memorable name, lets call it straddle distance. They say a picture's worth a thousand words so here you go: 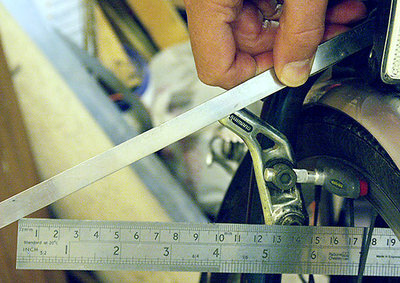 Divide straddle distance by twice the height from ruler to brake block centre (usually about 25mm nowadays, so divide by 50) and you have your MA. In this case 140/50 = 2.8.

Chris Juden (at home and not asleep)
Top

The mechanical advantage is concentrated in the V-brake rather than the brake lever, which means that the spongyness due to cable stretch and outer compression is reduced. Altogether a better experience!

I have Tektro RX5 mini V's and Tektro RL340 levers, which are hugely powerful, but not overly squidgy.

531colin wrote:it seems to me you can get an MA out of just the straddle wire, if the yoke angle is kept very small

I use mini v's and the correct levers on one bike and just don't like the feel. I'll chuck in the looks. [inappropriate word removed] and black. They also don't open as far , in fact I find that the long blocks foul the forks which stops them opening to far. Not good with whopping great tyres. Currently my ancient Weinmann/Mafc style cantis with Ergo power evers are nicer to use than the above V set up.
Top

I think we should be able to do better than "straddle distance"......how about calling it the CJ line (like Siegfried line?)....(or meridian...axis..)
....and calling the whole idea CJ's rule

For anybody like me with a longstanding obsession with cantilever brakes, to see all the mysteries explained by 2 carefully placed steel rules is quite something.

This is exactly the kind of applied mathematics problem I need to keep my 12 YO son interested in maths - nothing he's been getting at school seems to be stretching him at all.
It's tough staying ahead of him - it won't be very long before He's trying to explain stuff to me that I can't understand

and the only thing he got "wrong" was calling them "back-squares" instead, which makes pretty good sense if you've never even heard of them.
Heck, they'd only mentioned in passing what a square number is at that stage in school, and his mind ran away with the concept.

While I'm at it, I might ask him what length spokes I need for my new wheels

Cyclenut wrote:
If you want an easy way to calculate the MA of a brake put a ruler across the heads of your brake bolts and see where it's intersected by another straight thing aligned along the straddle. Distance from intersection to the nearer brake bolt = b - or lets give it a more memorable name, lets call it straddle distance. They say a picture's worth a thousand words so here you go:
CantiMA.jpg
Divide straddle distance by twice the height from ruler to brake block centre (usually about 25mm nowadays, so divide by 50) and you have your MA. In this case 140/50 = 2.8.

I can now see how the MA decreases slightly as the blocks approach the rims, and why i have set up the cantilevers on my tandem with a low MA to increase stopping power