Difference in performance over 24 hours

For discussions about bikes and equipment.
Post Reply
39 posts

Difference in performance over 24 hours

I'll try and keep this short and simple.

My bike is an 8 year old Marin Lucas Valley, shimano sora, thin tyres. The bike is too small it's a 56 inch frame and im 6'2. I'm used to the bike and comfortable on it. I cycled for 3 weeks from London to Rome 2 summers ago no probs.

I have been thinking about getting a new bike, something flashy, carbon maybe, drop handle bars etc and the right size! Equally I've been thinking "what difference will it actually make"?

So there are a few questions there I suppose. Does having a bike which has too small a frame not designed as a racer hamper my ability to cycle to Paris in 24 hours. and if so by how much and why? I can certainly get the seat high enough but is there another elemnet to the bike/body geometry and how much faster would I do it if I was riding a perfectly fitted carbon race bike?
Top

I would say that you have asked two different questions rolled into one.

Q1, will it make a difference if the bike is poorly fitted/sized? Yes a big difference.

Q2, will a nice new Carbon framed bike make the ride much easier? No, not really but it may make you happy owning it.

I suspect the main difference would come from your posture. For example, at 30 km/h, changing from the hoods to the drops will give you around 10% extra speed (or 25% less effort for the same speed).
Top

If you've been comfortable on the existing bike for long distances then it works for you and comfort isn't the issue. The issue is possibly whether the riding position on it (your post implies it's a flat-bar bike...?) is going to be a bit of a disadvantage if you're trying to do L-P in 24 hours (though if there are four of you then you can make a pace line, and your mates will be happy if you have a derny-like posture

). Drop bars and a lower position make you more aerodynamic, which makes life easier and faster, but it can take quite a long time to adapt to a lower position. Will the other aspects of a posh new bike (lightness, stiffness, wheels, geometry etc) make you faster too? Quite possibly - I certainly find I go faster on one of mine than another despite them having virtually identical positions and geometry - though it won't be a massive difference.

So my thought is that yes, you may be (a little) better off with a lighter, faster bike - but be aware that if you're going for a considerably different riding position (and you don't necessarily need to) then you're not leaving much time to become accustomed to it.
Top

The event that you are planning to do is pretty much the same as a 400k Audax.
Except that you are possibly "supported" to an extent that they are not.
So a bike more of an Audax nature is more suitable than a road racer type.

eh?? Its the biggest one they do in this frame type....

In fairness they size their frames like mountain bike frames, not 1950's farm gates, but no, that frame is -for that type of bike- about the right size for you. In fact some people might even say it might be too large and you should have bought a size smaller.

But for you proposed ride, assuming the bike is in good condition, the big factors are wind resistance, rolling resistance, and comfort. Second two (or all three) not necessarily in that order. Bike weight comes a distant fourth. You could buy the lightest bike in the world but if it isn't comfortable and/or you set it up so that your body acts as a sail, you won' go appreciably faster or further.

BTW if you are not used to it, practice riding in a close group (with known / understood protocol) and taking turns at the front; this will massively alter your group speed.

meic wrote:So a bike more of an Audax nature is more suitable than a road racer type.

Arguably so if the OP is planning more stuff like this; arguably not if he isn't. I'd suggest that the only ways (at least the only ones I've encountered so far) in which a lightweight racer is unsuitable for this type of ride are (a) if you're soloing it and need to carry more than you can fit in a jersey pocket and a small bar bag (eg civvies for hotel/return journey) and (b) if you're in a group and it's raining all day and your mates would prefer you to have proper mudguards.
Top

I agree that such bikes are not unsuitable and if you want/have a racer then it will do the job.

I just think the other type is more suitable and probably over 80% of the bikes ridden on 400k Audax will be that type and not just for the small amount of extra gear needed when unsupported.

In my experience, it WILL be raining and the mudguards are not just for THEIR benefit.

Also what Brucey said about the benefits of team riding may make the mudguards part of being part of the team, unless of course the team has chosen to go for the no mudguard option.
Yma o Hyd
Top

meic wrote:In my experience, it WILL be raining

Oh good, it's not just me then

Ok thanks all, overall I feel fairly reassured that its not mad to attempt it on the bike I have. The key disadvanatge would seem to be not having drop bars when I'm leading the peloton.

Having said that I've never ridden a racing bike so maybe I don't know what I'm missing out on!
Top

Height is only a very rough guide to the size of bike you need: you can have a long body and short legs or v.v. Your comfort on the bike depends more on its length than its height. Basic rule is don't change a winning team, but it might be interesting to get yourself professionally measured all the same.

Drop bars will make a big difference to aerodynamics. They'll also roll you forwards on the saddle a bit, so be prepared for a change of pressure points.

And if you fit Raceblades, even just at the rear, and persuade your mates to do it too, your nostrils will love you. Here's poor old Anne getting a faceful: 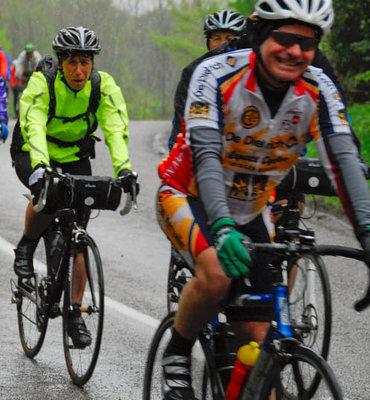 I am not recommending it but you could consider fitting aero-bars or whatever they are called onto your handlebars. They would be invaluable if fighting a headwind on your own.
A bit dangerous in the middle of a crowd though, i am told.
Yma o Hyd
Top

Brucey wrote:BTW if you are not used to it, practice riding in a close group (with known / understood protocol) and taking turns at the front; this will massively alter your group speed.

at the risking of hijacking my own thread what do you mean by known/understood protocol and what is best practice for 4 riders, is there an optimum time at the front before rotating?
Top

meic wrote:I am not recommending it but you could consider fitting aero-bars or whatever they are called onto your handlebars. They would be invaluable if fighting a headwind on your own.
A bit dangerous in the middle of a crowd though, i am told.

drop bars most normal riding you would be on the hoods or the bar tops. The only time people usually drop to the bottoms is for streamlining down hill, unless of course you are racing. you'll be fine on straight bars If you want the advantage of more hand positions,why not add a set of bar ends, A Dutch friend of mine has these inboard of the grips and controls to help with stream lining, something I've never done but thought what a brilliant idea.
NUKe
_____________________________________
Top
Post Reply
39 posts