SRAM A2 Automatix; introduction to the internals

Thank you for your help again.

by Col18
Hi
Another update....
Today this piece has come loose on my cycle to work.
I've knocked it back in. Seems fine.

by Brucey
not to worry you but this may just be because the dustcap is/was a slightly loose fit (did you remove it before?) but it may also signify that the clipped balls are starting to misbehave in that bearing.

In the latter case if the clip starts to break up it can seriously damage or even wreck the hub. Once a bearing has become slightly corroded breakage of the clip is more likely.

It is better to use loose balls in a bearing of this sort (rather than a clip) but in many cases there is enough room for the balls to escape (into the internal mechanism of the hub which will definitely break it) which makes reassembly much more tricky. I don't recall if there is this kind of problem with this hub or not tbh.

by Col18
Thanks for the reply.
I didn't take this off when I did the adjustment.
I don't remember this getting loose, always stuck there, when the shoulder was off.
Will keep me eye on this.
I'll have to be careful when washing the bike now as water could easily get into the hub.

by mig
i was going to have a lash at commuting with one of these hubs some time ago. i'm mostly glad that i stuck with an old fixed hub as these look a little weak in the execution.

where do you ride? somewhere really chalky?

by Col18
The hub is on an ebike with pedal assist only. Commuting 2-3 times a week, through winter and through rain sometimes.

Before the spring adjustment, carried out 2 weeks ago; the hub has been fine.
But as mentioned the gear change setting is low, so even on a 4% slope/hill, it will still be in the higher gear; can and can be a slight strain on the legs.

My commute is mainly flat with 4 short 4-7% slopes. Ride half road and half canal tow paths over 11 miles.
Bought the bike due to price and simplicity; and to ride without getting to sweaty.

It's only since carrying out the spring adjustment that these issues have occurred. But with the adjustment, on the few slopes it is easier on the legs.
The motor pushes me with me pedaling at 12-13mph on the hill, the the springs adjustment make the gear change at 13/14mph, so this is now ideal.

by Brucey
I recently got a well-used brakeless Automatix from a fellow forum member, who had used it for commuting on. I have been assessing it carefully since it has done more miles and seen more weather than I might have subjected it to.

The bearings were slightly worn and the (plated steel) hubshell had become somewhat tarnished; road salt is very unkind to such things. I dismantled the hub and it was clear that some water had penetrated the bearings. However since it had presumably been used regularly, the wear that had resulted was very uniform. Thus although the ball clips are worn (and ideally ought to be replaced) the hub isn't wrecked.

I got stuck in yesterday and repainted the tarnished parts of the hubshell (etch primed first, rattle can colour after) and even built & tensioned the wheel too, using parts I had kicking about. I went for a black 700x19C rim and a gloss black hubshell, with polished stainless steel spokes and spoke washers. Because I had masked off the decal on the hub before I painted it, the ends result looks pretty smart, even if I do say so myself. [I would expect this finish can perhaps later be 'maintained', even in winter grot, by strategic applications of black waxoyl.] 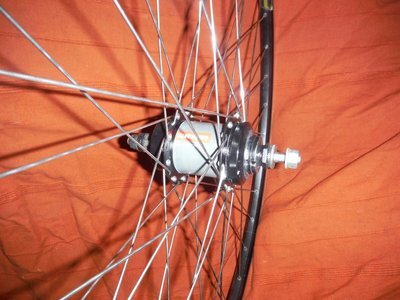 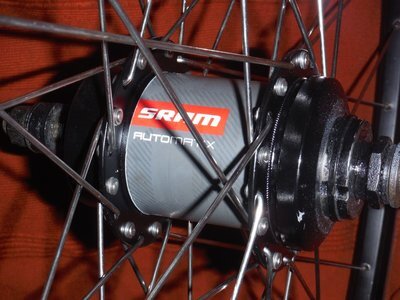 The hub had responded to my fettling and actually turns very smoothly now. I also swapped one of the two 22mm locknuts to the RH side of the hub which means that only one 22mm cone spanner is required to adjust the hub bearings now (what were they thinking of...?). However without a lube port fitted it will have to come apart (partially at least) to get any fresh lube into it, and with the LH ball clip in that condition, it is v.tricky to reassemble it without balls escaping. But I'll be able to at least try it, and if I can source the right ball clip and/or fit a lube port, maybe it'll live again.

Fitting a lube port isn't likely to be easy; the hubshell is hardened steel and can't be drilled readily. There is no good access or place to drill at the ends of the hub either. The easiest way to get lube into the hub seems to be to hold the LH end of the axle in a bench vice, remove the RH cone, and then add oil/ SFG before replacing the cone. However with a worn ball clip in the LHS of the hub, if the wheel is even slightly disturbed, balls can try and escape from the LH ball clip with predictable consequences. Because the hub lacks labyrinth or contact seals on the main bearings (there is at least a dust shield on the ring bearing) it will need more attention than (say) a SA AW hub would.

Possibly the aluminium shelled version if this hub would be easier to install a lube port in. The LH hub bearing and hubshell in this steel shelled rim brake model are essentially built the same way as they are in the coaster brake version, i.e. the LH hub bearing is another ring bearing with no real sealing, just a dust shield over it. Possibly a coaster brake internal will fit inside this rim-braked shell (this is true of quite a few SRAM IGH models). Possibly better seal can be used on the RH hub bearing and maybe there will be a cunning method of incorporating a lube port within it; we'll see.

by bri7800
I see SA now make an automatic 2 speed hub gear. It's also called the A2 or A2k for disc brake fitting.

Is that automatic or back-pedal shifting?

As far as I can tell it's automatic. The kick shift 2 speed is called the S2.

by Brucey
these hubs are so new that they don't yet appear on SA's website.

They don't say how the gears are organised but my guess is that it gears up like the S2 hub and the SRAM A2 do, so ratios of 1.00 and 1.37, i.e. the internals are the same as the S2 but the shift control is different; I wonder if they have acquired the tooling and/or the rights to make the SRAM A2 shift control parts?

The A2 hub weighs 980g and the A2K hub weighs 1108g. This means they are fractionally lighter and fractionally heavier respectively than the listed weights of the comparable SRF3 and SRK3 three speed models.

The A2 hub is reviewed in A-to-B magazine, but I have not read the review. They say that it 'suits 16" wheels' which means that unless the shift point is adjustable, the hub will not be very suitable for other larger wheel sizes. That is, not very suitable twice over, arguably; once because of the shift point and again because of the gear ratios. It would be better (for larger wheels) if the gear ratios were organised as ~0.75 and 1.00. The old sturmey TF was like this, as was the short-lived Sturmey S2 hub of the 1960s.

by fastpedaller
Nice work on the SRAM Automatix there Brucey.
I understand your comment re the change up being less than great for a large wheel bike - I guess because the change occurs for a given hub RPM rather than road speed, so will occur at an undesirably low RPM of the cranks if the bike had large wheels. I can't, however, see what difference the change ratio makes, because (for example) a 60 inch first gear will gear up to a 82 inch second gear irrespective of wheel size - or have I misunderstood?

by Brucey
well there's three things really, about the 'gear up' being the wrong choice for a large wheeled bike (even if it makes some sense for a small wheeler);

1) if you have a singlespeed bike already, a 0.75/1.0 hub is a straight swap for the usual singlespeed wheel; the sprocket size is the same and the chain length will be too. However a 1.0/1.37 won't be.
2) the use of the 'gear up' high gear results in an overall lower efficiency in the usual duty cycle (which is typically likely to be running about x3 or x4 more in the high gear than the low, if the low gear is set for climbing)
3) Highly subjective this but to get the gear I want results in a monumentally ugly transmission IMHO. If I want the same high gear as (say) an 18T sprocket would normally give me, I have to use a 24T sprocket with the same chainring. Bleugh.

All the hub knows is how fast it is turning, so this means different shift points (in terms of road speed) with wheel size. SRAM made two different versions of their A2, one for small wheels and one for larger ones with different shift points. Even the difference between a 16" wheel and a 20" wheel is 25% , which is massive, so it is unlikely to be 'right' for both wheel sizes.
In fact it is worse even than that; even if the shift point is about right, if you vary your gearing by 10% then the effect of this is that the shift point cadence varies by 10%, which can drive you crackers.

I have not used a SRAM A2 hub without wanting to adjust the shift point in it; I don't imagine that the SA one will be any different to that, lets just hope that it is adjustable.

by Brucey
I don't understand how your calculation is meant to work.

The simplest way to think about it is that when the planet cage does one turn around a static sun, the ring gear (with Nr teeth) does one turn plus however many teeth are on the sun pinion (Nr), or an additional Ns/Nr turns. In this case the ratio is therefore

you will note that (perhaps counterintuitively) the number of teeth on the planet pinions does not affect the gear ratio in a simple planetary gear train. However it does come into the calculation whenever there is a stepped planet gear involved; where there is normally the term Ns/Nr there is instead a term which also includes the ratio of the step sizes on the planet gear, i.e. this term (Ns.Npr)/(Nr.Nps) where Npr = teeth on planet in mesh with the ring gear and Nps = teeth on planet in mesh with the sun pinion.

So the formula for a planetary gear with stepped planets is