For discussions about bikes and equipment.
Post Reply
773 posts

I have just returned my alfine 11 hub to the shop i bought my Genesis ioid from as gears were slipping and gear 6 was almost unusable. it was returned to shimano and the internals were replaced as a gesture of goodwill, they claimed that when it was serviced the wrong type of grease was used (they said alfine 8 grease was used) and this caused all the problems. Is the alfine 11 really this sensitive to the type of grease?
Top

Mpolo wrote:I have just returned my alfine 11 hub to the shop i bought my Genesis ioid from as gears were slipping and gear 6 was almost unusable. it was returned to shimano and the internals were replaced as a gesture of goodwill, they claimed that when it was serviced the wrong type of grease was used (they said alfine 8 grease was used) and this caused all the problems. Is the alfine 11 really this sensitive to the type of grease?

Well the Alfine 11 is supposed to be lubricated with oil so probably ...
Top

oddly enough the test for grease consistency is essentially a measure of how far something will penetrate into the grease under a small force. This is remarkably similar to, say, what happens when a spring loaded pawl must push grease aside before it will engage; a common event in the operation of an IGH.

Generally mechanisms that can use an average quality grease can also use oil instead, provided it is the right oil and it doesn't escape from the mechanism in use. However a mechanism designed for oil may not work correctly at all when lubricated with grease; you may as well be putting glue inside in some cases.

I have my Alfine 11 in bits spread around the bench after it lost drive completely. It's just over two years old & has done ~ 1500miles of mainly off-roading with 32 - 20 gearing on a 26" wheel bike. the failure is not in the epicyclic gearing end of the hub as shown so nicely by jb above, but at the other end of the main axle. The permanently fixed sun gear on the furthest rhs is held on with a circlip that, due to the selector having to pass through, is semi-circular with turned in ends that sit into holes in the axle to prevent the clip from turning. The smaller of the ears on the axle that the circilp holes are drilled has failed - wall thickness left after drilling seems woefully inadequate - resulting in the circlip breaking in two & the sun gear has moved to the right, hit the dog clutch & prevented it from engaging so drive is lost. I have worked out a repair that I think will retain the sun gear, but the dog clutch spiral springs & related components were all burst apart & despite spending several hours trying to work out how it all goes together, I have come to a dead end. The two springs were obviously wound in opposite directions with some considerable tension, has anyone successfully rebuilt this end of the internals & if so can you post any pics or info' on how to get it all back together please. Or has anyone got a hub with damaged pawls etc - mine are all in good condition - we could make one good one out of the relics of two dead ones?
Top

I have retensioned the (shift control) springs in a Nexus 8 and it was fairly horrible. I think it will have been easier than the same job on an Alfine 11 though. I believe the principle is similar, but I've not done it on an A11 hub.

IIRC the axle assy should be available as a spare part; number 14 here;

http://forums.mtbr.com/internal-gear-hubs/alfine-11-snuff-pics-696480.html but I guess you know all that already.

Changed oil tonight - quick easy job; didn't bother flushing (what came out didn't look all that bad) 25ml of greyish brown "rock oil" light transmission fluid came out (actually about 27ml did....) and 25ml sparkly new yellow oil went back in. Looks like I'll be using the bike for a bit so I'd better change the tyres too - they now have a pronounced flat round the circumfrence due to wear, sure sign I'm on borrowed time....
Top

Evesie wrote: The two springs were obviously wound in opposite directions with some considerable tension,

The A11 is a top normal type, the cassette joint works cw. Maybe the springs are working just in the opposite to the N8, so shift spring is tensioned cw.

If you can add good pics of the (about 11) parts (incl. 2 springs) we can try to assemble it

(do not want to disassemble an A11 completely. Driver plate is already off)

which code does your A11 have?
My A11 (JKxyz) has two holes for the two springs in the carier hold plate
Top

after having stripped down two A11 (and some N8) I am not really surprised, that some A11 have problems with shifting. The pawl actuator, imho one of the most important parts for exact shifting, is made very roughly, die-cut, bent and ? What about tolerances?
And comparing that one of the A11 with the actuator of the Nexus 8 it is longer and pretty slender. There is not a really exact guidance.
And pawl 1 seems to be the most affected.

At the A11 everything seems to be made for less weight.

And yes, there is place for a 4th pawl (in the future?) 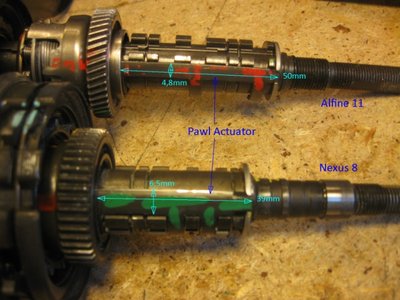 in fairness the pawl actuator shouldn't ever see huge loads (the shift control springs should protect the actuator from shifter-imposed loading, at least that is what they are meant to do...?) and not all pawls see the same service loading or indeed the same frequency of use.

My take on it is that fitting 11 discrete shift positions into about 150 degrees of shifter movement is a Big Ask; the tolerance to misalignment in an N8 hub is very small and in an A11 it is surely even smaller.

The issue is that when the adjustment is just slightly off, the pawl cannot lift fully. The hub might seem to drive OK at first but in reality if the pawls don't lift fully the gear will sooner or later slip, as sure as eggs is eggs.

I've even seen hubs where the drive between the cassette joint and the hub has worn somehow; this is potentially fatal because accurate gear adjustment is then impossible to determine. All you can do is to check the pawl lift with the bare axle assembled with the cassette joint on it, and see if the marks are still accurate or not.

Whisper it, but the Sturmey Archer rotary shift design is potentially better, in that it allows a full turn of the cassette joint and this allows the hub to be designed with a bigger tolerance on shift cable setting. The penalty for this is that you have an additional bearing race in the RHS of the hub, but this doesn't seem like a show-stopper to me.

How have Rohloff managed to make a 14speed that is generally considered to be reliable but Shimano have failed with 11?
"Marriage is a wonderful invention; but then again so is the bicycle puncture repair kit." - Billy Connolly
Top

Maybe because they are not making it down to a price?
Top

Brucey wrote:The issue is that when the adjustment is just slightly off, the pawl cannot lift fully. The hub might seem to drive OK at first but in reality if the pawls don't lift fully the gear will sooner or later slip, as sure as eggs is eggs.
...
All you can do is to check the pawl lift with the bare axle assembled with the cassette joint on it, and see if the marks are still accurate or not.

As a consequence of the "not fully lifted pawls", testing the bare axle units with the 3 sungears and the CJ on it, I found problems for the pawl actuator at some positions to get the pawls completely in. At both of my axle units in gear 4, the sungear 3 touches the pawl slightly, which means little, but noticable drag, when turning the sungear with two fingers.
If I adjust to get it clear, there are slight contacts in different gears with different sungears.
That need not cause shifting problems, I drove one of the two A11 nearly without shifting issues, but it could mean wear.

I am talking about my two A11, others could be perfect or...
Top

There is basically too many gears for the selector method chosen. Were the whole assembly precision machine cut rather than pressed and bent out of flat plate they could get away with it. As it is, as alluded to above, there can be slight differences and its luck of the draw as to how well it works, or whether it will bed in better or worse.
For commuting I shouldn't think most people will notice it, its only if your pounding up hills on long rides that it can be annoying to have a gear slip.
Cheers
J Bro
Top

As an owner of two Alfine 11 speed powered bikes, this has been an interesting read - some of which has been a little scary!

I don't have much to add, other than to say I really like using mine. I was brought up on Sturmey 3 speeds so have always treated internal hub-gears with kid-gloves, so mine don't get hammered - I find mine stay in tune for ages, the trigger shift system is quick and efficient and I'm a fan of the near silent operation.

Mechanichally, both have performed flawlessly. One unit is now on 3500 miles plus - although, when new, it (occasionally) dripped tiny amounts of oil on hot days - rectified by replacing the 'Right Hand Dust Cap A w/Seal'. The other (attached to a Dawes Nomad I bought from here) is coming up to 800 miles - all good so far.

The initial oil-change was as recommended - drain, flush, replace - but subsequent changes, albeit a shorter intervals, have just been that - drain, replace.
Top
Post Reply
773 posts