For discussions about bikes and equipment.
Post Reply
781 posts

TL-AF10 is what you need to unscrew the RH dustcap. It is on a LH thread.

Brucey wrote:TL-AF10 is what you need to unscrew the RH dustcap. It is on a LH thread.

Isn’t the RH dustcap just hand tight on A11 like on A8?
Top

oftentimes you need the tool (or a tool) to unscrew them.

If it was supposed to be hand tight it would be knurled for hands to grip. As it is its smooth with recesses for the correct tool.
Its job is to stop oil getting out the A8 is grease...
Cheers
J Bro
Top

After removing, cleaning, and putting the Gates sprocket back in place, there's much less creaking when riding… but I can still hear some, and sometimes, it sounds like metal against metal. Maybe the LHS bearing also needs to be replaced.
Top

I have a couple of questions as I'm about to order the parts + tools needed to service the Alfine 11:

1. Besides the three "ball retainers" (parts 13, 18, and 36), what other parts are likely to be worn after years of use? Since parts are cheap, I might as well order them all now.

2. Is there a document that explains how to use the TL-S702 "Right Hand Cone Installation Tool" and the TL-S704 "Seal Set Tool"? 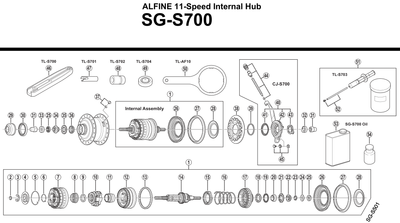 Wondering if anyone could offer any suggestions as to my Di2 Alfine 11 problem....

After taking apart (as far as parts 7 to 13 off the shaft) , cleaning and reassembling -
I now get a drive gap shifting up from 6 to 7 and down from 8 to 7 (and possibly 3 down to 2).
i.e. shifting under normal partial load, drive 'goes' and the pedals rotate perhaps half a turn before I get any drive again.

Now to admit to the small accident with part 7, (aka Carrier unit 3 / Y37R98020 )
I think the inner roller clutch of part 7 [RC3 on https://www.sheldonbrown.com/alfine-11.html#details moved enough it was able to slip over its peaks/trough bits the wrong way and the coil (return) spring pushed out through the shell hole, caught a planet gear and got partly yanked out and stretched, (the first time I reassembled and was hand turning it)
In trying to work out astonishing had happened, before I did, I removed the large metal circular bands 5 and 6 releasing the sun pinion 8 (but not the planets). 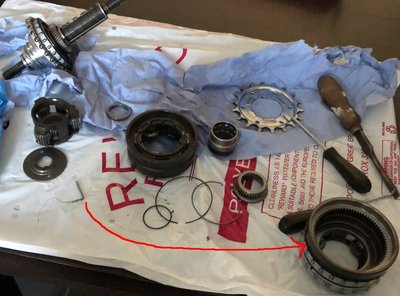 a) So the upshot was I straightened the spring out a bit and instead of being an inch was about 4 inches long now. However by simply turning RC3 around over the peak/troughs about a third of a turn made the distance between the spring attachment points (one end of spring in the indent in the side of the RC's body and the other the hole in the shell) enough the spring would go back ok and set it with very slightly more tension than the other RC's springs seem to have, assuming if anything it was likely to stretch out a bit over time. (The spring sites in a channel between the little rollers and a large ring clip so still performed fine as it cant escape or move)
b) I just dropped the sun pinion 8 back in any position and the two ring clips 5 and 6 wherever , and the retainer cap 4 with one clip bent end in at the top and one bent end at the bottom (its a two hole type). AFAIK there is no alignment needed here?

In summary, as far as I understand
- if no planet gears have been removed and
a) above, relative position of the clutch ring (RC3) doesn't matter and
b) above, positioning of those parts doesn't matter
...it should just work??

(Before anyone asks, there are no funny noises, done 40 miles on it since, gears all ok apart from the dead space)?

Any suggestions welcome!! Thanks!
Top

IIRC if you remove the sun pinion from an assembly that uses stepped planet pinions, there is a pretty good chance that when the assembly is remade, the ring gear won't sit on the planet pinions properly. The planet gears need to be aligned with one another so that they are all 'timed' the same. If you look at the reassembly instructions for a Sturmey-Archer 5s hub, it describes the procedure; shimano pinions are marked in a similar way.

I've never assembled an alfine hub with mistimed planet pinions, so I don't know what will happen exactly. But the ring gear won't be perfectly concentric with the rest of the hub any more, which means that RC4 won't be concentric with the hub or with neighbouring RC3; engagement of one or both is liable to be poor as a consequence.

Anyway I'd check that first; there may be another fault with another part too, but this may not reveal itself in the presence of the first fault if that exists.

Hi Bruce, Thanks for your reply, the planet gears are all aligned as they haven't been removed (just double checked on the hard to see dots on their inside) - they still mesh with an outer ring (with teeth on inside) as well as the sun pinion.

the markings are usually on the planet gears somewhere. If the phase of the three planet gears is not identical, often it will still go together, you won't necessarily see that there is problem, but the hub won't work properly. The reason it doesn't work properly is that if the phase is wrong, the load on the ring gear cannot be shared between three planet gears at the same time [img]and[/img] remain concentric. A really big phase difference and you won't be able to fit the ring gear and the sun pinion at the same time; a smaller error will look and feel fine until you go to use the hub, whereupon it just won't work properly.

The usual way of retaining the correct planet gear phase in a shimano hub is to keep a sun gear in mesh at all times, i.e. so that the sun and the planets are a subassembly. If you want to retain the planet gear timing, you can fit the ring gear whilst you remove the sun pinion; this also retains the planet timing.

Anyway I marked the sun pinion and tried it +/- one tooth difference to the planets and it makes no difference. I then started changing positions of the spring clips and holder plate (4)(5)(6) and again makes no difference. AFAIK this makes sense as they are not indexed in any way and are on the shimano diagram as separate parts. (All the bits that alignment matters are counted as one whole unit on the diagram, presumably, (7),(10), (12), (14).)

Anyway eventually came to conclusion the problem was before this cassette unit 3 (4,5,6,7,8) as observed the slack time just once without anything moving at this end of the hub. So on further disassembly and more fiddling turned out to be the spring was detached in roller clutch 2 [see pic] , which I thought I had already checked. It is fairly easy to remove the spring clip and reattach the spring which luckily hadn't snagged and got stretched.
After reattaching that it now all works fine again 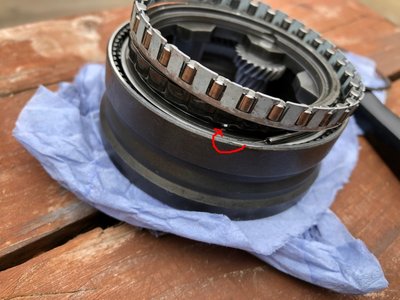 So if anyone is trawling through this thread, please handle the roller clutches carefully as they easily move the wrong way when outside the hub, especially RC3 in (7) !

Incidentally Di2 A11 is miles better than the cable pull variety (suffered for several years with A11 and Versa shifters) and also this doesn't leak oil like the cable pull one did. It is still by no means perfect though....
Last edited by richud on 7 Apr 2019, 5:04pm, edited 1 time in total.
Top

glad you have got it sorted out.

Just to be clear moving the sun pinion around won't change anything; it is the timing of stepped planet gears to one another which is the important thing.

If you always keep stepped planets in mesh with either the ring gear or the sun pinion, you can't go wrong.

Hi Bruce, ok thanks for clarifying that - that is what I thought but your post and point '11' on page 25 made me start having second thoughts!!
Cheers, Rich
Top

So I managed to tear the centerlock disk mount clean off the shell of a first type S700. I used a pretty heavy duty DH 180mm rotor mounted via an Ashima centerlock adapter. I'll have to find someone to weld that bit back on the shell; from the looks of it, there wasn't much material keeping it on the shell to begin with. I remember reading somewhere of a similar case and that it had been solved with newer hubs' shells. "Never thought this could happen to me" sort of scenario, it felt particularly funny to squeeze the brake lever and have absolutely no braking action happening.

Does anyone have any clue as to the material the shell is made from? Looks like mild steel to me but what do I know. I'm pretty sure it can be welded back but it will be hard to maintain the gap(channel) between the centerlock spline and the rest of the shell, that space is taken by the rotor/adaptor spline and there is very little real estate to work with where that bit attaches onto the shell.
Top
Post Reply
781 posts