I know a physio who is also a keen triathlete, and she claims that SPDs mess up knees and recommends Speedplays...

by Brucey
I am no expert on knees per se, but I think that any pedal that does not have unconstrained cleat play (in twist, i.e., float) can cause knee problems if the cleats are not fitted correctly, if they don't have enough float, or if the release is simply set too tight.

A big problem with SPDs (never mind SPD-Rs etc) is that the cleat tends to go back to exactly the same place as before if the cleat bolts have been tightened even once on any given shoe. The reason for this is the the cleats are very 'toothy' on the back and the cleat always tends to settle back in the same place once they have made holes. It is a real problem.

The cleats that are normally supplied with SPD pedals have a few degrees of float. This is enough for most cyclists, if the cleats are fitted correctly. Many are not, and a rider will often have a lot of unused float in one direction, but any movement in the other direction is immediately against the release. The pressure often causes problems, and it is usually in the knee.

By contrast speedplays are almost idiot-proof in this regard. However, some riders don't like them because the free twisting movement makes it feel as if the foot is not secure. Possibly it isn't, either, under the most extreme circumstances. The same sensation also causes some riders to tighten their SPD bindings as tight as possible, and/or fit cleats with no float. Both can cause knee troubles.

A small amount of cleat grinding can increase the float in SPD pedals if necessary. This is well worthwhile if the cleat needs to be moved a small amount, since such small adjustments are exactly the ones which are most difficult once the cleat has settled.

Another thing to be wary of is mixing and matching Shimano SPD parts with clone pedals and/or cleats. This can affect both float and release, often in unexpected ways. Shimano have held various patents and copyrights on their SPD system, which means that other people's 'SPD compatible' shoes, cleats and pedals are unlikely to be identical. A lot of knock-off versions have no float when the knock-off cleats are used in the matching pedals, and may (or may not) function better with genuine SPD cleats in the same pedals.

I suspect that any physio seeing cyclists may well see a lot of people using SPDs and having knee problems; it is easy to set the cleats badly and this will be the result. I think that Speedplay pedals are less likely to cause the same thing. But statistically, even if they treat a hundred SPD victims and don't see a single Speedplay patient, it may prove nothing; there might well be a hundred SPD users for every speedplay pedal user out there.

by Jezrant
not meaning to derail your excellent thread, but just a comment or two more about the SPD/Speedplay issue. I'm sure all of your speculations are right, but it's interesting to see that Speedplays are becoming more widespread in professional and amateur racing. They're also much more common in the States. People who use them say initally the free float feels like your shoes are on ice, but I get the impression that a lot of people switch to Speedplays after having problems or injuries from other systems. I wouldn't think that all of them had their old SPDs or whatever wrongly set up. Of course, the big advantage of SPDs is the relative ease of walking in cycling shoes fitted with SPD cleats. Speedplays look like the worst cleats for walking, although they seem to have some sort of covers a bit like the covers you can fit over Look cleats. Fine for hobbling up to the podium but not much more. Anyway, thanks for posting all that very useful info.

Jezrant wrote: ... People who use them say initally the free float feels like your shoes are on ice, but I get the impression that a lot of people switch to Speedplays after having problems or injuries from other systems. I wouldn't think that all of them had their old SPDs or whatever wrongly set up...

I think you might be surprised how close to the truth this might be; most cleat systems -that require any force to release the cleat- risk a provisional cleat adjustment moving during test/setup, or it becoming a permanent setting because of the 'bite' effect. I see very, very many Look, SPD etc cleats set wrongly.

Also note that there are very many badly made/unsupportive shoes made for SPD fitment vs the three-hole 'road' cleat fittings, too, which doesn't help. Statistically speaking, if you use a road cleat fitment, you are more likely to have supportive shoes, (even if they are no good for walking in etc) thus a whole range of possible problems is immediately made less likely.

Another point to note is the ease of rotation within the float range. Speedplays and SPDs both rotate fairly easily within the float range, at least in part simply because the cleat is small. Systems with larger cleats tend on the whole to rotate less easily IME, and if you are a 'natural twister' this loads up the knee more than otherwise.

by Jezrant
Lots of interesting points, Brucey. Maybe a new thread should be started about how to set up cleats properly since it's a tricky operation and usually entails a certain amount of trial and error to find the optimal position with either SPDs or Look. However, there is a slightly contradictory argument in what you are saying about SPDs. On the one hand, you imply it's easy to set them up wrongly and impossible to correct later because of the teeth, but then you also imply they are better than other systems, if they are set up correctly. How can they be better if so many people set them up incorrectly and then they are almost impossible to fix afterwards? I also have the impression, contrary to your experience, that Look red cleats float more easily than SPDs, and that that float becomes even easier over time as the cleats wear, while SPDs seem to get stickier over time. Interestingly, the physio I know how claims SPDs are bad for the knees advises greasing the cleats each time before going out for a ride to make them float better. Your second point about the less supportive shoes often used with SPDs seems more significant, or at least unquestionably easier to correct, if your theory about the teeth making it almost impossible to reset SPD cleats is right. Anyway, I apologise for this diversion of your very helpful thread.

by Brucey
I've started another thread http://forum.ctc.org.uk/viewtopic.php?f=5&t=70925 to address the inevitable 'which system' debates.

My view (which is clearly stated elsewhere) is that the SPD system is 'good enough' for most people; given its ubiquity and cost, it is a sensible choice.

Greasing SPD (or any) cleats is not a good idea; it isn't necessary (if anything, a squirt of thin lube on the pedal is usually quite sufficient), it attracts dirt, and it makes a mess wherever you walk.

With many systems the ease of float can vary with the shoes as well as the pedal type if there is contact between the shoe and other parts of the pedal. In some cases (including some SPD pedal/shoe combinations) this is unavoidable or intentional. However in other cases this only arises at all or is made worse because of set-up.

I will add further notes re. cleat setting to the original post, [edit; now done] but I would also note that a common clipless setting fault is to put the cleat too far inboard on the shoe. With a small cleat (SPD, Speedplay, Eggbeater) etc this can cause the centre of pressure of the cleat to lie near one edge of the cleat, so that the load is not easily borne by the cleat alone. A lot of SPD pedals are set up like this; such pedals show uneven wear to the cleat and the pedal. Both SPDs and Eggbeaters are now available in designs which allow the load to be spread over a wider area. However this can cause the float action to bind slightly more than it would otherwise.

I note with interest that the cleats shown on Sheldon Brown's web pages (link in original post) are not set at the centre of the shoe. I think that is to allow heel/crank clearance, but the side effect is likely uneven cleat loading and possibly float binding. Cases like this (but worse) may be better addressed using pedal extenders.

by Graham
Any idea which Shimano model are these ones ?? They were fitted to a bike I bought in year 2000.

. . . . best to know what they are before I start mucking them up with the wrong tools. 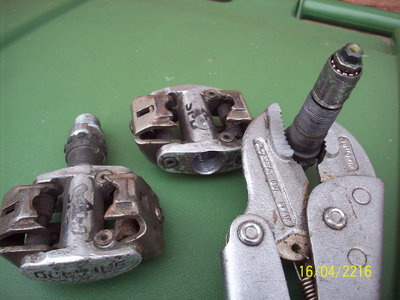 this is identical I think;

can't find EV techdoc, but it looks as if PD-M520 axle units will fit if necessary.

NB need to use SM-SH52 cleats with these pedals, and... I suspect that once worn, the cleats may be more prone to binding in this pedal than some others, but can't be sure.

BTW this is (AFAIK) the only shimano SPD pedal that uses a pivoting front and a pivoting rear jaw; they are quite unusual.

A further thought is that PD-M540 axle units might fit in these pedals, too.

by Graham
Thanks very much Brucey. That is helpful.

I'll now re-read your original post and try to understand the tools and techniques.

PS. I've be using VP cleats on these for years with no obvious problems. It has got me wondering where the original cleats are . . . . still around somewhere !
You are right though - those original cleats didn't seem to work with any other SPD pedals that I had.

I'm in the process of upgrading my bike at the moment. What's the best / lightest SPD's you can get? I have no desire to go to SPD-SL

by Brucey
there is a list of SPD weights on 'weight weenies' site.

BUT... the bearings in many (non-shimano) SPD pedals are a bit variable, so caveat emptor. Many have an IGUS type bushing which is cynically described as a 'sealed bearing'....

A good value lightweight road style SPD is PD-A520; they are usually lighter in weight than advertised....

presumably so as not to hurt the sales of the more expensive PD-A600 model which is a little lighter again.

by Mark1978
Thanks. Those A series pedals look like the sort of thing I'm after!

There is that yes